Admittedly, with The Witness I can see something of their point. After all the years of hushed development and fevered speculation about some groundbreaking, world-changing experience or even a supercharged next-generation Myst, we’ve ended up with a game where you walk around a strange fantasy island, solving maze puzzles on a series of touchscreens. These might start off with simple lines that take you from the start point to the end, before blossoming into a huge range of interesting variants, but you’re still tracing lines around a sequence of touchscreen mazes, then wandering off to find the next sequence, over and over and over again. 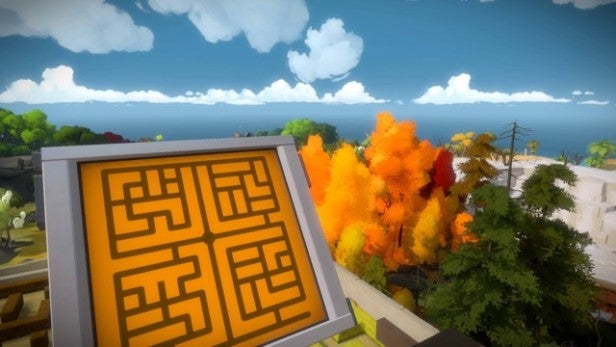 Early on I thought this was a problem, but the more I play The Witness, the more I think that complaining that all you do is solve maze puzzles is much like complaining that all you do in a Mario game is run and jump. It’s not what you’re doing that matters, but how the game develops its mechanics, then goes on to build and test your skills. It’s about how engaging the whole experience becomes.

In The Witness, that experience is weirdly, hideously, obsessively absorbing. Some of that comes down to the game’s island setting and its superb visual and audio design.

Simply exploring is a pleasure, as you uncover new regions, climb the rocky peaks, walk the shimmering coastline and poke your way through mysterious facilities, strange maze-filled castles and abandoned hamlets. The Witness doesn’t go in for photorealism, but its bright colours, complex forms and vibrant vegetation make a world that’s almost hyper-real, and built with a painstaking level of detail.

Everything seems to have been formed and placed with a ludicrous degree of artistry and precision, and in some cases that’s for a reason, the scenery factoring into the puzzles and the puzzles transforming the scenery. With no music or even birdsong, just the sound of your footsteps, the breeze in the trees and rushing water, the sense of immersion is undeniable. 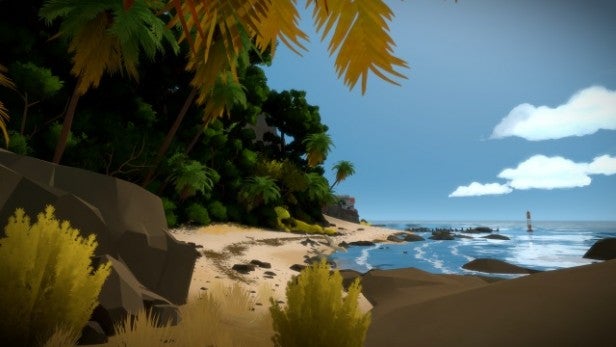 Yet there’s more to The Witness than just an atmospheric wrapper for a bunch of puzzles. Its real genius lies in the structure. The puzzles are artfully arranged in groups, with a number of these groups accessible right from the start. Generally speaking, the earliest puzzles in a group introduce some new twist, some new rule or new restriction, while subsequent puzzles explore these new variations in detail.

As you play the puzzles are developing in difficulty, but in a way the game is teaching you how to play as you play. It doesn’t do so by anything as dull or prosaic as a tutorial, but through a drip-feed of ideas and experience that – in a small way – is upgrading your mind. Quite early on you’ll encounter puzzles that your poor, lumpen grey matter just won’t be equipped to deal with. Yet you’ll return to them later and – quite suddenly – they’ll make perfect sense.

The puzzles and the exploration also seem inextricably linked. Solving puzzles can open up new areas, or new routes between seemingly distant regions of the island, adding to the sense of triumph when you complete a set. Exploring, meanwhile, gives you a breather from a sequence you may be stuck on, allowing you to go away, try a different sequence, then return later rearmed with new ideas and feeling refreshed. The non-linear nature of the game stops you feeling that you’re banging your head against a brick wall of challenge. It’s not that you won’t get stuck in The Witness – you will – but that being stuck is, somehow, part of the process of solving the game. 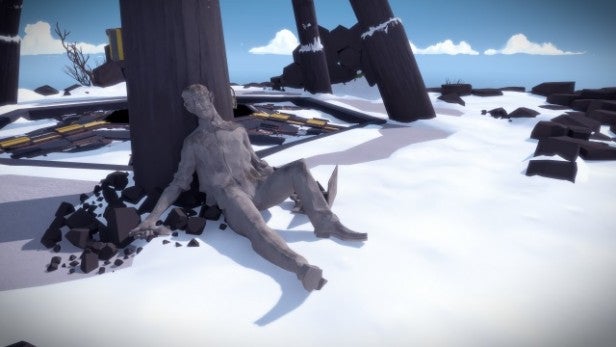 And above all the puzzles and all the exploration lies the biggest puzzle of all: what exactly is The Witness all about? There are no cinematics here and no easy journals or audio logs to spell out the background story. There are audio recordings scattered around the island, but these appear to be readings from other works, sometimes designed to help you understand a puzzle sequence, sometimes reflecting on some underlying theme.

Strange figures – maybe statues, maybe figures preserved in stone or lava – seem stuck in tableaux of creation, fear, power, love or violence, yet their tales are more hinted at than told. It’s the kind of stuff that fuels fevered discussion on Reddit forums, but you’re left in no doubt that The Witness wants you to explore more than just an island, and muse on something more than mazes.

In a way, I’d like to tell you more. I’d love to give you examples of the game’s brilliant use of scale and symmetry, or the way that sound factors in for certain puzzles. I’d like to cover how cleverly The Witness plays with its ruleset, making you think something’s a vital condition, then pulling the rug away to say, actually, it’s not and it never has been. Sure, there are times when all that restless variation leaves you stranded, unable to grasp what will later turn out to be the key. There are times when The Witness will leave you feeling like a dumb kid who’s accidentally sat in on an advanced calculus lesson. Yet it rarely feels sadistic, wilfully obtuse or unfair. Go off, it seems to say. Explore. Do something else and come back when you’re ready. 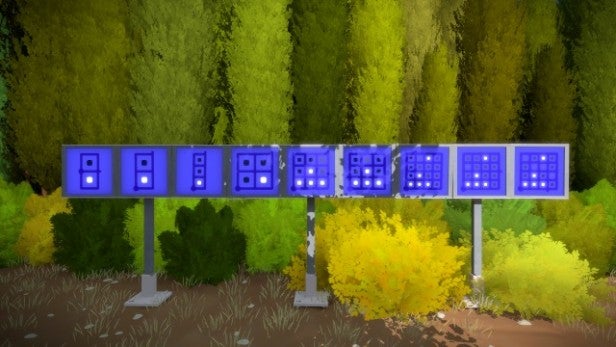 I’ll be honest. I didn’t expect to love The Witness. I’m not a massive fan of puzzle games and I found Braid mechanically engaging but weighed down by Blow’s writing style and sledgehammer subtle artistic pretensions. Early on, I was prepared to call The Witness out as iTunes store, free-to-play puzzle nonsense dressed up to look like art. Yet, minute by minute, hour by hour, I’ve been converted and utterly convinced. The Witness won’t be for everyone – it’s a rather abstract, cerebral experience, low on big emotional moments, thrills and suspense – but for those that get it, it’ll go down as a landmark game.

Verdict
Break it down and The Witness is nothing more than variations of the same simple maze puzzle, spread across a gorgeous island setting.

However, the visuals, the audio, the atmosphere and a brilliant structure – not to mention the relentlessly playful, imaginative puzzle design – transform it into something so much more. You’ll have your own opinion of whether The Witness is a masterpiece or not, but this artsy, cerebral puzzler is the kind of game obsessions are made of.