We thought we knew Finlux by now. We thought the once-Finnish brand (now owned by Turkish TV maker Vestel) was all about value; about serving up relatively lowly-featured sets designed to appeal to the many people out there who fancy a big new TV but don’t have the funds for something from one of the more established ‘household’ brands.

Then the Finlux 42S9100-T turned up. This hot-off-the-presses model is Finlux’s first serious stab at adding a ‘flagship’ TV to its range – even though while its £700 price is high by Finlux’s standards, it hardly looks expensive when compared with other 42-inch models. Especially as it ships with a free three year warranty. 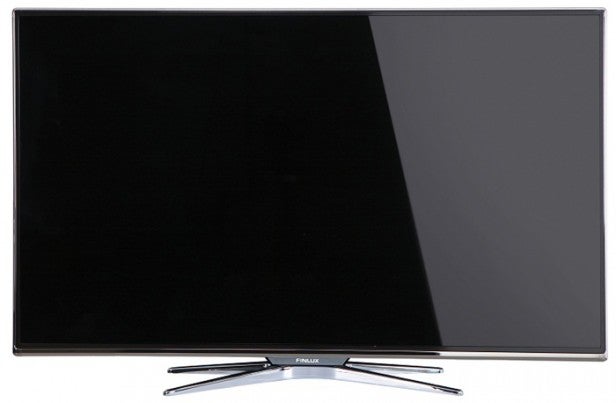 So what is it about the Finlux 42S9100-T that makes it Finlux’s most ambitious TV to date? Quite a lot actually. For starters it boasts built-in passive 3D playback, backed up by the inclusion of no less than eight pairs of glasses.

Also standing out on the feature list is a built-in Freeview HD tuner (not something you can take for granted across Finlux’s range), 100Hz processing, DLNA network support, Wi-Fi via a supplied USB dongle, and access to Finlux’s online services which, as we’ll see later, have at least a couple of useful tricks up their sleeve.

The set’s connections are suitably numerous, too. There are four v1.4 HDMIs, while as well as the aforementioned USB Wi-Fi option there’s a LAN for hardwiring the set to your network, and a second USB port for either playing music, video and photo files from USB sticks or recording from the built-in tuner. There’s even a subwoofer line-out for boosting the set’s low frequency audio performance by adding an optional external bass speaker.

All this and we haven’t yet mentioned the most immediate sign of the Finlux 42S9100-T’s surprisingly lofty ambitions: it’s distinctly swanky design. For starters its bezel is remarkably slender; only a little over 1cm wide. Second, the tasteful black finish of the main bezel is offset very cutely by a gleaming chrome-like outer trim encasing each of the TV’s sides.

The set’s rear is fashionably slim too, and the set’s build quality feels impressively robust. To top it all off, the whole screen attaches to one of the cutest metal cross desktop stands we’ve seen. Put some tape over the Finlux logo and casual observers could easily imagine that the Finlux 42S9100-T was actually a new LG or Samsung TV.

To support its DLNA capabilities, the Finlux  42S9100-T ships with Nero’s MediaHome 4 PC software, and Finlux has even gone so far as to try and simplify using this relatively complicated TV by providing a startlingly stripped back second remote alongside the bigger, more button-laden standard one. 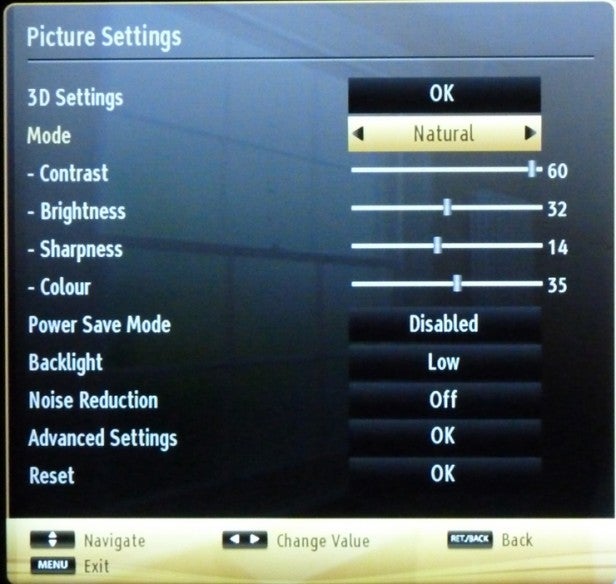 Firing up the Finlux 42S9100-T’s online features reveals a fairly basic-looking interface, comprising a single page of colourful but rather ‘standard def’ icons for accessing all the services currently on offer.

Obviously it’s a pity there aren’t more mainstream video platforms present, such as LoveFilm, Netflix and the ITV Player, especially given that the Finlux 42S9100-T’s flagship status. But we guess Finlux/Vestel simply doesn’t have the resources and industry punch to leverage as much content as the big-name TV brands. And even the content that is on offer still isn’t too shoddy given how much else the TV offers for its money.

Of course, having a swanky design and decent feature count is only part of a ‘flagship TV’ story. A top-end TV should also deliver the best picture quality a particular brand has to offer – which is quite an intriguing prospect given that Finlux regularly delivers picture performances that surpass the budget norm.

In 3D mode the Finlux 42S9100-T lives up to our hopes. The passive 3D strengths of practically zero crosstalk, no flicker, and impressive brightness and colour saturation levels are all strongly to the fore. There’s a really engaging, natural sense of depth to 3D images too, though the biggest surprise has to be how well the Finlux 42S9100-T handles motion in 3D mode. There’s practically no judder or loss of clarity over moving objects, be they shifting across or in and out of the 3D frame. 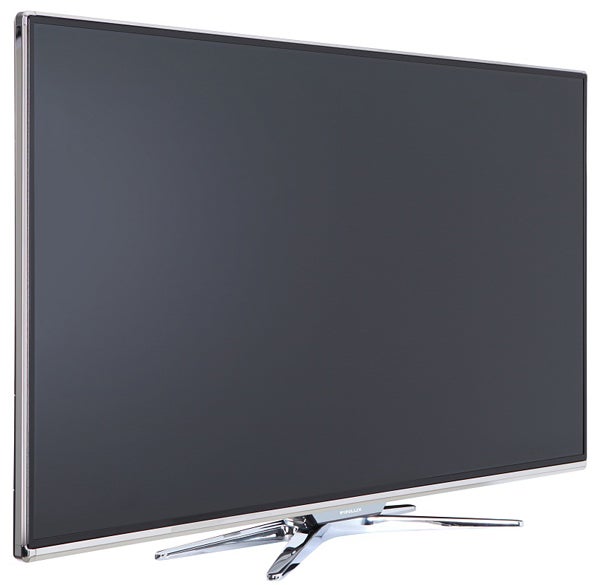 It’s also important to stress that while the Finlux 42S9100-T isn’t immune to the usual passive 3D flaws of visible horizontal picture artefacts, jagged edges and reduced resolution, they’re not a major problem – partly because of the relatively small size of the screen, and partly because the core image technology at the panel’s heart is pretty good.

Dark backgrounds lack a little depth thanks to a slight lack of contrast and shadow detail when the screen’s running in the relatively high-brightness mode best-suited to 3D playback. But overall 3D pictures are more than good enough to keep us smiling at the Finlux 42S9100-T’s price point.

The same is not true, sadly, of 2D pictures, for one key reason: Finlux’s shift to a very slim bezel design seems to have created some pretty obvious backlight flaws that become clear as soon as you take the 3D glasses off.

First, the deepest black levels we managed to get out of the Finlux 42S9100-T without removing uncomfortable amounts of brightness from pictures weren’t actually that deep. Very dark scenes exhibit a residual grey or sometimes slightly yellowish tone that stops them looking natural and immersive. The same issue also hides shadow detail in the darkest scenes, and can leave some dark colour tones looking a bit off-key.

Next, as we still often see from very thin edge LED TVs, dark scenes reveal that the backlighting isn’t very even. The edges of the picture look brighter than the rest, with a line of extra brightness visible around almost the entire border of the image. Plus there are a few places where the light intensity levels vary over a much bigger area. As ever, this sort of light inconsistency can prove seriously distracting during dark scenes (or when you’re watching a Cinemascope movie with black bars above and below), leaving you feeling like you’re trying to watch your film or TV show through an unwelcome filter.

Yet another layer of distraction comes into play if you attempt to use the Dynamic Backlight’s auto option in the TV’s bland but functional onscreen menus. This auto setting is too primitive with its workings, causing the picture’s brightness levels to jump around too often and too strongly. You can, at least, avoid this issue by leaving the Dynamic Backlight set to a static level. But doing this slightly reduces the image’s black level response.

The Finlux 42S9100-T’s various black level woes are made to look all the more unfortunate by the fact that when you’re not watching something dark, Finlux’s flagship TV actually performs rather well. For instance, HD images look extremely sharp and detailed, even when there’s a lot of motion to handle. This is certainly not something we would expect to see of any TV from a budget brand, even a flagship model.

In fact, if you’re watching a grainy source, such as the Harry Potter and The Deathly Hallows Part II Blu-ray, the sharpness is almost too strong using the factory picture presets, leaving images looking gritty. Don’t feel tempted to use the set’s noise reduction at these moments, though, or pictures will look softer and slightly laggy. Instead just nudge down the sharpness setting. 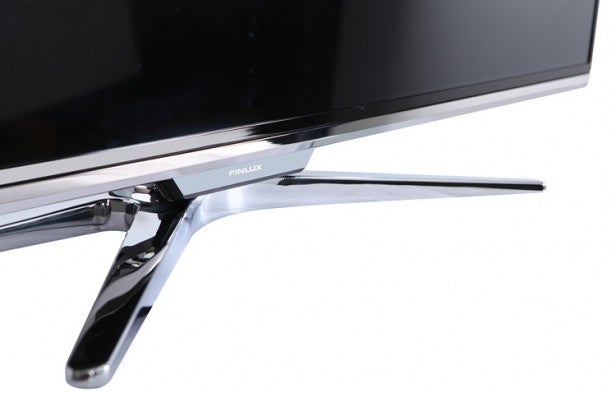 Colours are very respectable during bright scenes too, making full use of the screen’s high brightness levels to push forth a reasonably subtle and expansive palette. Even the set’s contrast looks more than proficient when you’re watching material with a mixture of light and dark.

Although the Finlux 42S9100-T’s issues with dark scenes prevent it from being a perfect gaming monitor, its sharpness, rich colours and brightness would have still made it a decent bet. Except for one thing. Our input lag tests measured a very high figure of around 100ms, which is enough to damage your performance with reaction-sensitive games. This reminds us that as with all passive 3D TVs, the Finlux 42S9100-T has an LG panel at its heart, as we’ve seen similar levels of delay from all of LG’s TVs this year too.

Sonically the Finlux 42S9100-T is par for the course where skinny TVs are concerned. There’s perhaps a bit more volume than might have expected from a budget slim set, and dialogue generally remains reasonably intelligible. But things definitely start to sound harsh if turn action scenes loud thanks to a lack of true bass and treble extension. 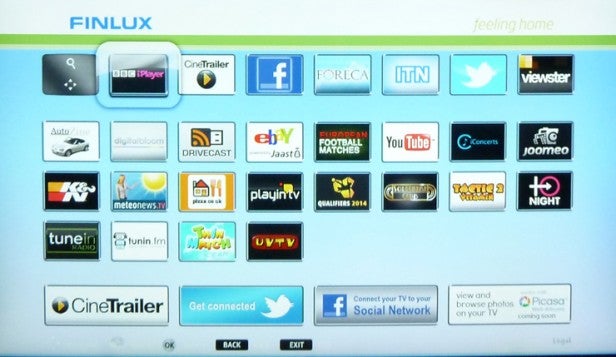 The Finlux 42S9100-T has a fair stab at taking Finlux up to ‘the next level’ of the TV market. It certainly looks like a premium set, its got the 3D, multimedia playback and Smart TV features we’d expect of a premium set (even if the Smart TV ones are pretty limited in scope), and there are likable things about its picture quality too.

However, by stepping up to the £700 mark, the Finlux 42S9100-T sees Finlux going up against some pretty stiff competition from the big brands, such as the brilliant Panasonic P42ST50 plasma TV, the good Samsung UE40ES6800, and the Sony 40HX753. And unfortunately, despite its very credible 3D efforts, it ultimately just isn’t good enough to rub shoulders with such esteemed company.