When we tested the Sony 32HX753 recently, it left us feeling rather deflated. It felt like a much bigger step down from Sony’s sublime new HX853 models than we’d hoped it would be. However, it did occur to us as we contemplated the various problems with the 32HX753 that some of the issues we had with it were related to its relatively small screen, and the likely usage scenarios such a small TV would likely find itself in. 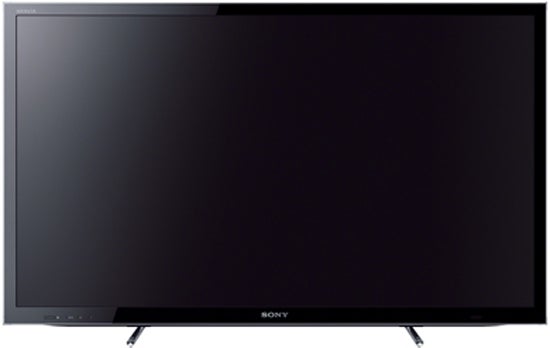 So it’s with a degree of optimism that we find ourselves faced today with the 32HX753’s much bigger (46in) brother, the Sony KDL-46HX753. Though this upbeat feeling takes an early hit as it transpires that the HX7 series design looks less satisfying on a 46in screen than it did on the 32HX753. It becomes clearer that the build quality of the set’s frame and rear isn’t a patch on that of Sony’s top-end model, and the set is also surprisingly chunky by today’s standards, in terms of both its rear depth and its bezel width.

Aesthetically off the pace
The combination of the black bezel with a silvery outer trim and the distinctive little legs of the desktop stand do add a touch of chic to proceedings, but overall the 46HX753 looks pretty uninspiring versus rival models from Panasonic, LG and Samsung this year.

Let’s not get too caught up on this, though. After all, Sony’s avoidance of ultra-slim designs is entirely deliberate, based on the brand’s belief that using ultra-thin bodywork can damage picture quality.

Priced for success
Also, Sony’s HX753 models are pretty aggressively priced for what they offer, undercutting the already surprisingly affordable HX8 series by £300-£400 on average and also showing a clean pair of pricing heels to similar-level models from the likes of LG, Panasonic and Samsung. So if the KDL-46HX753 can perform well enough, we’ll be more than happy to forgive its slightly old-fashioned looks.

Connections on the Sony KDL-46HX753 more than pass muster. Four v1.4 HDMIs provide portals for digital HD and active 3D images, plus there are two USBs for playing back a solid selection of video, music and photo file formats, as well as both LAN and integrated Wi-Fi options for streaming from networked computers (Macs and PCs if you download Sony’s Homestream software) or accessing Sony’s latest SEN online system. 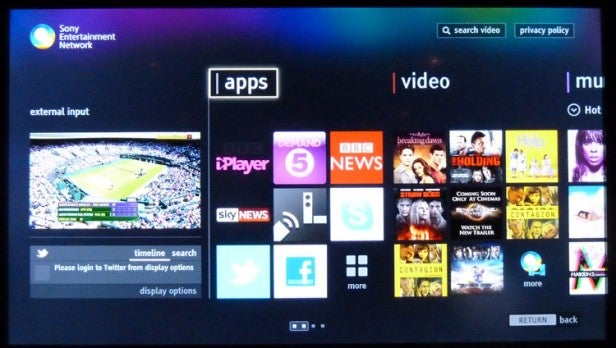 The SEN system is easily Sony’s best online TV effort yet. The main reason for this is the introduction of a much-improved graphical interface that makes it far easier to find specific online content. But Sony has also improved the actual content – especially by adding Netflix. It also benefits from the much-improved versions of Sony’s Music and Video Unlimited services.

Self promotion
Some might take issue with the way Sony promotes its own film and music subscription services on the SEN interface. But if you’d rather go the LoveFilm or Netflix routes for your movie and music needs, finding those services is hardly a chore. Especially as you can move them up into a ‘Favourites’ menu section to make them even easier to get to.

Overall, while SEN might currently lack the huge numbers of smaller apps that populate Samsung and LG’s online systems, it’s still arguably the best online service around, simply because it focuses so single-mindedly on providing as much video content as possible. And video content remains what we, at least, most want to watch on our TVs.

Sony is still going its own way where picture adjustments are concerned, and as such still hasn’t bothered seeking the endorsement of the Imaging Science Foundation (ISF) for the KDL-46HX753.

Once you learn your way round Sony’s system, though, there really is a plentiful supply of adjustments at your disposal. For instance, you can adjust the picture’s gamma level, as well as the bias and gain of the red, green and blue colour elements. There’s a backlight adjustment as well as the usual contrast and brightness tweaks too, and you can muck about with almost every aspect of Sony’s latest video processing system.

Flexible friend?
To be honest, some if not many of Sony’s processing elements are best set to off; certainly we would treat the detail and edge enhancers in particular with great suspicion. But it’s good to see Sony putting so much control in the users’ hands. 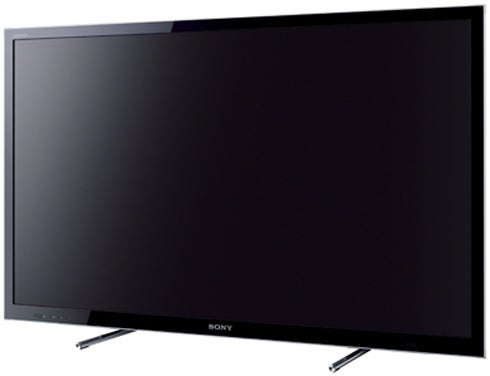 Given that the biggest problems we had with Sony’s 32HX753 materialised while watching dark content, we kicked off our tests of the 46HX753 by feeding it a selection of the darkest film scenes we could think of. And we were mightily relieved to find it handling them very well indeed.

Good black levels
For starters, the Sony KDL-46HX753 seems to be able to produce a much more consistently deep black colour than its smaller sibling. In fact, it produces one of the deepest black levels we’ve yet seen from an edge LED TV, helping dark scenes instantly look very credible. Not having a wash of nasty grey lying over dark scenes means that dark colours have a more natural tone, too.

It was also a relief to find that the 46HX753 can look excellent with dark scenes without you having to work so hard to find a settings ‘sweet spot’ as you have to with the 32HX753. Certainly you can still mess things up if you leave the backlight and brightness settings too high (the backlight, in particular, should ideally be set no higher than ‘6’ unless you’re watching in an extremely bright room). But the 32HX753’s problems with greyness and backlight clouding are much less easy to replicate on the 46HX753.

Strong shadow detailing
The 46HX753 also outguns its smaller sibling by managing to combine its deep blacks with a pretty strong shadow detail performance. In the shot early on in the final Harry Potter film where Snape is shown from behind framed against an arch with darkness to either side of him, you can see far more detail in the dark edges than you can during the same shot on the 32HX753.

The Sony KDL-46HX753’s performance during dark scenes isn’t perfect, mind you. For while backlight inconsistencies are rare, they’re not altogether invisible during extremely dark shots, with small jets of light sneaking in from the corners. Follow our earlier advice concerning the backlight settings, though, and you really shouldn’t be disturbed by these inconsistencies with any regularity. 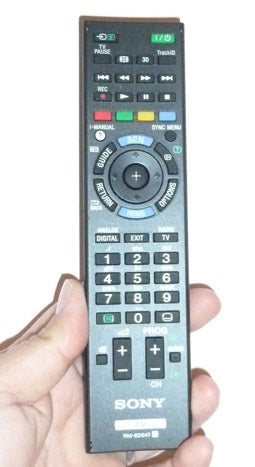 Black levels also drop off quite severely if you watch the screen from much of an angle down the sides, and finally, like the 32HX753, when calibrated to produce their best black levels the 46HX753’s pictures aren’t as bright as those of some rivals (including Sony’s own brilliant HX853 models).

Bigger is better
For us, though, this brightness situation is much less of a problem than it was with the relatively small 32in 32HX753, since a) the bigger screen means there’s still more total brightness on show and b) it’s much more likely that the bigger 46in TV will be used as a serious movie machine in a properly darkened environment, where brightness issues are less important than achieving a convincing black colour.

It’s also important to stress that the 46HX753 is capable of looking much punchier than the 32HX753 if you go for one of its dynamic picture settings. In other words, this TV can cater for a much wider variety of environments and usage types, making it far more likely to satisfy a wider audience.

Turning to other areas of the Sony KDL-46HX753’s performance, its HD pictures are sharp and detailed without looking forced or noisy (provided you deactivate the aforementioned edge and detail enhancer options). Contributing to this sense of sharpness is some decent motion handling, with images suffering only minor amounts of judder and only small traces of resolution loss over moving objects.

Motion advice
The 46HX753’s motion performance isn’t as perfect as that of the HX853 models, it must be said. Also, many of the provided motion processing options can do more harm than good overall, with the only two really worth experimenting with being the Clear mode (which creates the fewest artefacts but leaves the picture looking a touch dim) and the Standard mode (which can cause the occasional unwanted side effect but doesn’t dim the image). 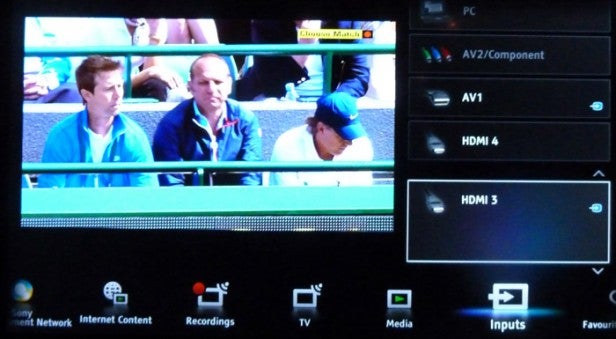 Last but not least in the Sony KDL-46HX753’s arsenal is a really handy 3D performance. Regular readers may remember that last year’s EX7 series from Sony were pretty disastrous in 3D terms, but Sony has really up its game here.

Crosstalk reduction
The excessive crosstalk double ghosting noise witnessed on the EX7s has been greatly reduced, leaving edges usually looking sharp and clean, and the image’s sense of depth much more impressive.

These glasses – none of which, irritatingly, are included – still knock a bit more brightness out of 3D images than we’d ideally like them to. But overall the 3D detail and clarity carry the day, making 3D viewing entertaining and involving – especially if you dim the lights in your room to accommodate the reduction in image brightness.

Gamer glory
Provided you hunt out the Sony KDL-46HX753’s Game preset (tucked away inside the Scene Select submenu of the Options menu) and turn off the set’s edge and detail enhancers, meanwhile, the TV works nicely as a gaming monitor. Especially as we measured its input lag at just 39ms, which is low enough not to significantly upset your gaming performance.

Sonically the 46HX753 is average to good. It’s nice to find Sony providing two different audio reproduction options according to whether you’re mounting the TV on a wall or its desktop stand. The set’s reproduction of the mid range of audio tones is wider and more accommodating than most too, meaning that action scenes can sound more well-rounded and less distorted than they usually do on today’s flat TVs.

More treble and especially bass extension is needed to make the 46HX753 an actual audio hero, but all in all it provides a thoroughly acceptable audio accompaniment to its strong pictures.

Verdict
The Sony KDL-46HX753 doesn’t by any means hit the same dizzy picture heights as its illustrious HX853 flagship sibling. But it’s still a very strong performer for its price, and makes the numerous issues we had with the 32in HX753 look like the exception rather than the rule where Sony’s 2012 TV range is concerned. Something to think about for those websites which claim that you only need to test  one screen from any given TV range…