Available for PS4, Xbox One and PC (version tested)

After years of skirting around compromises between immersion and development cycles, Codemasters has finally jumped head first into the most in-depth Formula One game in years. It’s not perfect, but the small tweaks the team has made have worked wonders for a series that was beginning to look like it had reached its limits.

To structure this review, I’m going to take you on a journey through a typical race weekend of the game’s 10-season Career mode.

Formula One is known for its ridiculous city-cum-circus on wheels that goes trundling around the world, taking over 19 cities over the course of the nine-month season. It’s quite the spectacle. In F1 2016, Codemasters has attempted to capture the feeling by plonking you, the driver, down at a desk with a laptop and phone to manage your life, with both your lead engineer and agent walking up to you, talking at you for 30 seconds before wandering off.

You get all that, and Sky Sports F1’s Anthony Davidson hanging out in your eyeline, occasionally peering over and awkwardly looking away. I don’t know why he doesn’t just come over and say hello. 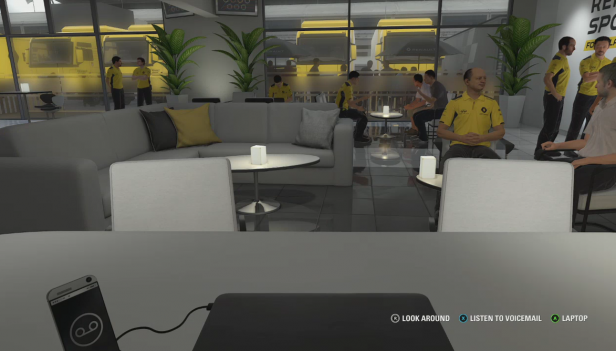 Unusually, Anthony Davidson isn’t present in the above screenshot

While some might see it as a step up from previous games where you just had an inbox to deal with, I spent a huge amount of time just waiting for my helpers to shut the hell up and let me carry on with my weekend. Nothing these guys say can’t be said by a handy on-screen graphic. 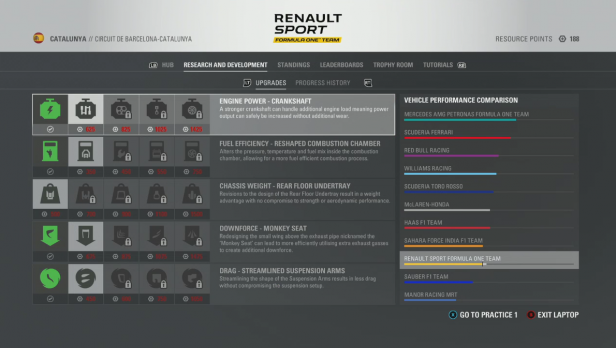 Thing is, the basics of the career mode are excellent. You vie for No.1 status with your teammate by beating them in qualifying and the race, and you’re given a ‘Rival’, another driver who you’ll have a good chance of beating as the season progresses.

There are upgrade points to unlock, which you get by completing various challenges in practice sessions and doing well in the race. You can use these to direct attention to the bits of the car you think need improving. For example, if you’re driving for McLaren, you’ll use all the points you can kick to Honda in the behind. If you’re driving for Haas, you might spend more on reducing weight or working on aero. It’s simple stuff, but provides plenty of motivation to do well all the same. 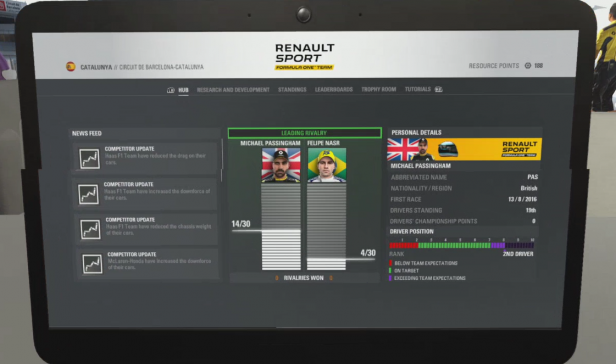 Aside from the race itself, it’s the Free Practice sessions that have received the biggest overhaul.

There’s now proper motivation for you to drive as many laps as possible, with three separate challenges encouraging you to learn your car, the track and your own limitations.

Track Acclimatisation has you driving through virtual gates placed on the racing line. Drive through them quickly and accurately and you get points; string enough together and you’ll get a consistency bonus. To pass and earn points towards car upgrades, you have to beat the target score. It’s fun, not overly challenging and a good way to earn some handy points while learning the track. 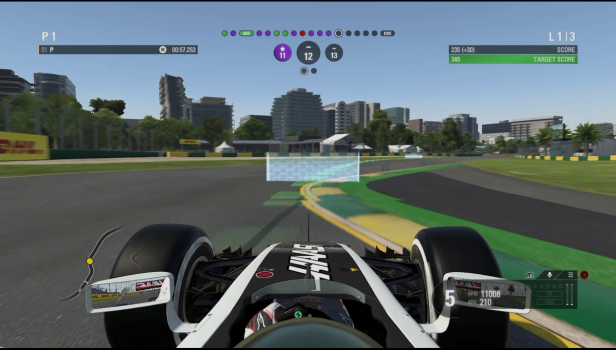 The tyre-wear test is much, much harder, especially on the higher difficulty settings. You have to put in three or four laps that are not only consistent and fast but also easy on your wheels. With a controller and no traction control, this is really, really tough and took me a long time to master for every track.

The final test, which is for qualifying pace, is a simple ‘beat the laptime’ jobby and puts into practice everything you’ve learned so far.

These additions to practice make the career mode quite a lot longer, because you’ll feel compelled to complete them even if you reckon you’re a master of each track.

It’s in qualifying that the game’s updated handling model comes to the fore.

Mostly unchanged from last year’s game it may be, but it’s a lot more challenging. There are a couple of reasons for this: poorer-performing cars have very little grip and there are no driving aids, so it’s an absolute nightmare to drive out of medium and low-speed corners. Combine that with lumpier kerbs, more slippery off-track asphalt and merciless gravel and you have a recipe for a bit of a challenge.

The way the cars handle in a slide has changed slightly, too. The majority of my play time was with an Xbox 360 controller without traction control switched on. In my initial hands-on with the game I stated it was ‘undriveable’ compared to F1 2015, but having had more practice I now feel fairly comfortable saying it’s probably the most fun way to play, especially if you like using Codemasters’ wonderful Flashback system to correct major mistakes. 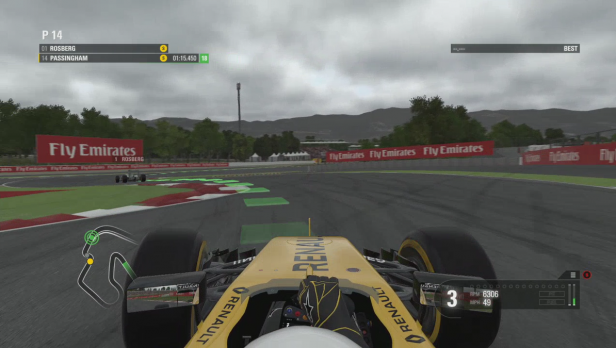 Wet weather makes everything more exciting, and precipitation really brings to the fore how great the game looks. It’s not a great deal prettier than last year’s title, however; there’s not been much progress on that front. One omission I can’t get my head around is proper tyre smoke and spray. Both are present, but they’re not significant enough to obscure your vision even when they really should. I suspect it’s a performance issue, but I really would’ve liked to have seen increased smoke options in F1 2016.

As ever there are loads of setup tweaks to be made, as well as five presets for each track if you don’t want to mess around with your settings too much.

I made fun of the addition of the warm-up lap during my first-impressions video of F1 2016, but I’m now starting to get why it’s there. When you’re fully immersed in a season of F1, there’s a building tension as you drive your car to the grid, weaving to warm the tyres, braking to keep the discs hot and checking out any changes to the weather since you last drove on the track. 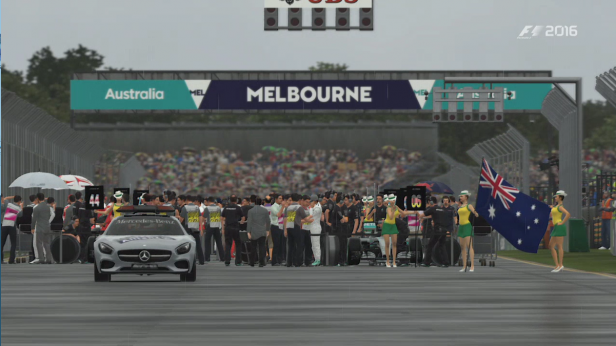 As you pull up to the line and wait for the rest of the grid to form behind you, your heart rate rises. For a moment, you feel like this is your one shot at success. No rewinds, no second chances. It’s absolutely brilliant. It’s a bit of a shame there’s a fade-to-black between the end of the warm-up lap and the start of the race, but it doesn’t reduce the enjoyment by much.

The start sequence has changed, too. You now have manual control over your clutch, so it’s easy to get a jump start or get bogged down off the line. It makes things a lot more unpredictable, especially when the AI in F1 2016 is incredibly unforgiving. 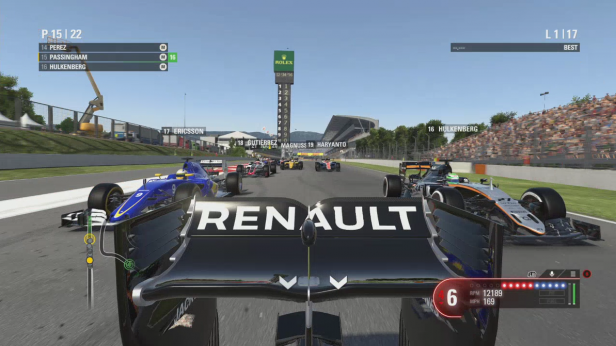 The AI is the best in the series so far. The drivers can be incredibly clever and I had plenty of multi-corner side-by-side action in my dozen hours of play time. They can also be quite dim. On some tracks and weather conditions, such as Melbourne in the wet, they’re downright boring to drive against, slowing down to a crawl if they find themselves half an inch off their pre-programmed racing line. Elsewhere, they’re brilliant. Barcelona is a particular highlight, but I also had loads of fun at Hungary and Russia.

They’re not overly aggressive, but will happily turn your car into a mass of carbon fibre at the drop of a hat if you do something unreasonable, such as jinking left and right on a straight.

They still don’t handle stationary or slow cars very well, which is very frustrating considering this was a problem in the very first Codemasters F1 game. It means that if an AI car breaks down on the track, it’s entirely possible that the entire field will stop and wait for it. They’ll eventually resolve it by themselves, but it’s still disappointing for this behaviour to be present. 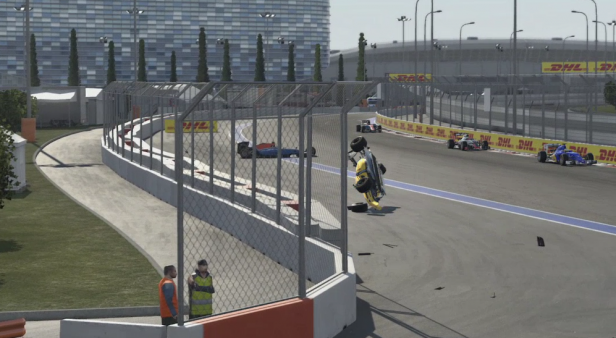 If a car does break down, you might get a safety-car intervention. These go as you expect, and while they certainly mix up your strategy, they’re a faff in any race distance shorter than 50% because they can last up to four laps, which is a big chunk of time if you only have an hour or two to get as much play time in as possible. They can be turned off, but I would’ve really liked to have seen the option to skip a safety car so you could get the benefits of the mixed-up strategy without the boredom of driving slowly around the track for 10 minutes.

Codies has also made some changes to the damage model. There are now wheel tethers, which keep errant wheels from coming detached from your car during a big crash. It’s a tiny change in the general scheme of things, but it makes crashes feel much more realistic. So too do the slightly tweaked physics of some tyre barriers, which have the right amount of give in a high-speed crash. 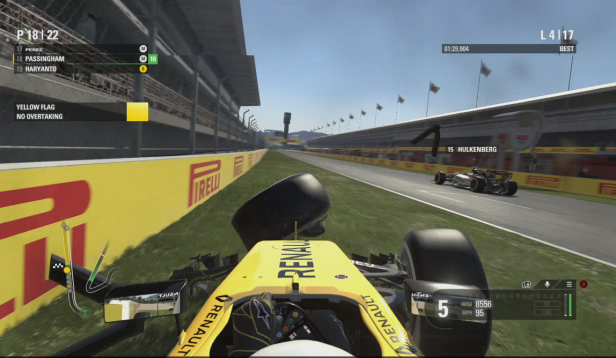 The pre- and post-race cinematic TV segments aren’t brilliant, though. As much as I like the contributions of Sky’s David Croft and my No.1 fan Anthony Davidson, they don’t have much to say that’s not generic and slightly stilted. The pre-race visuals don’t show much variety – every time you race you’ll see a random driver laughing in the garage, another driver chatting with his engineer and then your chosen pilot having a quick play on his iPad before the race.

It wouldn’t be an F1 game without a few bugs. Nothing too serious, but there are problems with the engineer’s radio messages that sometimes come out with incorrect pieces of information in the wrong order. There are also occasions where text stays on screen when it should’ve been dismissed, and if you have a crash and then Flashback, the yellow flags for your crash will stay out temporarily, even though, by the game’s logic, the crash never actually happened.

Related: What’s the best F1 game of all time?

Anyone who hasn’t bought an F1 game in a few years should absolutely pick up F1 2016, as should long-time fans of the series. It’s the best Codemasters F1 game yet and, despite a few rough edges, it’s fantastic fun.