The EH-TW5300 is an LCD projector designed with home-entertainment in mind. Despite costing only £580, key features include a high 2,200 lumens of claimed brightness, a Full HD resolution, a dynamic contrast ratio claimed to be 35,000:1, MHL mobile phone connectivity and 3D playback.

Aesthetically, the EH-TW5300 will be perfectly at home on a coffee table. It leaves a relatively small footprint by projector standards, and what there is of its chassis is easy on the eye thanks to its curvy frame, rounded edges and a high-gloss white finish. 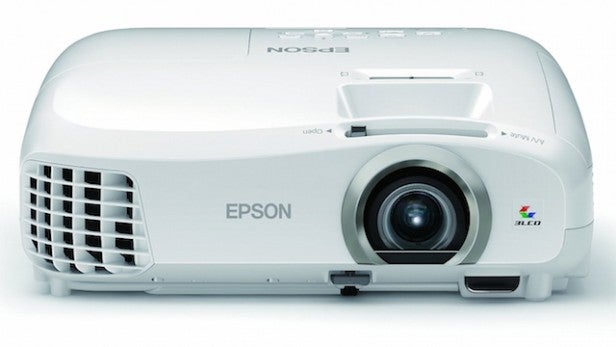 What sits slightly uncomfortably is how the silver-metal trim surrounding the lens is straightened off by the unit’s edging, but you’re sort of distracted from it by the tasteful detailing of the lens mount.

A large vent sits on the left side of the fascia, which raises initial concerns about potential light spillage. Happily, it turns out that the only thing escaping through this will be heat.

The lens itself looks promisingly large for such an affordable projector, while a large hole cut in the top panel provides access to simple and reasonably responsive zoom and focus rings.

Turning to the EH-TW5300’s rear, you’ll find a good set of connections. Highlights include two HDMIs (one with MHL support), a VGA input, a USB 2.0 port, and a composite video input (although I’d recommend you avoid using this if at all possible).

The USB port can be used for connecting USB storage devices or compatible digital cameras for playing slideshows directly through the projector.

You might be interested to know that there’s a £599 variant on the EH-TW5300, the EH-TW5350, which adds Wi-Fi Direct and Miracast to the connectivity options, as well as the ability to control the projector via the Epson iProjector iOS/Android app.

The EH-TW5300 is well specified for its money. As we pointed out at the start of the review, it claims to be capable of shunting out an impressive 2,200 lumens of brightness – although this drops to 1,500 lumens under the Eco lamp output setting. Plus, Epson is keen to stress that this brightness applies equally to colour and white light; there’s no compromise here as you get with
rival, single-chip DLP technology as a result of its colour-wheel system.

While we’re on the subject of LCD versus DLP projectors, the EH-TW5300 will be immune to the latter’s rainbow effect issues too – although the EH-TW5300’s image can be expected to degrade more over its lifetime than tends to be the case with DLP projectors.

The EH-TW5300’s claimed contrast figure of 35,000:1 is eye-catchingly high for a sub-£600 projector, even if it’s only achieved via a dynamic iris system that adjusts the light output in response to the image content.

I was also struck by the projector’s claimed lamp life of 7,500 hours (in Economy mode), which is almost twice as high as the lamp lives quoted by many rivals.

The EH-TW5300 supports 3D playback if you add a pair of optional active shutter 3D glasses, and the 3D playback is supported by a 480Hz driving system to reduce crosstalk ghosting noise.

Perhaps the most surprising discovery on the EH-TW5300 given its price is a frame interpolation processor, designed to calculate extra frames of video to remove judder. Whether this processing system turns out to be a help or a hindrance remains to be seen.

One last feature to mention here is the inclusion of a built-in speaker. However, its mono 5W output means it’s unlikely to be able to compete with the surprisingly decent sound emitted from some of BenQ and Optoma’s latest projectors.

When it comes to physical setup aids, the EH-TW5300 is hit and miss. There’s a decent 1.2X optical zoom for this level of the market, and a physical slider for adjusting keystone to get the sides of your image straight. There are also screw-down feet at each rear corner and a drop-down leg under the centre of the front edge. 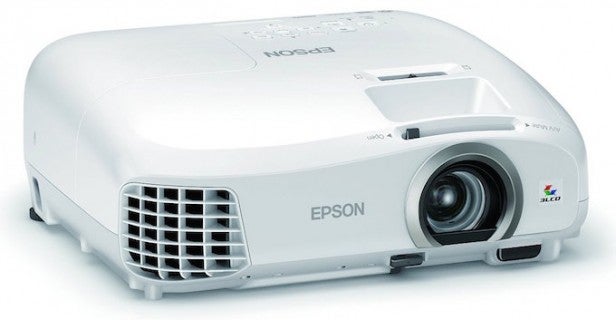 The zoom and focus rings are accessed through an opening in the top panel, and respond reasonably accurately to small movements.

However, there’s no optical vertical image shift to help you lift or lower the image into the right place on your wall or screen. To be fair, this isn’t a feature you’d normally find on more affordable projectors – although the £659 BenQ W1110 I recently tested did come with a vertical shift.

Most of your calibration tricks will, for reasons discussed in the picture quality section, focus on trying to get more black level out of the projector. But really the only useful options are to set the lamp to Eco for anything approaching dark-room conditions, and leave the Auto Iris set to its Normal mode (the Fast mode tends to be too frenetic and causes a lot of noise from the projector’s dynamic iris).

You can try nudging down the brightness to a level around the early 40s, although this tends to affect the colour balance and shadow detail a bit too heavily. The 46 level used by the Cinema mode is probably as low as most people will want to take the brightness.

Other tips would be to turn of all noise-reduction processing, at least when watching HD, and to use the Frame Interpolation system for sport – and even then, only on its Low setting.