The EH-TW5300 is actually at its best in 3D mode. The dimming effect of Epson’s rechargeable 3D glasses – should you buy them – subdues the projector’s black-level shortcomings quite effectively, leaving you free to enjoy the surprisingly detailed and sharp quality of the 3D pictures on display.

This sharpness is only very rarely besmirched by any crosstalk ghosting noise, while – using the default settings – the projector’s brightness stops it from looking dull and devoid of shadow detail. 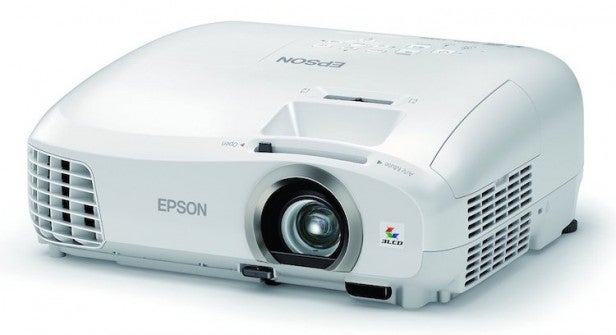 The only issue here is that the default setting sets the lamp to its Normal level. This results in a huge surge in noise from the onboard cooling fans – so much so that you may well prefer to turn down the lamp to Eco for 3D, even though this inevitably results in a dimmer image and some slightly hollow dark areas.

On the upside, the EH-TW5300’s audio sounds more powerful than you might expect from a mono 5W speaker. Voices sound reasonably clear, even during action scenes, and there’s a surprising amount of audio detail too.

Bass is at a premium, however, and the speaker can distort at high volumes. Worse, unlike some of the other projectors we’ve tested recently, the EH-TW5300’s sound doesn’t project far beyond the physical confines of the projector. This means it invariably sounds hugely dislocated from the pictures it’s supposed to be accompanying.

Considering projectors are by their nature best used in a dark room, it’s a pity that the remote control Epson provides with the EH-TW5300 doesn’t carry any button backlighting. Such a shortcoming is exacerbated by its rather crowded layout, which makes it all too easy to press the wrong button by mistake when you can’t fully see what you’re doing.

In terms of running noise, the EH-TW5300’s abilities depend greatly on the lamp mode you’re using. In Normal mode – as noted in the 3D section of the review – the cooling fans make quite a distracting racket rated at around 37dB. In Eco mode, however, the noise drops to just 27dB (on a par with the recently tested BenQ W1110 and W2000) and is hardly ever a distraction.

There is an issue with noise elsewhere, however. For with the Auto Iris active – which is necessary to try to counter the worst of the EH-TW5300’s black-level shortcomings – you can clearly hear some distracting clicking and squeaking noises as the iris goes about its light-adjusting business.

Finally, if you’re of the opinion – not unreasonably – that the EH-TW5300 might make for a highly affordable big-screen video gaming display, you’ll be pleased to hear that input lag is in the region of 30ms. This is provided you turn off all the image processing apart from the auto iris. This is a pretty tidy result for an LCD projector, and one that shouldn’t leave you too exposed when going toe to toe in Call Of Duty with people using dedicated gaming monitors.

The EH-TW5300 could find a market with people looking for a cheap projector to go into a room that can’t be completely blacked-out. Its lack of black-level depth is really its only serious image problem, so if you’re unlikely to be using it such circumstances it’s going to be particularly noticeable, then the TW5300 is worth considering.

However, if you’re looking for a serious gaming or movie-viewing machine, you’d be better served by the Optoma HD28DSE and BenQ W1110 for example, which adapt better to dark-room environments and don’t generate anything like as much dynamic iris noise.

The EH-TW5300 certainly looks the part, and initially it performs well too. However, a grating lack of black-level response accompanied by a distractingly noisy dynamic iris means that true movie fans would be better looking elsewhere.