The £659 W1110 is BenQ’s latest, affordable home-entertainment projector. As usual with BenQ, it uses a single-chip DLP projection engine, which in this case is aided and abetted by a six-speed, six-segment colour wheel and a Full HD pixel count. Also present is BenQ’s Smart Eco automatic image optimisation system, which adjusts the projector’s light output to enhance contrast as well as, apparently, reducing the projector’s running noise.

As with most BenQ projectors, the W1110 is quite a cute-looking unit. As with the recently tested BenQ W2000, it features a larger chassis than last year’s BenQ models to accommodate a better speaker system and, more importantly, better heat venting. It still looks good on a coffee table, though, with its glossy white finish, silver front plate and pleasantly rounded edges. 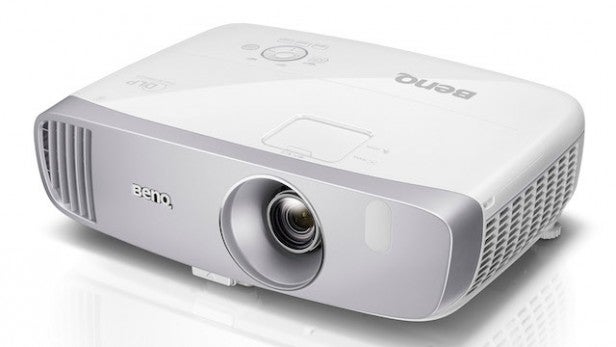 While the W1110 doesn’t boast the Cinematic Color feature that proved so effective in the W2000, it’s still a very well-specified projector for its money.

Its Full HD resolution can’t be taken for granted at the sub £700 price point, while its use of a six-segment (RGBRGB), six-speed colour wheel shows serious dedication to the home-entertainment/video cause. Certainly we’d expect a colour wheel such as this to deliver more natural, cinematic colours and less of DLP’s so-called rainbow effect problem. This is where stripes of pure red, green and blue can be seen in your peripheral vision, or can flash up momentarily over very bright objects.

Also included is Texas Instruments’ BrilliantColour technology for boosting colour saturations, while the lamp output is rated at a maximum of 2,200 lumens. When using the Smart Eco mode, contrast is stated as being a respectable 15,000:1.

The Smart Eco mode is itself a pretty big deal for this level of the market, where effective dynamic contrast systems tend to be at a premium.

Other likable numbers are the projector’s claimed 6,000 hours of lamp life – if you stick with the Smart Eco lamp setting – and its claimed ability to run with just 27dB of noise.

Connections cover all the essentials. Two HDMIs will provide most users with ample video connections, but there’s also a powered USB port where you could add a streaming dongle such as Google’s Chromecast or Amazon Fire. There’s also composite, component and D-SUB PC inputs and a 12V trigger port for, say, firing up a motorised screen.

You can also add an optional wireless video system that lets you beam Full HD video and audio from your source to the projector, without the need for any cables. This is always a handy feature given the difficulties of connecting a source to a projector that’s some distance away.

There are also a few audio-related jacks, reflecting the fact that the W1110 – like most home-entertainment projectors these days – features a built-in audio system to save you having to always find an external system to which you can connect your video sources.

The sound system uses the same Cinema Master Audio+ audio-enhancement processing that delivered such surprisingly good results in the W2000. However, it carries only a single 10W speaker rather than the stereo configuration in the W2000.

The last feature of the W1110 you may be interested in – aside from the more impressive specs we’re about to cover in the Setup section – is its ability to play 3D. Note, though, that you don’t get any 3D glasses for free with the projector, and I wasn’t supplied with any for this test.

The W1110 is seriously well stocked with both physical and software setup aids. Particularly impressive on the physical side is the presence of a vertical image-shift wheel, with which you can move the image up or down optically to help you get it in the right place on your screen. The extent of the shifting isn’t great, but finding any optical vertical image shift at all is practically unheard at this price. 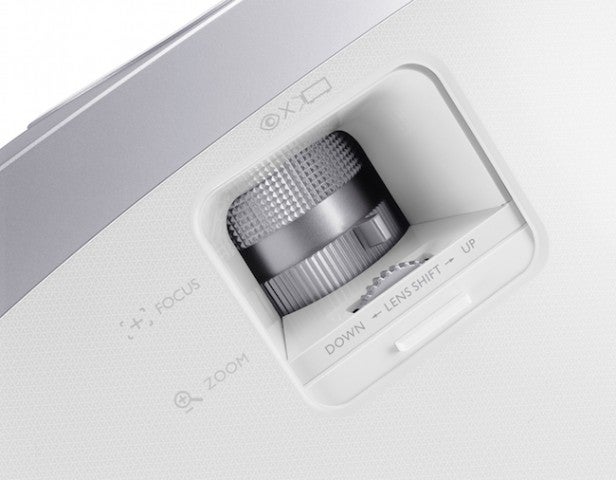 As well as being helpful in its own right, the vertical image shifting limits the potential for having to use digital keystone correction – which essentially distorts the 1:1 pixel reproduction you ideally want from a Full HD projector – to get the image’s edges perpendicular.

There’s also a simple dropdown leg under the centre of the front edge and a small amount (1.3x) of zoom at your disposal from the short-throw lens – a lens, by the way, that’s capable of delivering a 100-inch image from a throw distance of just 2.5m.

Despite its sub-£700 price, the W1110 is packed with calibration tools. Colour management for the three primary and secondary colours, gamma controls, white balance calibration and noise reduction.

So extensive are the set up options available, in fact, that the projector is endorsed by the independent Imaging Science Foundation (ISF) as a projector that could be professionally calibrated by one of its trained representatives. So long as you pay it for the privilege, obviously.

Presumably because of its lack of in-factory calibration, or specialised Rec 709 colour wheel design, we found the W1110 trickier to set up than the W2000.

The main problem is trying to get the right balance between black-level response, shadow detail and video noise, for reasons I’ll get into in the picture quality section.

In the end, I settled on a modified version of the Cinema preset, with brightness nudged up to 51, contrast nudged down to 49, the gamma set to 2.1 rather than the default (and usually preferable) 2.2, and the lamp set to Smart Eco.

I’d also recommend that you turn off noise reduction, since the W1110 doesn’t require assistance to handle film grain. Especially when that “help” actually tends to soften the image.