While there’s plenty to like about the EH-TW5300’s pictures, ultimately, they’re undermined by a single but crucial flaw: poor black-level response.

With its high claimed contrast ratio, I’d hoped that the EH-TW5300 might overcome the usual black-level issues that affect affordable LCD projectors. But this wasn’t to be.

Dark scenes and dark areas of otherwise bright scenes both looked significantly washed out and grey. Immediately this made them look unrealistic and, as a result, hard to engage with.

So severe is the lack of black level that it inevitably impacts the projector’s colour performance. In dark scenes, the constant infusion of greyness leaves dark colours and skin tones looking muted and “off-key”.

This isn’t such an issue if you’re using the projector in a fairly bright room. However, it’s still there – especially since it has such a “cooling” effect on dark scene colour temperature. Also, there’s no getting round the fact that we’ve seen other similarly priced projectors – including the recently tested BenQ W1110 – perform much better in dark rooms while still being very watchable in ambient light.

One other, lesser issue with the EH-TW5300’s LCD pictures when compared with those produced by DLP projectors we’ve seen recently is that they leave you feeling a little more aware of the image’s pixel structure. This is particularly an issue over diagonal and curved lines, where you can see greater jaggedness in the EH-TW5300’s images.

The TW5300’s black-level issues are made all the more maddening by the fact that, in many other ways, its pictures are pretty decent.

Bright scenes, for instance, look impressively dynamic and rich, with
some striking colour and peak white brightness. Although colours
look a little off-key in dark scenes, they look credible as well as
punchy in bright scenes. 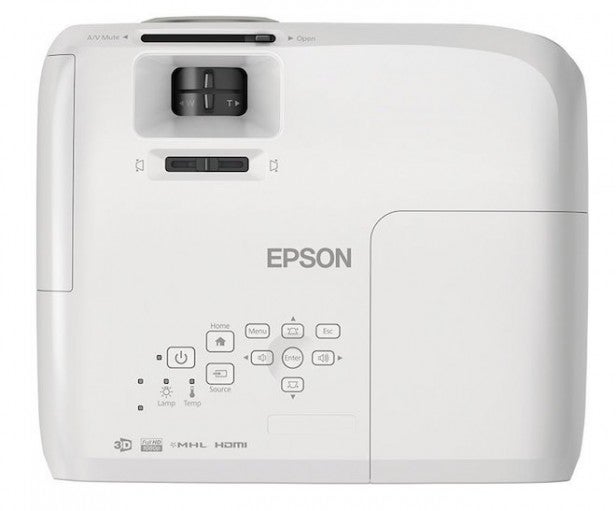 HD
sources look phenomenally crisp too, as well as jam-packed with detail.
What’s more, much of this detailing remains visible during dark scenes,
despite the impact of the grey clouding. This ensures that dark scenes
at least enjoy similar sense of depth as bright scenes,
even if they still look unnatural for other reasons.

This clarity
extends to the projector’s motion reproduction, which looks
clean – it’s only troubled by quite natural amounts of judder. If you wish, you can remove judder almost completely by using the Frame
Interpolation system on its mid or high setting. However, the result will be some unwanted processing side effects such as haloing
around moving objects or shimmering over moving backgrounds.

The
unwanted side effects reduce using the Low frame interpolation setting,
but the picture seems to stutter every few frames in a way that’s more
distracting than the slight judder the feature is meant to counteract.

It’s
worth reminding you, too, that the LCD technology at the EH-TW5300’s heart
is immune to both the rainbow effect striping and the low-level green
speckling noise that can affect some cheap DLP projectors.

It
is, overall, easy to see from the EH-TW5300 that Epson knows its way around
a projected video image. However, it’s also apparent that in order to get to this level of Epson projector
technology, where its colour, sharpness and detail strengths are joined
by a satisfying contrast performance, you’ll need to spend more than the asking price of the EH-TW5300.