The P9000 is the latest Android-based smartphone from Chinese manufacturer Elephone, which is gaining a solid reputation for its cheap yet cheerful mobile tech.

The Elephone also runs Android 6.0, the latest version of Google’s operating system. Despite these incredible specs, it costs less than £200.

Elephone’s previous efforts have been a little inconsistent when it comes to general build and design.

The Elephone M2 looked and felt like a premium phone but offered middle-of-the-road performance, while the more recent Vowney had power to spare – as well as 4GB of RAM – but was saddled with a mostly plastic casing that felt a little cheap. With the P9000, however, the company finally seems to have struck the perfect balance between power and design. 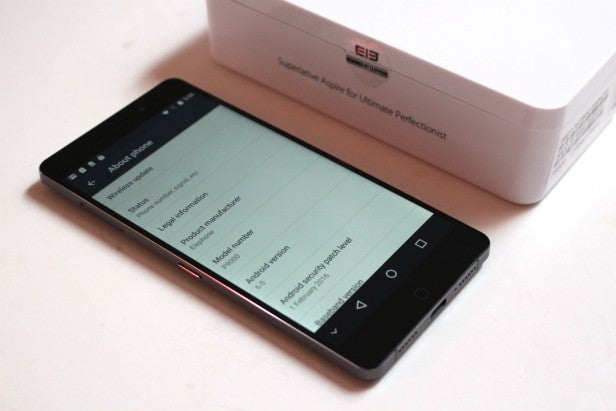 The P9000 follows the current trend in the Android arena for metal-bodied handsets, boasting a metal chassis that’s backed by a plastic panel.

Around the edges of the phone you’ll discover a subtle chamfered effect, as well as the usual buttons and inputs. On the right-hand side sit the power key and volume rocker, while on the opposite side there’s a button that can be configured to be a one-press shortcut to open pretty much any application you desire. Handily, a long-press of this button also puts the handset into silent mode, not entirely unlike the “mute” switch found on iPhone models.

On the top of the handset you’ll find the ubiquitous 3.5mm headphone jack, while on the bottom resides the reversible USB Type-C data and charging socket – a future-proof element that even the recently released Samsung Galaxy S7 doesn’t include. Flanking this port are two grilles, one housing a speaker, the other the in-call microphone.

Spinning the P9000 around reveals a plastic rear panel, which has a texture that takes some getting used to. It’s a matte-effect surface, which at first glance looks like it should be soft – but it isn’t; to describe it as very fine-grain sandpaper wouldn’t be a million miles from the truth. I actually quite like it since it increases grip, but it also picks up marks and scratches a little too easily.

On the back you’ll find the Sony-made 21-megapixel camera – complete with LED flash and laser auto-focus – and the fingerprint scanner. 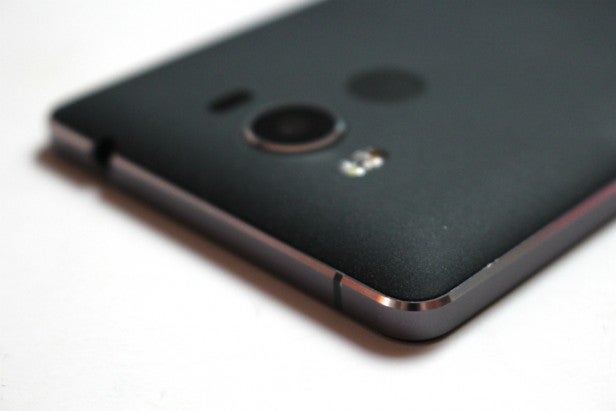 Strange choice of back panel texture aside, the P9000 looks and feels like a phone that should cost much more than £200, and it arguably gives the likes of HTC, Samsung and LG a run for their money in terms of overall design.

Dual-SIM functionality is a mainstay of the Chinese mobile market, and the P9000 offers support for two micro-SIM cards.

However, if you’d rather expand your available storage you can use one of those SIM slots for a microSD card, neatly augmenting the amount of space available for photos, music and other data.

Fingerprint scanners are becoming fairly commonplace on budget Android devices – the Elephone Vowney and Elephone M2 each had one – but it’s clear that companies such as Elephone are perhaps struggling to implement the tech as effectively as their larger rivals. 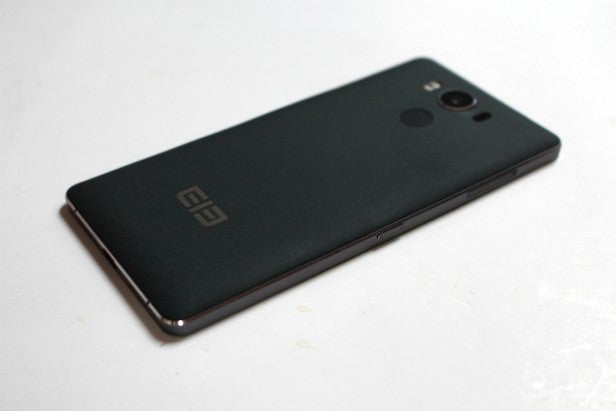 The scanner on the P9000 often requires a second or even third tap to register your fingerprint and unlock the device, but at least it can be used to wake the phone even when the screen is off. You can also use it to verify payments on the Google Play Store, thanks to the fact that the phone has Android 6.0 installed; when Android Pay hits the UK, you’ll be able to team it up with the NFC chip to make contactless payments in shops.

Elephone proudly states that the P9000 has a 5.5-inch Full HD, LG LTPS LCD on the device’s Apple-like plastic packaging, and it has good reason to to shout about it – this screen is absolutely superb, even by upper-tier standards.

Colours are incredibly punchy, contrast is excellent and viewing angles are rock-solid. When the adaptive brightness setting is enabled, things can get a little dim, but at mid-to-full brightness this display positively sings. It’s easy to view in directly sunlight, too. 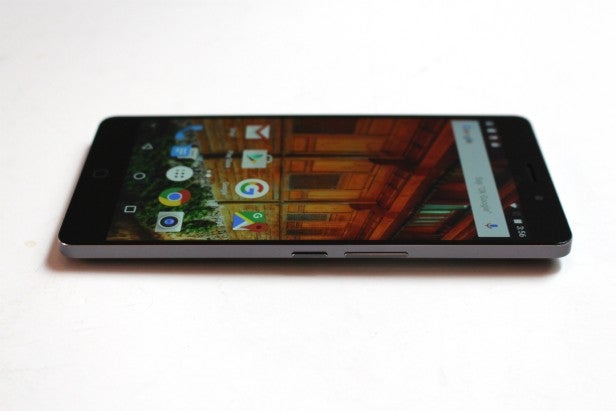 The manufacturer is also keen to point out that the phone has incredibly slim bezels – 1.6mm, in fact – on the left and right sides of the screen, which ensure that it isn’t too wide, even for a phablet-class handset. It’s still pretty sizeable in the hand, but it certainly feels easier to handle than some of its big-screen rivals. In fact, placed alongside the Galaxy S7 – which has a 5.1-inch screen – the P9000 is only marginally taller.

Like previous Elephone handsets, the P9000 comes with touchscreen gesture commands that allow you to open apps while the display is off.

For example, tracing a “C” shape on the sleeping screen will automatically boot up the camera. These shortcuts are simple enough to memorise and have the potential to be incredibly useful – provided you don’t use any kind of screen-lock security. Doing so means that even when you input the gesture, you have to unlock your device to get to the app, which kind of defeats the purpose. Still, it’s neat all the same. 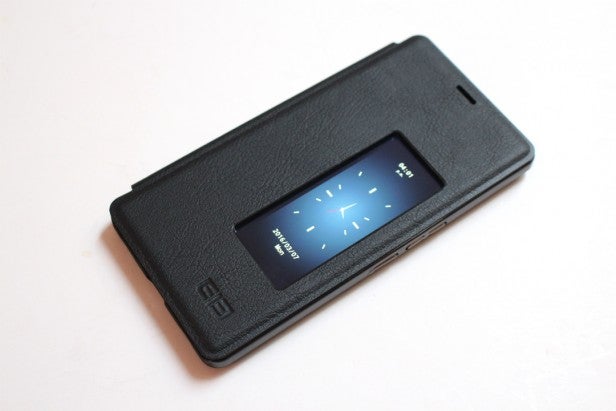 Unusually for such a low-cost handset, the P9000 ships with Android 6.0. The presence of Marshmallow means you get features such as Google Now On Tap and the battery-saving Doze mode. However, Elephone has confused matters somewhat by including its own granular app permissions system from its Android 5.1 phones, and this clashes with the built-in version that ships with 6.0 as standard. Thankfully, you can switch off Elephone’s manager to avoid any conflicts.

Elsewhere, Elephone has taken the same approach that it did with the M2 and Vowney, by presenting an almost stock version of Google’s mobile OS.

There’s a one-tap option in the Recent Apps menu that shuts down all running processes, and the Settings menu has a few new entries such as gestures and button shortcut customisation, but on the whole this is similar to the software that ships on the Nexus 5X and 6P.

Elephone has even been quite restrained with the apps it preinstalls; you get a flashlight, FM Radio, backup program, pedometer, sound recorder and Elephone Service app – and that’s about it. In fact, the phone itself is somewhat barebones the first time you switch it on – a blank canvas ready for your own personal preferences. 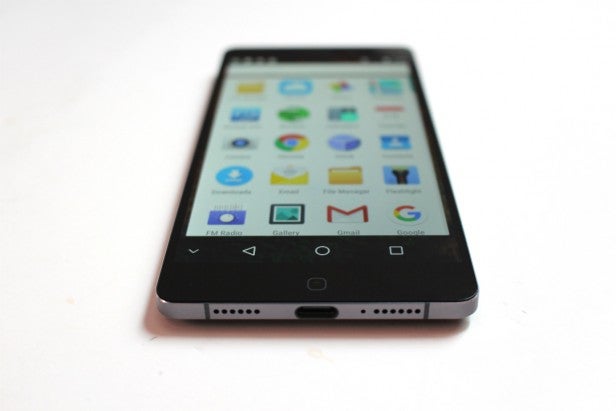 Elephone’s Turbo Download feature is an interesting addition to Android – it allows you to combine your network and Wi-Fi signals to boost the speed of downloads. If you’re in an area where the 4G signal is strong and you have access to a wireless hotspot it really makes a difference, but I forgot to switch if off on a few occasions and my data allowance took a bit of a beating.

The way the P9000 handles the usual Android commands of back, home and multi-tasking is worth a mention, too. By default, these icons don’t appear on-screen – instead, the single capacitive button found below the screen covers the three main commands.

A single tap on this button will take you back, while double-tapping brings you back to the home menu. A long press, on the other hand, opens the multi-tasking menu. It’s an elegant solution, but one that feels a little pointless – after all, there is space either side of this button for the back and multi-tasking commands, so why not include them?

Also, it’s impossible to activate Google Now (usually done with a longpress on the home button) via this interface. Thankfully, you can switch to the traditional on-screen icon bar that sits at the bottom of the display, just like on the Nexus 5X and 6P. This can be collapsed if you so wish, and reinstated with an upwards swipe from the bottom of the screen. 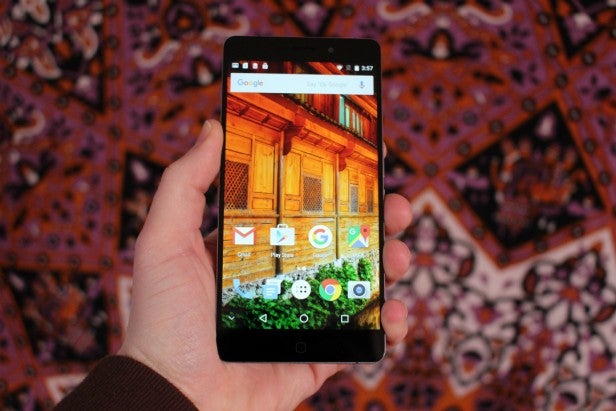 Despite the phone’s Chinese origins, I had absolutely no issues in setting up the P9000 in the UK. It connected to my provider’s network without any problems and, for all intents and purposes, behaved exactly like a phone purchased from a British high-street store. Given that rival Chinese manufacturer Xiaomi’s phones often require additional legwork to get them operating correctly here in the UK, that’s a pleasant surprise.