What is the Elephone M2?

All of this is powered by a MediaTek MT6753 1.3GHz octa-core chipset, and the phone comes with Android 5.1 installed.

Despite the impressive specs, the M2 can be picked up for around £120 from importers, putting it in competition with a number of great budget Android handsets, including the stellar Motorola Moto G.

Elephone, like a few other Chinese budget phone makers, doesn’t have the best reputation when it comes to build quality and materials, but that’s something the company is clearly very keen to change with the M2. It boasts an all-metal construction which delivers a premium look and calls to mind the likes of the iPhone 5S and Sony Xperia Z5.

The unibody design is broken on the back by two strips of plastic which allow the internal antenna to function correctly – the topmost strip also houses the Sony-made MX214 13-megapixel camera and LED flash.

The top edge of the phone is where the 3.5mm headphone socket resides, while on the bottom you’ll find the mono speaker and Micro USB port. The volume and power buttons are unusually situated on the left-hand edge of the device as opposed to the right, where you’d normally expect to find them.

In the M2’s case, the right edge of the phone is home to the Micro SIM card tray. This offers dual-SIM capability – another hallmark of phones aimed at the Chinese market – but you can choose to insert a microSD card in one of the trays, should you prefer. Expandable storage is always a welcome feature on smartphones, but with a whopping 32GB of space coming as standard, you might not actually need it. 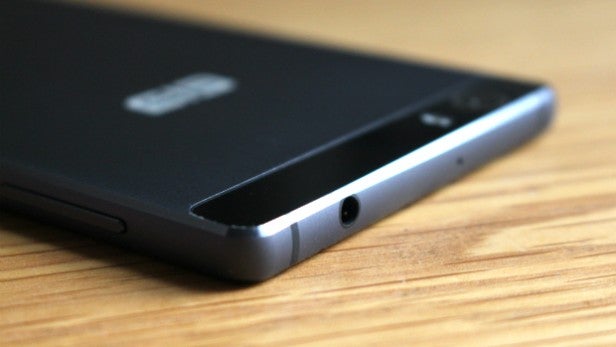 As you might expect, the front of the M2 is largely taken up by the 5.5-inch 1080p screen. Above this is the earpiece, while directly below you’ll notice the Home button, which contains a fingerprint scanner. On either side of this there’s a capacitive button, although Elephone has ignored the usual Android iconography.

What makes things even more confusing is that the left-hand button – normally associated with the app menu – actually performs the same action as a long-press on the screen. To access the Recent Apps menu you have to hold down the Home button. The right-hand button acts as the “Back” command, as per normal.

While Elephone has clearly imitated other handsets with the M2’s design, it’s produced a device which looks and feels fantastic in the hand, and certainly puts pretty much every other budget device in the shade in terms of pure aesthetics and build quality. Because it’s a totally sealed unit there’s no creakiness to speak of, and the only real complaint I have is the rather cheap feel of the fingerprint scanner – it also sits a little too low in the casing.

The M2’s display maintains the impression of quality established by the metal body. It’s an LG-made panel with a Full HD resolution of 1080 x 1920 pixels, and measures 5.5 inches from corner to corner. Viewing angles are absolutely rock-solid, while colours look bright and punchy. Despite not being an AMOLED screen, contrast is also excellent.

We’re seeing more and more low-cost phones shipping with above-average-quality screens, and the M2 continues this welcome trend. Pin-sharp, bright and large enough to please the growing legions of phablet fans, the M2’s screen is hard to find fault with. The use of Gorilla Glass 3 should also fend off any serious marks and scratches. 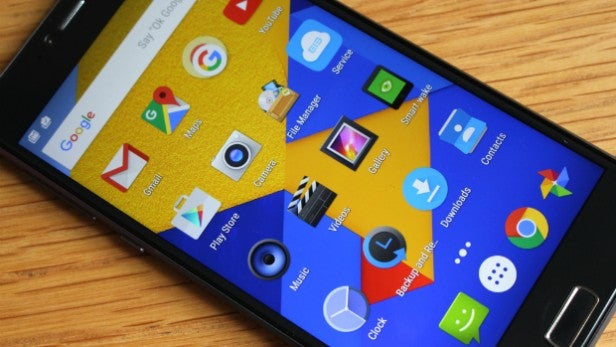 Elephone has included its own “Smart Wake” application which allows you to double tap the display to turn it on or draw a gesture to quickly open a particular app. For example, tracing the letter “M” on the screen while it’s switched off will boot up the default music player, while drawing a line downwards will start up the camera.

It actually works really well, but there’s a predictable catch for the more security-conscious among us – if you have a PIN or fingerprint lock enabled, you’ll have to follow the gesture with that before the phone will execute the shortcut command. As a result, I found it easier to simply unlock the phone with my fingerprint and manually open the app I wanted.

As is common with some of the cheaper Android devices we’re seeing coming out of the Far East right now, the M2 ships with a largely stock version of Google’s mobile operating system. It’s running Android 5.1, which isn’t the latest version, but seeing as very few other handsets have been upgraded to Android 6.0 Marshmallow, it’s not a deal-breaker by any means. What’s more worrying is that Elephone doesn’t have a great track record of supporting its older products when it comes to firmware updates, so it’s unlikely that the M2 will ever see Android Marshmallow.

The M2 provides what is essentially a blank slate as far as apps are concerned. There are some pre-loaded offerings – such as a file manager, FM radio, backup application and Elephone’s own feedback app – but on the whole you’re expected to populate that app drawer with your own selections, which marks a refreshing change from the flood of unwanted bloatware that is typically forced on Samsung, Sony and LG’s customers.

The downside is that newcomers might not realise that they’re expected to source apps from the Google Play Store, and out of the box the M2 feels a little half-finished and incomplete in terms of software. 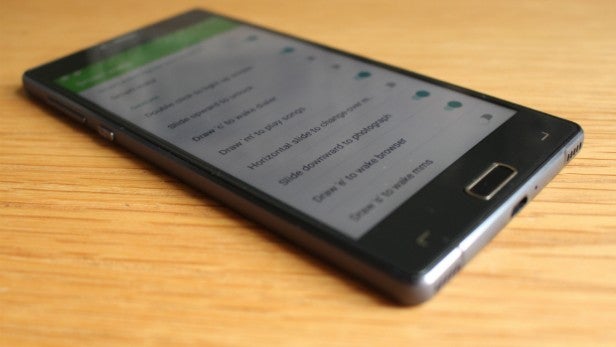 While the “ELE UI” OS is a close match to stock Android, it’s not exactly the same – there’s no Google Now functionality, for example. Thankfully you can add this by downloading the Google Now Launcher from the Google Play Store, ensuring that the super-useful voice-activated personal assistant is never more than a swipe (or “OK Google” voice command) away. Bizarrely, though, it’s impossible to change the lock screen wallpaper, so you’re stuck with the default option, which is a vinyl record. Could be worse, I guess.

Connectivity is always a concern when buying a Chinese phone, as not all handsets produced for the Asian market support the 4G bands we use in the UK. Thankfully, the M2 bucks that trend and offers full compatibility with networks in this part of the world – even O2, which is something that can’t be said for rival Chinese manufacturer Xiaomi’s current range of phones.

The M2’s MediaTek MT6753 64-bit chip is clocked at 1.3GHz and comes with an ARM Mali T720 GPU. Such specs are pretty unremarkable when compared to 2015 and 2016’s Android flagships, but at the lower end of the spectrum they’re more agreeable – especially when you take into account the fact that the phone comes 3GB of RAM, which certainly helps maintain smooth performance when switching between applications.

Benchmark tests don’t paint a picture of this being a processing beast. Geekbench 3 awards the M2 a multi-core score of 2,865 and a single-core score of 625, which places it well behind the leading lights of the Android arena. However, those results still beat pretty much any budget handset you can currently buy on the UK high street.

The inclusion of a fingerprint scanner for security is impressive, but the performance isn’t quite as good as those sensors seen on other phones. Despite a fairly thorough registration process, the scanner often failed to recognise my print. The actual contact area is quite small, which could contribute to this issue, but a more likely explanation is that the tech and software involved isn’t quite as good as that seen on Samsung and Apple’s handsets.

Because Android 5.1 doesn’t come with native fingerprint support – only present in Android 6.0 as standard – Elephone has had to create its own solution. However, when it does work, the scanner is quick to respond and it’s nice that you can unlock the phone from sleep simply using a tap of your digit. 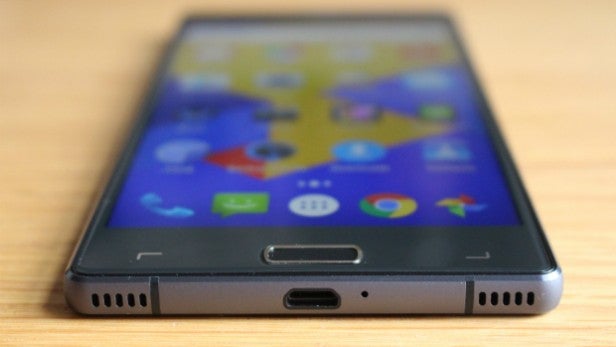 Although a fingerprint scanner is on-board, there’s no NFC, so you won’t be able to use the M2 to make contactless payments when Android Pay eventually launches in the UK. Instead of NFC the phone is equipped with MediaTek’s HotKnot, which transmits data through the handset’s capacitive touchscreen. It’s an interesting concept, but NFC has been widely accepted as the standard for contactless data transfer, so HotKnot could be something of a dead-end, at least in the West.

The phone’s main speaker is incredibly loud, and its positioning on the bottom edge of the handset means that it won’t be muffled when the phone is upside down in your pocket. I had no issues hearing it in busy, noisy environments – in fact, the message tone was so boisterous that it made quite a few bystanders jump when it went off.

The audio is nice and bass-heavy, but at maximum volume there’s some noticeable distortion on certain sounds. The earpiece is similarly punchy, but call quality isn’t quite as good as it is on the Galaxy S6 or iPhone 6S.

Like a great many other low-cost Chinese phones, the M2 is packing a Sony IMX214 camera with a 13-megapixel sensor and LED flash. The camera is quick to focus as long as you have the HDR option disabled – turn this on and there’s quite a pause as the phone processes the shot. It’s tempting to leave it off altogether, but in many conditions HDR offers superior results; without it, images tend to be a little on the dark side. 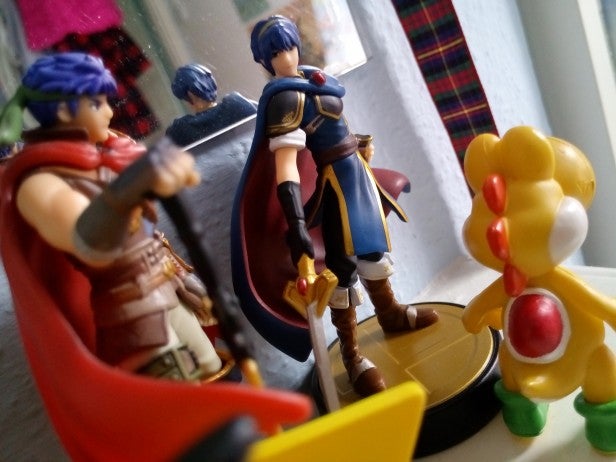 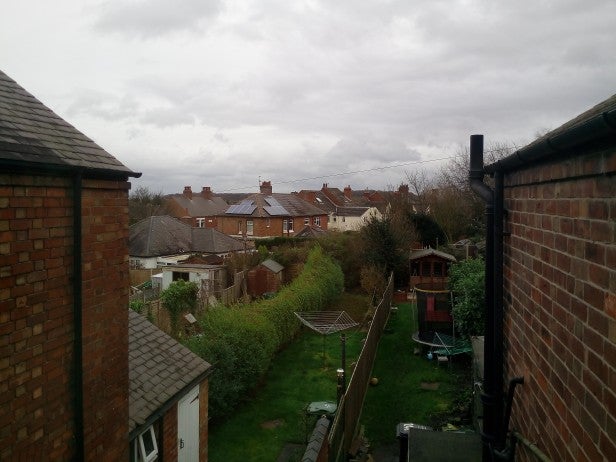 Image quality is actually very competent for such a cheap handset, and the built-in camera software is blessed with plenty of options – certainly more than you’ll find in the stock Google camera app.

Face detection, anti-shake, gesture detection, smile detection and filters are all on offer, and the 5-megapixel front-facing snapper is more than adequate for selfies and video calling. Full HD 1080p video recording is also included with the rear-facing snapper.

The M2’s 2,600mAh can hardly be described as generous, especially when you consider that it has to power a roomy and bright Full HD 5.5-inch screen. Starting a day at full charge, I found that the M2 would start running on empty around 8pm after a fairly typical day of useage. There’s no quick-charging capacity, so topping up the battery from nothing to 100% takes around 3 hours.

During a video test I streamed a HD movie with volume turned to maximum and the battery lost around 35% of its capacity in the space of an hour, so don’t expect to use this as a media player when you’re out and about. 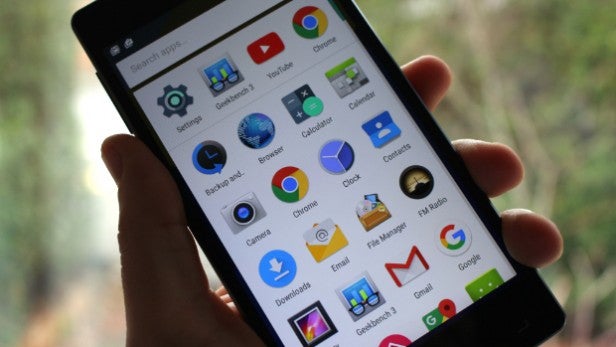 Should I buy the Elephone M2?

The Elephone M2 might not be perfect, but for the cost it offers a heck of a lot compared to the other budget handsets available officially in the UK. With its solid metal unibody, decent specs, above-average camera and fingerprint security, the device is an absolute steal for the £120 asking price.

While the disappointing battery life, occasionally fickle fingerprint sensor and slim prospects of seeing an Android 6.0 upgrade count against it, the M2 is the ideal purchase for anyone who isn’t fussy about being on the cutting edge but still desires a phone which is responsive, free from bloatware, can take decent photos and looks and feels good in the hand.

Good-looking and well-specced for the price, this cheap and cheerful phone gets a definite recommendation for cost-conscious buyers.