Budget tablets are often lumbered with one of Google’s older operating systems, but we’re pleased to report that Android 5.1 Lollipop is the Harrier’s OS of choice. Better still, EE’s left it almost totally pure.

There’s no irritating, in-your-face custom UI sat on top of the software, which is just the way we like it. The Harrier delivers a Nexus-like user experience that’s straightforward and fuss-free.

Impressively, it also comes with very little bloatware. Not surprisingly, EE has taken the liberty to preinstall a handful of apps – but that’s all. You can’t delete any of them, but you can hide them from your homescreen and never think about them again.

The most notable of these is My EE. The app provides fast access to the mobile operator’s online services, allowing you to top up, pay bills and monitor your data usage.

Music player Deezer is also on board, enabling you to listen to your favourite tunes on the Harrier, as well as discover new artists and create playlists. Amazon, Kindle, Amazon Local and Amazon Music are included too, as is the Lookout security app. 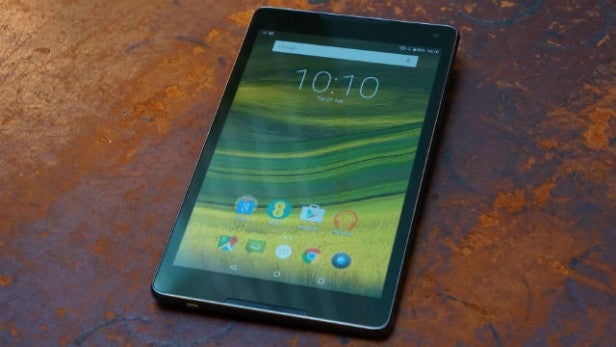 Running the show is the same octa-core Snapdragon 615 processor packed into the EE Harrier smartphone. In the Harrier Tab, it comes paired with 2GB of RAM, and it should be more than powerful enough for your needs.

However, the Harrier isn’t quite as impressive in the graphics department, reaching 7,402 in the 3DMark Ice Storm Unlimited test. While this puts it way behind the 15,000 or so of high-end tablets, it still fares better than the Tab Prime 6 (3,987).

In everyday use, including browsing the web and playing YouTube videos, performance is smooth and fluid. Even the complex 3D games Real Racing 3 and Dead Trigger 2 play smoothly at a lower graphics setting, although Asphalt 8 is a little laggy. However, it’s not bad enough to ruin gameplay, and most gamers will be pleased with what the Harrier can handle.

The back of the tablet warms up during even light use, but it never became worryingly hot in our time with it. 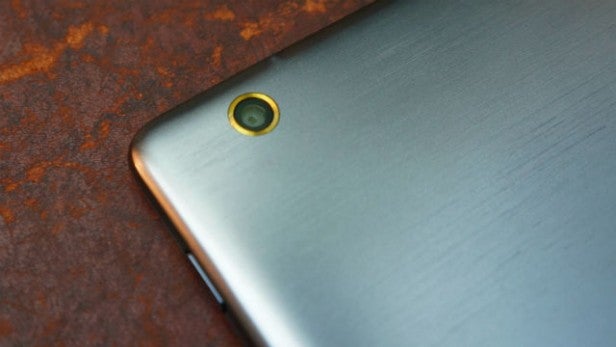 EE’s put a little effort into making its main camera more appealing than the plain, uninspiring sensors attached to the backs of most tablets. The Harrier Tab’s 8-megapixel rear snapper comes with an HDR mode, designed for improved handling of tricky light situations.

In short, it should enhance the darkest areas of a picture and rein in the brightest spots, and it does this well. Unfortunately, pictures still come out a little soft, so we’d recommend sticking with your smartphone camera for shareable snaps.

The 2-megapixel camera up front is good enough for Skype video calls, but again the images it captures are far too fuzzy to share on Instagram or Facebook.

The Harrier Tab squeezes in a 4,650mAh battery, which doesn’t sound brilliant on paper. The fact that modern smartphone batteries, which are only slightly less capacious, tend to offer a single day of use is a sign of what to expect.

As feared, stamina isn’t the best. In Airplane mode, and with a standard-definition video playing on a loop, the Harrier lasted just over four hours. Disappointing. 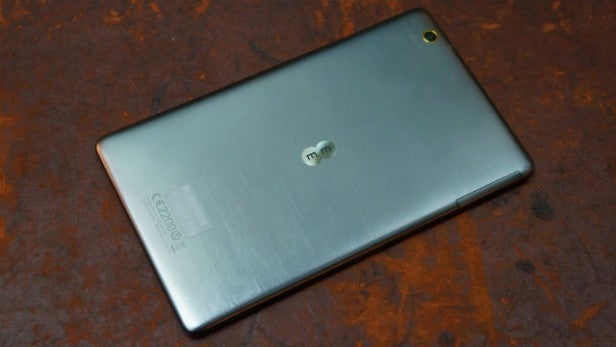 It keeps going for much longer in mixed use, including browsing the web and reading news. However, if you plan to watch TV shows on the Harrier while travelling to and from work, you’ll have to charge it at least every other day.

Unfortunately, it’s a slow charger too. A 30-minute blast took our review sample from flat to only 19 per cent, while a full charge required four hours of patience.

In portrait mode, the micro-USB port sits on the bottom edge, with the headphone jack on the top edge. A protective cover towards the top of the left-hand side hides the SIM tray and the microSD card slot, which you can use to boost the 16GB of internal storage.

One of the Harrier’s biggest attractions is 4G connectivity, which you don’t often find on a tablet of this price. It’s also LTE CAT 4 enabled, offering real-world download speeds of up to 60Mbps through EE’s Double Speed 4G network. 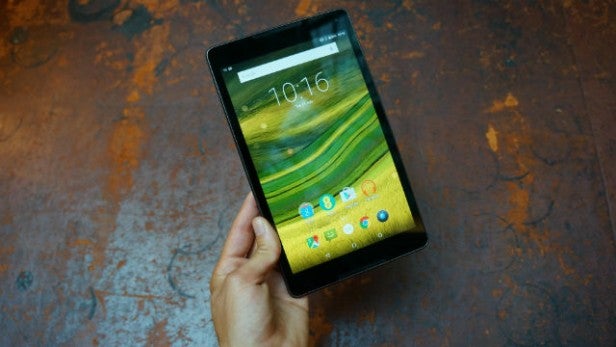 Should I buy the EE Harrier Tab?

If you’re restricted by a tight budget and don’t mind being locked into one of EE’s plans, the Harrier Tab could be perfect for you. Following an up-front payment of £29.99, you can snap it up from as little as £13 per month. For that you get 4G, a decent screen, solid performance and a near-pure Android experience.

That said, it’s not perfect. The speakers in particular are disappointing, while battery life is also hardly worth shouting about. Build quality is another slight concern, although you can rest assured that the Harrier won’t just fall apart when the wind starts blowing.

It’s certainly superior to the Vodafone Tab Prime 6, and is an enticing alternative to the excellent Hudl 2 because Tesco’s tablet isn’t 4G-enabled. If super-fast connectivity is important to you, go with EE.

A cheap 4G tablet that’s impressive, despite a couple of weaknesses.