What is the Karbonn Sparkle V?

The Karbonn Sparkle V is one of the first handsets to launch under Google’s Android One program. Aimed at emerging markets, the Sparkle V, Micromax Canvas A1 and Spice Dream UNO all share the same specs and promise a stock Android OS experience.

In the UK, the Sparkle V is available to buy through Amazon for £129.99 SIM-free, which puts it in the same price bracket as phones like the Nokia Lumia 635 and the first-generation Moto G.

While it’s great to have more options at the affordable end of the market, we’re not convinced the Sparkle V is the handset to carry the Android One flag.

The Sparkle V isn’t much of a looker, blending into the sea of uninspiring, bland, cheap Android phones. It’s not a big surprise that design was low on the list of priorities, but the likes of Microsoft and Sony have shown you can make an attractive cheap phone.

From the front, there’s a familiar black bezel, which is thicker above and below the phone’s screen. Around the back is a dark blue, matte plastic back plate, which can be a little slippery to the touch and is a magnet for greasy fingerprints. You can also grab the Sparkle V in red and white, but we can’t imagine that does much to improve the overall look.

The back plate is removable, clipping away from the bottom of the handset to reveal the removable battery, microSD card slot and dual-SIM options. The latter is something we’ve seen pop up in phones like the Moto G 2, giving users the option to switch between SIM cards from different regions to take advantage cheaper tariffs. This should make it useful for regular travellers who don’t want to get stung by big roaming charges. 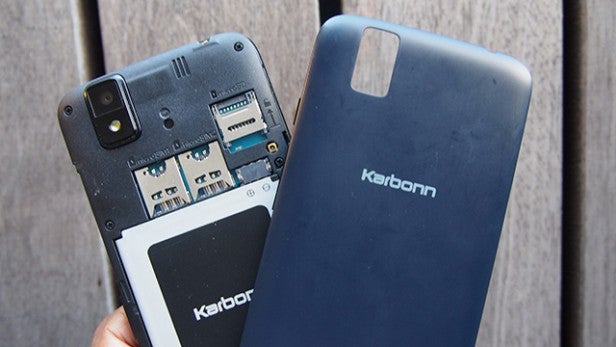 The microSD card slot is usually a luxury on cheap phones, so it’s good to see one make an appearance on the Sparkle V. That is until you realise how much of a necessity it is to have a microSD card installed. There’s just 4GB of onboard storage, with around 2GB that’s actually usable. Content like photos and games has to be stored to an SD card. If you buy a 32GB one, that’s going to add £10-15 to the overall price of the phone.

One thing you needn’t worry about with the Sparkle V is hogging up trouser pocket space or it feeling particularly uncomfortable to use. It weighs just 107g and measures in at 9.2mm thick, so it’s not exactly super-slim compared to something like the iPhone 5S, but for a 4.5-inch phone it’s no strain reaching your fingers across the screen.

Aside from that, there’s nothing out of the ordinary to look out for here. The standby button and volume rocker sit on the right edge, with the Micro USB charging port down the bottom and 3.5mm headphone jack down the bottom. The single speaker sits around the back, with the 5-megapixel camera and LED flash up top. 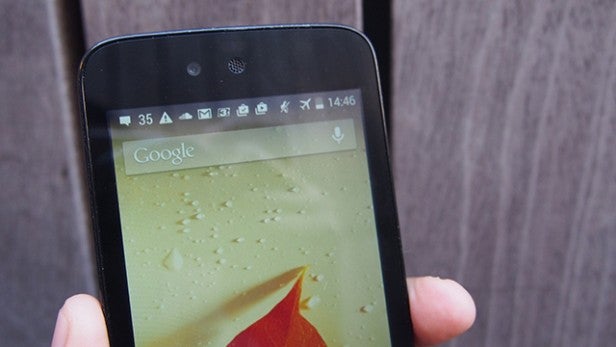 The Sparkle V features a 4.5-inch IPS LCD screen with a 480 x 854 resolution and 218ppi pixel density. To put that into perspective, the similarly priced first-generation Moto G has a 4.5-inch 720p HD screen and is one of the best smartphone displays you can lay your hands on at the lower end of the smartphone chain.

That’s not to say that the display on the Sparkle V is bad. In fact it’s one of the better ones we’ve seen at this resolution, but you can get more for your money elsewhere. The differences in quality compared to the Moto G are more noticeable when you look up close and see some of the fuzziness around icons and the not-so-bright white web pages. We ran a few videos on it and while there’s decent clarity, colours lack punch and it actually has more in common with Sony’s Xperia M2 for overall performance.

Viewing angles are not fantastic, despite having IPS display technology, though outdoor visibility is good without any truly horrible glare. Brightness is more than adequate for nighttime use, but you’ll want to go easy on cranking it up to the maximum when you find out about the battery situation…