A powerful and personal fan, the Dyson Pure Cool Me blows purified air directly at you, keeping you cool and making your environment cleaner, but you do miss out on the smart features that Dyson’s other purifiers have.

Previous models of Dyson’s purifying fans, such as the Pure Cool Link, have all been fairly large in size. However, with the Dyson Pure Cool Me, the company has enlisted new tech to present a smaller, more personal fan and air purifier.

Gone is the Air Multiplier technology of previous fans, replaced with Core Flow tech, which is inspired by the Harrier Jump Jet. It blasts super-concentrated air directly at you, without the need for such a large fan head.

Superb performance and the low noise levels we’ve come to expect from Dyson are welcome, but the Pure Cool Me lacks a few features of its predecessors, including app control and detailed air readouts.

Dyson Pure Cool Me Design – Like no other fan

You’ve got to hand it to Dyson: this is a company that knows how to make interesting and exciting looking products. With the Pure Cool Me, Dyson has produced a fan like no other – which is impressive considering this is the company that brought us the bladeless fan.

Here, the head of the fan has a convex surface mounted inside a ball head. Although the base of the fan is quite chunky, the head is a lot smaller than on previous Dyson desktop fans, making the Pure Cool Me easier to place on a desk or bedside table (401 x 254 x 247mm).

There’s no room on the fan head for the remote control, so Dyson has instead placed the remote on a magnetic pad on the front of the cylindrical body. Below this is the LCD screen, displaying fan speed and the remaining filter life. 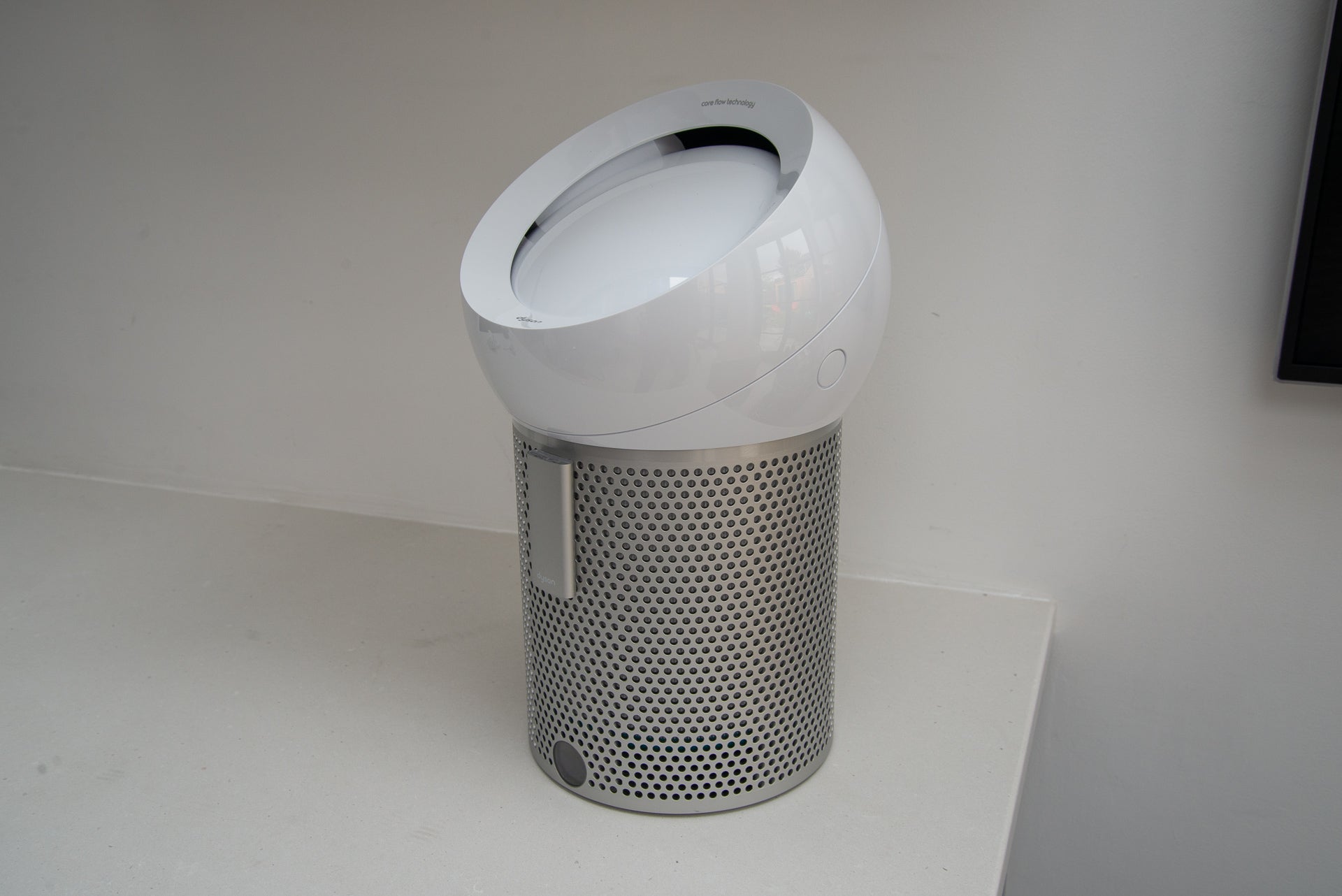 Dyson Pure Cool Me Features – All of the basics 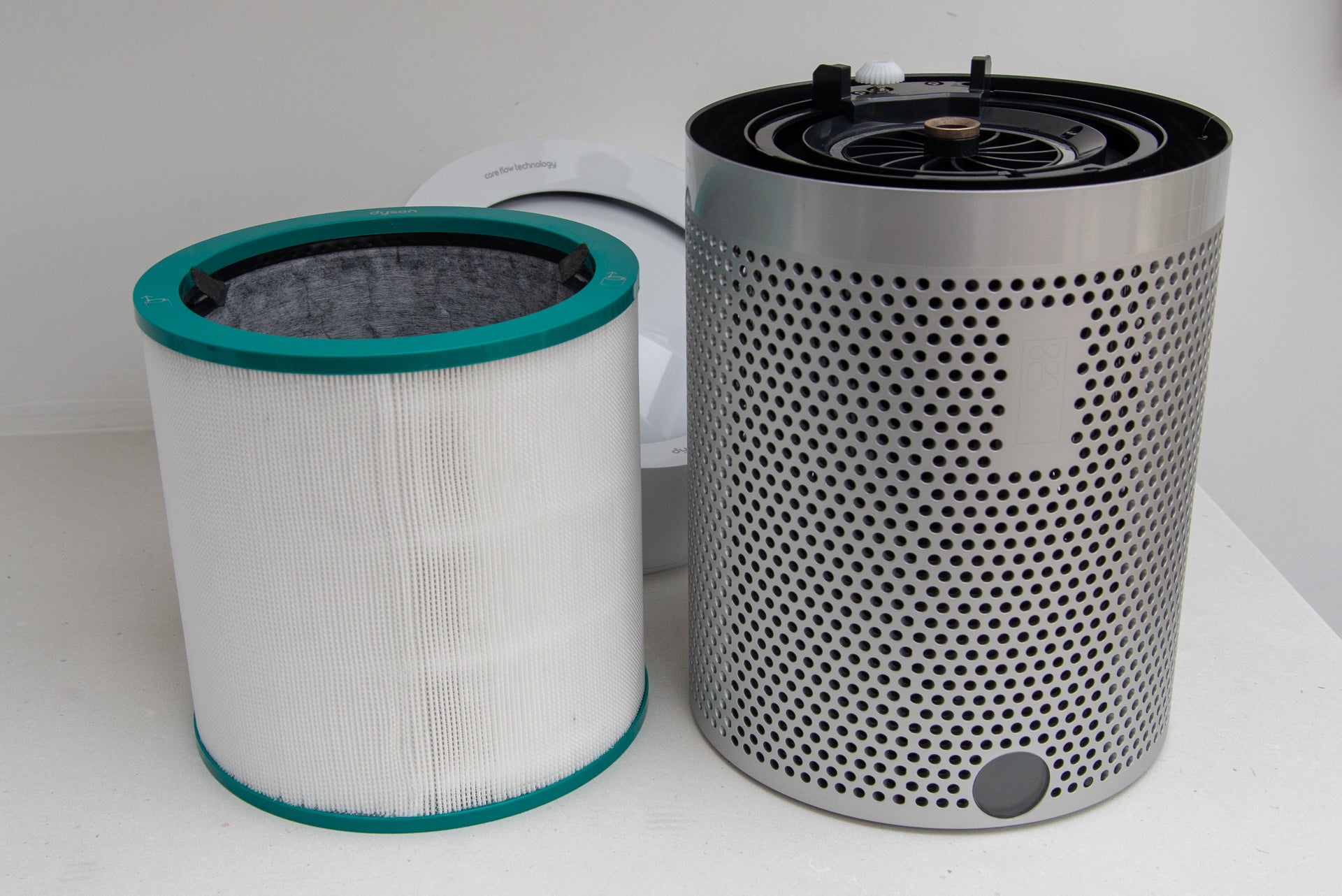 Key to the way that the Dyson Pure Cool Me works is Core Flow. Inspired by the Harrier Jump Jet, Dyson engineers discovered that when two jets of air meet on a convex surface, they converge to create a high-pressure, focused stream of air. In practice, this means pinpoint control over the direction of that stream of air.

Sliding the plastic disc up and down changes the height of the stream, and the fan has a 90-degree oscillation mode to change where it’s pointing. 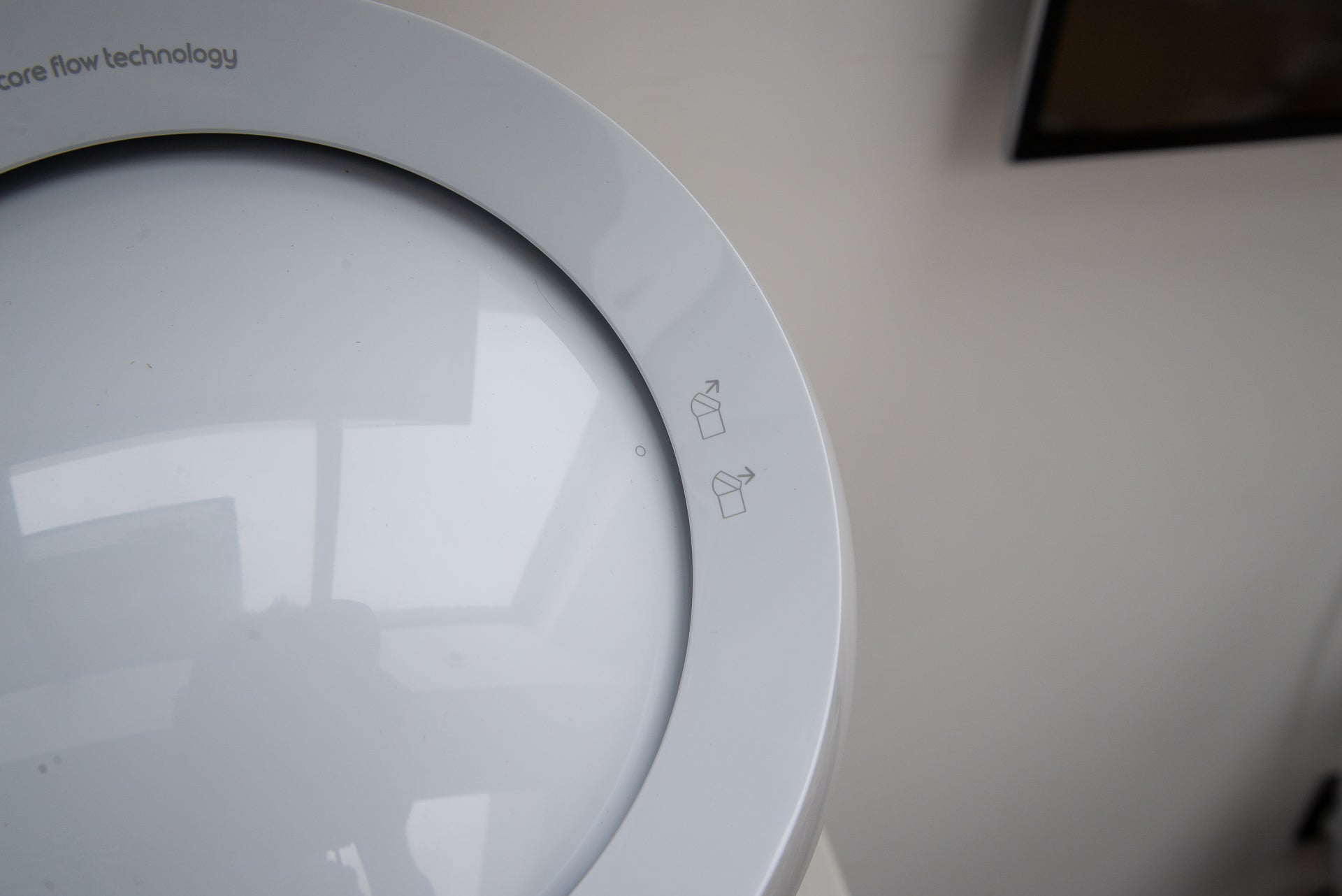 As with previous Dyson fans, control is entirely via the remote control – the only button on the fan is a power button. Using the remote you can set the fan speed (10 speeds), set a timer (30 mins, one hour, two hours, four hours and eight hours) and toggle oscillation.

There’s also a button to display the remaining filter life. Based on 12 hours’ use per day, it should last for around 12 months. However, your level of usage and how dirty the air is around you may result in it lasting longer or shorter than this. What the Dyson Pure Cool Me doesn’t have that the other air purifiers do is a display to show you air quality in your home. This is the reason the Pure Cool Me model doesn’t have an Auto mode; it can’t tell when the air’s dirty. 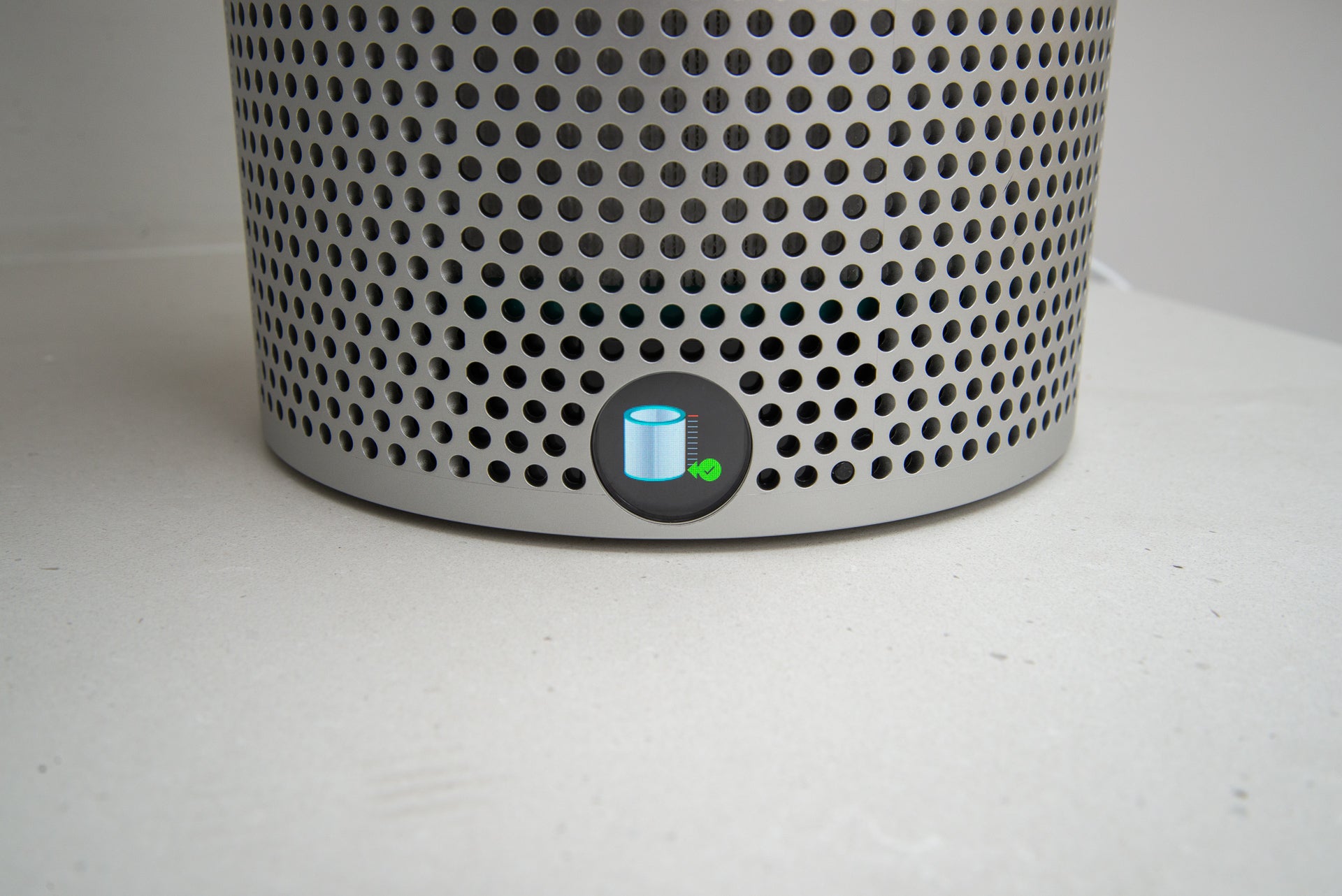 Since this product isn’t designed to clean the air of a room, there’s also no inverse mode to reverse air flow out of the back of the fan. As such, the Dyson Pure Cool Me isn’t so useful on a cold day, although the pinpoint airflow means that you could direct the stream of cool air away from yourself.

Think of the Dyson Pure Cool Me as more a personal fan that happens to blow purified air at you, rather than a product for cleaning the air in a room. Even so, the Dyson Pure Cool Me is capable of capturing 99.95% of ultra-ine particles in the air, sealing them in the filter’s activated carbon and glass HEPA layers.

There’s also no app control via this product, which means no Amazon Alexa control. According to Dyson, the main reason for this is because the Dyson Pure Cool Me is a personal product, so it will tend to be within the operating range. That makes sense and it helps keep the price down a little. 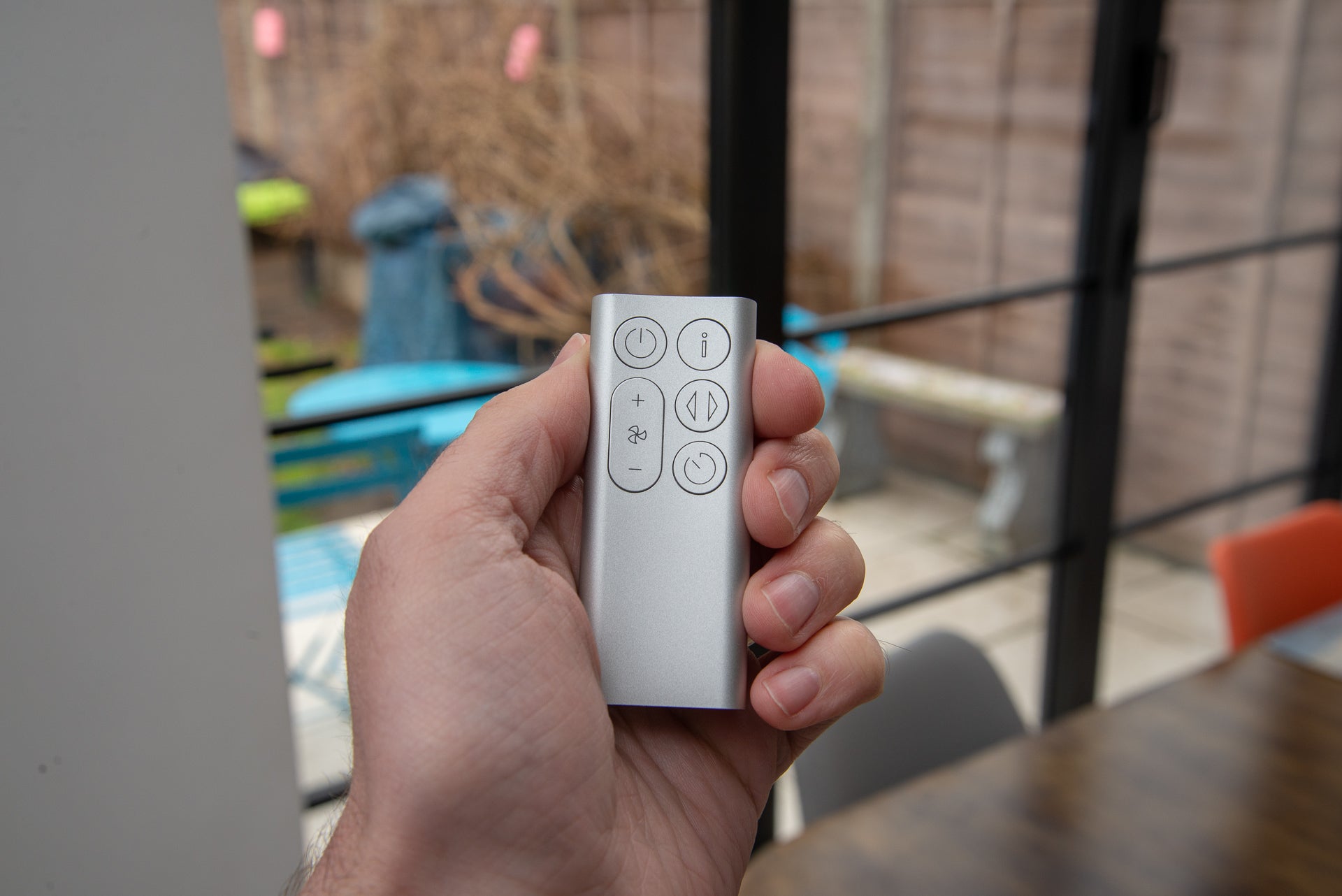 As a fan, the Dyson Pure Cool Me is rather impressive. Core Flow is quite incredible, giving a precise burst of cool air in any direction you want; move ever so slightly out of the sweet spot and you can’t feel a thing. As well as cooling just you, there’s a second advantage: the Pure Cool Me doesn’t blow bits of paper around on your desk or bedside table as other fans do.

Measuring fan speed on maximum setting, at 15cm away the fan pushed out air at an incredible 6.2m/sec; at 1 metre away fan speed was still impressive at 1.6m/sec. On minimum speed, there isn’t enough air flow to measure; just a gentle breeze. Sticking the fan up to speed two, I measured 1.6m/sec at 15cm, which is still enough to gently cool. 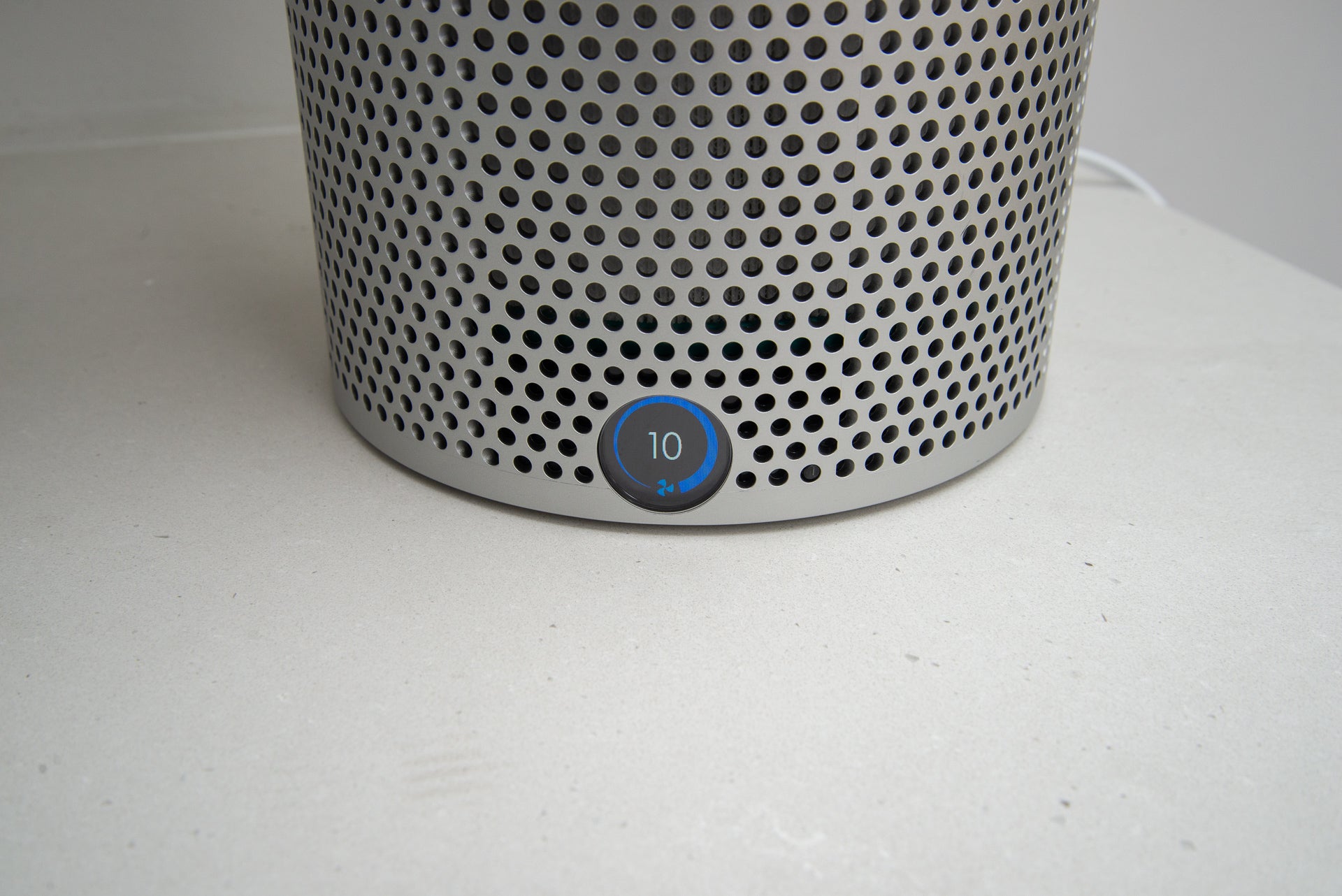 Sound levels are just as impressive. Measuring the Dyson Pure Cool Me on maximum speed at 63.5dB from 15cm shows how quiet this model is: you can talk over it. On minimum speed there’s just a gentle hum, and I measured it at 37dB.

To see how well the Pure Cool Me purified, I lit a smoke pellet and place it behind the fan. I could see the smoke getting pulled in and clean air coming out of the front without any leakage. It took 3mins 50secs before my Nest Protect measured a clean environment. That’s slower than the previous Dyson purifiers I’ve tested, but to be expected as the Dyson Pure Cool Me is more a fan that purifies rather than a whole-room air cleaner.

If you’re looking for a larger device to clean a room, then the Dyson Pure Cool Tower or Dyson Pure Hot+Cool – which also heats – are better options (my best air purifier guide has standalone purifiers, too). Yet, to compare the Pure Cool Me to these products isn’t particularly fair, since this isn’t the job it’s supposed to do.

Instead, the Pure Cool Me is a product that’s built to give a single person a burst of cool and fresh air. Working at a desk, it works perfectly, with its directional blast of air perfectly suited to hitting just yourself. The next-closest product to offer personal cooling is the Evapolar Personal Air Cooler, which uses evaporative cooling to chill the air. It works well and costs around half the price of the Dyson. However, it’s more difficult to position because it’s a cube with no fan adjustment, and it doesn’t purify the air.