A quality way to keep cool and filter out allergens in the air, the Dyson Pure Cool Tower is a great all-rounder.

What is the Dyson Pure Cool Tower?

While much focus on clean air centres around outside pollutants, you’d be surprised to discover the quality of the air indoors. From pollen entering your home to harsh chemicals in cleaning products, the air quality in your home can be rather unhealthy. This is where an air purifier such as the Dyson Pure Cool Tower comes in.

Designed as both a regular fan and an air purifier, this is Dyson’s second-generation air-cleaner. Improvements over the original Pure Cool Link include a more detailed display, showing you the level of pollutants in your home, and a purifier-only mode that stops cold air being blown at you.

The Dyson Pure Cool Tower uses Dyson’s now-distinctive bladeless design. It remains as impressive today as it did at launch. Dyson’s Air Multiplier technology directs airflow up and through the thin blade around the outside edge of the fan, creating a smoother blast of air. 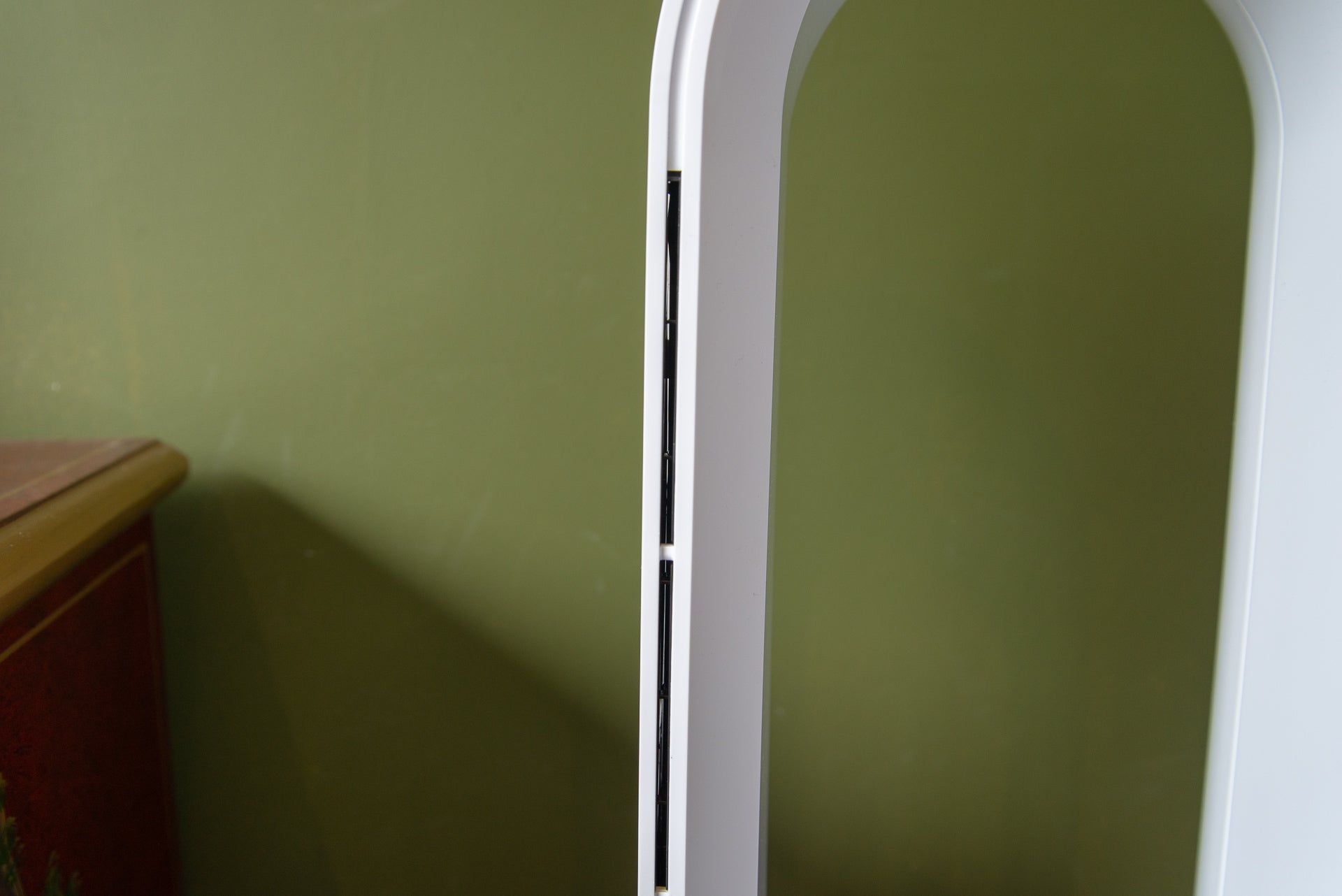 Solid construction and great looks complement the design, and the Pure Cool Tower is every inch the high-end air purifier you’d be pleased to put out on display.

Each part further splits down into two: an inner carbon filter for gasses, and an outer HEPA filter to capture small particles. Both filters should last around a year, assuming 12 hours of use, although the level of pollutants and overall runtime will affect this figure. Each filter costs £60 to replace. 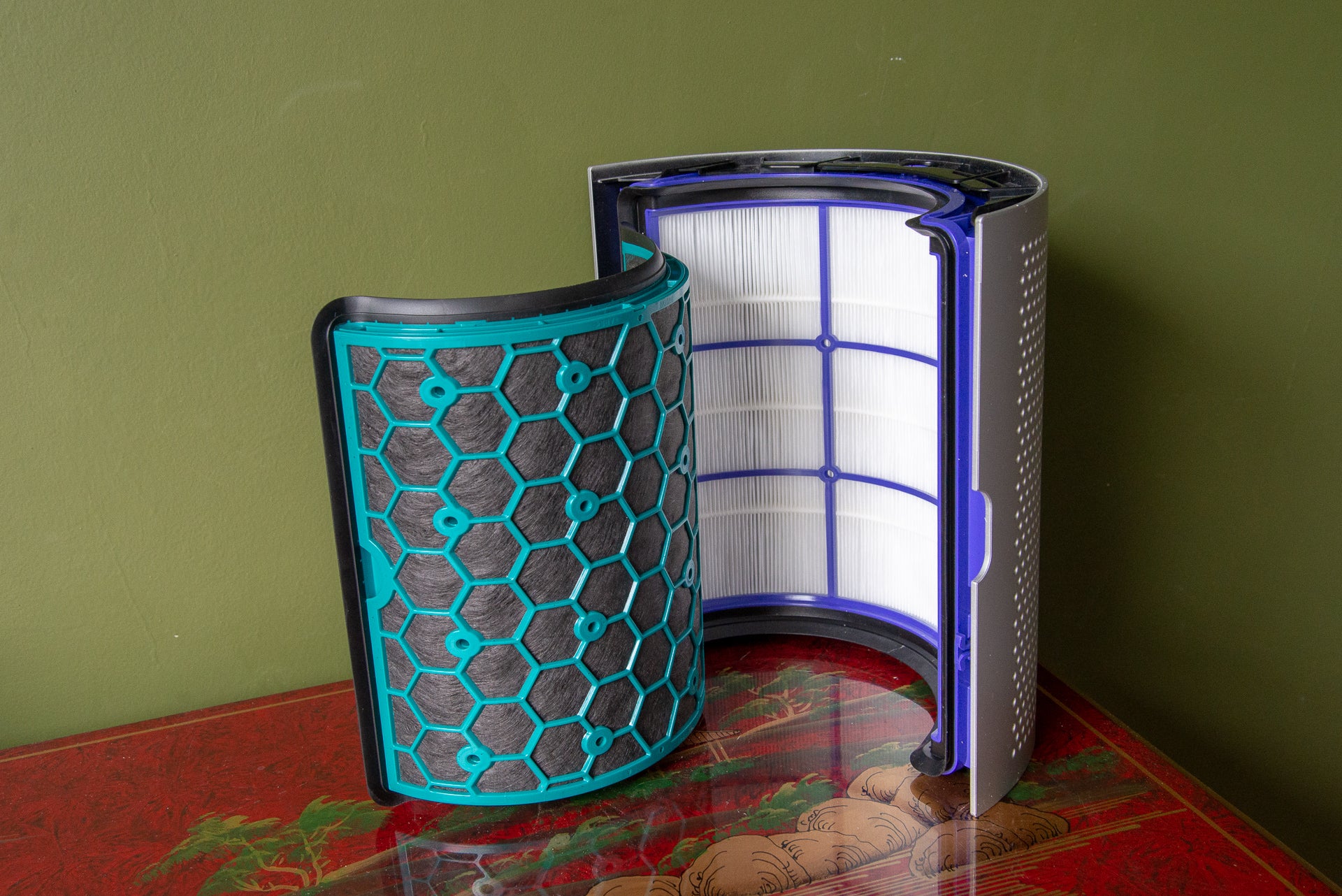 On the front of the fan is an LCD screen, which displays the current status. A simple graph gives an overview of how clean (or otherwise) your home is.

You can use the remote control to delve down into more detailed figures, and the Pure Cool Tower can display readings for PM2.5 (very fine particles less than 2.5-micrometres that can make their way into your lungs); PM10 (particles less than 10 micrometres, which can bring on asthma attacks and cause breathing problems); VOCs (Volatile Organic Compounds, harsh chemicals found in everything from cleaning sprays to old furniture); and NO2 (nitrogen dioxide, a gaseous pollutant from cars and fossil fuels that can cause respiratory problems). 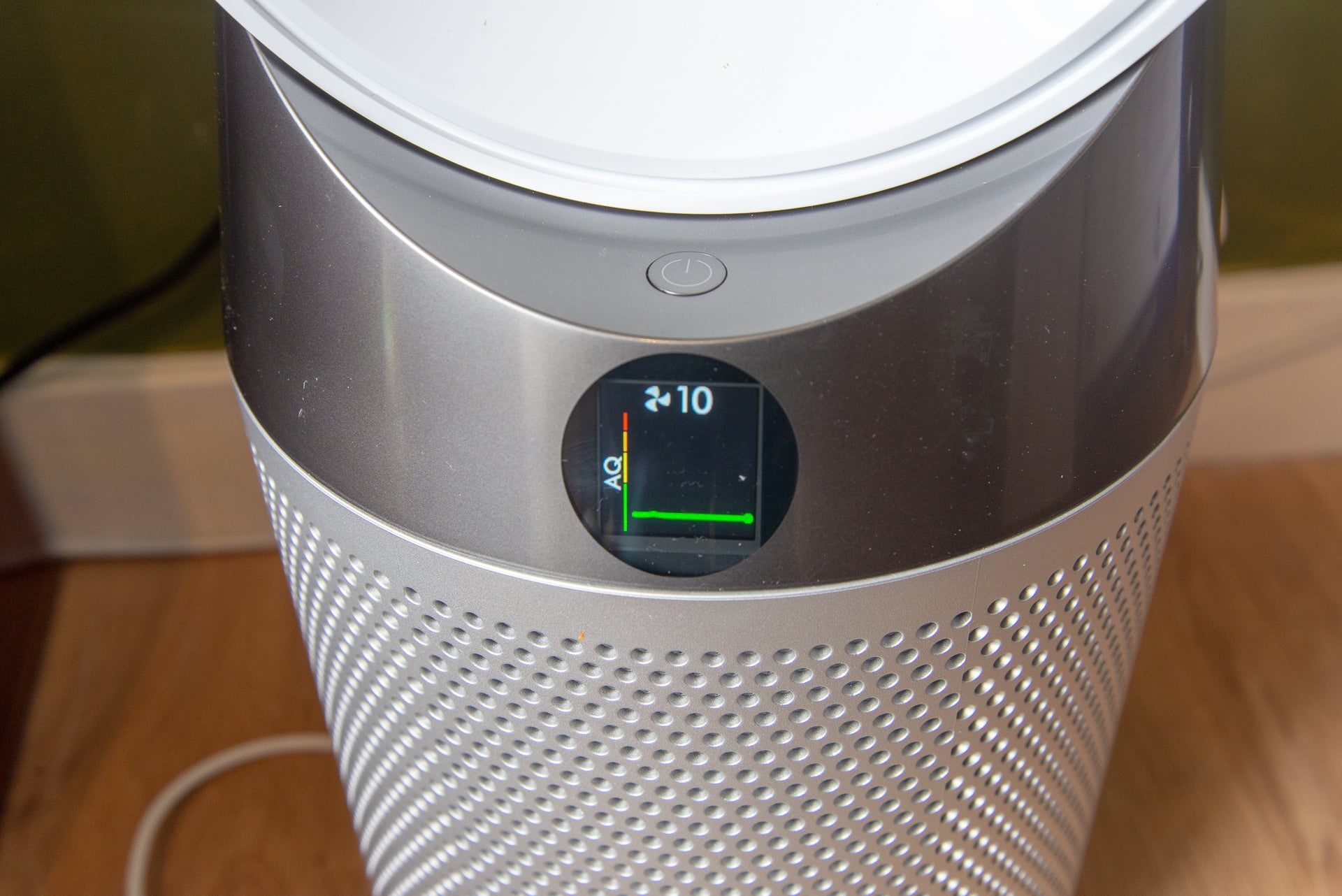 The Pure Cool Tower can also monitor temperature and humidity, so you can survey whether you have a comfortable environment. Note that VOC readings tend to increase in hotter temperatures.

Humidity is a useful measurement, too. In particular, a too-humid environment offers the perfect surround in which mould can develop; too dry an atmosphere and you can get sinus problems and dry skin.

There’s no CO2 measurement on the Dyson Pure Cool Tower, which can be a useful metric to determine when a room needs its air to be refreshed. Nevertheless, compared to the previous model, the Pure Cool Tower provides much more information (see new and old compared in the screenshot below). There are two main options for direct control: the Dyson Link app, or the remote that magnetically attaches to the top of the fan. You can adjust airflow through either control, although for the best purification you should leave it on Auto, with the Pure Cool Tower ramping fan speed up and down based on the quality of your air. The fan will pause when the air is clean.

Oscillation lets the fan rotate, cooling a wider area. As you tap the button, you can select the oscillation angle: 45, 90, 180 and 350 degrees.

Night mode dims the lights and changes Auto mode, so that the maximum fan speed is 4; you can manually ramp this up on hot nights, however. Use the app and you can even set the start point of the oscillation, which is perfect if you want to fine-tune where the cool stream will go. 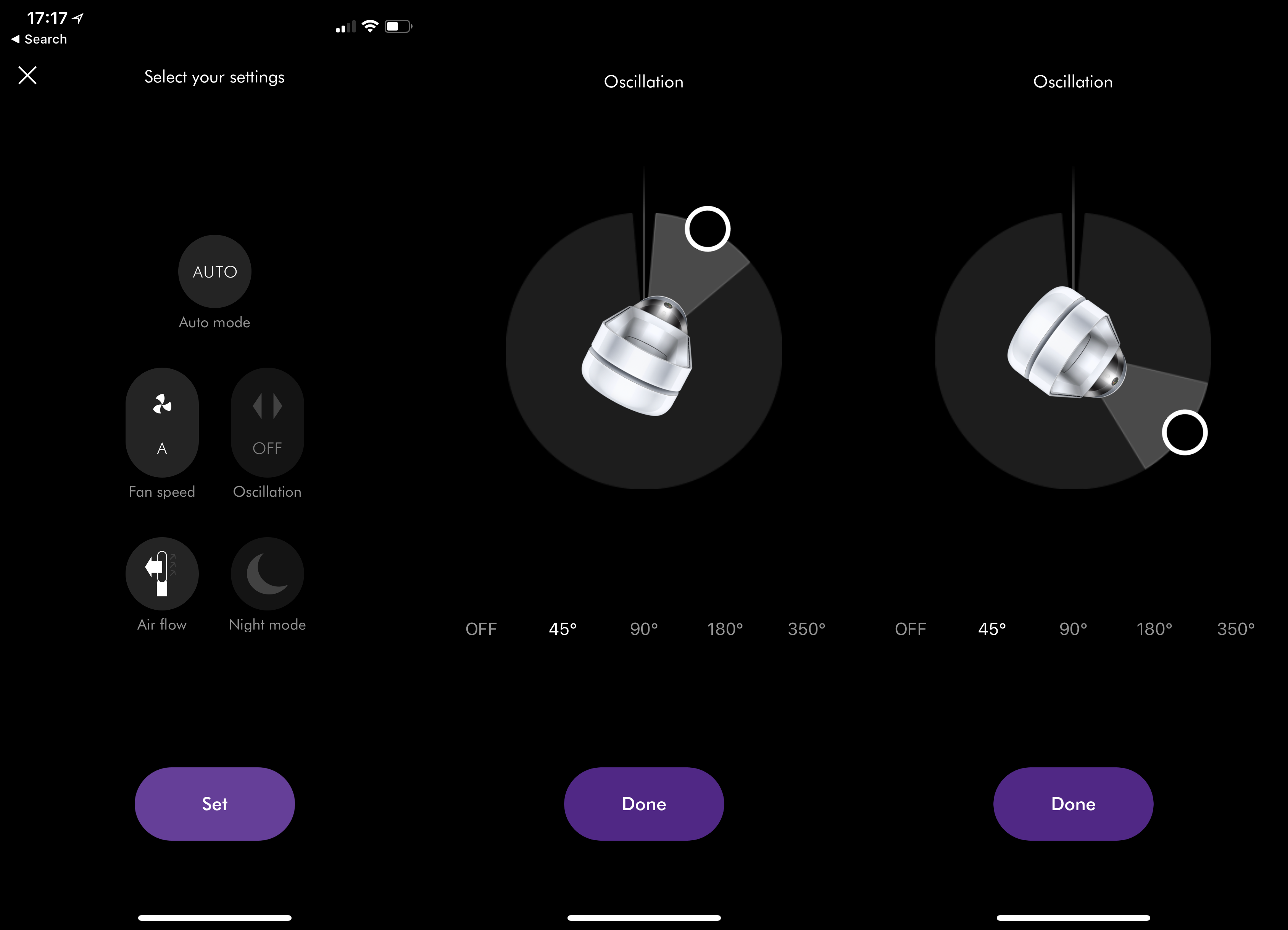 A timer allows you to choose when the fan will turn off automatically, starting at 15-minute increments to the hour, then hourly until the maximum of nine hours. It’s a handy feature if you want something to help you get to sleep, but then to shut down to avoid being disturbed.

Turn to the app and you also get a schedule, letting you choose what the fan should do at different times of the day, and different days of the week. 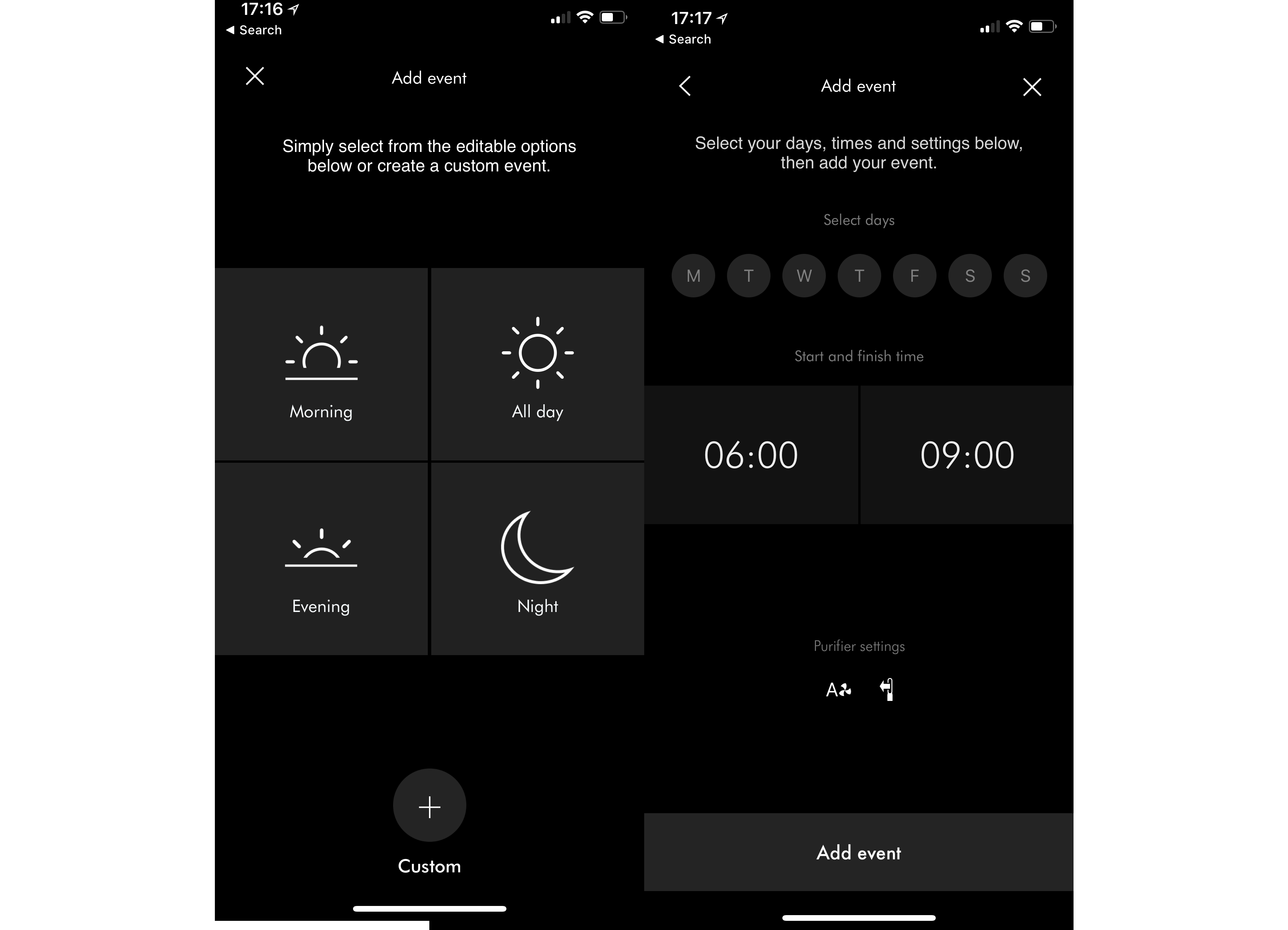 As well as app control, Dyson has an Alexa skill. Using your voice you can turn the purifier on or off, set fan speed, Night mode or Auto mode, and ask for the current air quality reading or temperature. Noticeably, two options are missing: enabling oscillation and changing the direction of airflow.

The skill works well and can be faster than reaching for the app or remote. However, it would be nice if the fan appeared as a smart home device. That way, you could – for example – automatically turn the Pure Cool Tower off with an Alexa routine. It would be nice to see Google Assistant support, too.

I’d also like to see IFTTT integration, particularly given the sensors in the Dyson Pure Cool Tower. For example, a drop in humidity could be used to turn on a humidifier via a smart plug.

Dyson fans are designed to be super-quiet, and the Pure Cool Tower is no exception. At minimum speed, you can just about hear the fan in a quiet room. In most places, background noise would drown out the fan entirely. I measured it at 40.2dB at a distance of 1 metre. On maximum speed, I measured the fan at 62.2dB from the same distance.

Airflow is impressive, although harder to measure on a Dyson fan, since the air blade gives a thinner, less-intrusive burst of air than that of a traditional fan. Even so, I measured air movement at 1.6m/sec at 1 metre, and 3.7m/sec at 15cm. At minimum speed, you get just a gentle stream. In all cases, the air from the Pure Cool Tower is more gentle and not as buffeting as from a traditional bladed fan.

Dyson doesn’t offer any CADR purification scores for the Pure Cool Tower, but does state that the purifier is capable of cleaning a family room, capturing 99.95% of ultra-fine particles, without leakage.

Spraying insect killer in my test room – a source of particulate matter – the Dyston Pure Cool Tower managed to return levels to normal in 1min 49secs, which is an impressive performance. 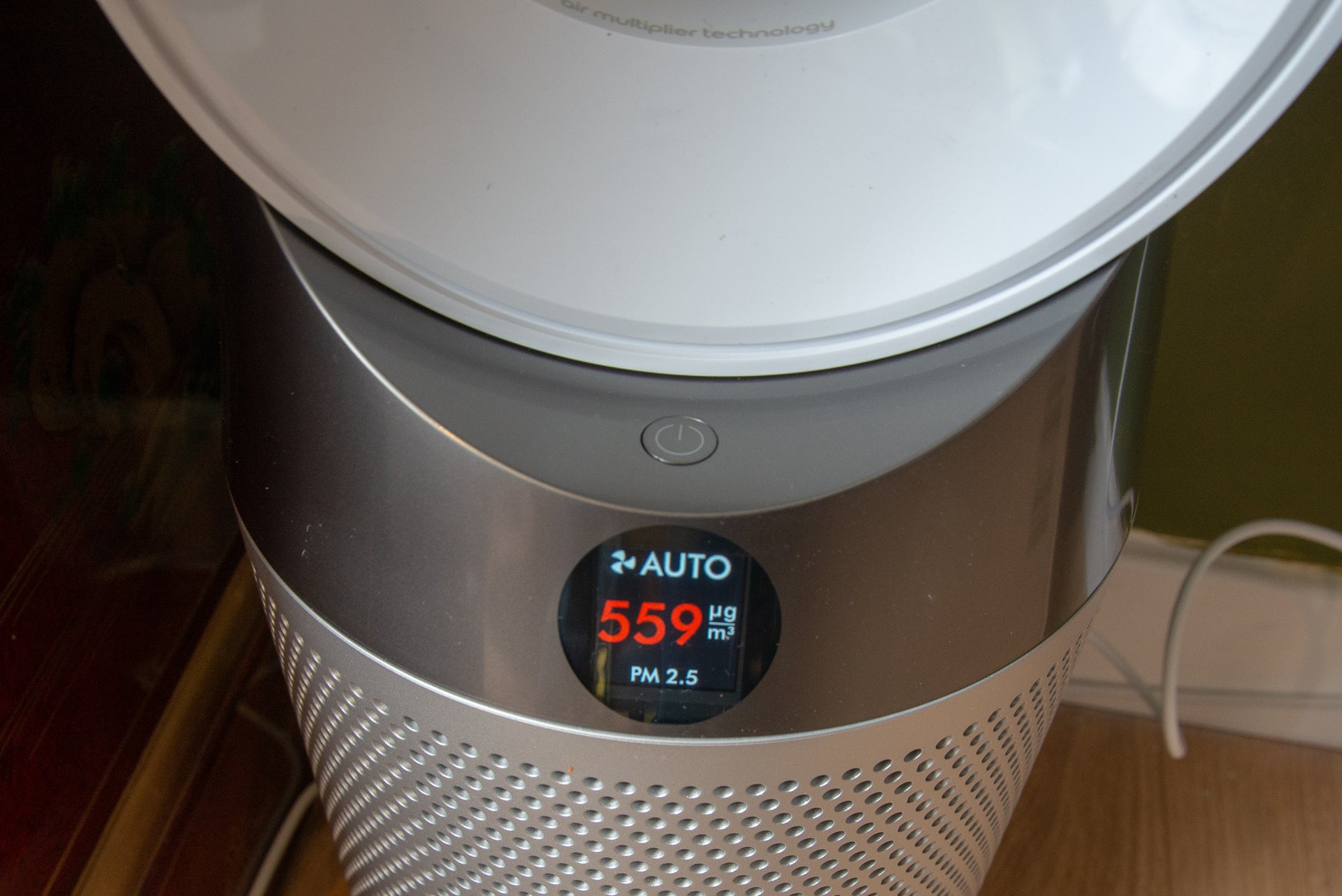 Leaving the fan on auto mode, it would fire up during the day at different points, as new pollutants were introduced into the office. Opening the door in the morning would typically increase the PM2.5 and PM10 counts, as the air circulated. But the VOC count also jumped up as builders working on the house spread a layer of latex on the floor.

Being able to see what spikes and when is an important diagnostic tool, and something missing from the older Pure Cool Link. For example, if you can correlate that a certain cleaning spray increases the VOC levels, you can plan to switch to a less-harmful cleaner. With this fan, you don’t need a separate air quality monitor, such as the Foobot.

Should I buy the Dyson Pure Cool Tower?

The original Dyson Pure Cool Link was a great bit of kit, combining an efficient and quiet fan with top-level purification. This model is a step up again, adding more diagnostic information, improving the filter replacement, and making the fan more comfortable to use on cooler days. The result is a model that costs more than the old one. Given the additional sensors, it’s money well spent.

While there are other air purifiers on the market, the Dyson Pure Cool Tower’s dual-function (also operating as a quality fan) makes it more versatile and a great choice for anyone who wants to keep cool while maintaining their indoor air quality.

With big improvements over the original model, this is the most flexible air purifier you can buy.