What is the Evapolar Personal Air Cooler?

Fans don’t change the air temperature, instead making you feel cooler by aiding the evaporation of sweat from your body. But to really get cool, you need a device that can lower the air temperature, such as the Evapolar Personal Air Cooler. Designed for personal use, this neat box is an evaporative cooler that uses a tank of water to cool the air it blows at you.

Most evaporative coolers are rather large devices that look more like portable air-conditioning units. The Evapolar Personal Air Cooler is a small cooler, measuring just 174 x 170 x 170mm, which makes it ideal for placing on a desk. It’s rather gorgeous, too, and is available in three colours. I’m reviewing the neat glossy white model, but there are black and blue options as well.

As this is an evaporative cooler, it has a 750ml water tank that sits on the side. It’s a little fiddly to remove, and the flap on top is a bit flimsy, but after a couple of refills I got the hang of getting the tank in and out smoothly. 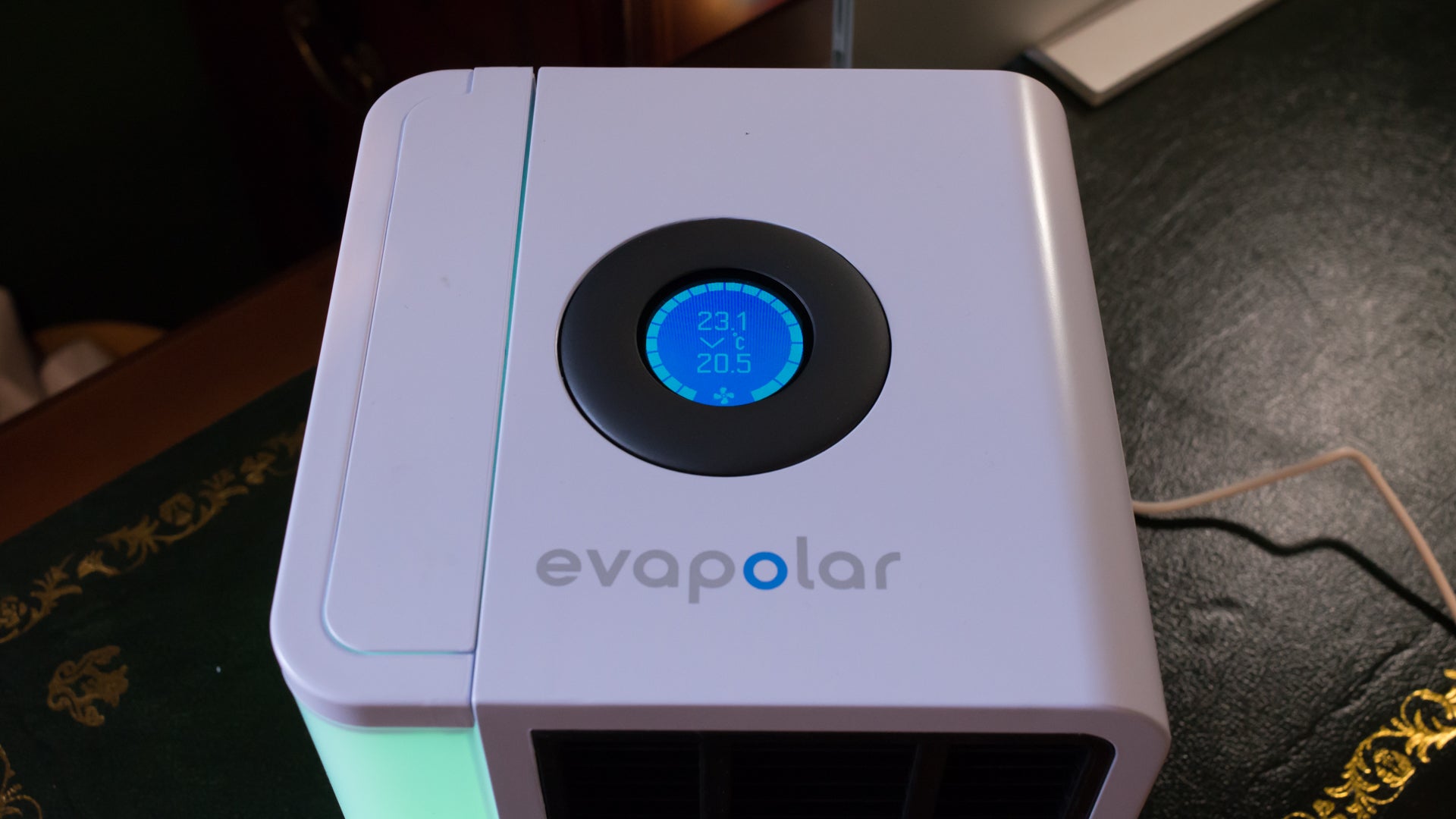 Water from this tank is absorbed into the cartridge inside, spreading evenly over the surface of the cooling pads. As the fan at the rear blows warm air over the water, it evaporates, cooling the air and adding humidity to it. Cartridges last approximately six months before they need to be changed (€39.99 a go). The water tank will provide three to four hours of cooling, and the cartridge can absorb around 400ml of water; refilling when the cartridge is saturated extends the cooling time by between one to three hours.

Controlling the Evapolar Personal Air Cooler is easy thanks to the bright screen on top, which doubles as a button. Press and hold this screen in and the cooler turns on or off. Use the dial around the outside, and you can adjust the fan speed. With 20 speed settings, there’s plenty of scope for it to offer everything between a gentle breeze and a full blast of air. 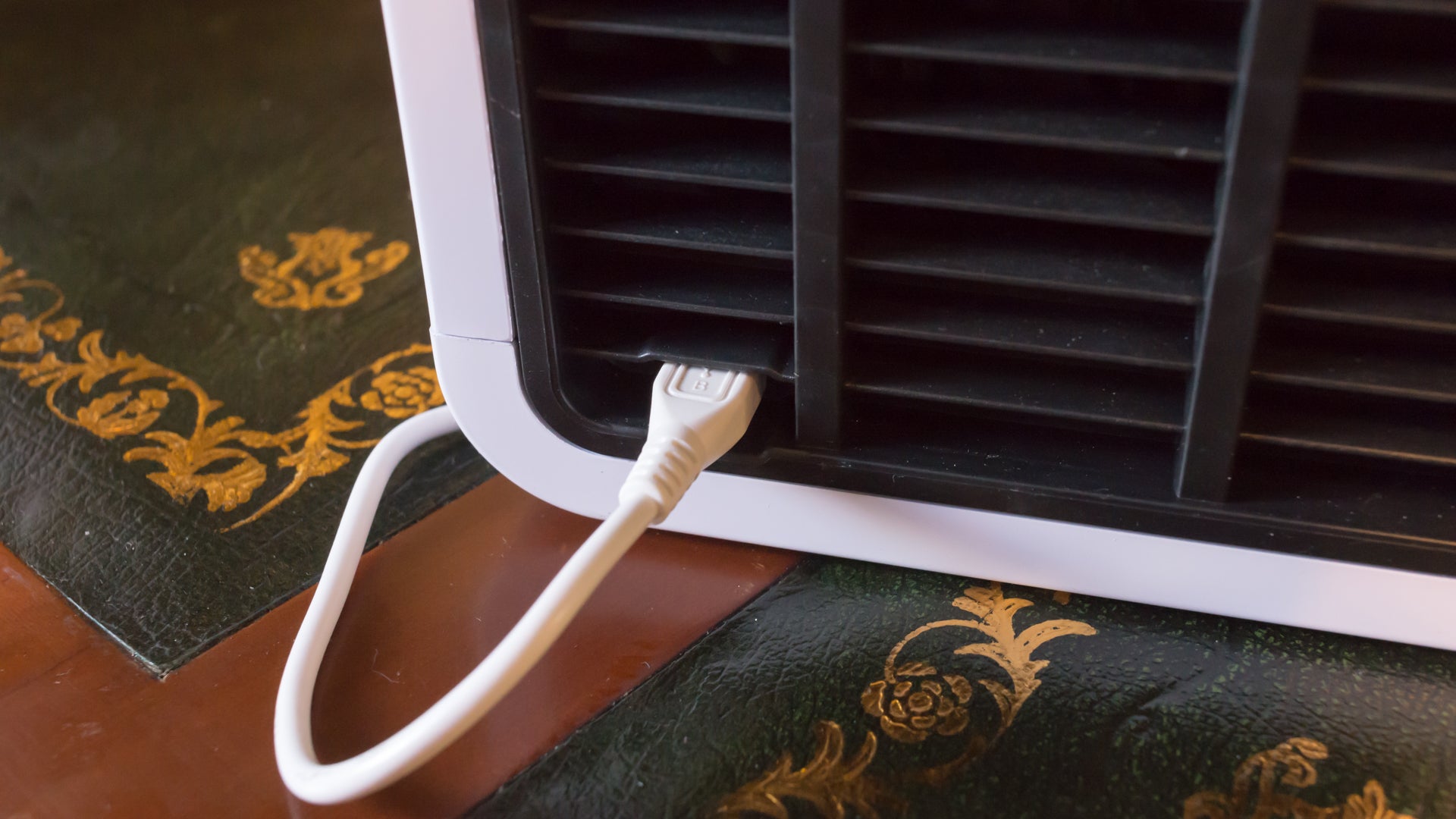 Tap the button once and you’ll access the main menu. This lets you adjust the colour of the water reservoir’s light – you can pretty-much match your decor – and the light intensity; or you can turn the light off. With Night mode, the reservoir light turns off, and the main display dims, so it isn’t distracting. There’s an option to shine a specific colour when the cartridge runs dry, too, so you know it’s time to refill the water.

It’s a shame that there’s no onboard warning to notify when it’s time to replace the cartridge; the only way to tell is when cooling performance drops, with the Personal Air Cooler becoming less effective.

Once the cartridge has fully absorbed the water from the tank, the Personal Air Cooler can operate at maximum efficiency. The cooling effect depends on a lot of factors, including ambient temperature and relative humidity. Evaporative coolers work best in hot and dry environments.

Testing in a room with an ambient temperature of 22.8C and 53.2% relative humidity with an external probe, I first left the cooler for 20 minutes, to give the cartridge time to absorb enough water. Once the cartridge was saturated, I measured the output from the Personal Air Cooler at 16.3oC.

The Personal Air Cooler reported that the input was 22.3oC and the output had been cooled to 16oC. In other words, the sensors are pretty much spot on. You can see the cooler in action with the thermal imaging camera below: the purple part of the image is the cold air. 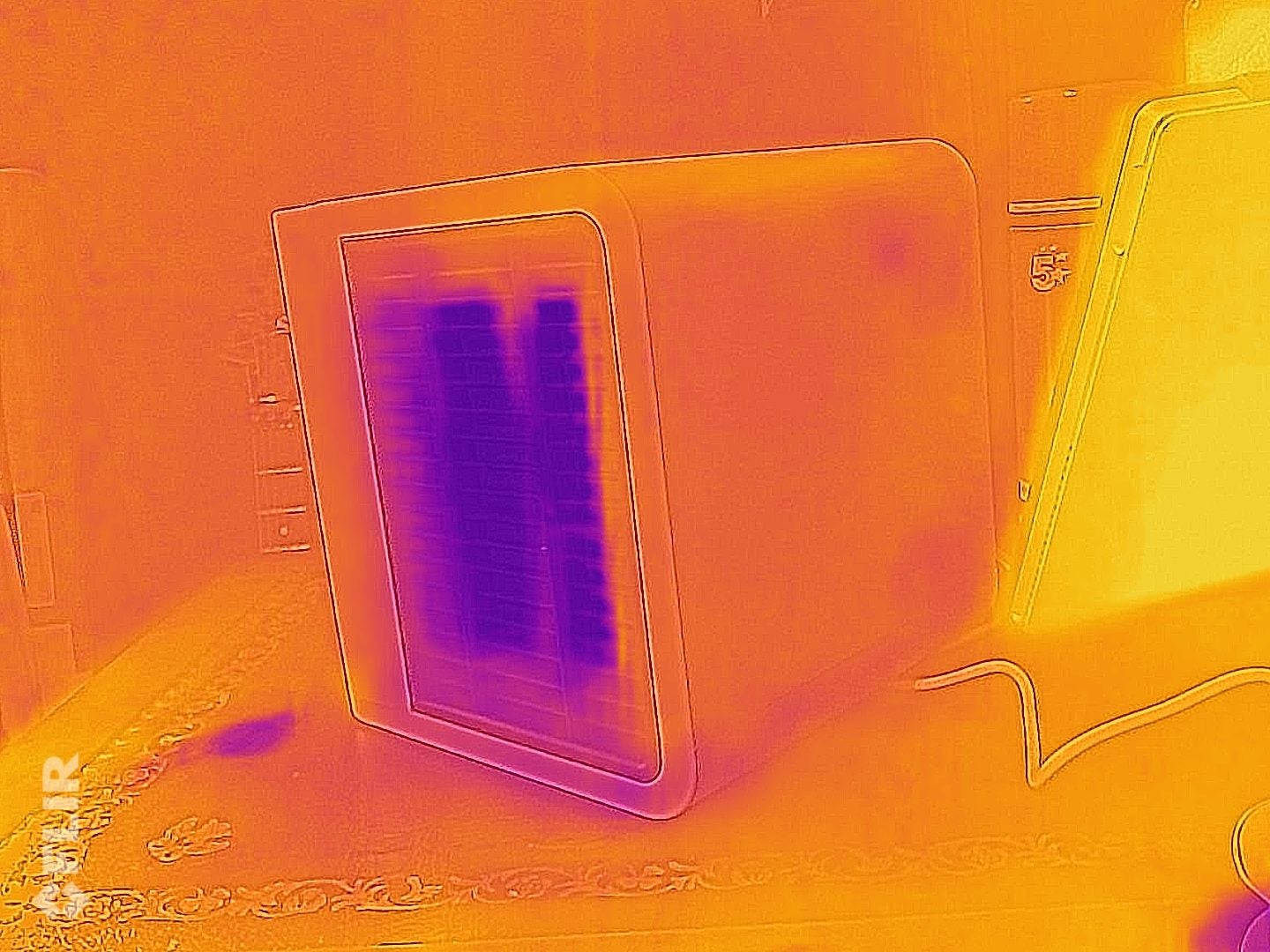 I measured the maximum air speed at 15cm at 2.1m/sec, dropping to 0.8m/sec at 1m (the recommended maximum placement distance). At minimum speed, my anemometer wasn’t sensitive enough to detect the gentle air flow. Compared to a traditional fan, the Personal Air Cooler doesn’t shift as much air – but it doesn’t have to. I found myself gently surrounded by a stream of cool air that cooled me far better than a fan.

It’s a fairly narrow cooling effect, and stepping too far away from the Personal Air Cooler means that you stop feeling the benefit. But, as the literature states, this product is designed to create a microclimate, not cool a room. That’s alright with me, as the Evapolar Personal Air Cooler managed to make working at my desk much more comfortable. Likewise, it’s useful for sleeping, keeping your body cool on a hot night.

Noise isn’t too bad, either; I measured it at 53.9dB at 1m at max power. At minimum power, the noise levels were 33.4dB, which is just the background noise of the room.

Power consumption is excellent. According to my plug-in power meter, the Evapolar Personal Air Cooler was drawing just 2W at minimum fan speed and only 6.2W at maximum power. That’s a lot less power than an air conditioner would draw, and no more than a similar-sized fan. Power consumption is so low that the Personal Air Cooler is powered by a standard micro-USB cable. 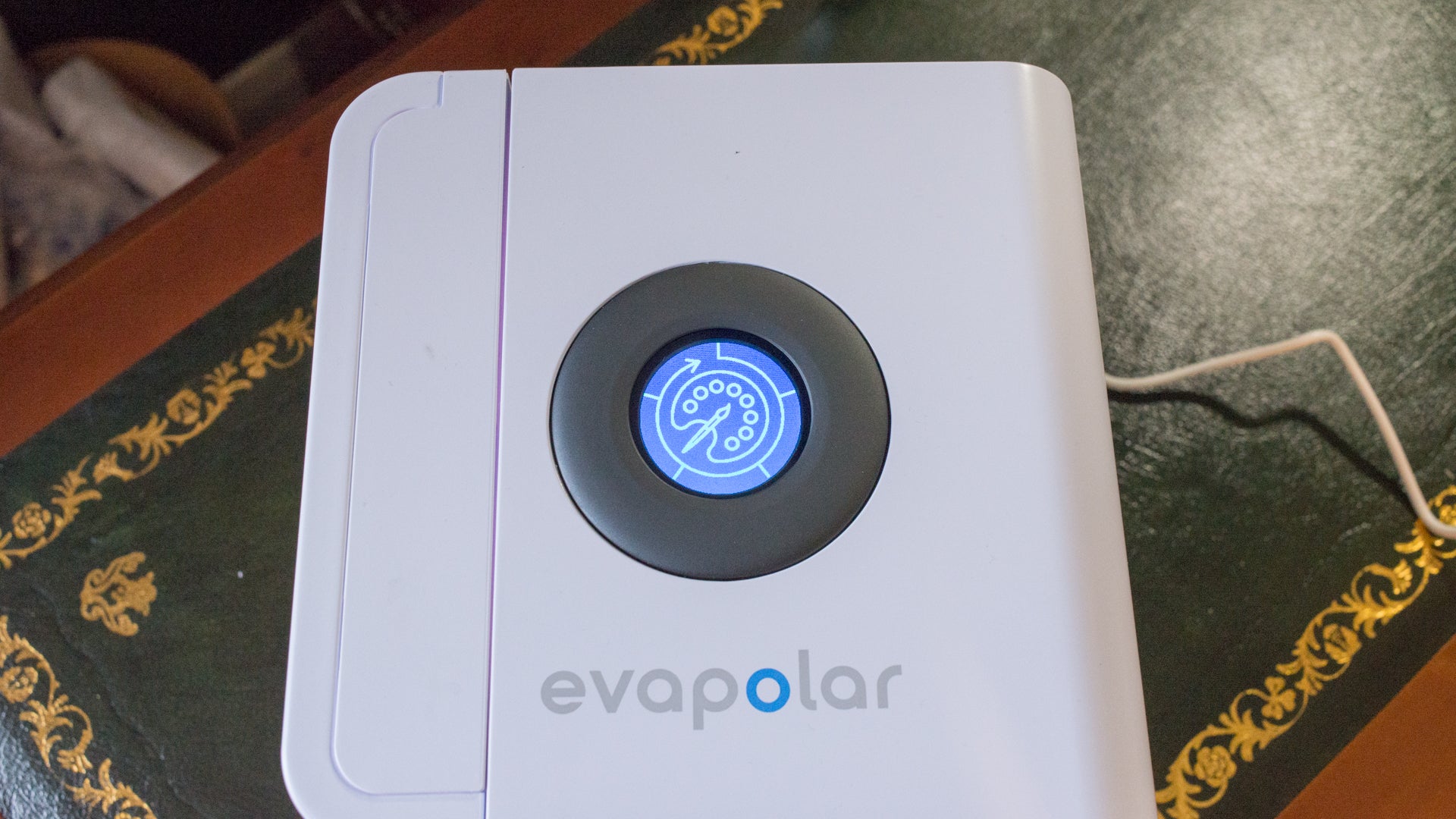 Should I buy the Evapolar Personal Air Cooler?

First, it’s important to understand that this isn’t a device designed to cool an entire room. Rather, it’s a device aimed at keeping one person cool.

Testing performance on a relatively hot summer’s day in the UK, with typical humidity levels for my home, I found that the Evapolar Personal Air Cooler managed to output a stream of air that was considerably colder than the ambient temperature. It made working at my desk more comfortable and, thanks to the way it works, meant that I could still have windows open for fresh air.

Best of all, running costs are extremely low. Air-conditioning units will cool down an entire room and work better in high humidity environments, but they require ventilation and are more expensive to buy and run. Fans can cover a wider area, but don’t have an effect on air temperature.

For personal use, such as those of us desk-bound or for sleeping, the Evapolar Personal Air Cooler is a great way to beat the heat.

Neat, compact, cheap to run, with simple, easy-to-use controls, the Evapolar Personal Air Cooler is a neat way to keep cool at your desk or while sleeping.