The PlayStation 5 is almost here, and the DualSense controller is what truly sets it apart from the competition.

It’s a peripheral that feels like a meaningful step forward, that adds a whole new level of immersion to gaming sessions. Here’s how.

DualSense builds upon the fundamental design ethos of the DualShock 4, while expanding upon it with some unorthodox changes to the colour scheme and enhancements to its overall feature set. This means the touchpad, speaker and share functions have become more established elements of the blueprint, instead of existing as hesitant outsiders.

The combined package makes the DualSense feel like a key release that pushes the medium forward, and a huge differentiator for the console, compared the relatively familiar new Xbox controller. 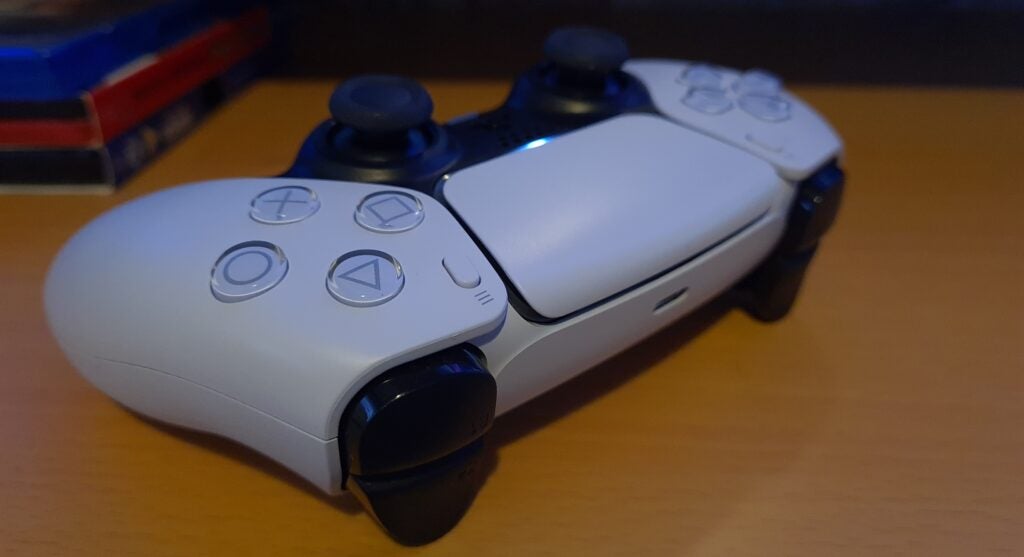 Design – An unexpected departure that remains drenched in familiar elements

Picking up the new controller, I was taken aback by its weight. The majority of console controllers developed by Sony have been on the slim side, a consequence of the plastic materials used to put them together. PS5 bucks this trend with a peripheral that feels impactful in your palms, proving before you’ve even pressed a button that it will be capable of incredible things.

Its colour scheme follows the same two-tone approach as the console, with the body consisting of two plastics with varying thickness. Black can be found towards the bottom, stretching across the thumbsticks, home and mute buttons. It’s softer to touch, giving way to the raised white which dominates most of the controller’s body.

The remaining plastic is much smoother, with the controller’s back supporting a texture which makes for a comfortable grip in the hands. Unfortunately such whiteness means the DualSense is easily susceptible to visible scuffs and marks which were previously disguised by the black paint job of old models.

I had to be careful when placing it on tables and other flat surfaces, knowing that letting it slide across virtually anything would result in some unsightly scars. This feels like a weird mistake for Sony to make, and will likely make the inevitable controller variants and limited editions a worthwhile investment. 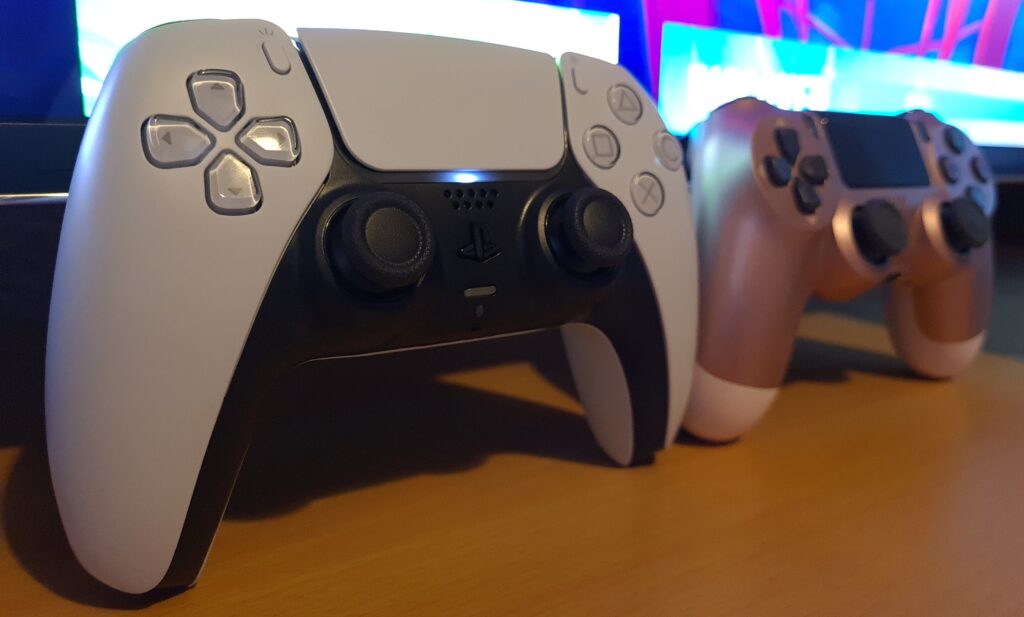 The DualSense features a headphone jack alongside a USB-C port for charging the controller, which is far faster than previous methods used by the DualShock 4. In terms of buttons and inputs, things remain largely unchanged, although the iconography of the share and option buttons have been changed to a selection of lines, but it’s still simple enough to tell them apart thanks to how they’re positioned.

I will admit it is downright bizarre to see the square, circle, triangle and cross buttons now adorned in grey instead of the quartet of colours that have defined them for over 25 years. Once I managed to escape my own nostalgic misgivings, I was quickly smitten with the new aesthetic. The buttons are raised high above the plastic body, meaning each push feels satisfying and responsive, though they still use membrane switches.

Travelling between them is also excellent, which should make the DualSense ideal for precise platformers and fighting games. The thumbsticks are also textured with a much higher quality of rubber. The outer rings sporting a texture which prevents your fingers from slipping throughout more hectic gaming sessions. It feels like it will wear away far slower than previous controllers, which was a regular issue for consumers with the DualShock 4.

DualSense really comes into its own once you experiment with the triggers. Sporting the same concave design as its predecessor, they are hiding some revolutionary technology that transforms how you approach contextual actions in a variety of different games. Sony has implemented haptic feedback into rumble alongside adaptive triggers which can realistically reflect the performance of actions in reality. 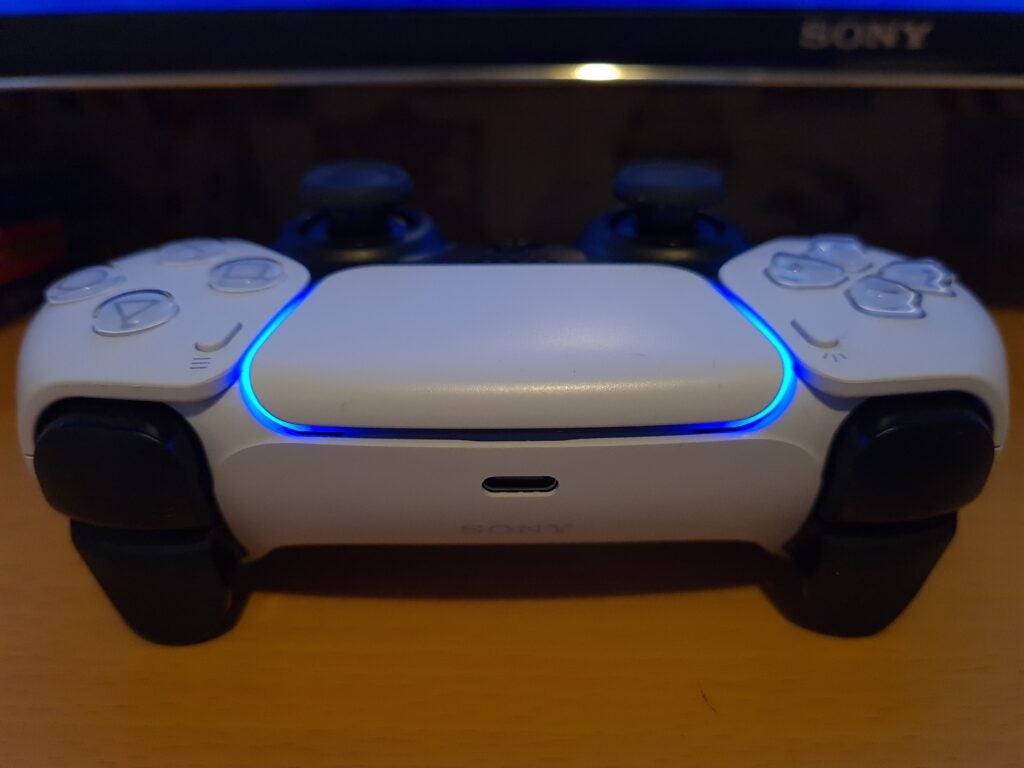 In Astro’s Playroom, you will need to hold down the trigger to activate a spring, or pull an object and feel the pressure mount up in your fingers before an explosion of relief hits you. Controlling a robot monkey, you must tilt the controller while holding the triggers to cling onto precarious cliffs, with the feeling in the adaptive triggers changing as you move closer and closer to your goal. Rockets of a miniature ship will blast against your digits as they’re ignited, or a toy minigun’s constant rotation can deliver a similar level of impact.

A similar sense of magic can be felt in the DualSense’s vastly improved vibration motors, which can be engineered to once again mimic the actions on screen right into the palm of your hands. Gusts of wind pushing back against Astro Bot are reflected in the controller’s vibrations, as are individual drops of rain as they gently hit against your cutesy umbrella. It’s nothing like I’ve ever felt in gaming before, and there’s so many possibilities to be explored.

Astro’s Playroom is undoubtedly the most complete showcase of the DualSense’s potential, but it’s also briefly explored in Marvel’s Spider-Man: Miles Morales and Devil May Cry 5: Special Edition. While swinging through Manhattan as the web-head, you only need to apply a light touch to the triggers to unleash a strand of web, or press down harder to enhance the momentum being placed into each individual movement. Nero’s sword in Devil May Cry can be revved up like a motorcycle, emulating the feeling of a miniature engine at your fingertips. It’s rad as heck. 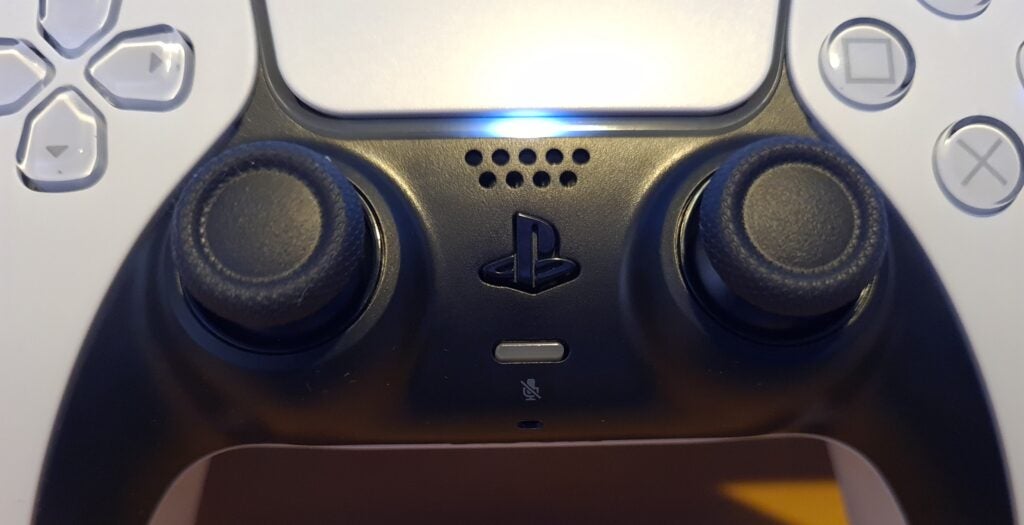 DualSense also has a microphone which can be activated with the touch of a button if you don’t fancy Sony hearing everything you have to say. It seems to be limited at a system level right now, but should come in handy when partaking in online multiplayer or using the voice search function on certain applications. It’s used in Astro’s Playroom as a nifty platforming mechanic, where you are asked to blow into the microphone to mimic the blowing of wind. This is used a handful of times to excellent effect as you avoid obstacles and activate an assortment of wild contraptions.

Battery life for the DualSense is a profound improvement, with my testing resulting in a total time of 13 hours and 11 minutes before it switched off and required a charge. Your own personal mileage will likely vary depending on the games and applications being used, but it’s hard to deny how much better this is when compared to the DualShock 4.

Verdict – Should you buy the DualSense Controller?

Adaptive triggers and haptic feedback introduce a newfound level of immersion, and while I’ve only seen it in a few games, it has the potential to be something really special. One of the only downsides is the white colour scheme, which is simply begging to be adorned with all sorts of irritating marks.

Such a grievance is easy to forgive, and one that will likely be addressed in future models anyway. Beyond this the build quality, battery life and general selection of capabilities is far beyond any PlayStation controller before it, and a solid step forward for the medium in its own right.