If the new Xbox One controller is an exercise in refinement, the PlayStation 4’s new DualShock 4 controller is more a wholescale reinvention – certainly the biggest leap forward for Sony since the introduction of the original DualShock on PS One, and arguably the most interesting and innovative controller on any console since the Wii remote.

It’s a controller that’s been designed from the ground up to support everything Sony’s new console can do, with the more conventional analogue sticks and face buttons joined by a touchpad, Sixaxis tilt controls and built-in Move functionality through the glowing bar at the rear. As they used to say about PS3, it only does everything.

You might feel concerned that the extra width of the DualShock 4 might affect its comfort, but while the balance is a little top-heavy in comparison to the new Xbox One pad, the controller actually feels very good in the hand, the extra distance between your paws giving them a little added space to breathe. The new controller has softer curves than before and a more tactile matt finish, and it feels lightweight but solid and robust. 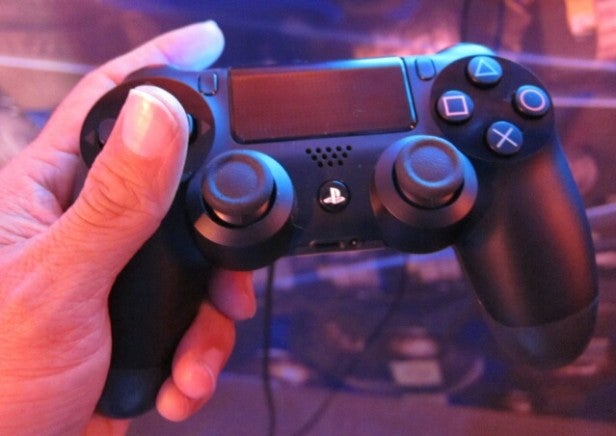 The most exciting aspect of the DualShock 4 for many of us will be the reworking of the analogue sticks. With their loose feel and large central dead-spot, the Dual Shock 3’s analogue sticks have never been quite as good as their Xbox 360 or Nintendo equivalents, leaving FPS fans in particular feeling that they’re not quite playing at their best.

From what we’ve played, the sticks on the DualShock 4 are a big improvement. They feel a little tighter, they’re more responsive near the centre and they seem more sensitive in general. The raised ring around the circumference also makes them easier to grip during long periods of gaming – the old DualShock 3 sticks felt a bit slippery after a while. 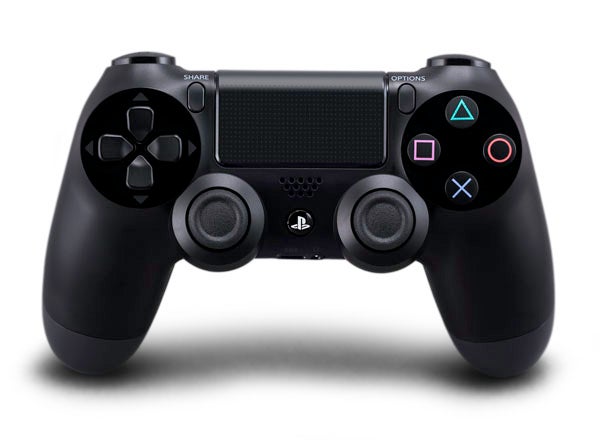 As with the DualShock 3, the analogue triggers are light and very springy, but they now curve slightly outwards, which feels odd at first but soon becomes very natural. As before, the triggers have a fair amount of travel and seem very responsive, so they should work well with those driving games where you don’t want the pedal on the metal every time. The L1 and L2 buttons also seem easier to grab in a hurry, but still work very smoothly.

The position of the face buttons hasn’t changed – it’s a focal part of the PlayStation brand – but they have lost their analogue capabilities. Bearing in mind how few developers used these that isn’t much of a loss, and the feel is light and precise. 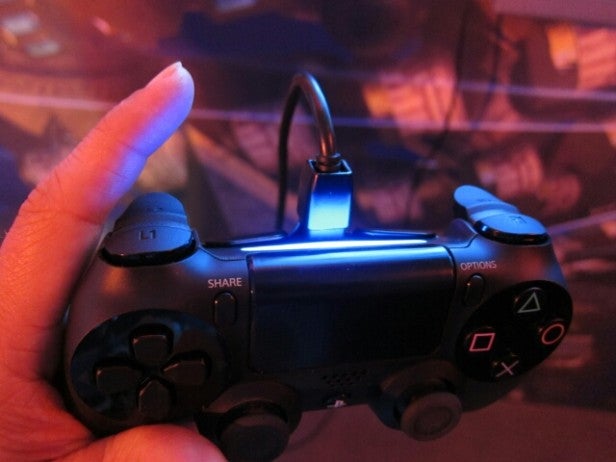 Probably the only controversial move on the new controller is the repositioning of the Start and Select buttons to make space for the central touchpad. They definitely don’t come as easily to the hand if you need to access them mid-game, and a lot of PS3 games have relied on them heavily for calling in maps or inventory screens.

We’re still getting to grips with the touchpad, not least because it’s only supported by a handful of games at E3, with some of them developer-led rather than hands-on demos. It does seem to be very sensitive – easily sensitive enough to handle the PS4 UI and in-game menus – and we’re seeing it deployed in Diablo III to control the inventory screens and in inFamous: Second Son to move and hold specific large objects through a kind of telekinesis. It’s also being used in Sony’s brilliant Playroom demo to flick objects and characters out into the augmented-reality room on the TV screen.

The Playroom demo also gives the new glowing bar a bit of a workout. The new PlayStation Eye camera offers a lot more resolution, better low light performance and more lifelike colours than the old, and it has no problem using the bar at the back of each controller to track the DualShock 4 in a 3D space. We’ve had water gushing out of the controller and robot minions rattling around within it, all controlled through the DualShock 4’s tilt sensors, and it’s clear that it all works very well.

You can also use the tilt sensors to steer in DriveClub, though if you haven’t got on with this control method in previous racing games, it’s unlikely that this experience will change your mind. 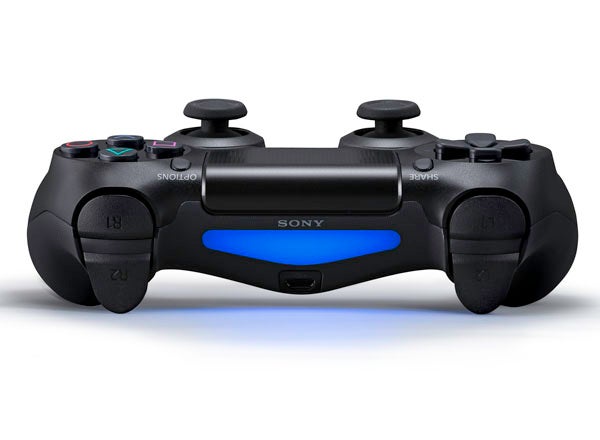 There’s always a challenge in adding new functionality to a controller, in that you can compromise comfort and the core controls for features that only a subset of games might use. With the DualShock 4, however, Sony has got things right. It’s going to be a revelation for PlayStation FPS fans, and we suspect that the touchpad will see a lot of action across a wide range of titles.

On balance, the Xbox One controller still has the edge on ergonomics, not to mention those brilliant new rumble features, but if Sony and its developers can find ways to use the touchpad and the built-in Move features to enhance their games, then this could still be the defining pad of the coming generation.

Next, see the definitive Xbox One vs PS4 comparison — now updated with new E3 2013 info