What is the DJI Mavic 2 Pro?

DJI’s original Mavic Pro was a game-changer when landed in September 2016. Then the smallest camera-equipped flying machine in DJI’s lineup, its foldable design has since been adopted by the Mavic Air, which is currently our favourite sub-£1,000 drone.

But now the Chinese company has introduced two new Mavic flagships; the Mavic 2 Pro and Mavic 2 Zoom. While the latter features 2x optical zoom, the Mavic 2 Pro is the first to be fronted by a Hasselblad camera.

It can shoot 4K at 30fps and 20-megapixel still images, yet is still small enough to fit in a bag and boasts a better battery life than its predecessor. This combination makes it one of the best drones you can buy.

Take a quick glance and you’d be hard-pressed to spot the differences between the original Mavic Pro and this new model. The models share a similar overall design: angular body with four fold-out rotor arms, camera slung up front and a battery pack at the back. 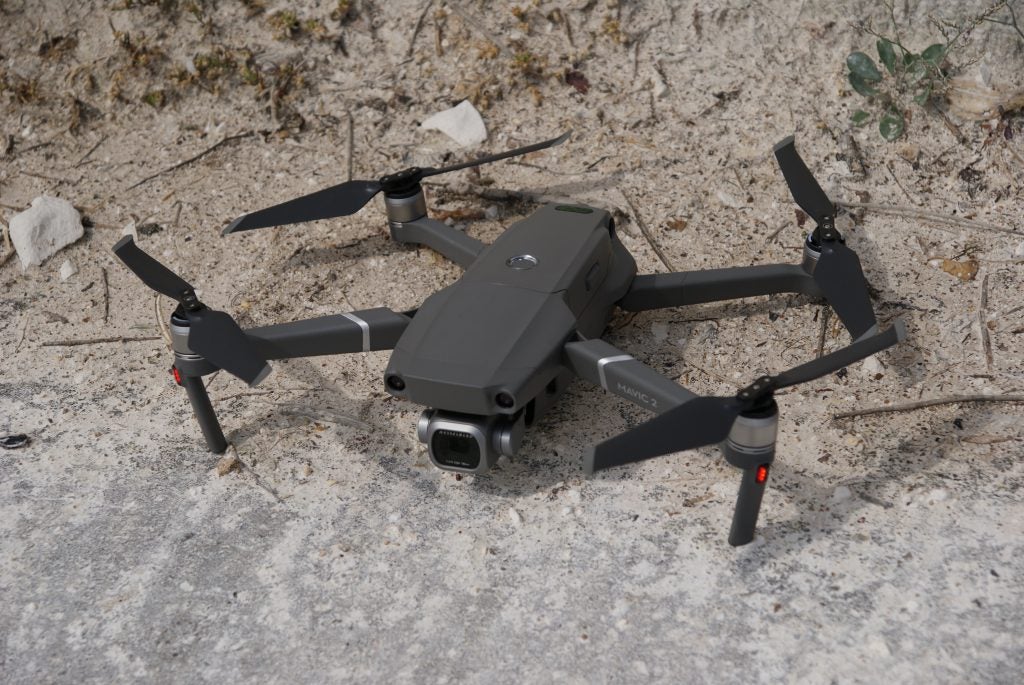 However, a closer look reveals several changes: the camera is quite a bit larger (we’ll go into the reasons for that below), there are more sensors for obstacle avoidance, and the overall design is a little sleeker.

On that last point, it’s still nowhere near as small and lightweight as DJI’s other folding drones, the Spark and Mavic Air. Being a pricier, performance-focussed premium model, it’s built for stability and battery life over portability – although DJI claims its streamlined shape makes it faster and quieter in flight than the original Mavic Pro. When fully folded, it weighs 297g and measures 91 x 84 x 214mm, which will just about fit into a bum bag or small handbag.

There’s 8GB of built-in storage, plus a microSD slot that can accommodate cards up to 128GB, and footage can be siphoned off to your computer via the USB-C port, which can also hook the drone up to your computer for firmware updates (these can be downloaded to your phone, too). 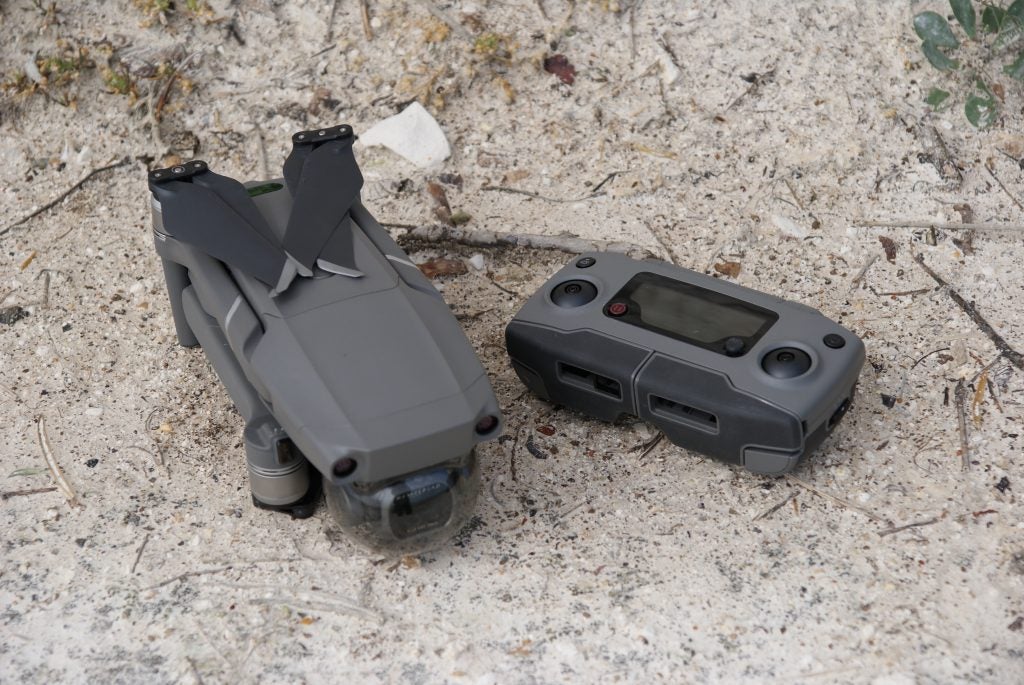 The controller folds down to around the size of a glasses case, and while it generally shares its design with the original Mavic Pro controller – including an LCD panel for at-a-glance flight info and adjustable arms that hold your phone in place during flight – it now features removable thumb sticks (plus slots to safely store them), which keeps its profile slimmer.

DJI includes cables for connecting phones via Lightning, USB-C and micro USB, so whatever your flavour of handset you should be covered.

As with most camera drones, you’ll need an Android or iOS device running a companion app to fly the Mavic 2 Pro. The DJI Go app gets a lot of criticism from users (particularly the Android version, which is what we used for this review), but in general we found it worked as it should.

It did cause frustration when trying to update the firmware for the drone and controller (basically, it refused to do so while simultaneously telling us it needed to do so), leading us to use a computer and USB connection to do it instead. If you don’t have access to a computer, we can see that being extremely annoying, and potentially ruining a drone-flying trip if you’ve not checked your drone is fully updated beforehand. 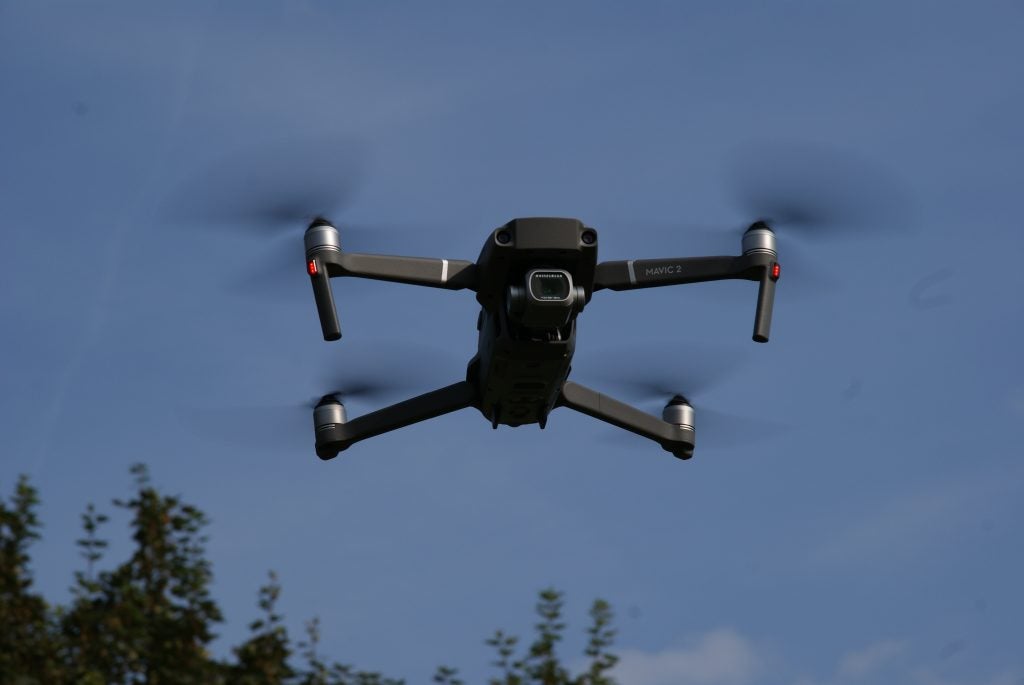 The app and DJI’s OcuSync 2.0 gives you a live hi-def feed from the Mavic 2 Pro’s camera, and during our testing we found it almost always remained crisp and stable, even when the drone was over 500m away.

DJI claims a theoretical control range of 8,000m, but it’s impossible to test that without breaking the law. We’ll say that, judging by its overall performance during our time with the Mavic 2 Pro, the transmission system feels more reliable than the original Mavic Pro, and vastly superior to those of rival drones like the Parrot Anafi.

If you’ve ever crashed a drone into a tree, wall, power line or similar obstacle, you’ll know the awful sinking feeling that hits your stomach as you helplessly watch your expensive piece of gear tumble to the ground. Thankfully, obstacle avoidance is getting better and better, and we’ve never seen it so good as on the Mavic 2 Pro.

With sensors on all sides, it’s nigh-on impossible to crash the Mavic 2 Pro – unless you’re in sport mode, of course, which turns them all off. In certain flight modes, it’ll even maintain a preset course while automatically manoeuvring around obstacles, but only when they’re in front or behind. 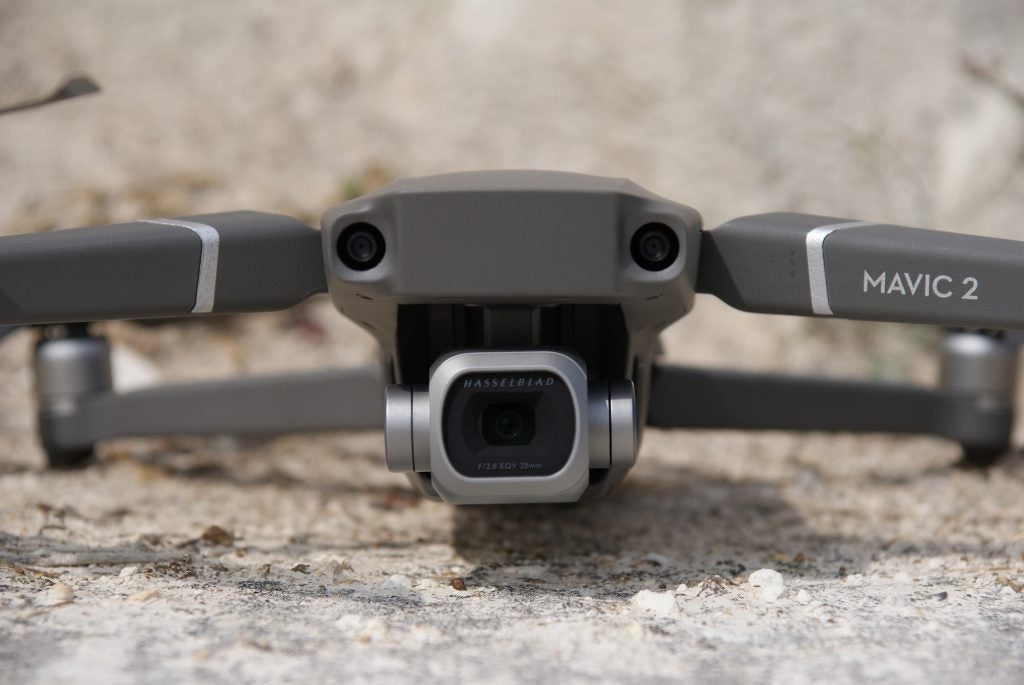 Another impressive stat? The 31 minutes of flight time per charge, which works together with the stable connection and sensors to give you a lot of peace of mind while flying.

It might not sound long, but that 31 minutes is longer than any of its rivals. The original Mavic Pro managed 27 minutes and the Mavic Air 18 minutes, while the Parrot Anafi runs around 25 minutes, and knowing you have that extra bit of air time means you can be more relaxed about flying.

In the air, the Mavic 2 Pro feels very fast and responsive, particularly compared to the Anafi. This agility – and this is in the “regular” P-mode, rather than the sportier S-mode – makes it a joy to fly, and also easier to get it where you want it to capture images.

It’s quieter than the original Mavic Pro as well, sounding a little less like a swarm of miffed bees. That makes it a little less obvious and distracting in flight, helping you grab your aerial shots without grabbing the attention of everyone within a couple of hundred metres.

Related: UK Drone Laws Explained: Where can and can’t I fly my drone?

For most people who are interested in the Mavic 2 Pro, the performance of its Hasselblad camera will be the factor that makes or breaks it – and I’m happy to confirm that it represents quite a leap over DJI’s other folding drones.

With a one-inch sensor size and adjustable aperture, the camera is able to perform more reliably in tricky lighting conditions. In lower light, the large sensor size helps it capture images with less grainy noise, while in extremely bright conditions the aperture will stop down to limit light intake and ensure images aren’t overexposed to the point where detail is lost.

The result is that footage generally looks fantastic straight out of the camera, as you can see above – although we’re certain that videographers and Photoshop wizards will be able to conjure up even better results using the Dlog-M and RAW DNG options with the post-production editing software of choice.

Both photos and videos reveal impressive colour depth and dynamic range, resulting in much more realistic, impactful images than we’re used to seeing from drone cameras. 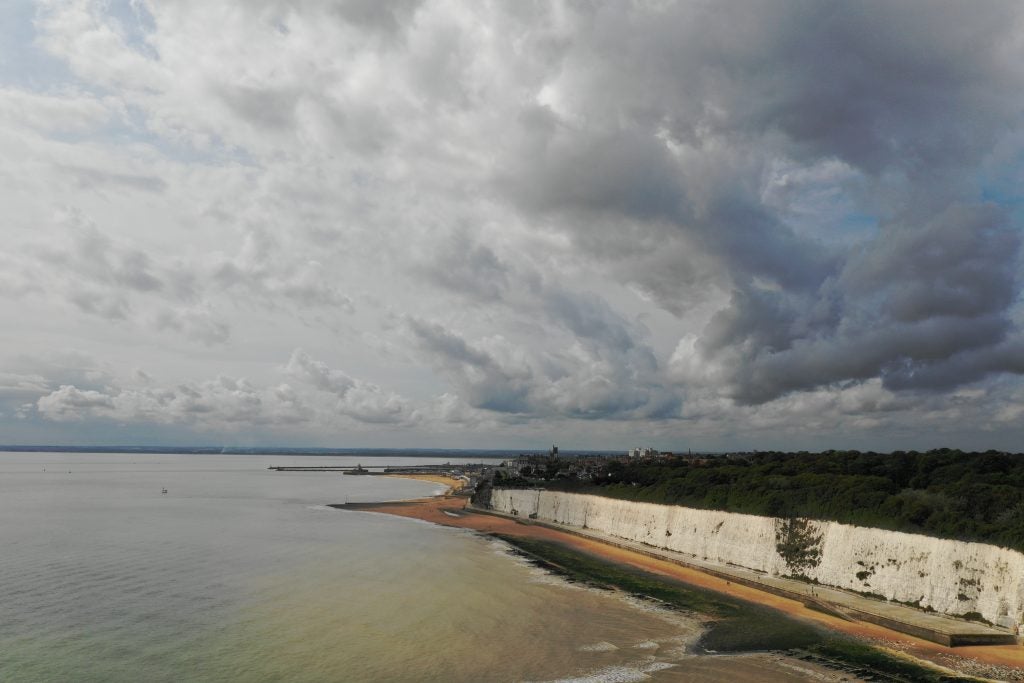 I couldn’t personally see much of a difference in quality between the encoding types, but H.265 is the newer, more efficient of the two, and probably worth using if you have a beefy enough computer to play it back smoothly.

As with previous drones, DJI’s flight tech works hand-in-hand with the camera to make life easier for flyers. The updated ActiveTrack tech, for instance, brilliantly follows subjects with the camera leaving you free to concentrate on piloting, while the new Hyperlapse flight mode produces impressive moving time-lapse videos by stitching together stills.

Why buy the DJI Mavic 2 Pro? 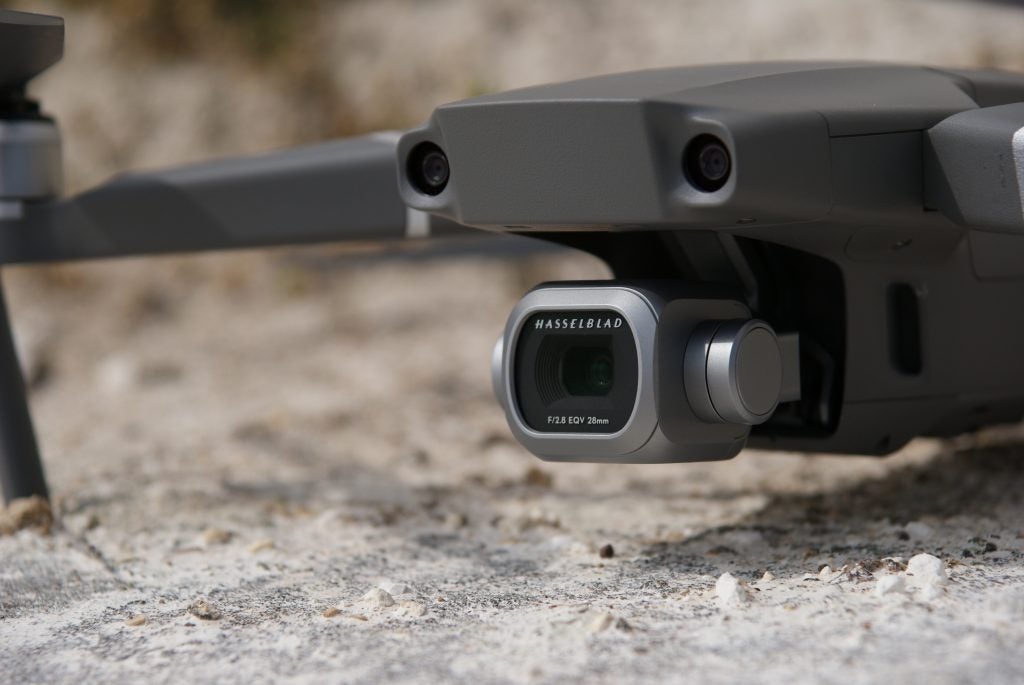 On their own, improvements like the long battery life, quiet operation, nimble flying, stable transmission and handy safety features make the Mavic 2 Pro a notable upgrade over the original.

But it’s the new Hasselblad camera and one-inch sensor, which offer the best quality stills and video footage we’ve seen from a drone in this sort of price range, that make it something of a stunner.

To get image quality this good out of a folding drone is no mean feat, and those looking for something a little punchier and more pro-friendly than the DJI Mavic Air should certainly consider spending the extra money.

The Mavic 2 Pro is as capable as it is fun to fly – if you can afford to pay the extra £530 over the Mavic Air, it’s well worth the premium.