What is the Parrot Anafi?

French company Parrot is Europe’s biggest drone manufacturer, but it’s fair to say that Far Eastern rivals like DJI have proven themselves to be in an entirely different league when it comes to the performance and quality of their flying machines. Parrot’s Anafi feels like its first genuine attempt at catching up.

It’s an affordably-priced but fairly advanced quadcopter with a lightweight, folding design that puts portability at the forefront, as well as a brand new camera that produces 21-megapixel stills and 4K videos with HDR.

The Anafi also includes several automated flight modes, such as the ability to follow the user, and a USB-C-chargeable battery that promises an impressive 25 minutes of flight time per charge. It’s supplied with a twin-stick controller and works alongside Parrot’s Freeflight 6 mobile app available for Android and iOS devices. 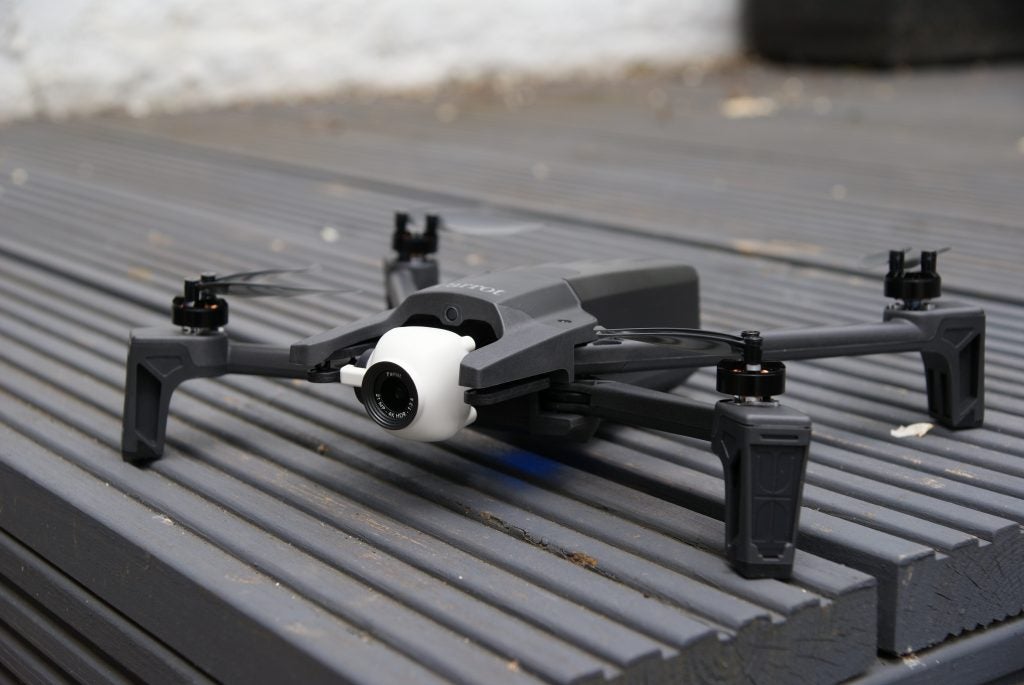 The Anafi is a brilliantly tiny package, even compared to the supremely compact DJI Mavic Air. At 320g, it’s over 100g lighter than its main rival. With its rotor arms folded in, this narrow rectangular block fits in a tough carry case, which in turn is small enough to slip into almost any bag – and even some larger jacket pockets.

The folding controller doesn’t fit in the case, though, so you’ll need to find a bit of extra bag space for that. Luckily, it feels much sturdier than the drone itself, so you won’t need to worry about bits falling off. Its fold-out antenna/smartphone holder can accommodate phones with screens up to 6 inches in size, and features USB-C and USB-A ports for charging and connecting to a phone respectively. 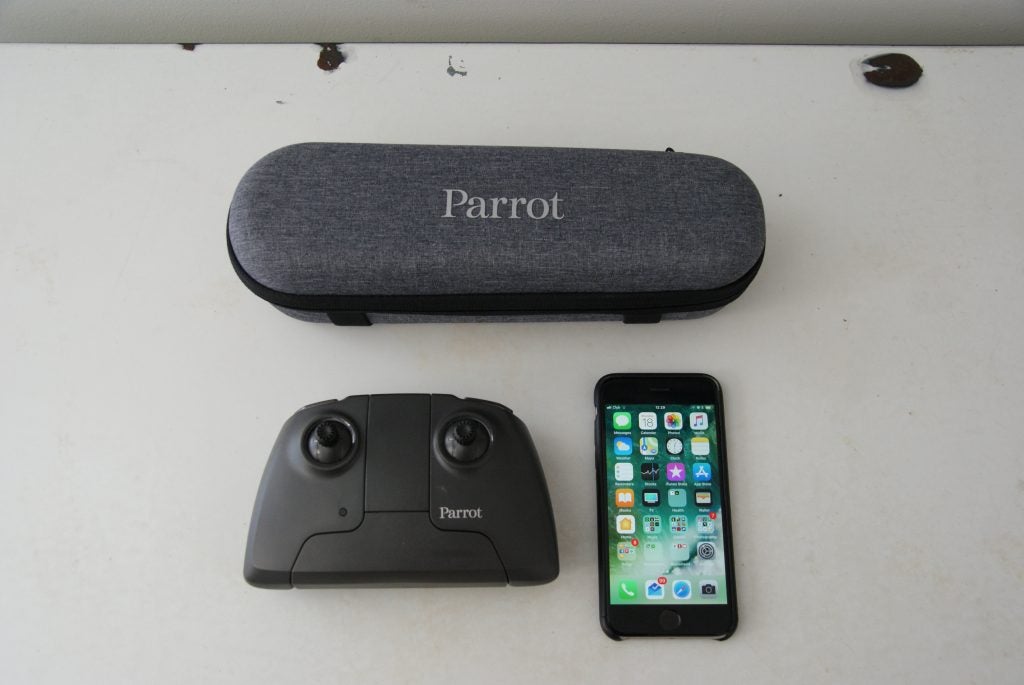 One LiPo flight battery is supplied in the box, although others can be bought for £89.99 apiece. Pop this off the drone and you’ll find a card slot. The Anafi doesn’t have built-in storage, so you’ll need a microSD to store footage and photos; Parrot supplies a 16GB card in the box. You also get a USB-A to USB-C cable and eight spare rotor blades, to replace any that get broken during over-enthusiastic flying sessions.

The camera is mounted at the nose of the drone on a 3-axis gimbal that allows for 180 degrees of vertical movement, which is something you don’t find on the Mavic Air. This lets you film directly above the drone, a skill that could nab some dramatic shots when flying through a tunnel or under a bridge. 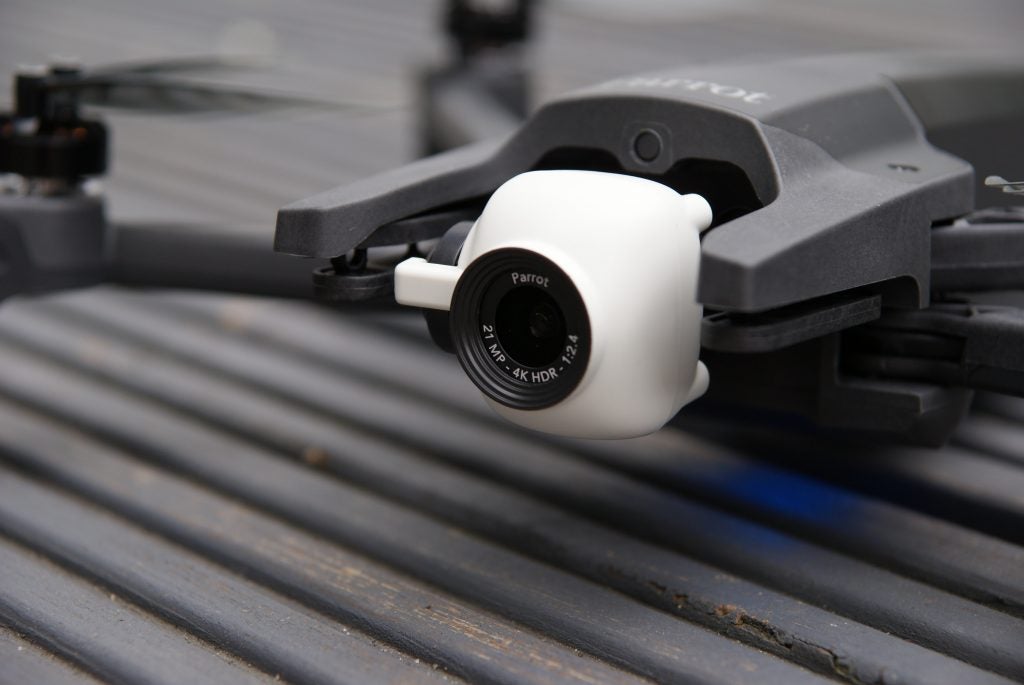 Unlike the DJI Mavic Air, the Anafi doesn’t come bristling with safety cameras for obstacle avoidance and indoor hovering stability. The only tech it appears to use for environmental awareness is GPS/GLONASS and some kind of altimeter. This means it’ll happily fly itself back to its take-off point (or your current position, which it can find using its connection with your smartphone) and land, but won’t stop itself from smacking into a tree or telegraph pole on the way.

With no downward-facing cameras to help it maintain a stable position without GPS, we wouldn’t recommend flying the Anafi indoors except for in the largest of spaces – it’s liable to drift around, requiring constant manual control. This is the one area where Parrot still lags a long way behind DJI. The Mavic Air has seven cameras and IR sensors for building 3D maps of its surroundings in order to fly more safely, so it’s worth considering if you’re a novice drone pilot. 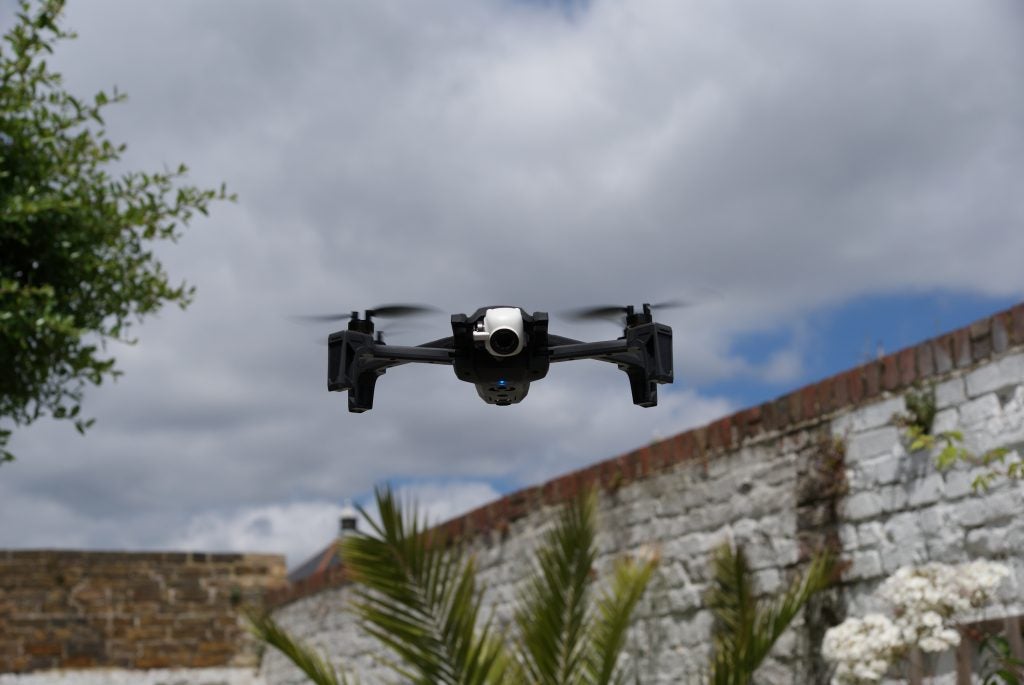 The Anafi is otherwise a joy to fly: responsive, agile and swift in the air (at least in its Sport mode) and can travel at speeds of up to 33mph. Its other flight mode is Film, which limits speed (you can tweak the limits yourself in the app settings menu) in order to keep movements smoother and steadier and more suitable for professional-looking, non nausea-inducing aerial videography.

Parrot claims a transmission range of up to 4000m between the controller and the Anafi. But we struggled to achieve more than about 600m before the 720p video stream became choppy or frozen and the app informed us that the Anafi was losing its signal and would be returning to its take-off spot automatically.

It’s a bit disappointing, although with the UK’s current drone laws prohibiting pilots from flying a drone out of their personal visual range, it’s something of a theoretical problem rather than an actual one – at least for law-abiding drone users. 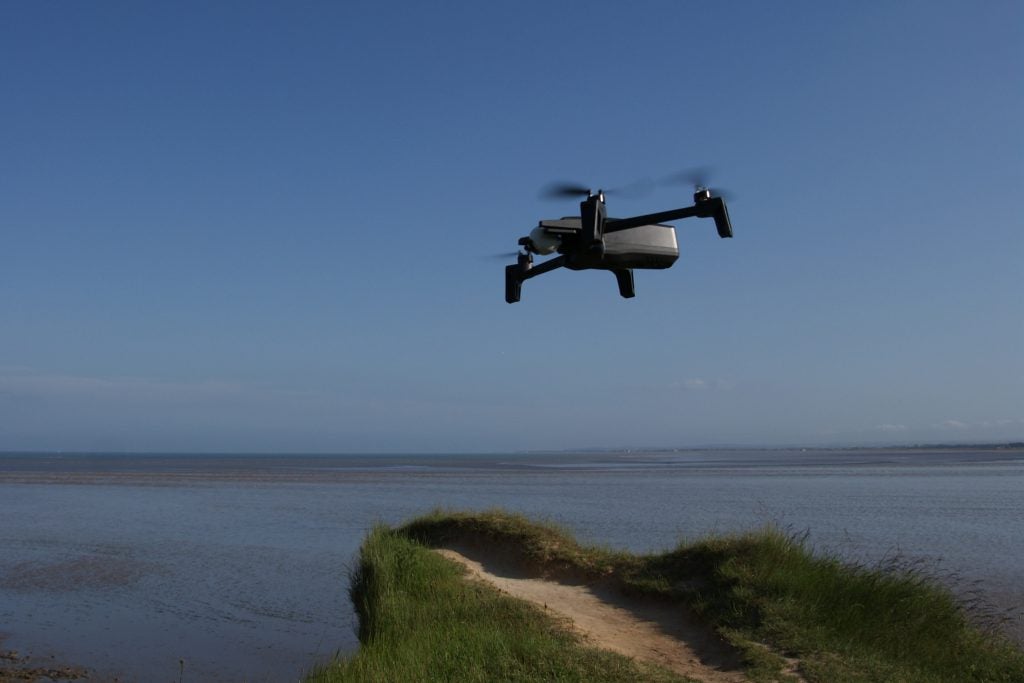 The Anafi’s battery life impresses, topping out at around 25 minutes of flight time per charge – that’s about four minutes more than the Mavic Air. When the battery is low, the app will repeatedly warn you, and eventually bring the drone back to its take-off point and land, should these warnings go unheeded.

This wouldn’t be a consumer drone without a gaggle of automated flight modes, and the camera’s ability to lock onto a subject comes into play in several of them. Cameraman, for instance, will keep the subject framed while you concentrate on steering, while Dolly Zoom will perform a Hitchcockian reverse zoom while the drone travels towards you. Personally, I felt a little uncomfortable giving up control of the Anafi without anti-obstacle features in play, but most of these modes seem to work as intended, even if they do seem gimmicky. 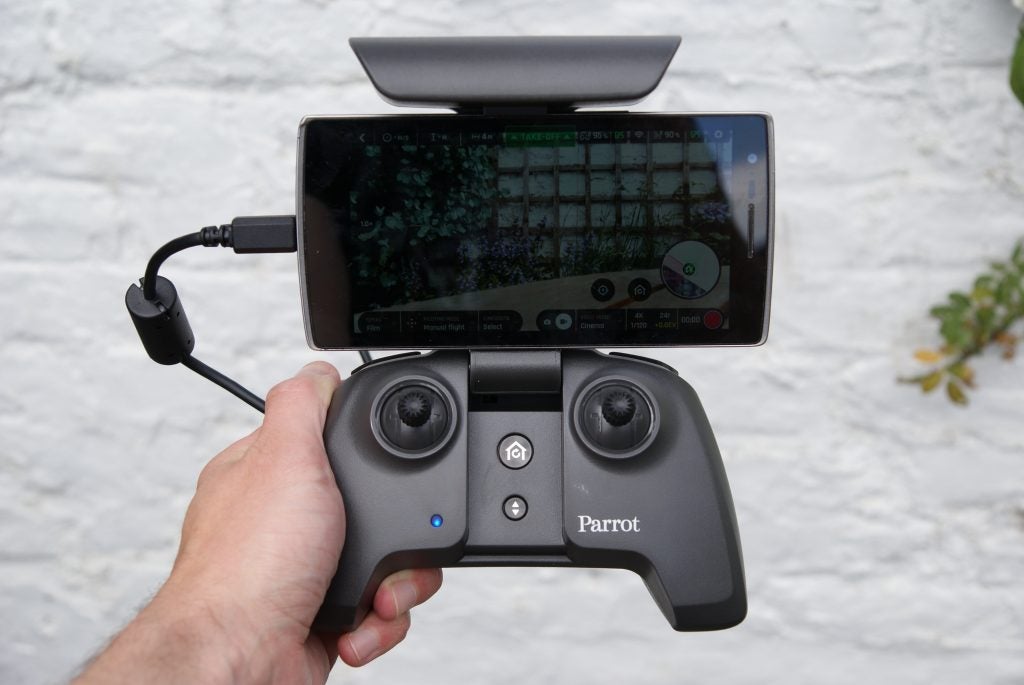 Parrot’s previous top quadcopter the Bebop 2 had a dreadfully disappointing camera compared to its rivals, but the Anafi surprised us by really delivering on the video and photo front. Its camera packs a Sony sensor able to record video at up to 4096 x 2180 resolution with HDR and photos at up to 21 megapixels, as well as an f/2.4 lens.

During our review we weren’t able to test out the camera’s HDR performance, due to using a pre-release version of the Freeflight 6 app that didn’t support the feature, but we can say that the 4K footage – which gives you a choice between 4096 x 2180 Cinema 4K at 24fps and 3840 x 2180 UHD at 24, 25 or 30fps – in itself is superb. Bursting with vivid detail and clean colour, it’s as good as anything you can get from a flying camera at this price point, particularly on a clear, sunny day. The 3-axis gimbal provides excellent stabilisation, keeping the camera level no matter how much you’re throwing the drone about.

Dropping the resolution to 1080p allows you to film at 120fps for slow motion playback, but we found that the reduction in quality didn’t make up for the super smooth frame-by-frame action. Your mileage may vary, particularly if you plan on filming fast-moving stuff with your drone.

Still JPEGs are sharp and detailed straight from the camera too – just take a look at our examples – but those who want maximum tweaking potential can also capture in Adobe DNG RAW. These huge files (around 40MB apiece) retain all the data collected by the sensor during exposure, giving Photoshop wizards more to play with.

Parrot makes much of the Anafi camera’s “lossless digital zoom”, which attempts to give the effect of an optical zoom lens up to 1.4x when filming in 4K and 2.8x in 1080p, but in testing we found it works much like any other digital zoom – in other words, image quality noticeably degrades when it’s used. We really wanted this to work, because decent zoom isn’t a feature you’ll find on affordable drones, but it doesn’t deliver on its promises. 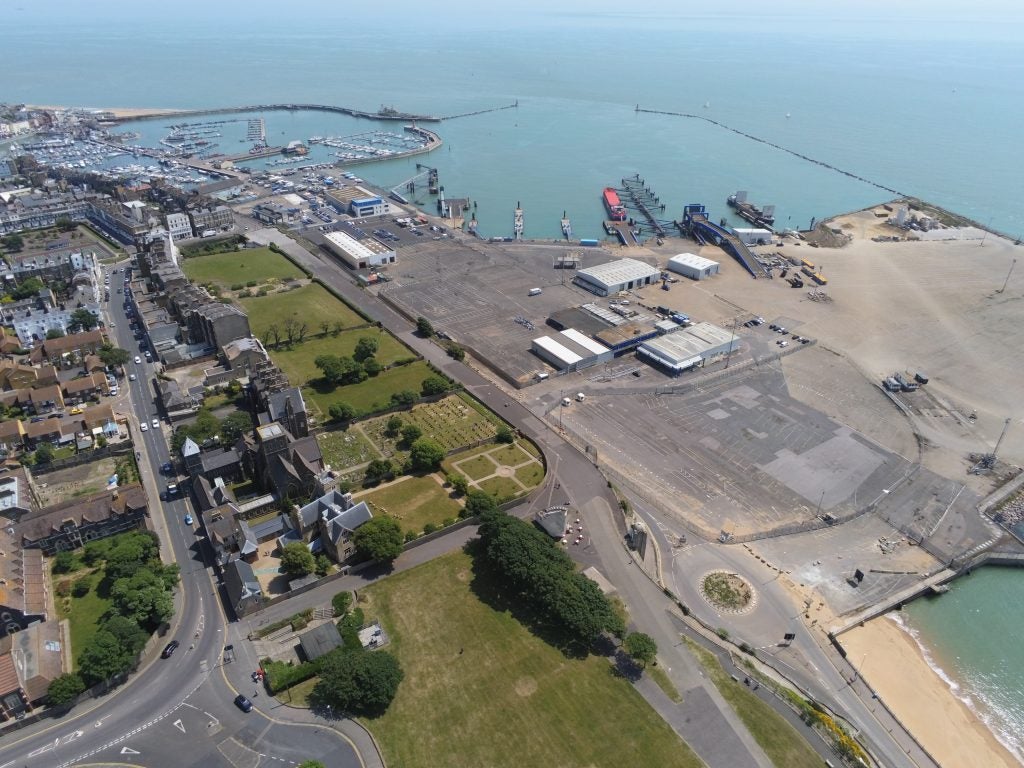 Why buy the Parrot Anafi?

While Parrot has clearly made great strides from the Bebop 2 with the Anafi, it’s going up against a very, very complete drone in the form of the £769 DJI Mavic Air.

Yes, the Mavic Air’s RRP is £140 more expensive than the Anafi, but it comes with longer, transmission range, gesture controls and a safer flying experience while offering a similarly portable design and high quality camera.

Aside from its camera’s ability to point upwards, a couple of auto-flying modes and HDR videos (the latter of which we haven’t been able to test), the Anafi doesn’t come up with anything that makes it “better” than the Mavic Air, so it really all comes down to whether or not you really need to save that little extra bit of cash. If you do, the Anafi won’t let you down, being comfortably the best little drone Parrot has ever made. 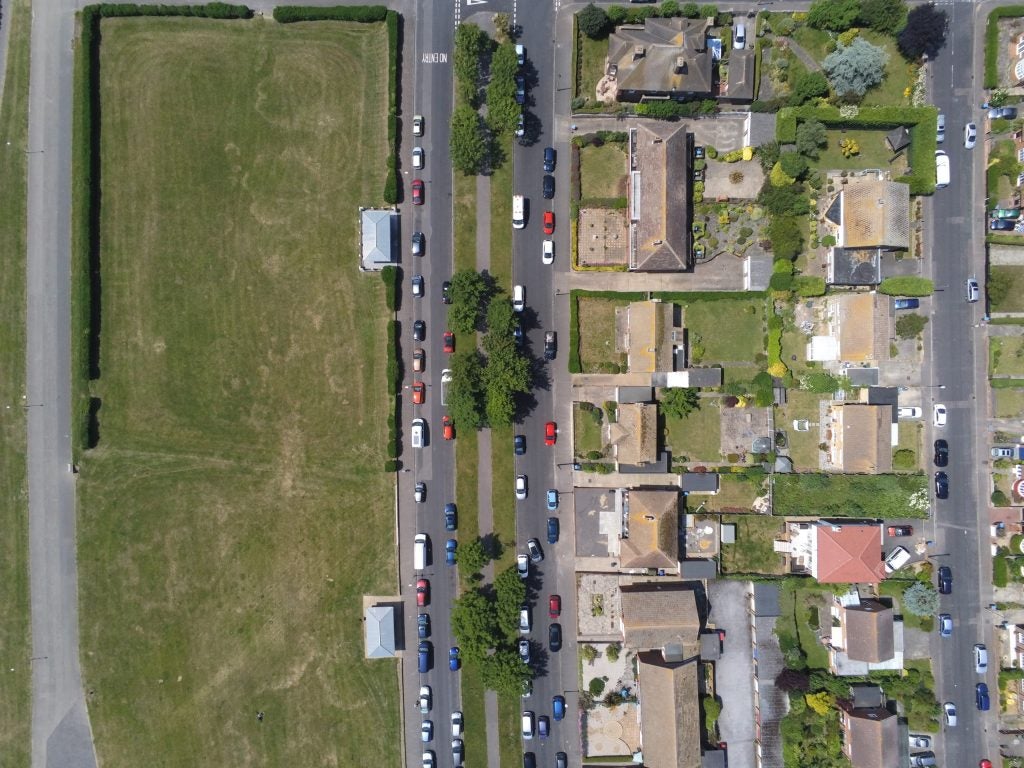