An unlikely Argos leak may have spoiled the surprise, but it couldn’t dampen our excitement over today’s announcement of the DJI Mavic 2 Pro and Mavic 2 Zoom – a pair of flying drones that share many qualities, but deviate in a couple of key ways.

Both build upon the excellent DJI Mavic Pro, which delivered fantastic performance in an ultra-compact, foldable design, making it one of the best drones on the market. But the Mavic 2 models improve on that winning formula, making them possibly the new must-have drones around.

If you’re plotting a Mavic 2 purchase in the near future, which model is best suited for your needs? Both seem suitably impressive, but one big key feature or design difference could push you towards one version or the other.

Here’s how the two DJI Mavic 2 drones stack up against each other, and what we think so far based on the released specs and announced details.

At first glance, the DJI Mavic 2 Pro and Mavic 2 Zoom look like identical twins. In fact, the official renders share roughly 90% of the same body, so flipping back and forth between them makes it look like just one part has been swapped out.

It’s the camera that visibly sets them apart, and as we’ll explore in the next section, that’s the key differentiator between these largely similar drones. 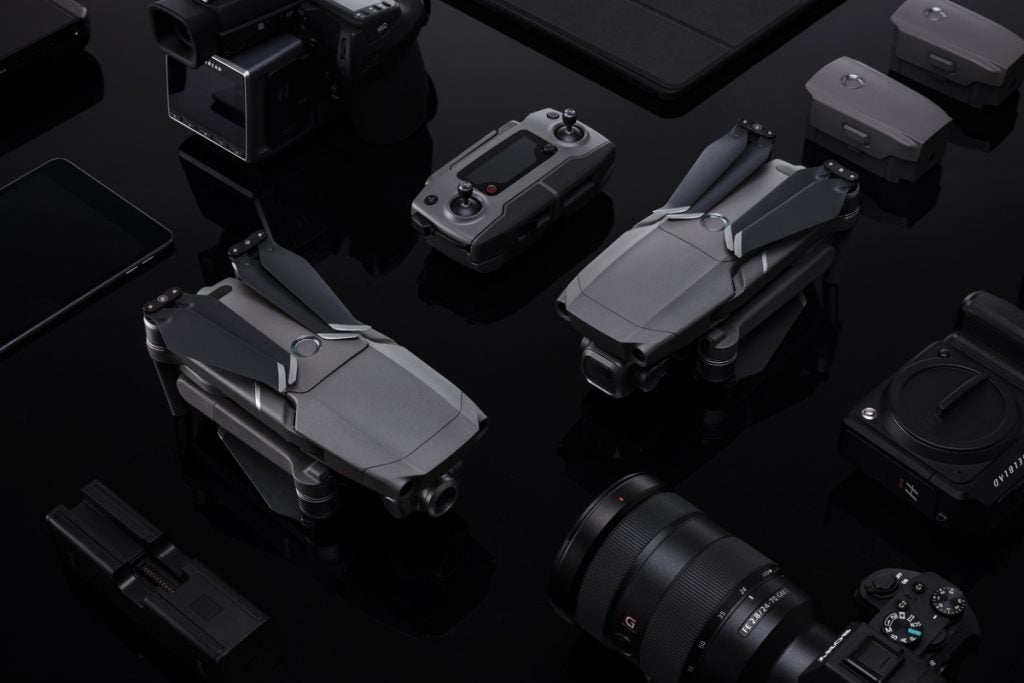 Both Mavic 2 models are also incredibly close to the original Mavic Pro in design, with the foldable design keeping them incredibly compact for storage and travel, yet still allowing for plenty of stability. We suspect that equation hasn’t changed much with the Mavic 2 drones.

It looks like a few of the harder angles have been smoothed out since the Mavic Pro, and there’s a slight difference in colour, but otherwise they’re two of a kind.

Here’s where the different Mavic 2 renditions show their stripes. The Mavic 2 Pro sees DJI teamed with Hasselblad for what sounds like one heck of an aerial camera.

It’s packing a one-in CMOS sensor with a 10-bit Dlog-M colour profile, promising four times the colours per channel compared to the Mavic Pro. It snags 20-megapixel aerial stills with an adjustable aperture between f/2.8-f/11, and uses Hasselblad’s Natural Colour Solution tech. The Mavic 2 Pro has 10-bit HDR support for its 4K footage, as well. 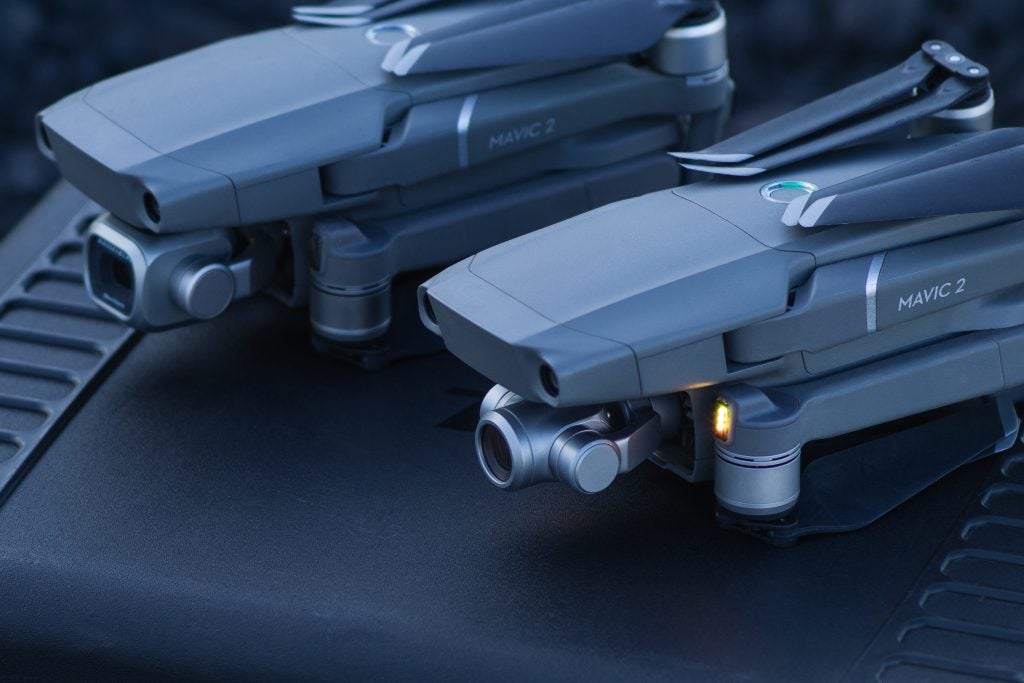 Meanwhile, the Mavic 2 Zoom lacks the Hasselblad tech, but picks up a fancy ability of its own: the 1/2.3in sensor packs zooming capabilities, and is DJI’s first folding drone to do such a thing. With 2x optical zoom (24-48mm) and 2x digital zoom in the mix, you can double up for 1080p shooting that acts like it’s coming from a 96mm telephoto lens.

The Mavic 2 Zoom drops down to 12MP stills, but has the handy ability to automatically grab and stitch together nine photos for a combined 48MP result. Plus, it includes a Dolly Zoom QuickShot mode, which DJI claims “opens a new visual language for storytelling that was previously reserved for professional cinematographers.” How? By zooming into a subject while flying away from it, maintaining the size of the subject as the full background comes into view.

Both drones’ cameras can do 4K video recording at a maximum bitrate of 100mbps with the H.265 compression codec. Meanwhile, Enhanced High Dynamic Range merges a sequence of shots for apparently “ghost-free” HDR, providing 14 stops of dynamic range on the Mavic 2 Pro and 13 stops on the Zoom. We’ll let you know if they live up to this billing in our full reviews soon.

While the Mavic 2 drones look just like the Mavic Pro, they’re been smartly streamlined to reduce body drag by 19%, boosting the top speed up to 44mph (from 40mph). Add in a more efficient propulsion system and noise-reducing propellers, and the Mavic 2 drones can last an impressive 31 minutes in the air – that’s four minutes more than before, and six minutes longer than the Parrot Anafi.

Those upgrades will no doubt be appreciated, but we’re even more excited about the prospect of the new Hyperlapse mode, which takes long, establishing time lapse shots that can look pretty spectacular based on DJI’s examples (see below). There are four different options available, too, with both manual and automatic settings in play.

Both Mavic 2 drones should be safer and more stable than ever due to a number of upgrades, including 10 total sensors on all sides of the craft to avoid collisions, along with an updated Advanced Pilot Assistance System for much the same result. They also have an automatic bottom auxiliary light for better low-light landings.

The OcuSync 2.0 system promises improved stability in the connection between the Mavic 2 drones and the redesigned smartphone-aided controller (which now has detachable control sticks). It’s apparently better able to withstand interference, and keep a 1080p feed coming to your hands at up to 8km away. The Mavic 2 drones can also save full-res JPEG shots directly to your phone, so you can share your snaps at a moment’s notice instead of moving them over from the drone itself.

Notice how all of these features apply to both drones? That’s because aside from the big camera change and the odd Quickshot like ‘dolly zoom’, the Mavic 2 Pro and Mavic 2 Zoom are functionally pretty much equals of each other.

Both drones are available from today, but here’s where the varying camera setups will impact your wallet in different ways.

The Hasselblad-backed Mavic 2 Pro comes in at a price of £1,299, while the Mavic 2 Zoom comes in a couple hundred quid cheaper at £1,099. Each drone comes with one battery, the controller, a charger, and four pairs of propellers. 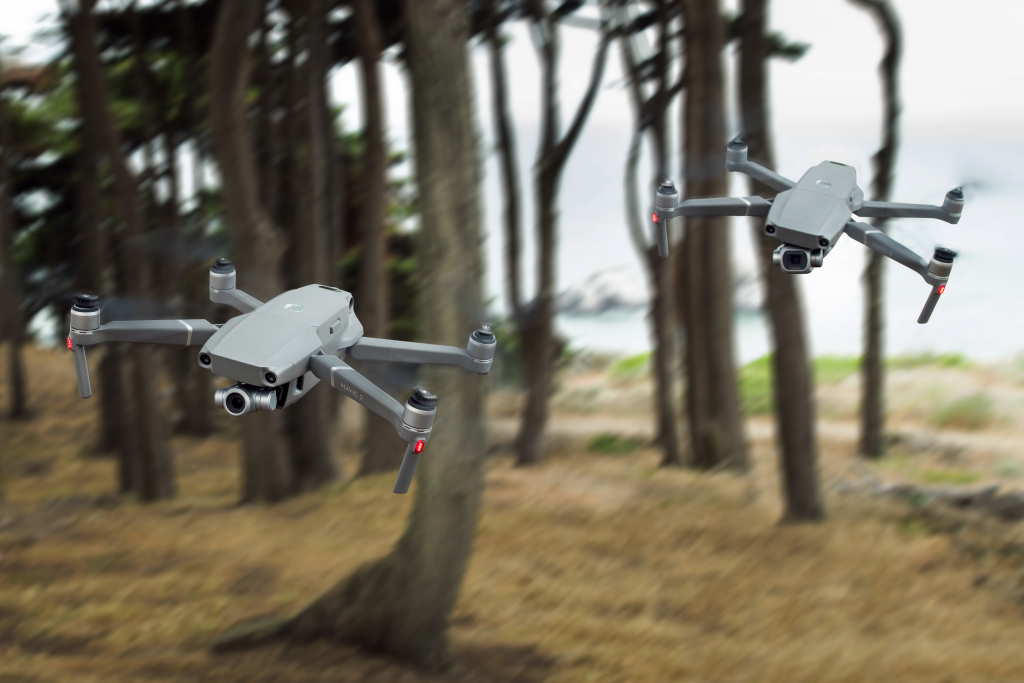 Meanwhile, a Fly More Kit is available for £279 and bundles in two extra batteries, a charging hub that handles multiple batteries, a car charger, battery to power bank adapter, two more pairs of propellers, and a carrying case for it all.

When it comes to flying around and soaring through the sky, the DJI Mavic 2 Pro and Mavic 2 Zoom hit all of the same core fundamentals. And if they keep everything we loved about the original Mavic Pro while bumping up the speed, improving stability, and adding a few more minutes of uptime, then we suspect it’ll be a great experience in either case.

But there are key differences worth exploring. The Hasselblad camera is clearly positioned as the better of the two for sterling still shots and brilliant colour and detail for your 4K HDR footage. We’ll need to see both drones in action, but the £200 price difference and bullet-point features suggest a Mavic 2 Pro camera that professionals and sticklers for image quality may want to pay extra for. 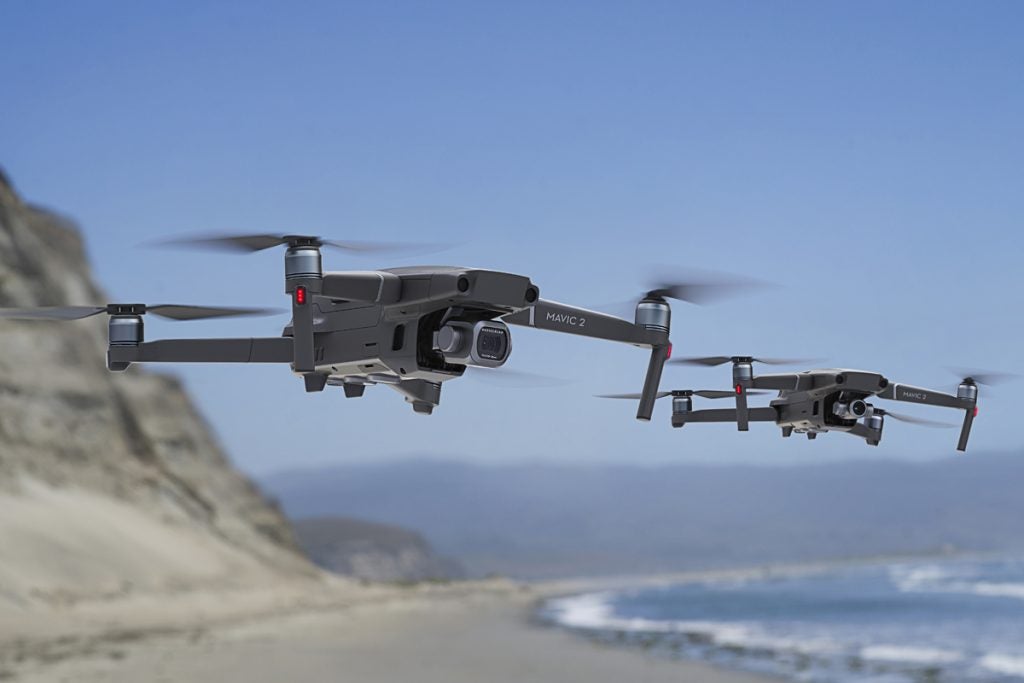 On the other hand, the Mavic 2 Zoom has its own fun, if slightly more niche, tricks. It doesn’t sound like image quality will reach quite the same heights, but the blend of optical and digital zooming capabilities could open up some fresh drone shooting possibilities, and we’re excited to see the ‘Dolly Zoom’ QuickShot mode for ourselves.

Ultimately, if the base flying experience is the same across the board, do you think it’s worth the extra £200 for boosted image quality? Or does the prospect of zooming techniques seem more compelling in the end? If you’re still unsure, then hold tight for our full reviews very soon as we get our hands on both DJI Mavic 2 drones.

What do you think, which drone are you most excited about? Let us know on Twitter @TrustedReviews.