What is the DJI Mavic Pro?

Before the launch of the recent DJI Mavic Air and the DJI Spark, the Mavic Pro was the smallest camera-equipped quadcopter in DJI’s drone line-up.

It’s soon going to be succeeded by the DJI Mavic 2 Pro and Mavic 2 Zoom, which have been leaked by an Argos listing and had their planned July 2018 announcement postponed.

Those two successors are likely to be similar to the DJI’s Mavic Pro in spirit. The Chinese company is best known for its Phantom range of affordable, easy-to-fly drones, and the Mavic Pro offers many of the same benefits.

So you get decent flight time, long-range remote control, a live video feed of the drone’s viewpoint beamed to your smartphone, and stable 4K video recording – but in a more easily portable package.

Despite its relative age, the Mavic Pro remains impressively portable, weighing just 743g and, when folded down, measuring only 83 x 83 x 198mm – more than compact enough to slip into a small bag.

It comes with a battery delivering around 27 minutes of flight per charge, plus it has a top speed of some 40mph, a 12MP camera mounted on a 3-axis gimbal, and a compact remote control that works in tandem with your iOS or Android smartphone or tablet.

DJI has also released an updated model of the Mavic Pro, called the Mavic Pro Platinum. This has 60% quieter rotors and flight time of 30 minutes. The below is a review of the original DJI Mavic Pro model.

Editor’s note: This review’s score was given at the time of testing the DJI Mavic Pro. While we’ve re-evaluated it in the context of more recent releases in this review, we’ll be re-testing it and re-evaluating its score when its successors are available. 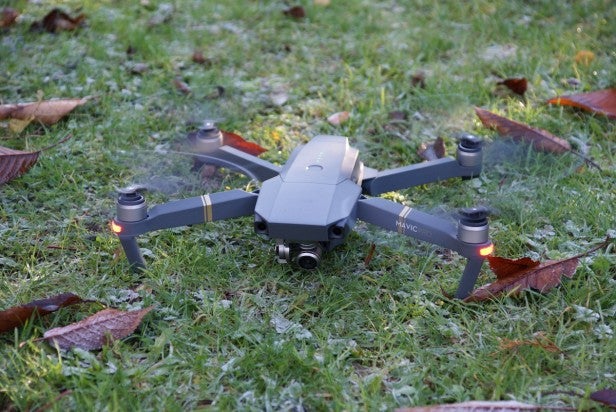 Having flown drones from the Phantom range extensively, I’d considered them to be impressively compact and lightweight for their capabilities – but the Mavic Pro is in a whole different league when it comes to portability.

When the postman delivered the box to my house I thought there’d been some mistake – surely this package, smaller than a shoebox, couldn’t contain a £1,000-plus quadcopter, a controller and a battery charger? But it did, because the Mavic is shockingly tiny compared to its Phantom cousins – about one-sixth of the size, when folded.

My immediate concern was that its small size would detract from its in-air stability and/or its image quality. But even with that niggling in the back of mind I couldn’t help but be impressed by how neatly the drone and its controller folded down.

Of course, the likes of the Parrot Anafi, DJI Spark and DJI Mavic Air have since matched it for portability, but the Mavic Pro was the first 4K drone that felt like it could genuinely be carried all day without any thought.

The Phantoms require being lugged around in special, bulky backpacks or cases, but the Mavic Pro will happily fit in the smallest of bags.

It’s solidly built too, with the majority of the quadcopter being constructed from tough plastic – handy to know, given that anyone who buys a drone is likely to have at least one or two slight aerial mishaps during their ownership.

The gimbal-mounted camera feels more delicate, but DJI supplies a clear plastic cage that protects it from harm while you’re carrying it around. 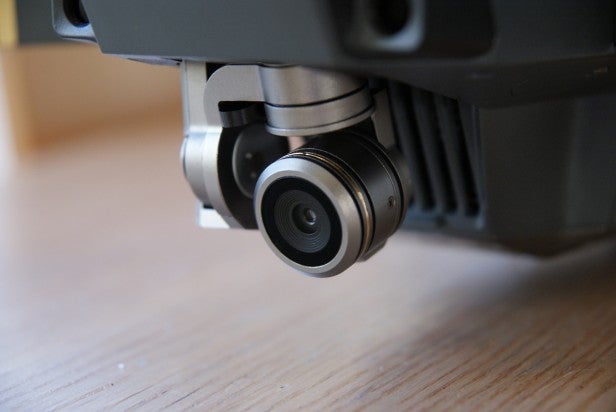 The Mavic Pro’s camera is small but fairly powerful on paper: its 1/2.3-inch sensor can capture 12MP stills in JPEG or DNG RAW format, as well as video at a variety of resolutions and frame rates: 4K at 30fps or 1080p at up to 96fps.

It’s mounted on a tiny motorised gimbal that, in combination with the drone’s suite of sensors, is able to make near-instant adjustments to keep itself level at all times. You can also set it to a POV mode, which tilts and turns it along with the drone. 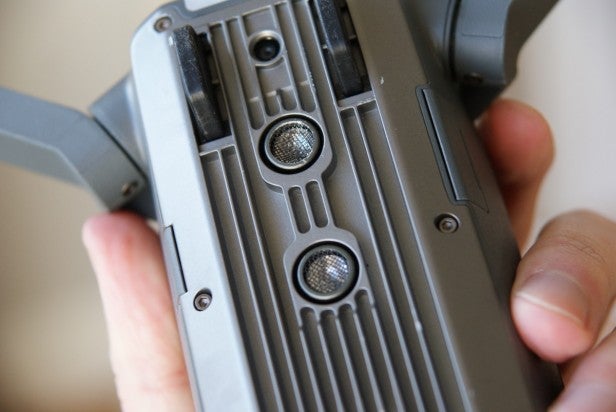 There are four other cameras on board, but these aren’t for photography; they’re to aid in-flight stability and safety. Two downward-facing cameras help keep the drone from drifting around indoors or in areas of poor GPS coverage (usually, GPS data is used to maintain position), while another pair faces frontwards, detecting obstacles in a forward arc and preventing the drone from hitting them.

It’ll stop moving if it comes within a few feet of anything solid, but only when it’s in front – the obstacle detection won’t prevent a crash if the Mavic Pro moves backwards or sideways into a tree, lamppost or neighbour’s window. So beware.

Then there’s the tiny controller, which unfolds to accommodate an Apple or Android smartphone in its grip – the phone plugs into the controller with a short cable, and the controller automatically connects to the Mavic Pro via Wi-Fi or RC. This way, you can view the drone camera’s live feed (in smooth-running, crisp 1080p) and change settings via the DJI Go app on your phone’s screen while keeping the physical flight controls within reach.

It has a long transmission range, too – DJI says up to 4.3 miles, depending on obstacles and other interference. I haven’t attempted to test that out, as flying a drone beyond visual range would be breaking UK law.

If you want to use a tablet or a phone too large to fit within the grip, there’s a full-size USB port on the bottom of the controller. Plug your device into there and it’ll work much the same as a phone – albeit much more awkwardly, as you’ll need to prop the screen somewhere while also holding the controller.

Related: UK Drone Laws Explained: Where can and can’t I fly my drone? 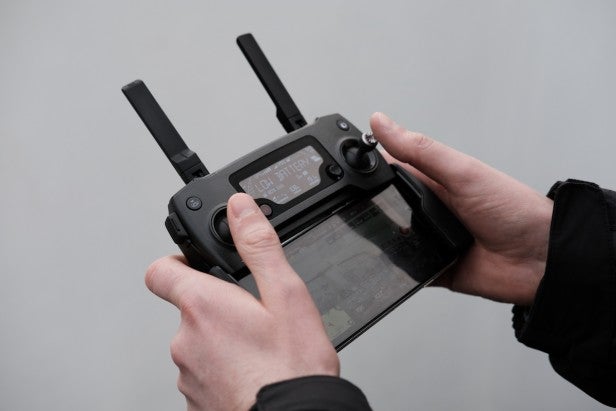 How does the Mavic Pro fly? Effortlessly – and fast. Flick it into Sport mode and it’ll hit a frankly scary 40mph (at a loss of that obstacle collision, mind), but even with its regular settings it’s a responsive, spry flier, acting instantly on your control inputs. Despite this speed, it’s possible to make precise changes too – important if you’re fussy about your footage.

It also ascends and descends at a satisfyingly rapid pelt, letting you get it in position for those all-important aerial shots and videos without eating up too much of the battery life.

Real-life battery timings accurately reflect DJI’s claims, so in regular mode you can expect around 27 minutes of air time per charge (and a lot less in the power-hungry Sport mode). Restoring an empty battery to full charge takes about an hour, so it might be worth investing in additional batteries (at £85 a pop) if you’re planning on long flying sessions out and about.

Footage and photos, meanwhile, look excellent. 4K videos are so sharp and clean that you’ll scarcely believe they came from such a small camera, while 1080p clips lack some of that impact but make up for it with a 60fps smoothness that, in some cases, you might find preferable.

That said, even with the 30fps that the 4K clips run at, I didn’t notice any major issues with rolling shutter  – merely some slight juddering when panning.

Watch some sample footage from the DJI Mavic Pro:

The 12-megapixel JPEGs are also gloriously impactful – although zooming in close on your computer screen reveals that the images are the cleanest or sharpest. You can also shoot in RAW, of course, which should allow you much more scope to tweak and “fix” problematic photos.

Worth noting, though: the physical tininess of the camera sensor means that you’re much better off doing any shooting during the day, because when things get dim there’s an awful lot of noise in both stills and videos, detracting heavily from the detail, colour and contrast.

Take a look at some sample stills from the Mavic Pro: 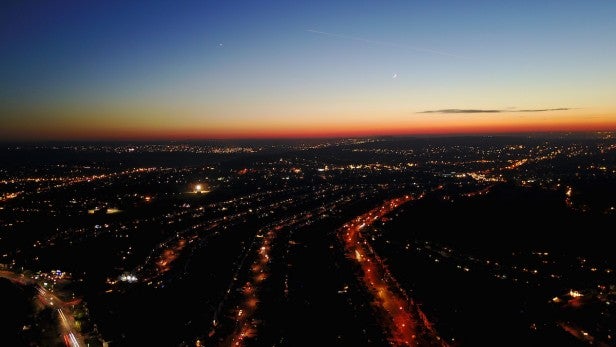 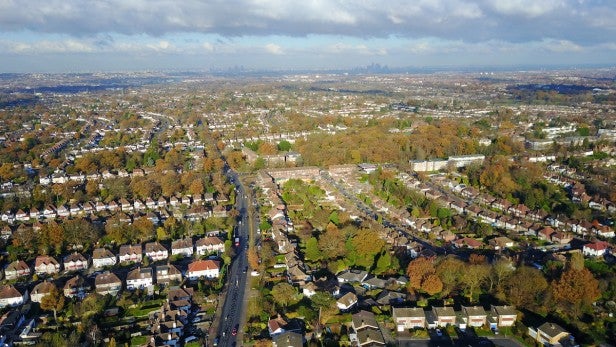 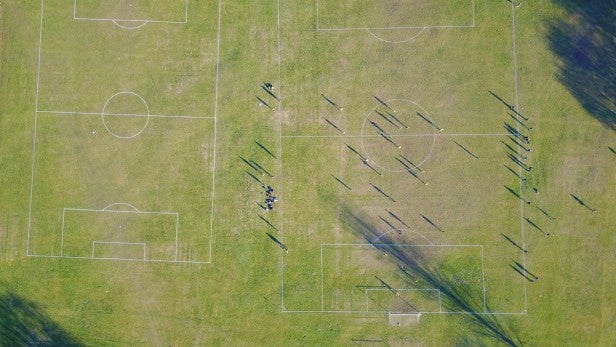 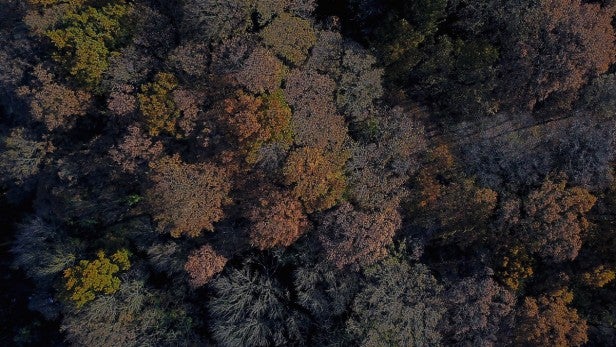 Should I buy the DJI Mavic Pro?

With the DJI Mavic 2 Pro and Mavic 2 Zoom on the horizon and DJI’s Mavic Air a better value option, you’d be wise to hold off from buying the Mavic Pro new.

However, if you want a tiny flying camera that doesn’t compromise on battery life, flying agility or image quality, then it could be well worth looking at refurbished or second-hand Mavic Pros after its successors are announced, particularly if the price drops well below that of the DJI Mavic Air.

While the Mavic Pro lacks features like zoom or 360-degree obstacle detection, which are both rumoured to appear on its successors, it still shoots excellent 4K video and 12-megapixel stills that are likely good enough for most non-professional aerial photographers.

DJI’s Mavic Air remains our pick at the £700 mark, matching the Mavic Pro’s image quality and offering superior stabilisation. If you’re not after something quite so advanced, the dinky DJI Spark is also worth considering.

But if you’re looking for your first 4K, travel-friendly drone and can’t quite stretch to the Mavic Air, then keep an eye on this model’s prices after DJI’s Mavic 2 Pro and Mavic 2 Zoom are announced later in 2018.

A small drone with serious power, safety features and agility.