What is the DJI Spark?

Drones are still considered by many a rather niche and specialist piece of technology. The thought of flying an expensive gadget that, it can often seem, is only used to create fancy shots for TV shows and movies. With its Spark, DJI is “democratising the market and simplifying complex technology”.

That marketing fluff translates to a load of added intelligence to make flying a much less daunting process for those new to advanced drones and also to make capturing photos and video much simpler. Altogether this makes the DJI Spark a seriously smart drone and incredibly fun to fly, even if some of the gestures can be hit and miss.

The DJI Spark is available standalone for £519/$499 or as part of a Fly More Combo pack that includes the optional remote control and other accessories for £699/$699, making the Spark a more expensive prospect in the UK. 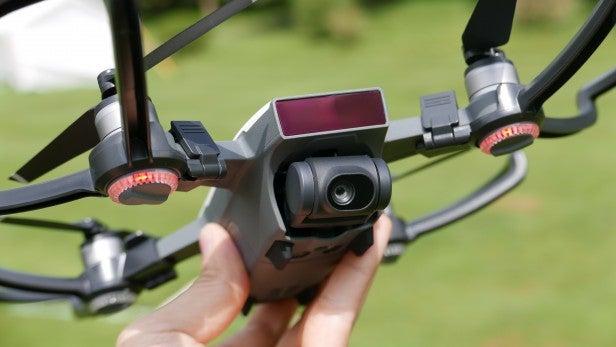 While the Spark won’t fit in your pocket like the AirSelfie, it is DJI’s smallest drone – stealing the crown from the Mavic Pro –  and its main body does indeed fit in the palm of your hand. This is important as the Spark can happily quick launch from your palm, making take-off much easier.

Having said that, as the arms don’t fold down like with the Mavic Pro, the Spark is about the same size as its bigger cousin when folded down.

The Spark is incredibly light, though, at about half the weight of the Mavic Pro. It’s so light I kept thinking I’d forgotten to pack it inside its case because you can barely feel the weight of it. You can happily throw it into a backpack ready for your next shot and not feel over-encumbered.

The Spark is available in a choice of colours including red, green, blue, yellow and white options. The colourful options add a bit of personality and fun. It’s solidly built, made from tough plastic that dealt with some rather rough “landings” during my testing period.

The camera and gimbal on the front are exposed and, unlike with the Mavic Pro, a clear helmet isn’t included to protect them. They don’t feel overly delicate but all the same I didn’t feel confident enough in them to try out a head-on collision.

Internally, there are all the sensors you would expect of an advanced drone. These include both GPS and GLONASS sensors, meaning the Spark can communicate with up to 24 satellites at the same time for precise positioning. There’s a 3D infrared sensing camera on the front for object avoidance

DJI’s vision positioning system is incorporated on the underside, which includes a downward facing camera and IR sensor, which enables it to hover indoors even when there’s no GPS or GLONASS available. 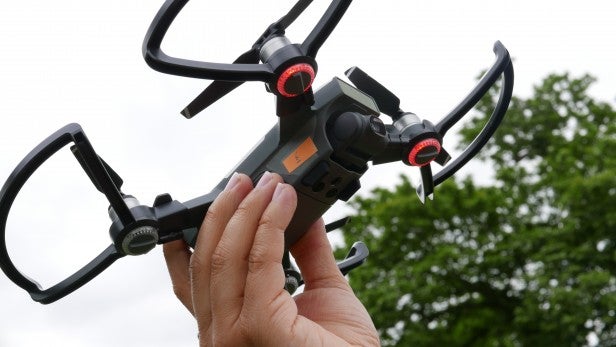 Like the Mavic Pro, the Spark will also record a video using the downward facing camera, which it then references when you use its return-to-base landing feature.

As for the camera, there’s a 1/2.3in sensor that captures 12-megapixel still images and 1080p video at 30fps rather than the 4K available on the Mavic Pro. The lens is also only 2-axis stabilised, rather than the 3-axis – the third axis is stabilised digitally. 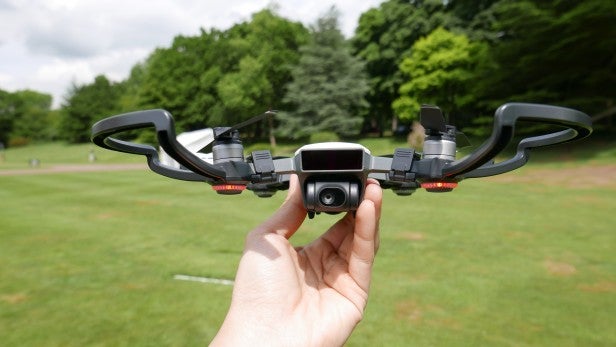 Making setup super-simple, the Spark can be controlled directly from your smartphone through a Wi-Fi Direct connection that has a 100m range. Using the DJI GO 4 app you can use virtual on-screen control sticks for manoeuvring as well as initiating the Spark’s many predefined Quick Shot movements.

Unless you opt for the Fly More Combo pack, you’ll only have smartphone controls at your disposal. As you might suspect, these are nowhere near as precise as having a physical control with a pair of sticks for fine adjustment. It means video can be a bit jerky as you rotate and adjust the drone’s positioning. There’s also the TapToFly mode, which works as you would expect, letting you select on screen where you want the Spark to go. It means you’re more able to concentrate on taking in the view.

Otherwise, the DJI Spark is as quick and nimble as any of DJI’s other drones and can be a real joy to fly once you adjust to the virtual sticks. 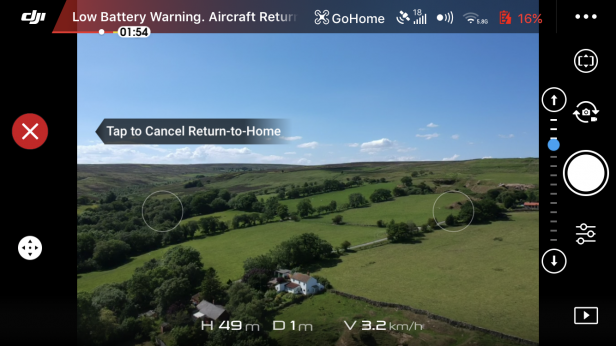 I found the 100m range possibly a little optimistic, however. The iPhone 7 I was using lost connection on a number of occasions. Fortunately, there’s a safety net in place and the Spark will use its return to home function if it loses connection for any more than a few seconds. It’s good for peace of mind.

If you have the optional remote control this unlocks the Sport mode option, which brings with it a top speed of 50km/h, which is considerably faster than the smartphone app allows. The remote control also has a range of 2km, too.

Other safety features include built-in ‘No Fly Zones’ in the app, which warns you when you’re flying in a restricted area. If you’re anywhere near an airport, the drone won’t even take off.

The app also lets you edit together your videos including adding music and effects. It’s useful if you want to quickly share to social media. 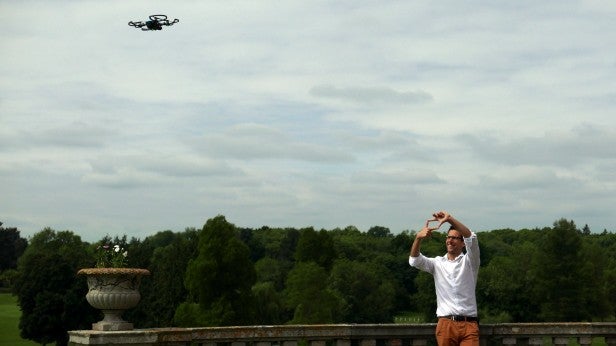 The Quick Shots I mentioned make getting cinematic shots incredibly easy and includes motions like ‘rocket’, which has the drone ascend vertically while shooting downwards; ‘circle’ that pans around a target, and ‘helix’, which is the most cinematic and incorporates a wider range of movements around a target you define in the app. 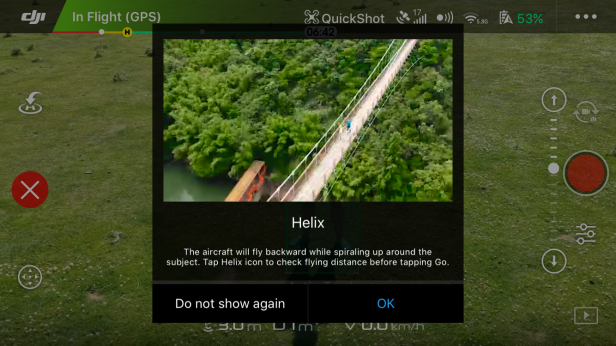 Helix, however, was the cause of a Spark flying sideways into a tree on two separate occasions. Once during the hands-on demo day while flown by a DJI rep, and when I was flying it for review. As part of a new firmware upgrade, you’re meant to be able to set the distance of each manoeuvre in the DJI GO 4 app, but even when I set it 15m it still went way beyond and into a tree. Luckily the Spark was undamaged, but it was a heart-in-the-mouth moment.

The target tracking would also occasionally fail, a few times the Quick Shot modes would lose track of the target, again mainly for the sweeping movements like Helix.

One of the other big appeals of the Spark is using the gesture recognition. Just launch it from your palm after enabling advanced gestures in the app, and it’ll hover in front of you. Then, with your face in view of the camera, hold an open palm in front of the lens. Green lights on the Spark will then tell you it has a lock and is then under your command. 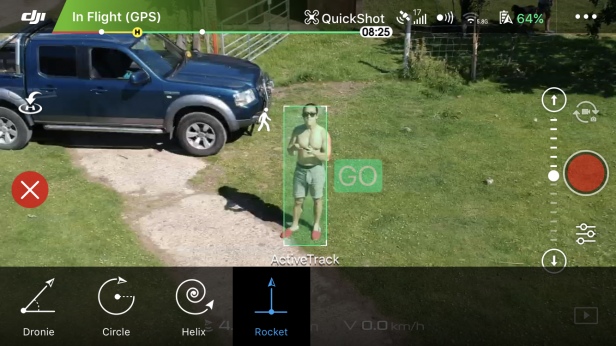 When you’re ready to take a shot, you make a frame gesture with your hands and a 3-second timer will initiate, which leaves you enough time to strike a pose. It all feels a bit Star Wars, but when it works, it’s fantastic and really makes getting a quick, impromptu shot incredibly easy. It’s also great for getting tricky group shots.

However, in testing this was also a bit hit and miss. Sometimes the camera would refuse to get a lock on my palm or it would take a long time. Also, with the drone a little further away from you, the lights can be a bit hard to see when you’re triggering a selfie. It meant I ended up with a lot of photos of me making the framing motion unsure if the camera was taking a photo or not.

There are other photography modes available, too, such as Pano mode, which stitches together 9 images into a panoramic shot. These can be either taken horizontally or vertically depending on what you want to get in the frame.

Then there’s Shallow Focus, which is great for portraits. Like many smartphone’s portrait mode, this simulates the background blur ‘bokeh’ effect by tilting the camera up and down to detect the parallax, and then the effect is applied through software.

I also took the DJI Spark along on holiday with me where I found the DJI GO app great for quickly editing together some footage. Only when you’ve brought a drone with you on your tropical holiday can you say your #holidayspam has reached elite levels.

Actual video and image quality isn’t a patch on the more expensive Mavic Pro, but results are still pretty great. The 12MP still images are decently sharp with vivid colours, but lacking a little in dynamic range, and the video has plenty of detail from your aerial shots. 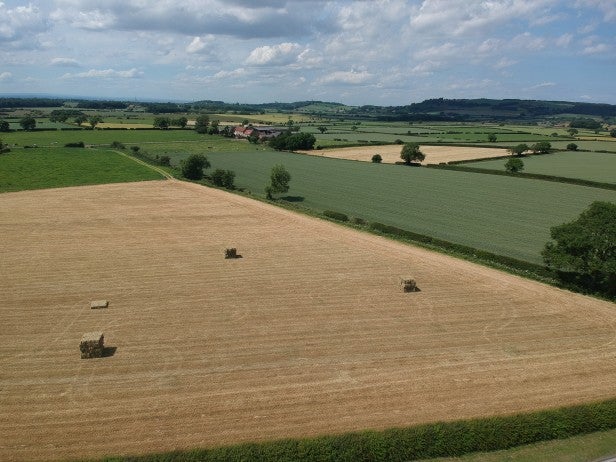 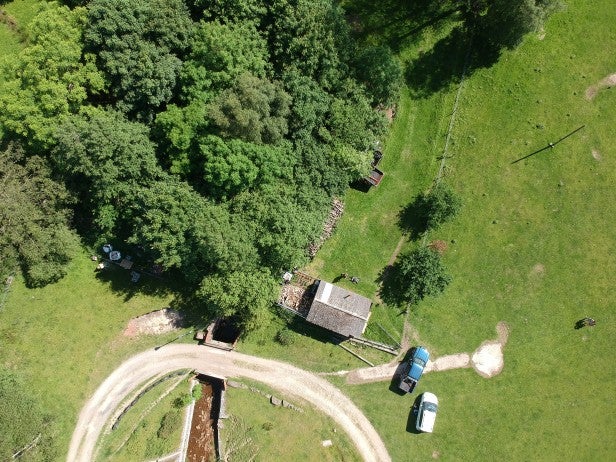 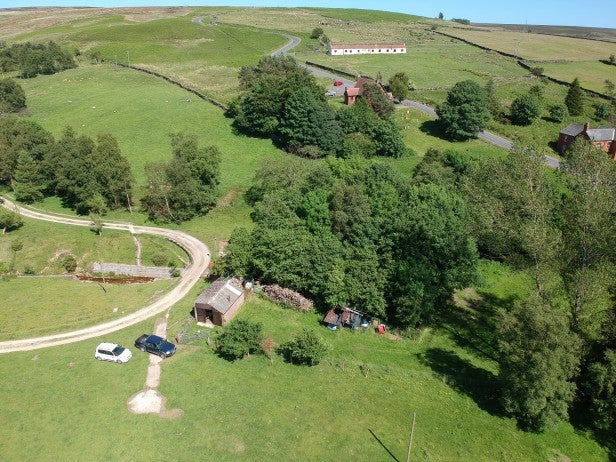 Like the Mavic Pro, though, things suffer in lower light due to that small sensor. Images are much softer and noisier as the light fades so you’ll get best results during the day. 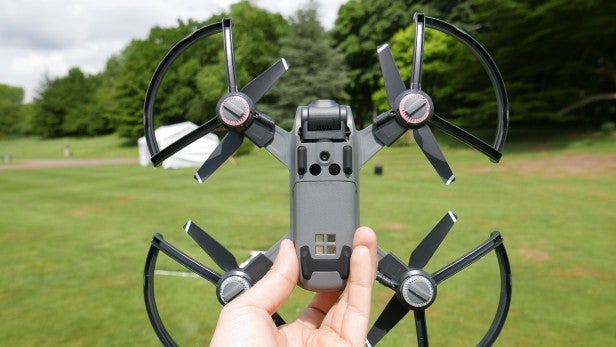 DJI is promising up to 16 minutes of flight time, which is under best-case-scenario flight. You can either use a charging cradle that comes with the Fly More Combo pack or the Micro USB charging port directly on the drone.

In real-world flight, I was seeing anywhere between 11 to 13 minutes of flight time, which isn’t amazing. Charging the batteries can take quite a long time, too, so it’s definitely worth investing in spare batteries. But at £55 a pop, these can be quite expensive. Again, it makes the Fly More Combo pack a more tantalising prospect.

I’ve definitely found the limited battery life a hindrance, even when I was carrying three batteries with me and it’s one of the DJI Spark’s biggest weaknesses.

Should I buy the DJI Spark? 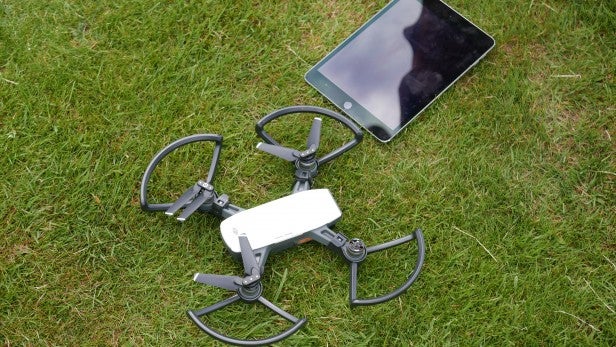 The DJI Spark is incredibly good fun to fly, and the Quick Shots are a great way to achieve dramatic shots without needing being an advanced drone pilot. The palm controls, when they work, are also great. Hopefully the kinks will get ironed out in future software updates to make it more reliable.

The Spark is, however, potentially priced a little high for some at £519 for just the drone. Arguably, you would probably want to stretch for the Fly More combo pack (£700), which includes useful extra accessories including the remote control, charging cradle, case, spare propellers and propeller guards to really make the most of the Spark’s capabilities. Prices in the US are much more affordable at $499 for the drone or $699 for the combo pack.

But if you don’t want to stretch to the fantastic DJI Mavic Pro, the DJI Spark is a fantastic first advanced drone, it’s just a shame you need the more expensive bundle to really make the most of it.