Denon’s latest 7.2-channel mid-range receiver has an even more impressive set of features than its predecessor, the awesome Denon AVR-X1300W. Its snazziest new trick is support for Denon’s HEOS multiroom platform, allowing it to integrate seamlessly with wireless speakers such as the Heos 7 HS2 – as well as bringing a wider range of music streaming services to the table.

Denon claims to have upgraded audio performance with a new hi-res audio DAC, and has added support for the Dolby Vision and Hybrid Log-Gamma HDR video standards – the latter via firmware update. 3D audio fans get Dolby Atmos and DTS:X out the box, plus Wi-Fi, Bluetooth, AirPlay and Spotify Connect. All of this can be yours for the reasonable sum of £429. 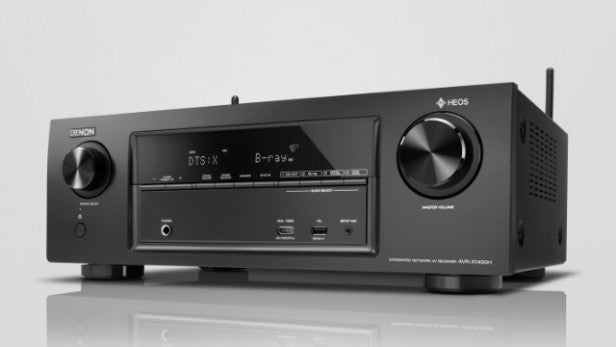 Not a great deal has changed on the design front, but I’m not complaining. The AVR-X1400H is a good-looking black box with an elegant brush-effect fascia and discreet button layout. General build quality is solid – the bodywork is rigid and weighty and the knobs turn smoothly – but the moulded plastic trim surrounding the front sockets cheapens the look a little.

The AVR-X1400H’s reasonably compact size makes it shelf-friendly, although you’ll need to leave headroom for the flip-up Wi-Fi aerials on the back. 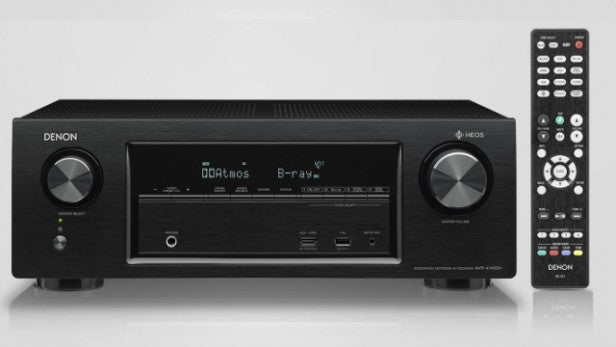 On the front, large volume and source-selection knobs flank the central display panel. The display is nice and wide, leaving room for all those long audio formats and sound modes. Below that sits a row of buttons for a seemingly arbitrary choice of functions, including tuner presets, zone 2 controls and Quick Select keys that jump straight to an input and saved settings.

Front connections include an HDMI 2.0 input, a USB port for music playback from memory devices, and a headphones output. There are five more HDMI 2.0 ports on the rear of the device and an ARC-enabled output. All of the HDMI sockets support 4K/60p, HDCP 2.2, HDR10, Dolby Vision and HLG, the latter being added via firmware update in the autumn. 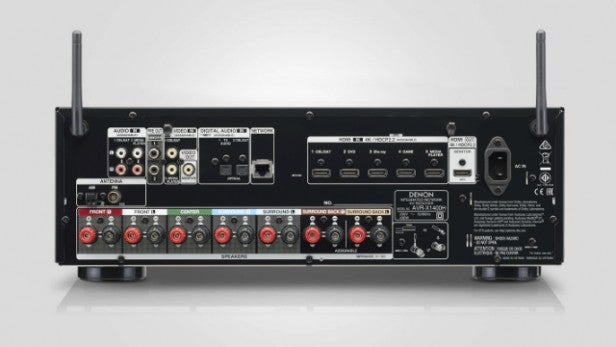 Elsewhere, you’ll find a modest selection of sockets, perhaps reflecting the decreasing need for physical connections in an increasingly wireless world. There are two optical inputs but no coaxial ports, while analogue connections are limited to two audio RCA inputs, two composite video inputs and a composite output. Dual subwoofer pre-outs cater for bass heads, while an Ethernet port gives you a more stable alternative to the built-in Wi-Fi.

Now found on all of Denon’s 2017 receivers, HEOS multiroom support lets you play music through the AVR-X1400H and an entire network of Denon speakers around your home.

And even if you don’t have any other Denon wireless speakers, you can use the HEOS smartphone app to stream music from Spotify, Tidal, SoundCloud, Napster, TuneIn radio, as well as your own NAS drives and PCs.

The AVR-X1300W could stream DLNA music and internet radio, but it was all conducted through the unit’s old-fashioned on-screen menus. Using the app is slicker, quicker and brings extra functionality to the table. It’s a great move.

With a rating of 145W per channel, there’s plenty of power in the tank. Seven discrete channels let you build a traditional 7.2 system or a 5.1.2 Dolby Atmos or DTS:X system with two height speakers. Dolby Surround Upmixer and DTS Neural:X sprinkle some 3D audio magic on regular soundtracks.

Denon has switched to the new AK4458 32-bit DAC from Asahi Kasei, which offers improved resolution and dynamic range compared with less expensive options. Also under the bonnet is a DSP chip with four 300MHz cores and new circuitry for input switching and volume.

Denon’s improved Setup Assistant makes life even easier for the uninitiated. It walks you through each stage of the process, including speaker connections, calibration, network setup and TV audio connections. The low-res text, graphics and black backgrounds still remind me of an old SNES RPG, but they’re easy enough to follow. 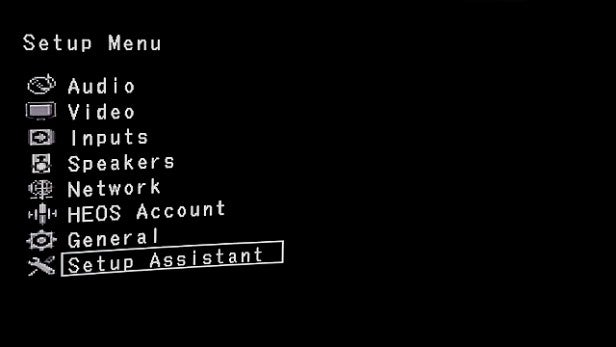 The same goes for the setup menus – old-school in appearance but clear and thorough. Given the vast amount of features on board, the fact that Denon has made installation so simple is a real achievement.

You don’t have to manually calibrate the speakers, either – the Audyssey MultEQ XT room-correction system handles that for you. Using the supplied microphone and cardboard stand, MultEQ analyses the acoustic properties of your room and sets DSP filters to ensure the optimum tonal balance. The Denon takes readings from eight listening positions for the most accurate results, but you can stop after three.

The AVR-X1400H is also compatible with the Audyssey MultEQ Editor App, which lets you customise the sound to suit your personal taste or correct specific problems. The catch is that it costs £19.99, so it’s for serious soundsmiths only.

The upgraded remote is designed for maximum simplicity. The buttons have been stripped down to the essentials, including a bank of input keys at the top and four Quick Select keys at the bottom. The volume keys are prominent, the direction pad is perfectly placed and there’s a handy HEOS key that fires up the multiroom playback. The plasticky build is a shame, but I can’t fault it for usability. 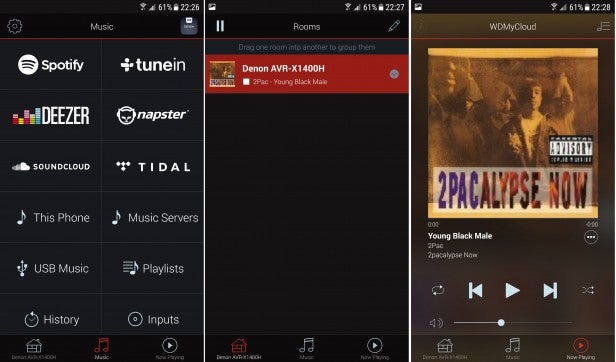 Denon offers not one but two smartphone apps to control the AVR-X1400H. HEOS takes care of all the network streaming business, and does so with aplomb.

The app is split into three sections: Rooms, which controls your entire multiroom system; Music, which lets you select a streaming source; and Now Playing, where you’ll find playback and volume controls. The menus are logical, attractive and quick in operation. 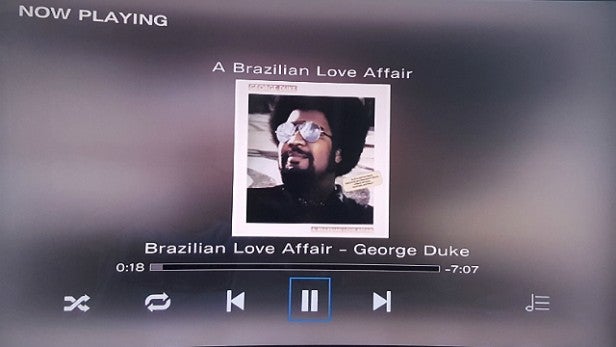 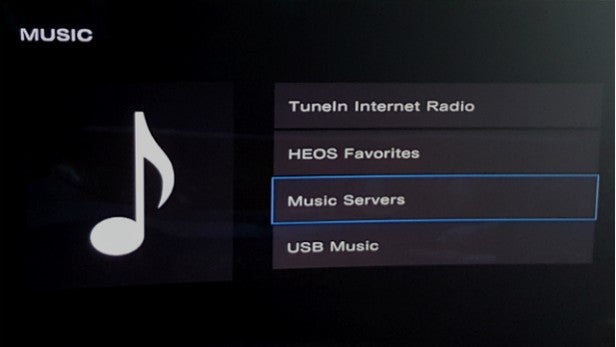 When streaming music through the HEOS app, the Denon displays the relevant cover art and metadata on your TV. Its low-res fuzziness feels outdated in today’s hi-definition world, but they have a certain charm. 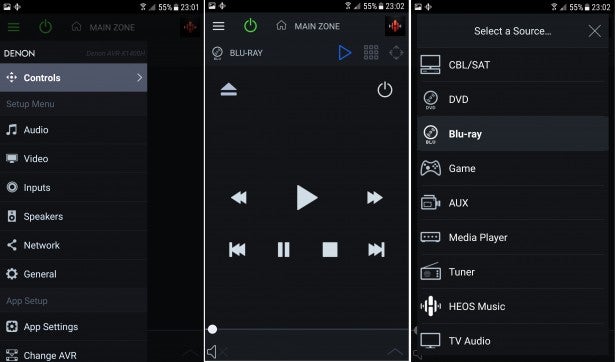 Meanwhile, the Denon 2016 AVR Remote app handles the traditional AVR functions, allowing you to switch sources, control playback and explore setup options across a series of basic menus. It’s nowhere near as slick as the HEOS app but it covers all bases. Cleverly, you can switch between the two apps using an icon at the top of the screen.

Hooked up to the terrific Tangent Spectrum speaker system, the AVR-X1400H delivers more of the same sparkling sound quality as the AVR-X1300W.

As I’ve come to expect from Denon, it’s a refined, insightful performer, imbuing movie soundtracks with plenty of crystal clear detail. Play Rogue One on Blu-ray and voices are layered with texture, while the familiar clack of Stormtrooper boots and guns in Imperial corridors are crisp and precise. 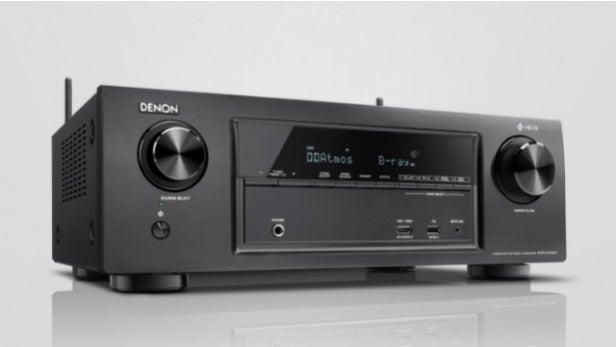 This keen attention to detail makes the on-screen action feel believable, no matter how otherworldly the situation. And when Saw Gerrera’s militants ambush Imperial forces on Jedha, the Denon’s natural clarity and poise makes the action easy to follow – there’s no congestion as explosions and blasters fill the room.

A skilled surround practitioner, the Denon pings effects between channels quickly and accurately. No matter how subtle the sound or which speaker it comes from, the Denon maintains its mesmerising clarity. Step up to Dolby Atmos or DTS:X tracks and the height channels are conveyed with similar lucidity.

It’s expressive and agile, with just enough bite to get the pulse racing. But Denon’s refined approach might disappoint those looking for a flat-out muscle fest – rival brands such as Yamaha offer a more boisterous sound, tackling the above scenes with greater vigour.

However, that’s not to say there’s no firepower behind the finesse. When the Death Star blows up Jedha City, the Denon has no trouble conveying the scale of the destruction. It builds a huge wall of sound as the tidal wave of rock thunders forward, backed by a mammoth rumble from the sub.

There’s clearly plenty of power under the bonnet, but with its smooth, measured approach it sometimes feels like the Denon is holding something back.

But these characteristics lend themselves beautifully to stereo music playback. From subtle hi-hats to vocal inflections, high-frequency detail flutters from the speakers, while the full-bodied mid-range makes vocals sound warm and emotional. It’s all reinforced by tight, punchy bass.

I played a wide range of tunes via HEOS, CD and Bluetooth and was consistently impressed by the Denon’s composure, warmth and agility.

With its comprehensive feature list, polished performance and affordable price tag, the AVR-X1400H is yet another must-buy from a brand operating at the top of its game.

Support for Dolby Vision (and HLG eventually) alongside every other 4K flavour keeps the Denon future-proofed for years to come, while the addition of HEOS multiroom makes music streaming easier than its predecessor. It’s also a cinch to install and operate.

In terms of performance, its smooth, articulate sound is textbook Denon. It teases out plenty of detail and orchestrates multi-channel soundtracks with panache. There’s plenty of scale and power, too – but bear in mind that rival amps such as the Yamaha RX-V581 offer a bigger, more boisterous sound, if that’s what floats your boat.

But in all other respects, the AVR-X1400H is a killer amp that demands a place on your shortlist.