It might be the mid-range model, but the RX-V581’s bountiful feature list would put some high-end amps to shame. It’s a 7.2-channel affair with Dolby Atmos and DTS:X out the box, plus Wi-Fi, Bluetooth, AirPlay, 4K support, hi-res audio, Spotify… the list goes on.

Sounds fabulous, but with stiff competition from the impressive Denon AVR-X1300W, it might not be the slam-dunk it looks on paper. Let’s find out how the Yamaha compares. 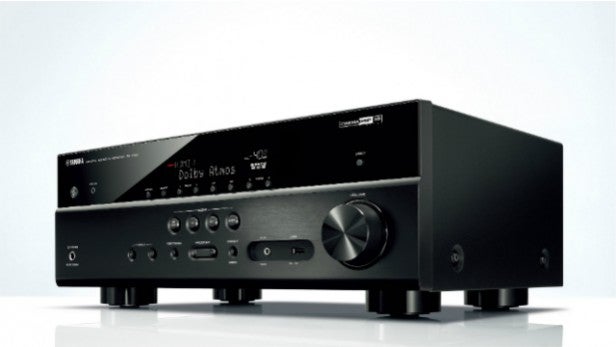 Not surprisingly, Yamaha hasn’t rewritten the rulebook with the RX-V581’s design. It’s a good old-fashioned black box with plenty of knobs and buttons to play with and a large, info-packed LED display.

The brushed aluminium finish on the lower half of the fascia adds subtle elegance. It’s weighty, robust and looks attractive – you can’t really ask for more from an AV receiver. It’s also available in a titanium finish, if you prefer. 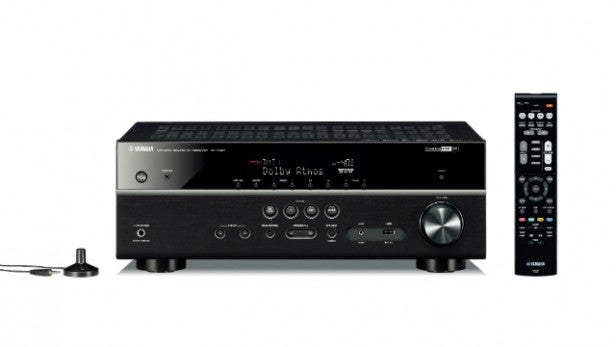 What’s more, the relatively compact bodywork doesn’t seem imposing – I doubt anyone will have trouble housing this in their AV rack.

On the front are four Scene buttons for one-touch access to selected sources, plus radio, input and DSP controls. A 3.5mm analogue input and USB port sit in a recess on the front.

The rear offers a modest array of sockets that covers most bases, but if you need connections such as a moving magnet phono stage or dual HDMI outputs, you’ll need to step up to the RX-V681 or 781. 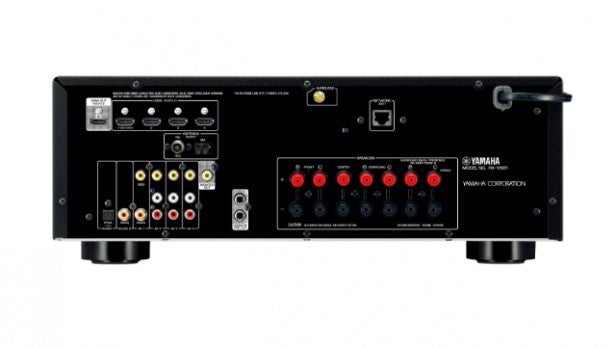 The four HDMI inputs and single output support 4K/60p (4:4:4), HDR and HDCP 2.2, are a prerequisite for Ultra HD Blu-ray passthrough. One optical and two coaxial inputs complete the digital contingent, backed by Ethernet, four composite video inputs, three analogue inputs, composite out and dual subwoofer outputs. Wi-Fi comes through a flip-up antenna that will require a little headroom on the shelf.

Seven pairs of binding posts complete the lineup, two of which can be used as surround back or height channels. And thanks to assignable amplifiers, they can also be used to bi-amp speakers or feed audio to an independent second zone.

Where do I start? This mid-range receiver is crammed with more features than you’ll know what to do with. The step-up models include even more, but the spec here is generous for a mid-range amp.

In terms of decoding, there’s support for both Dolby Atmos and DTS:X out the box, alongside all the usual formats such as Dolby TrueHD and DTS-HD Master Audio. That’s great news if you want to invest in a “3D audio” system with height speakers.
With seven channels to play with, you can create a 5.2.2-channel Atmos system with front height or overhead speakers, or a regular 7.2 setup with surround back channels. Power output is rated at 7 x 80W (6 ohms, two channels driven).

The RX-V581 can also act as your multiroom music hub, sending tracks to other MusicCast speakers around the house. It isn’t just music, either – you can re-stream TV or Blu-ray sound to other speakers, as well as audio from a Bluetooth-connected smartphone. 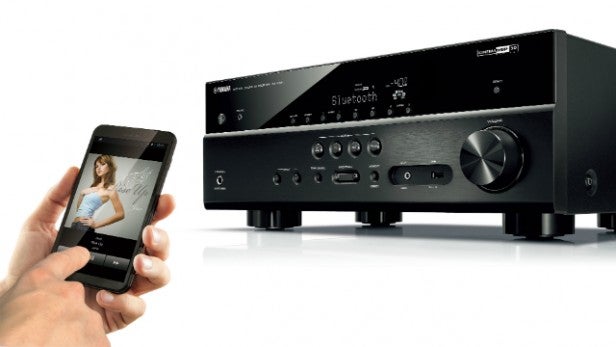 And with the MusicCast app on your smartphone, you can stream tracks from Spotify, Qobuz, Juke and Napster, as well as music stored on PCs and NAS drives. It connects via built-in Wi-Fi or Ethernet, the latter ensuring a more stable streaming connection.

Its streaming talents don’t end there; you can also zap music from mobile devices using Bluetooth, AirPlay or Wireless Direct.

The RX-V581 doesn’t shy away from high-resolution audio, either. It handles DSD 2.8/5.6MHz, FLAC, WAV and AIFF up to 192kHz/24-bit and ALAC to 96kHz/24-bit. It will play these files without gaps, which makes all the difference when listening to mixed or live albums.

As ever, Yamaha has loaded this receiver with a vast array of sound modes. Cinema DSP 3D expands the sound field in all directions; Virtual Presence Speaker adds phantom height channels to offer the feeling of an Atmos system, without actual Atmos speakers; Virtual Surround Back plays a 7.1-channel soundtrack through a 5.1 system; Virtual Cinema DSP creates phantom surround channels from two speakers; and Virtual Cinema Front creates a virtual surround soundstage with all of your speakers placed at the front of the room – handy, if you don’t have space to install real surrounds.

They’re joined by a collection of sound presets ranging from regular-sounding modes such as Standard and Sports, to more wacky efforts such as “Hall in Munich” and “The Roxy Theatre”.

Before you get stuck into movie viewing, it’s worth taking time to run Yamaha’s YPAO automatic calibration system, which analyses your room acoustics and adjusts its settings accordingly. It’s quick and accurate, but if something isn’t quite right then you can tinker with the settings afterwards in the setup menu.

Running YPAO is simple: just connect the supplied microphone to the front panel, place it in the required seating position, and run the system. It plays test tones from each channel – you’ll need to keep quiet while it runs. It takes only a few minutes to complete, and once finished the settings are displayed on-screen.

The Yamaha sends a full GUI to your TV over the HDMI output. With its basic icons and simple colour scheme it isn’t exactly sophisticated – but crucially, it’s easy to follow and there’s a thorough range of options in the setup menu. As well as speaker configuration, you can explore the various HDMI, Bluetooth and network features.

The rest of the menus are much the same – basic, but get the job done. When playing music via DLNA, AirPlay or net radio for example, you get a small box in the bottom corner against a black background providing the artist, title, album and cover art.

Build quality of the supplied remote leaves a lot to be desired – with its light, plasticky casing – but otherwise, it’s a decent zapper. The crucial controls are thoughtfully placed. 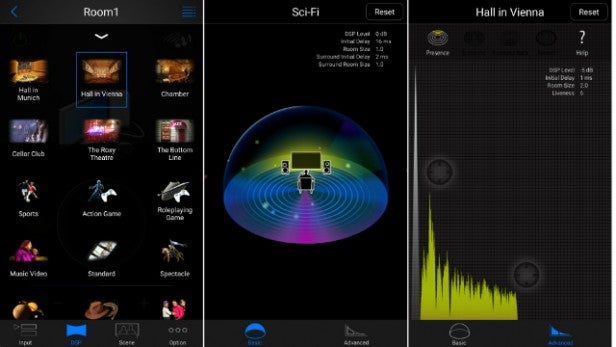 For a slicker way of controlling the RX-V581, Yamaha offers not one but two terrific smartphone/tablet apps. The first is AV Controller, which turns your phone into a full remote control, allowing you to select inputs, adjust audio settings and switch DSP modes. Its intelligent, no-nonsense layout makes it a joy to use.

The app goes into far more detail than the on-screen menus, allowing you to set the parameters of each DSP mode. To do this, the app shows you a graphic of a bloke in a seat surrounded by rings; simply drag the rings in and out to change the level, delay, room size and “liveness” of the sound.

It’s effective and a lot of fun, if you’re into that sort of thing. An Advanced version lets you do the same thing but by dragging a graph around. 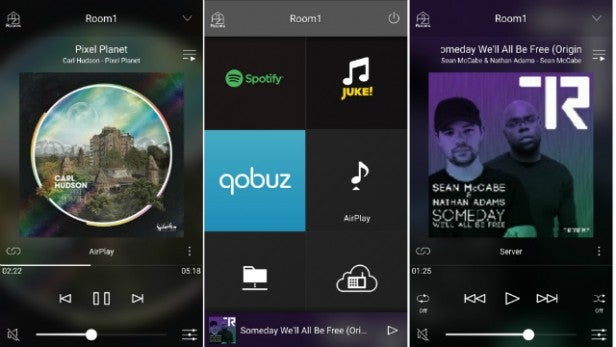 The MusicCast app throws multiroom functionality and music streaming into the mix. Again, the stripped-back layout is highly approachable, making it easy to find music on NAS drives or cloud services.

The copious use of logos and cover art is easy on the eye, and I had no buffering or connection issues as I streamed music from my servers. Creating a multiroom group is easy – just tap the “Link” icon in the Rooms menu and select the speakers you want to include.

However, it would be nice to see Yamaha merge the two apps into one at some point – switching between them for certain functions is a little annoying. You can’t access the network through AV Controller, while MusicCast affords you only limited control over the RX-V581’s features.

Fierce, exciting and remarkably powerful, the RX-V581 was born for home cinema. When Krall attacks the Enterprise during Star Trek Beyond, the intergalactic battle is handled with high intensity; explosions hit hard and spaceships roar.

As Krall’s “bees” rip the iconic spacecraft to bits, the score and effects are fired into the room with relish, creating a huge, engulfing wall of sound. It leaves you in no doubt over the epic scale of the battle, with plenty of deep rumbling bass and objects swooshing all around the room.

Actually, it’s more like a bubble of sound than a wall – the Yamaha really makes the most of Star Trek Beyond’s cracking Dolby Atmos soundtrack, skilfully expanding the soundstage upwards. When played through the superb Definitive Technology BP9000 series speaker system with its add-on Atmos modules, those bees swoop above your head clearly and quickly, while big explosions seem to reach right up to the ceiling.

Bass is deep and punchy, locking tightly to the bangs and crashes, while padding out quieter effects and dialogue. It’s never boomy or overpowering – testament to the effectiveness of the YPAO calibration system. What you get is a huge, authoritative bottom end that effortlessly heightens the drama of big action scenes.

At the other end of the spectrum, the Yamaha demonstrates clear high frequencies as the Star Trek crew explores the jungles of planet Altamid. Creatures flutter above the soundstage, while rustling bushes and footsteps have plenty of top-end texture.

The Yamaha’s tone is attacking and forceful, which is naturally exciting and makes you feel engaged in the movie. Few AVRs can match Yamaha for sheer dynamism.

It occasionally sounds brash, though, especially when you push it towards the top of the volume range. And although it isn’t quite as attacking, the similarly priced Denon AVR-X1300W is even better at teasing out top-end and mid-range detail. Its smoother, more fluid approach makes for a more satisfying listen overall, even though you miss out on the Yamaha’s added bite.

It also means the Yamaha isn’t quite as musical as the Denon, lacking the same poise and attention to detail. But it’s still an enjoyable listen. There’s a good overall balance, gelled together by the taut, well-integrated bass. Treble is crisp and vocals have real presence. Its punchy, rhythmic presentation gets your toe tapping as it fires out perky pop tunes. 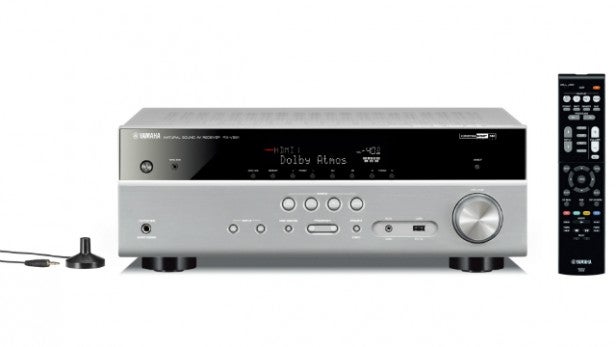 If you want high-octane home cinema thrills without breaking the bank, you’d do well to check out the RX-V581. Not only does it deliver a powerful, exhilarating performance, but it’s also bursting with features, including Dolby Atmos, DTS:X, AirPlay and MusicCast.

It’s also a top-drawer music streamer and provides outstanding installation flexibility, thanks to its wide range of DSP and virtual surround modes.

The only caveat is that the similarly priced Denon AVR-X1300W does a better job at conveying detail with its richer, more expressive sound. The Yamaha goes for flat-out excitement, which works brilliantly for action flicks, but falls short when more subtlety and finesse is required.

That aside, the RX-V581 represents fantastic value for money and is well worth a place on your shortlist.

Yamaha’s great-value Atmos AV receiver delivers a thrilling performance and plenty of features at a low price, even though some rivals offer a more sophisticated listen.