The Heos 7 HS2 is an updated version of the Heos 7, Denon’s flagship wireless speaker. We were highly impressed by the original version’s killer design, slick multiroom streaming and muscular sound, but the lack of built-in Bluetooth or Hi-Res Audio support denied it the top accolade.

Sensibly, Denon has revisited the Heos 7 and incorporated Bluetooth into the unit itself, rather than throwing in a USB dongle. It’s also added support for Hi-Res Audio files and tweaked the electronics to improve sound quality. 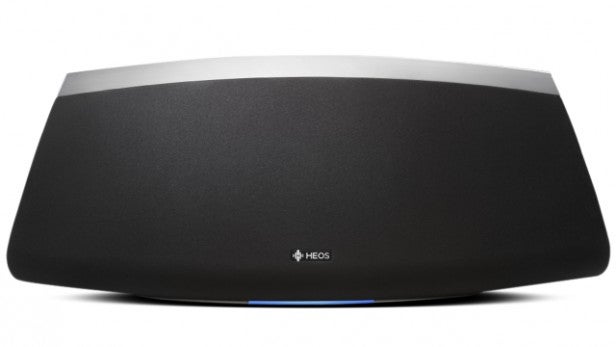 The spec may have changed but, thankfully, Denon has left Heos 7’s design well alone. It’s a classy, distinctive speaker with a teardrop side profile and minimal front clutter, apart from a discreet Heos badge. The bodywork is mostly clad in a white cloth grille (also available in black), topped off by an eye-catching brushed metallic apex.

It’s still one of the most impressively made wireless speakers I’ve encountered, with a weighty, robust enclosure that fully justifies the price tag. Rubber strips on the bottom provide excellent grip and vibration control when placed on a tabletop.

It’s worth noting that Heos 7 HS2 is bigger than most wireless speakers, measuring a princely 479mm wide. That’s because it’s designed to fill big rooms using the largest driver array of any Heos speaker – seven to be precise.

A strip of light at the bottom not only looks cool but also provides crucial status information in lieu of a text-based display. It flashes green during setup and solid blue when connected. 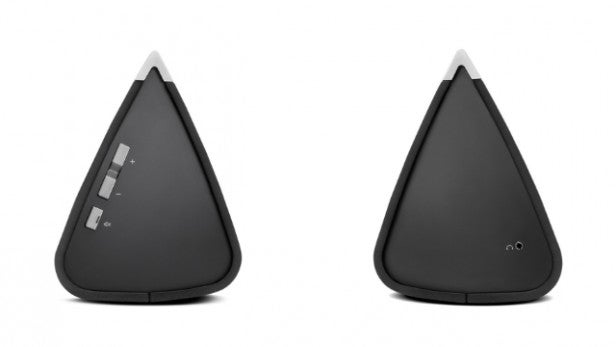 Chunky volume and mute buttons are placed on the side, while at the other end is a 3.5mm headphones output, not found on any other Heos speaker. The rear socketry selection is the same as before, with a 3.5mm analogue input and USB port allowing you to play music from portable devices, an Ethernet port and ‘Connect’ button that comes into play during setup. 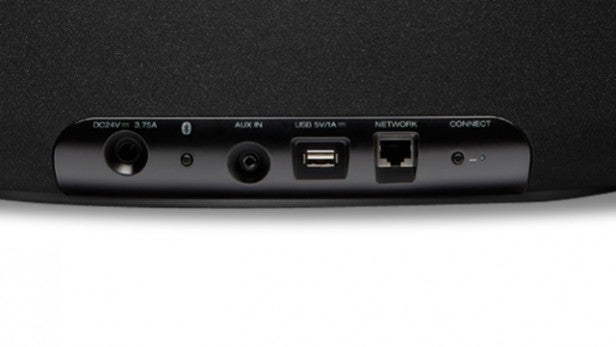 However, there is one important new addition – a Bluetooth pairing button, which takes the place of original Heos 7’s reset button.

The big news on the features front is the addition of integrated Bluetooth and support for Hi-Res Audio. The original Heos 7 came with a Bluetooth dongle, but it felt like a hasty workaround – having it built in is much more convenient and frees up the USB port.

Elsewhere, the Heos 7 HS2 comes with the same dizzying array of streaming functionality and hi-fi technology. At the heart of the Heos multiroom system is a smartphone app that enables you to stream music from Spotify, Deezer, Napster, Tidal, SoundCloud, TuneIn radio and Mood:Mix. Most of these are natively integrated into Heos, but Spotify requires the dedicated app. 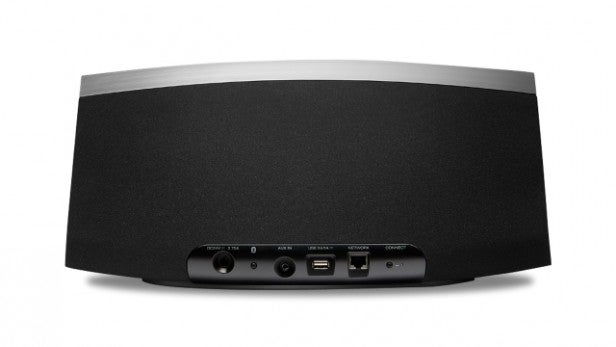 You can also access music stored on NAS drives and PCs on your home network. The system supports lossy MP3, WMA and AAC files, lossless FLAC, ALAC and WAV up to 192kHz/24-bit, and DSD 2.8MHz and 5.6MHz.

The Heos app also lets you send individual songs to each Heos speaker around the house, or play the same track through them all in Party Mode.

As an added bonus you can connect a device to one Heos speaker via Bluetooth or analogue, and re-transmit it to other speakers in the ecosystem. Another nifty feature is the ability to use two Heos 7s as left and right channels in a stereo pair.

Linking the Heos 7 to your home network is a largely automated process through the helpful Heos app. But, unusually, it involves running a cable between your phone’s headphone port and the Denon’s 3.5mm aux input, which seems odd but worked without a glitch. 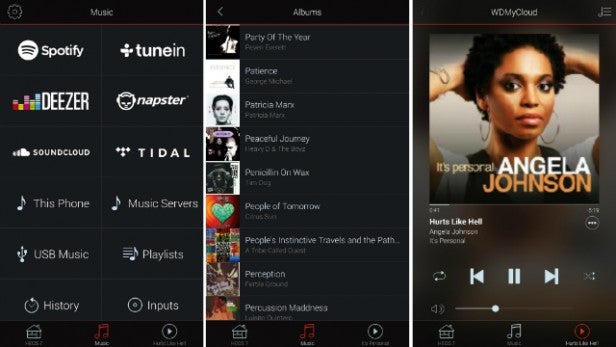 The Heos app hasn’t changed since we reviewed the original Heos 7, and it remains one of the best around. The layout is simple but attractive, with judicious use of icons and logos. It doesn’t go overboard with flashy graphics and animations like some apps – ease of use is the priority here. What’s more, it’s quick to react and doesn’t get flustered when swiping quickly through long lists of albums or tracks.

The app is basically split into three sections, which you can select using the tabs at the bottom. The first allows you to control your multiroom system. To group Heos speakers together, just drag and drop them onto one another – the music is magically zapped to all the speakers involved.

The Music screen displays available sources and streaming services on a black background. The services are identified by their logos, which is a nice touch, while NAS drives are found under the Music Servers option. Albums are displayed with cover art thumbnails; another example of the app’s attractive presentation.

A third screen displays the current song alongside a range of playback controls and a volume slider. An EQ menu allows you to adjust the bass and treble, while an icon at the top calls up the playback queue, where you can delete tracks or create a playlist from queued tracks.

The only niggle Denon hasn’t ironed out is the inability to jump into the middle of song using the track timeline when streaming from a NAS drive – you can only play it from the start. However, some of the integrated apps, such as SoundCloud, allow you to do it.

Just like the original Heos 7, the HS2 delivers a huge, muscular sound that would have no trouble filling a village hall, let alone a living room. The combination of deep, beefy bass and a full-bodied mid-range give everything solidity and warmth.

The tight fusion of thumping kick drums and a live bassline in “Something About You” by Sean McCabe results in a remarkably cohesive sound. The Denon drives the tune along with great energy and a superb rhythmic sense, making head-nodding compulsory. 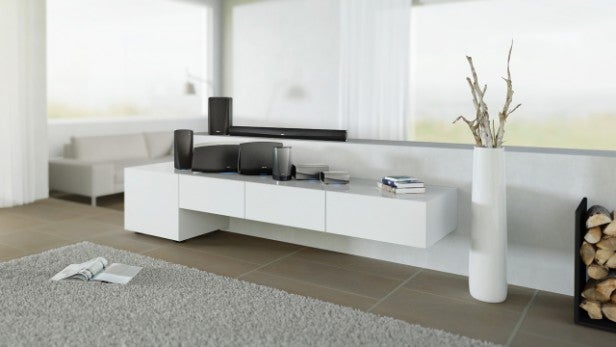 It packs a huge punch and goes extremely loud. Admittedly, it loses composure and bass control when you push it over 70%, but it will be plenty loud enough before you even get that far.

Vocals are clearly projected and laden with texture, while instruments such as flutes and guitars have a natural, well-rounded tone. Dynamically, the Denon really hits the spot, attacking snare drums with vigour and lending anthemic crescendos pleasing scale and drama.

Tricky rhythms are handled with great agility, and the tweeters tease out plenty of detail. The subtle wind chimes that open “Rainbow Seeker” by Joe Sample have an airy quality; likewise the percussion that tinkles throughout the track. Sample’s dazzling piano solos are crisp and precise.

Switch up to Hi-Res files and the Denon makes the most of its new-found talent. “Barcelona Nights” by David Benoit and Jane Monheit (96kHz/24-bit FLAC) sounds gorgeous – the Spanish guitar break is rich and detailed, while the busy percussion is layered and spacious. The leap in quality sounds obvious through the Denon.

The only negative is that the Denon’s bass output is rather overpowering and boomy, threatening to stifle other elements of the music. Thankfully, you can reduce the level in the EQ menu, which offers better integration if you want it. However, fans of a warm, bassy sound will love the out-the-box settings. 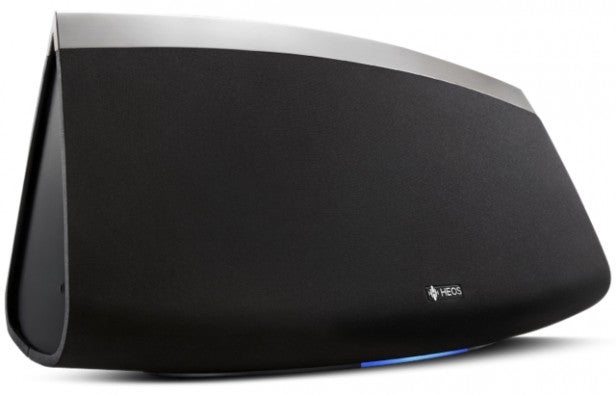 Should I buy the Denon Heos 7 HS2?

The original Heos 7 was already a superb wireless speaker, but the addition of integrated Bluetooth and Hi-Res Audio support takes it to the next level. Whether or not these features should have been included the first time round is a moot point – what matters is that they’re here now and turn the Heos 7 into a formidable multiroom proposition.

But why should you buy this instead of wireless speakers from the likes of Yamaha, Panasonic or Cabasse? For starters, the Denon delivers one of the biggest and most powerful soundstages of any speaker in this price bracket.

It easily fills a large room with sound, offering silky detail, deep bass and a robust mid-range. What’s more, Heos is a superb multiroom system, offering an extensive range of online services and streaming music from NAS drives with ease and sophistication.

The only downside is the overpowering bass, which could be an issue for those who prefer a leaner sound – but that isn’t a major issue if you like that sort of thing; if not, the EQ settings provide a decent remedy. Overall, the new and improved Heos 7 gets a big thumbs-up.

The Heos 7 HS2 is the wireless speaker Heos 7 should have been, combining room-filling sound and slick streaming with built-in Bluetooth and Hi-Res Audio support.