The similar Denon AVR-X2300W is currently on sale on Sevenoaks, meaning you could save £100. Check out our Black Friday deals for more savings, and get a deal on the Denon AVR-X2300W below:

This 7.2 channel AV receiver is the successor to the fabulous AVR-X1200W, which blew us away in 2015 with its extensive features, scintillating performance and affordable price tag. A glance at the X1300W’s particulars reveals more of the same, except this time round Denon has tweaked performance and usability while packing in even more features.

Available exclusively from Superfi, the AVR-X1300W offers Dolby Atmos and DTS:X compatibility, plus music-streaming features and support for Ultra HD Blu-ray. It’s yours for just under £400, which is what the AVR-X1200W cost at launch before having its price slashed by £100 a few months later – fingers crossed that happens again. Either way, this looks like a no-brainer.

AV receivers are rarely a work of art, but Denon has done a fine job with the AVR-X1300W. Dressed in black from top to toe, its clean, elegant styling blends nicely with my other black boxes and takes up less space than you might think. Its classy brushed fascia plays host to huge volume and source select knobs, but other controls are kept to a minimum.

The front is dominated by a large display window that imparts information clearly, while the row of buttons running along the bottom includes four “Quick Select” input presets. Lower down you’ll find an HDMI 2.0 input, a USB port, a headphones output and a port for the Audyssey setup microphone. Hiding these behind a cover might have looked a little cleaner, but overall the AVR-X1300W is a fine-looking unit.

The rear panel sports a healthy range of sockets that covers most bases, although it doesn’t go overboard – owners of bigger and more complex systems might want to investigate the step-up AVR-X2300W (£499).

Attention is drawn to the five HDMI 2.0 inputs and one output, all of which support HDCP 2.2 and pass through 4K/60p and HDR signals, making the Denon suitable for use with Ultra HD Blu-ray players. The HDMI output also supports Audio Return Channel.

Like an AV Noah’s Ark, the other sockets come in pairs – two analogue inputs, two optical digital inputs, two subwoofer outputs and two composite video inputs. Composite out, Ethernet and FM/AM aerial terminals complete the lineup. It’s a shame there are no coaxial digital inputs, but you can’t have it all.

There are seven pairs of binding posts – two of which can be assigned as surround back channels or height channels in a 5.1.2-channel Atmos setup. Alternatively, they can be used to drive speakers in a second zone while you listen to 5.1 sound in the main room. 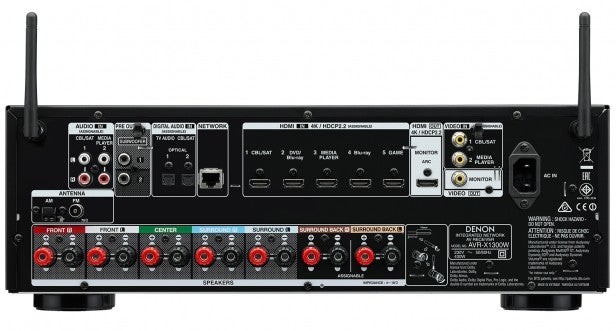 The AVR-X1300W’s power output is rated at 7 x 145W (into 6-ohm, 1-channel driven) or 7 x 80W (8-ohm, two-channel driven). There’s on-board decoding of Dolby TrueHD and DTS-HD Master Audio, plus Dolby Atmos 5.1.2 and DTS:X 7.1 – the latter might require you to perform a recently released firmware update. You also get Dolby Surround and DTS Neural:X upmixing, which create 3D audio from any source.

Elsewhere, the AVR-X1300W adds more new features: 5GHz Wi-Fi support, extended-range audio delay, support for the Audyssey smartphone app, and playback of DSD files up to 5.6MHz over a network.

Talking of network playback, the Denon streams music via AirPlay, internet radio, Spotify Connect and DLNA. You can stream MP3, WMA, AAC, FLAC 192/24, WAV 192/24, AIFF, DSD and ALAC 96/24 from PCs and NAS drives, with gapless playback of all formats.

There’s built-in Bluetooth and a front USB port that can be used to play music from USB drives (including hi-res files), or from Apple devices while they charge.

Installing an AV receiver used to be a long, soul-destroying process, but the Denon’s convenient setup tools banish those memories forever. Rig up its HDMI output to your TV and a terrific Setup Assistant runs you through all the crucial settings, including Wi-Fi setup, speaker connections and audio calibration. 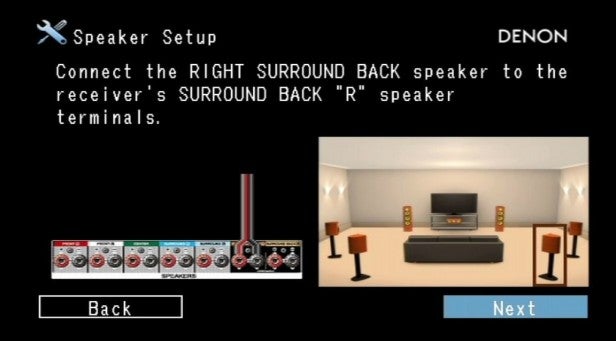 The menus look like a 1990s SNES game, but the use of coloured diagrams helps get the point across. On-screen instructions are well written, and there are some helpful touches such as playing internet radio to confirm you have a network connection.

As part of the setup assistant, the Denon runs Audyssey’s MultEQ XT calibration system, which measures the acoustics of your room and tweaks the EQ accordingly. In the box is a microphone and cardboard tripod, which are used to take measurements in up to eight positions in the room. You can stop after two, however. The process is quick, hassle-free and accurate – it recognised my connected speakers and got the distances spot-on.

You also have the option to activate Audyssey Dynamic Volume and EQ, which monitor the volume level and tonal balance respectively to ensure optimum clarity no matter what you’re watching. I turned them off to minimise processing, but they’re a helpful tool for beginners.

Once installed, the manual setup menu lets you make further tweaks. Using blocky white text and icons on a black background, it’s as basic as menus get, but it covers a lot of ground and proves easy to follow.

Denon jazzes things up in the Online Music menu, where you can access internet radio and media servers. Navigating through to your desired album or song couldn’t be easier, thanks to the Denon’s easy-to-read on-screen text and quick reaction times. Play a track and the metadata is displayed alongside cover art, with helpful shortcuts listed at the bottom. 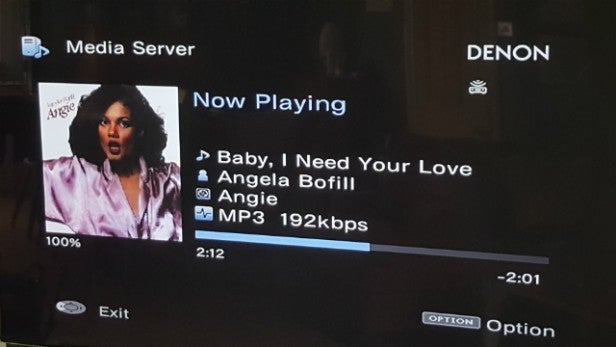 The AVR-X1300W comes with the same remote as its predecessor, which is good news and bad. On the plus side, it’s easy to explore menus thanks to its stripped-back layout and clear labelling. Each input receives a dedicated button, while the volume and menu controls are easy to identify – they even glow in the dark. On the downside, it has the same cheap, flimsy feel as before – qualities you wouldn’t normally associate with Denon.

For a more sophisticated way of controlling the AVR-X1300W, connect it to your network and install Denon’s 2016 AVR Remote app onto your smartphone or tablet.

Like Denon’s HEOS app, it offers quick, seamless music streaming and lets you control various functions by swiping and tapping. How very modern. You can even manage your multiroom system, selecting what sources to play in zones 1 and 2.

The app is skilfully designed, packing in lots of functionality without seeming cluttered or unnecessarily flashy. The layout and colour scheme are quite simple – white text on black backgrounds – but that makes it very easy to use.

In terms of sound quality, Denon says the AVR-X1300W improves on the AVR-X1200W in two key areas. First, better components are used in the power amp stage, which improve low frequency bass performance, overall attack and musical expression. The output stage has also been enhanced for better stability.

Without an AVR-X1200W to compare it with, it’s difficult to assess the impact of these improvements, but the AVR-X1300W certainly inspires similar feelings of excitement and wonder when playing Blu-ray discs. Subjectively there seems to be more pep and power to its sound, blasting out blockbusters with astonishing control and refinement.

Its ability to paint room-filling sonic landscapes makes it easy to lose yourself in the movie. Accurate effects placement, fast, fluid steering between channels, and bell-like clarity across the entire frequency range – this is an AV receiver punching above its price tag.

To test the Denon’s performance with both regular and Dolby Atmos/DTS:X soundtracks, I rigged it up to a 5.2.2 speaker system from Definitive Technology’s magnificent new BP9000 series. Up-firing A90 modules placed on top of the front floorstanders generate the height effects.

Despite its budget billing, the Denon has absolutely no trouble driving this high-end speaker setup and conducts the 3D soundstage like an old pro.

I played Crimson Peak’s stunning DTS:X 7.1 mix and the Denon nails the sense of vertical space and immersion. When Edith first enters Allerdale Hall, distant creaking and rustling from up above communicate the sheer height and vastness of the crumbling manor.

In fact, the entire second half of the movie is basically one big DTS:X demo, and the Denon has no trouble digging out the rich tapestry of sounds. Eerie whispers, creaking staircases, shuddering pipes – the AVR-X1300W lays it all bare. Surround-channel handling is superb. Sounds pass across the back seamlessly, while non-directional ambience is rich and detailed.

Next I sampled Mad Max Fury Road – and its Dolby Atmos track is deftly handled. Naturally, height “objects” add spice and excitement as harpoons and sandstorms roar overheard, but the “regular” effects are handled with equal aplomb.

Explosions and colliding metal sound ferocious but never hard or jarring; the gruff dialogue is clearly articulated, and powerful bass integrates tightly with the other channels.

The Denon’s silky high frequencies and rich, nuanced mid-range add to the overall realism, while its expansive soundstage makes the desert landscapes seem vast. No doubt there are plenty of high-end receivers that deliver even greater muscle and insight, but for the money this is hard to beat.

Denon earned its stripes in the hi-fi world, so it comes as no surprise that the AVR-X1300W is highly musical. Bags of detail, bass notes that don’t boom or flap, natural vocals, and an uncanny sense of space and placement make for a rewarding listen.

The saxophones and keyboards in Resolution 88’s Afterglow album sound rich and full-bodied, while the vocoder harmonies in James Blake’s “Meet You In The Maze” have never sounded so layered and intricate.

Denon knocks it out the park once again with another great-value AV receiver. The AVR-X1300W boasts a wealth of features, future-proofed connections and Dolby Atmos/DTS:X support, all for a tempting price.

That would all count for nothing if it sounded dreadful, but thankfully it’s a fabulous performer, offering big dynamics, silky detail and masterful control of an Atmos/DTS:X soundstage. Do yourself a favour and give it an audition.

The AVR-X1300W improves on its predecessor with a souped-up spec, more features and stunning performance for the money.