Introduction
Audio big gun Denon is looking to hit rivals where it hurts in 2012 with a range of feature-packed but performance-driven amps. One of these is the 5.1-channel Denon AVR-1713, which sits one step up from the entry level AVR-1513 and is the cheapest model in the range to feature network functionality (AirPlay, internet radio and DLNA). Competition is fierce in the midrange market, with the Yamaha RX-V473 and Onkyo TX-NR515 already dazzling us with impressive features and performance, so let’s find out what Denon can bring to the table.

Denon AVR-1713 Design
Cosmetically, the Denon AVR-1713 has received a subtle but effective refresh. The 2012 front panel is cleaner and less busy than last year’s range, with a lower button count and improved finish. All the buttons and front connections are clustered together in the centre below the wide display panel, which has also been improved – it spells out format names and other words in a less cryptic way. The buttons (which control source and radio presets, status and dimmer) are discreetly lined up along the bottom edge of the LED panel so you hardly notice them.

In the space below are a headphone jack, HDMI input, USB port and input for the auto setup microphone. These are flanked by large dials for input selection and volume. In terms of styling, it might not make your jaw drop (few AV receivers do) but its elegant, understated black finish and compact dimensions allow it to slip into your system with minimal fuss.

Denon AVR-1713 Connectivity
On the rear panel, the Denon AVR-1713 hosts a modest array of sockets, but one that’s commensurate with the price. There are four more HDMI inputs that support 3D passthrough, ARC and CEC, which covers the standard trio of Blu-ray deck, games console and TV receiver, leaving one for future expansion.

The lack of multichannel inputs, pre-outs or zone 2 outputs might make old-school audiophiles and multi-roomers look elsewhere, but you do get two sets of analogue stereo inputs and two digital audio inputs (one coaxial, one optical). Two composite video inputs and one output, a subwoofer pre-out, FM antenna input and Ethernet complete the line-up. This network connection is crucial to many of the Denon AVR-1713’s key features.

Denon AVR-1713 Features
The Denon AVR-1713’s network functionality (AirPlay, internet radio, DLNA streaming) is one of the things that sets it apart from the cheaper Denon AVR-1513. The appearance of AirPlay on the spec sheet is a real boon. The ability to stream songs from the likes of the iPhone 5, iPad 3 or iTunes on a PC or Mac is hugely convenient and like most things Apple invents it’s very easy to use.

We tried it out and it works a treat – when you start playing a song it switches to AirPlay automatically and displays the name of the song on the front panel. Volume can be controlled from the device or the slider on the iTunes interface, as well as track skipping and other key commands.

The network connection also puts thousands of internet radio stations at your disposal through the vTuner portal, and thanks to its DLNA certification allows you to stream music from servers on your home network, with support for FLAC HD, MP3, WMA, AAC and WAV files. And with a firmware update, it’ll also stream Apple Lossless (ALAC) via DLNA and AirPlay, as well as supporting Gapless Playback, which is great when listening to live albums. You can also stream photos in JPEG format and create a slideshow with music in the background. 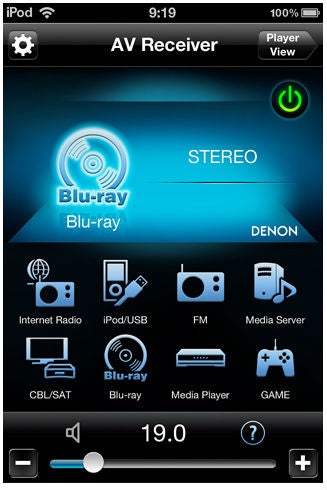 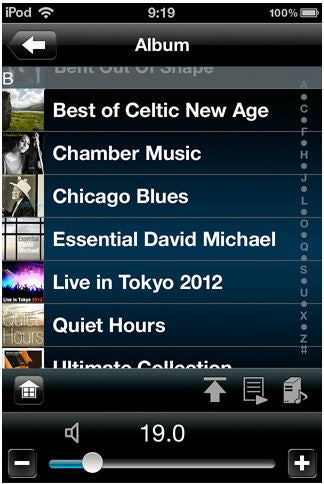 Additionally the Denon AVR-1713 provides access to Last.fm and Flickr, and with the Denon Remote App installed on your Apple or Android device such as the Samsung Galaxy S3 you can control every aspect of the Denon AVR-1713’s operating system, from basics like volume, input and surround mode to more complex stuff like web radio browsing and network streaming. It’s far more comprehensive than last year’s equivalent app.

The front USB makes a handy alternative to the network connection. You can plug in storage devices or USB hard-disks and play the same file types as above, or hook up your iPod/iPhone and play music directly using an onscreen GUI or the front panel. It’ll even charge your iPad, even though it’s not ‘Made for iPad’, plus it can now be used to upload firmware updates – useful for when you’re not hooked up to the network.

But let’s not forget that the Denon AVR-1713 is designed for home cinema first and foremost, and on that score the spec looks good. Denon’s quoted power output is 120W per channel (into 6ohms) with decoding for all the audio formats that matter (primarily Dolby True HD and DTS HD Master Audio).

You also get a wide range of Denon’s DSP modes, Cinema Equalizer (which optimises high frequencies for home cinema) and Virtual Surround. The Compressed Audio Restorer feature aims to enhance the quality of digital music formats. There’s no on board video processing though, which rules out upscaling and conversion of analogue signals for the HDMI output.

Denon AVR-1713 Operation
It’s clear that Denon has made a concerted effort to make its 2012 receivers as easy to use as possible. Firstly there’s an onscreen Setup Assistant that kicks in when you first fire it up, which sets the language and helps configure the speakers, set up inputs and connect to the network.

Along the way it also launches the Audyssey MultEQ XT auto calibration system, which uses the supplied microphone and test tones to set the size and number of speakers, the crossovers, distances, levels and polarities. Then it carries out room correction to avoid any acoustical problems, which it performs in up to eight listening positions so that the sound is optimised no matter where you sit. It takes a long time to complete though, so set aside lots of time to complete it.

Then there’s the onscreen menus, which are incredibly basic in a ZX Spectrum sort of way, but that’s possibly by design. The simple white text and blocky graphics on a black background make everything clear and easy to find, though it does feels a touch anachronistic in 2012.

Still, there’s a vast amount to play with. The main menu is broken down into Audio, Video, Inputs, Speakers, Network and General. The Speakers menu is where you can set the distances, levels and crossovers manually if you don’t trust the auto calibration system, while Audio contains the surround parameters, audio delay, volume and Audyssey settings. Despite the beginner-friendly approach, more experienced users will be more than happy with the level of control afforded by this setup menu.

The Network screen is a little more sophisticated, using colour icons against a black background, including Favourites, Internet Radio, Media Server, Last.fm and Flickr. The internet radio and Media Server menus use straightforward lists that leave little room for confusion, although it’s quite a hassle looking for specific tracks if you have a large library.

Denon has simplified the remote too, stripping back the button count from previous remotes. The direction pad and volume keys are placed centrally under the thumb for intuitive navigation, with banks of input selection buttons at the top. Having tested plenty of receivers remotes with more buttons than Cadbury’s, this is a refreshing change – it’s the sort of remote that beginners can use without getting all confused.

But if you prefer a more modern way of controlling the Denon AVR-1713, then Denon has also created a terrific app for Apple iOS and Android devices. It’s a vast improvement on last year’s version, offering several new features, such as fast scrolling of internet radio stations and DLNA servers with album art, Blu-ray player control (when hooked up via HDMI), a multi-zone control interface and a customisable home screen.

Denon AVR-1713 Performance
The Denon AVR-1713’s performance is superb, doing everything that’s asked of it with gusto. It’s certainly powerful, filling our test room when playing Super 8’s train crash scene, but there’s a finesse to its performance that puts it a cut above most entry-level amps

It doesn’t quite take the breath away, lacking the absolute transparency and poise we’ve come to expect from every Denon product, but it’s a true entertainer. The sound is composed yet exciting, and gleefully rowdy when required. It’s also rich in detail but not clinically so. Faint background noises are audible, while orchestral scores are as smooth as silk.

Effect steering is fast and confident, moving sound between speakers with terrific fluidity, plus the vast scale and width of the soundstage brings a sense of spectacle to blockbuster action scenes. There’s plenty of bass presence too – every bang and crash has satisfying heft. When the alien first tries to escape from the crashed carriage, the thump is immediate and forceful.

Then when it blows the door off, it flies through the air – steered from front to rear with admirable smoothness – before embedding itself in the ground with an almighty clang. The Denon handles it all without any signs of strain, even at loud volumes.

This, combined with effortless crispness and attack in the mid to high frequencies, makes for a thrilling listen. The only minor criticism is that after Audyssey’s calibration we found it little difficult to hear dialogue during the build up to the train crash, and had to boost the centre level a little.

The Denon AVR-1713 is as assured with music as it is with movies. We streamed Back To Black by Amy Winehouse via AirPlay (in stereo mode) and the sound is smooth and detailed, with tight, rhythmic bass notes and full-bodied drums.

Denon AVR-1713 Verdict
The Denon AVR-1713 is another impressive AV receiver from the audio giant, mixing an attractive feature set with powerful, polished performance at a decent price. There’s a generous array of network features, which includes internet radio, DLNA streaming, AirPlay and an improved remote app, plus the new design tweaks are a success.

What’s more, Denon’s efforts to make the AVR-1713 simple to use have paid off. The user interface has been purposefully stripped down to the basics, the remote is surprisingly light on buttons and Audyssey MultEQ XT demystifies the sound calibration process. This makes life easy for home cinema newcomers at whom this receiver is clearly aimed.

It’s all topped off by a stellar performance, which demonstrates Denon’s ability to play movies with chest-slamming power without compromising on detail or composure. The only things in the ‘Cons’ column are the sparse connections and a nagging sense that this isn’t Denon operating at full capacity, but it’s an impressive machine nonetheless.