Onkyo has been top dog in the AV receiver world for some time now, but last year’s TX-NR609 was a particularly stunning achievement. It melded the company’s best-ever sound quality with a truly eye-popping array of features, all for a much lower price than you might expect given the spec.

So how do you top that? The answer is you don’t. Onkyo has clearly
adhered to the ‘if it ain’t broke’ school of product development with
the Onkyo TX-NR515 and its other 2012 brethren.

They’re not exactly the same as last year, with a few new titbits to keep punters interested, but it’s more of a subtle refresh than a wholesale redesign.

This is definitely a good thing, because it means you get all the same network features and music streaming options (including Spotify), plus plenty of power in the tank and even 4K2K upscaling for the next generation of hi-def TVs.

Onkyo has also kept the external design fairly similar, again offering a choice of black or silver. Build quality is satisfying and the front panel is uncluttered, cleverly concealing the main buttonry within the grooves and ridges under the large display panel.

There are a few sockets, including HDMI, USB, composite video and setup microphone inputs, plus a headphone jack, but unlike some of Onkyo’s higher-end models, these aren’t covered up by a flap, which would have offered extra protection. The USB port can be used as a direct connection for iPods or for playing digital media.

Around the back is a healthy array of sockets including seven more HDMI inputs and two outputs, which could come in handy if you want to feed two displays at once. It also offers a Hybrid Standby mode with an HDMI passthrough function, which means you don’t have to turn it on if you just want to watch something through your TV speakers.

Four digital (two coaxial, two optical) and five analogue inputs cater for external audio equipment, while component and composite ins and outs make this a versatile video switcher. An Ethernet port lets you access the network features, but if wires aren’t your thing then Onkyo sells an optional LAN adapter that plugs into the second USB port.

Elsewhere you’ll find line and speaker-level outputs for Zone 2 use, plus not one but two subwoofer pre-outs, which will please bass-heads everywhere.

Among the new features is Mobile High-Definition Link (MHL), which allows you to watch 1080p video with 7.1 sound from mobile devices and smartphones via the front HDMI port. Once connected you can control playback using the Onkyo remote and it even charges the device while in use.

The TX-NR515’s network functionality is another stand-out feature, bringing a wealth of extra music to your living room. Premium Spotify and AUPEO!  subscribers can stream music through the dedicated portals, while Last.fm and vTuner offer internet radio access. You’ll also see German streaming service Simfy listed but it’s not yet available in the UK.  Finally you can also use MP3tunes, a ‘cloud-locker’ music service. 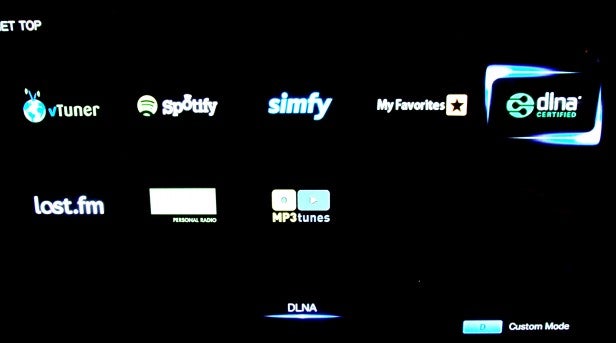 The Onkyo is also DLNA certified and can stream music from your own network servers (PCs and NAS drives for example). The list of supported formats is excellent – MP3, WMA, WMA Lossless, FLAC, WAV, Ogg Vorbis, AAC and LPCM – but if you prefer they can also be played from USB storage devices.

On the audio side Onkyo claims a power rating of 7 x 130W, and there’s a wide range of audio processing modes to play with. Dolby Pro Logic IIz is the most sophisticated of these, offering you extra front height channels if you can be bothered to rig up an extra pair of speakers at the front of the room – but that’s at the expense of surround back channels.

This is joined by a wide range of Onkyo’s own sound modes courtesy of the 32-bit DSP chip, including Theater-Dimensional Virtual Surround, four modes for gaming (rock, sports, action and RPG) and Advanced Music Optimiser for compressed audio files. Direct and Pure Audio modes shut down video circuitry in a bid to ensure the cleanest possible music playback.

The on-board Marvell QDEO technology upscales incoming video sources all the way up to 4096 x 2160 resolution, as well as cleaning up artefacts.

There are some other nifty features that boost the TX-NR515’s ease-of-use factor. InstaPrevue shows you a live video thumbnail of each source connected to the HDMI inputs, making it easier to find the right one. Onkyo’s free remote apps for Apple and Android offer a slicker, more intuitive way of controlling the receiver, while Audyssey’s 2EQ system makes sound calibration a cinch, measuring the acoustic properties of your room using the supplied microphone and tweaking its levels accordingly. It maintains these optimum settings automatically using Dynamic EQ, while Dynamic Volume keeps the output at an even level.

Operating the TX-NR515 is a generally pleasant experience. Its user-friendliness is aided greatly by the good-looking onscreen menus, which use colourful icons and funky fonts. The setup menu and other displays use logical lists and respond quickly to remote commands. The only gripe is that it’s not particularly easy to find specific tracks on a DLNA server or USB device if you boast a huge library of songs. 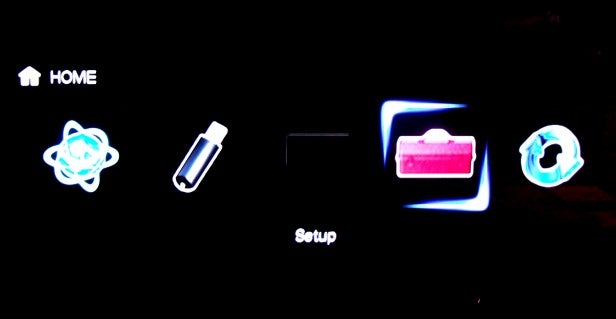 Everything can be accessed from the main Home menu’s a row of cute icons, including the full setup menu, which offers a very detailed set of sound tweaks. But for faster access to key features you can bring up the Quick menu, which is laid over whatever you’re watching.

The remote seems a little cluttered at first glance but you soon realise that all the often-used stuff is perfectly placed, like the direction pad in the middle and the playback keys below it. Input selection is easy too – simply select what you want from the cluster towards the top, and each one is clearly labelled. There’s also a row of three macro-style ‘Activities’ buttons (My Movie, My TV, My Music), which switch on the receiver and flip to the relevant input.

Performance
Although there isn’t a major step-up in quality from the TX-NR609, the TX-NR515’s performance with blockbuster Blu-rays is fantastic. What makes it so special is its ability to deliver absolutely punishing levels of power and bottom-end oomph while making everything else sound crisp and composed.

It’s this combination of grace and grunt that makes it such an irresistible proposition. It gets the pulse racing when required, but then holds your attention throughout with its meticulous detail and texture.

We tried out Super 8’s pivotal train crash scene and the Onkyo makes it a true spectacle, effortlessly conveying the excitement and drama of the scene with fiery effects, smooth, speedy steering and gut wrenching bass. There’s also a great deal of detail poking its way through, from the top-end twang of metal on metal to the crackle of fire in the aftermath.

Its sense of scale is immense, creating a soundstage that’s high, wide and spacious (even without the vertical expansion of Dolby Pro Logic IIz), yet the effects within it are accurately placed and dialogue is pinned firmly to the centre channel.

It blasts out crashes and explosions that make you cower in fear with their sheer potency without descending into a wild, harsh mess. It’s not coloured, thin or boxy – just a slick, sophisticated and powerful performer that has the talent to breathe new life into your favourite movies.

It’s also a dab hand with music, no matter what you throw at it and what you use to throw it. FLAC files from a USB stick sound pristine, regular MP3s are never less than enjoyable, and provided the broadcast is up to scratch internet radio sounds great. This sort of quality across the board makes the TX-NR515 a wonderful audio epicentre, no matter what you’re into.

Verdict
Despite its similarities to last year’s models, we can’t recommend the TX-NR515 highly enough. It’s packed with features, chief among which are a healthy range of network streaming services, backed up by fantastic sound quality, decent music format support and useful on-board audio processing.

The spec is terrific for the money, and although stuff like MHL and 4K2K upscaling aren’t exactly essential they’re a nice bonus. The operating system could use a little work, as it can be a little tricky to find music and navigate round certain areas.

But when it comes to features and core audio performance the TX-NR515 is already the AV receiver to beat in 2012.