Yamaha’s RX-V473 hails from the entry-level section of the company’s AV receiver range, sandwiched between the RX-V373 and RX-V573. Despite its status as an affordable model, the feature list looks healthy for the money, boasting network streaming support and full compatibility with Apple products (including AirPlay for the first time on a Yamaha receiver). More discerning cinephiles might like to explore two premium models further up the range, the RX-V673 and V773, but if you’re after a nice balance of features and affordability then the five-channel RX-V473 already looks like a good bet.

Design-wise it’s vintage Yamaha, clad from head to toe in a seriously sleek black finish. A large display panel shines important info into the room in clear lettering, including the currently selected input and the volume level. Fans of clean minimalist AV kit might bemoan the lack of a flap to cover up the front panel clutter, although there’s a bit of geeky pleasure to be had in all the buttons, dials and sockets peppering the fascia – a reminder that it’s the busy hub of your home cinema system.

The buttons on the front let you control the built in radio tuners, bass/treble and input selection, while four Scene buttons act like macros, powering up the unit than selecting the relevant input and DSP mode. Front sockets include 3.5mm minijack and composite video inputs, headphone output and a socket for the supplied setup microphone (more on that later).

The rear panel is nicely stocked with sockets, including four HDMI inputs with support for 3D, ARC and even 4K2K passthrough when such devices come to market. Also useful is that you can switch between sources connected to the HDMI ports while in standby.

The key advantage this Yamaha RX-V473 model has over the entry-level RX-V373 is the inclusion of DLNA network functionality. This allows you to stream music from sources on your home network without having to hook up cables or plug in USB devices. It’ll read content from PCs and NAS drives and stream internet radio, with format support that includes FLAC 96/24, WAV, MP3, WMA and MPEG-4 AAC. Meanwhile the inclusion of AirPlay functionality makes it easy for you to stream music from iPods, iPads and iPhones, or from Macs and PCs running iTunes.

But it’s not just about streaming music – the network connection also lets you control the Yamaha RX-V473 using a smart phone or tablet running Yamaha’s AV Controller App, available for Apple and Android. This app also features MusicPlay, another method of streaming your tunes.

If you’re not ready for the network revolution, no sweat – the RX-V473 also allows you to connect Apple devices directly to the front USB port. This direct connection ensures clean, undistorted data transfer, plus you can control music playback using the receiver’s remote. The RX-V373 supports iPod and iPhone only but the Yamaha RX-V473 also supports iPad. The USB port also supports media playback from USB memory devices and MP3 players.

True to form Yamaha has loaded the RX-V473 with digital sound modes, chief among which is CINEMA DSP 3D, which attempts to expand the sound to match the height of the sonic image to provide a more realistic and immersive sound field.

It’s backed up by Virtual Presence Speaker, which adds phantom speakers to make the soundstage seem more three-dimensional. Compressed Music Enhancer aims to boost the quality of MP3 and other digital music formats, plus there are 17 DSP modes for movies and music with exciting sounding names like Adventure, Spectacle and Sci-Fi, while on the music side they have names like Hall In Munich, Cellar Club and The Roxy Theater.

The RX-V473 also boasts an automatic setup mode called YPAO, which optimises the sound according to the characteristics of your room. Plug the setup mic into the front port, and it analyses the room acoustics using test tones and sets the audio parameters for you.

For all setup matters, the RX-V473 gives you the choice of using the front display panel or the onscreen system. The latter is the easier to use, although its graphics are rudimentary (the RX-V673 and 773 offer a better more sophisticated design). It lays out the options in a very straightforward manner – the GUI is basically two boxes at the top of the screen, one showing the categories (Speaker, HDMI, Sound, Network and so on), the other showing the submenu. It works well, except the screen disappears momentarily when you move between options, which is a tad annoying.

If offers a pleasing level of manual optimisation tools, including distance, level, equaliser, crossover and phase management. There’s also a new subwoofer trim setting, which according to Yamaha enhances bass output and cleanly separates the bass frequencies. This avoids overlap with the front speakers and create a cleaner and more focused sound.

Most of the network functionality works smoothly, even on our slightly convoluted setup that involves hooking up the RX-V473 via Ethernet to a Homeplug and pulling music from a laptop connected wirelessly to the network. Internet radio throws up a vast array of stations – we tried a few at random and they started streaming instantly. The AirPlay logo popped up in iTunes after a couple of minutes, and the Yamaha played tunes from our laptop without batting an eyelid. It even switches over to AirPlay from another source when it detects a tune being played.

However we did have trouble getting it to play ball with Windows Media Player. The Server menu read ‘No Content’ despite all the settings appearing to be correct on the server, the receiver and the software.

Still, USB playback works a treat and so does direct USB playback from iPod and iPad.  The onscreen menus during music playback lack sophistication, using rudimentary graphics, and as a result feel incongruous with today’s flashy smartphone GUIs – but at least they’re clear and informative.

With the remote Yamaha makes the mistake of trying to cram as many buttons onto it as possible. Experienced users won’t be troubled by this but newbies might feel daunted by the barrage of buttons. They’re all tiny, which in turn makes the labelling difficult to read, and the cluttered layout doesn’t make navigation feel particularly intuitive. On the plus side there are dedicated Scene buttons and the important volume controls are easy to spot.

For such an affordable receiver the RX-V473 delivers a surprisingly commanding performance, injecting Blu-ray soundtracks with pace and punch, dragging out plenty of fine detail and keeping everything composed. 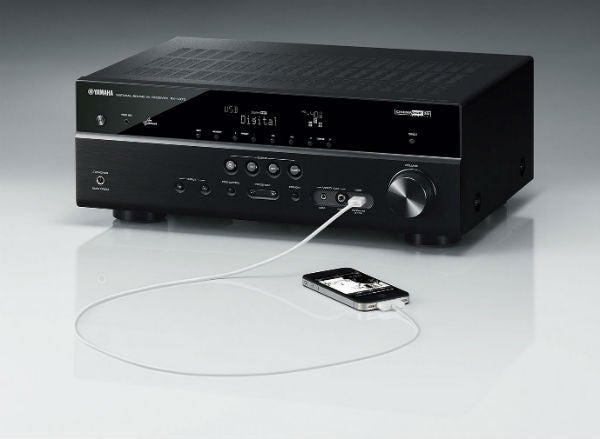 Fed with a busy, boisterous action scene like Super 8’s stunning train crash, the Yamaha orchestrates the effects with confidence and thrilling energy. It’s a gorgeous combination of the brutal and the beautiful, following up a pummelling explosion with gently crackling fire effects so lucid you can almost feel the heat coming from the speakers.

It maps out its wide, immersive multichannel soundstage with crisp effects from every channel, whipping them from speaker to speaker with swiftness and precision. Dialogue is locked to the centre channel, spraying out words with pleasing clarity and depth, while top-end detail flits and scuttles between the rear channels, augmenting the tension in the build up to the big crash.

It can go super loud with few ill effects, dishing out dramatic action beats without getting too shouty and fatiguing as some budget amps are wont to do. Low frequencies stay tight and focused. Moving further into Super 8, its many jumpy bits are nicely handled – the jolting thump of sudden alien attacks sound fast and punchy, demonstrating how well the Yamaha handles dynamic shifts.

When streaming tracks from AirPlay, the RX-V473 shows off its musical chops, handling jazzy, acoustic soul from the likes of Amy Winehouse and Lianne La Havas with a bouncy, airy feel. It keeping rhythms tight and articulates vocals with a warm tone. It’s an impressive performance for the money.

Verdict
The jury’s still out on the RX-V473 until we hear how it compares with the Onkyo TX-NR515 (review coming soon) and this year’s midrange Denons. But on its own merits the RX-V473 delivers a smooth, exciting and articulate performance that didn’t blow us away, but certainly ticked all the boxes.

This excellent value is boosted further by its wide range of features, primarily AirPlay support, DLNA and internet radio, which turn it into a versatile music streaming hub. USB support for iPods and storage devices are further strings to its bow, while the inclusion of YPAO will be music to the ears of newbies.

Where it falls down is in user-friendliness – the onscreen menus are rudimentary, the remote is cluttered and we couldn’t get DLNA streaming to work for no obvious reason. But in terms of sound quality and features Yamaha’s RX-V473 is a pleasing purchase.