The Venue Pro 8 packs an 4,830mAh battery that Dell says gives the 8-inch tablet up to 9.9 hours battery life, effectively putting into the iPad mini 2 Retina realms of battery life. In our testing it’s less than that, but not by much. Getting 8 hours and 30 minutes is more accurate if you are using it sporadically during the day and you don’t have the brightness cranked up, which in most cases is necesssary because the default brigtness setting is set so low.

Using it more sporadically during the day to do some gaming, browse the
internet and stream video it does make it through a day, though you will
want want the charger by your bedside to power it up for the morning
just to be on the safe side.

In more intensive testing running an entire series on Netflix it manages closer to 7 hours 30 minutes, so it’s not quite the 9-10 hour battery life of the iPad mini 2 Retina. It does match the Toshiba Encore and shows that the Intel Atom Bay Trail-powered tablets are able to go the distance. 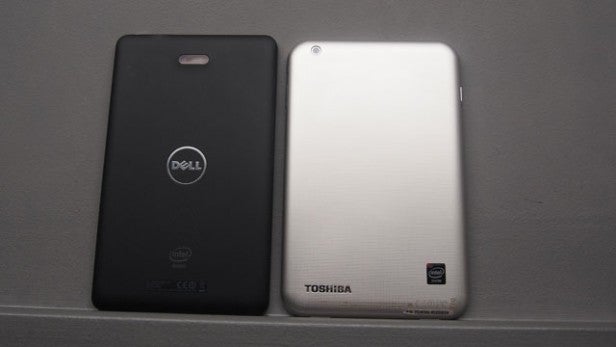 Should I buy the Dell Venue Pro 8?

If you are intent on buying a 8-inch, Windows 8.1 tablet then the Dell Venue Pro 8 is currently the best one out there. It’s comfortable to use, has a nice, bright display, the battery life really impresses and general performance is very good. For £250, it represents great value for money as a standalone tablet you are going to use for everyday tasks.

We still have our niggling issues most of which are levelled at the operating system more than anything else. Until Microsoft sort out scaling issues for the traditional desktop mode, Microsoft Office is difficult to use without an additional keyboard. That means investing more pushing the price closer to £300 if you go for Dell’s official option.

The only serious issue in comparison to other 8-inch Windows 8 tablets is the lack of any physical video output. That means you’re totally reliant on Miracast, which though a promising technology does limit your options a little. If you want to use the Venue Pro 8 as a kind of desktop docking tablet then you may find this tricky.

Looking at other alternatives, for less money you can buy the Nexus 7, which does offer a better display, overall performance and a whole lot more apps to choose from among other things. The iPad mini 2 Retina is still comfortably the best tablet out there, but you are going to have to pay over £300 to own one.

This is only really the beginning of the onslaught of smaller Windows tablets so we are not suggesting this is the one to rival Apple and Google’s slates just yet. It does get a lot of things right and certainly does a better job of showcasing Windows 8.1 in smaller, more portable body than what we’ve seen so far.

This is by far the best 8-inch Windows 8.1 tablet we’ve seen it’s just a shame that Microsoft’s operating system is not yet fully equipped for a smaller screen.