While the Super X-FI holographic audio is interesting technology, and the SXFI Airs make a good case for it, the results don't quite meet up to Creative's aspirations for it. Nonetheless, it works well in some contexts, offering an immersive performance

The Creative SXFI Air are the first headphones to feature built-in support for Super X-Fi technology. Super X-Fi is Creative’s take on holographic audio, a technology that turns stereo sound into a 3D-like audio experience.

And the SXFI Air’s talents aren’t restricted to just holographic audio. These are headphones with a fairly comprehensive suite of features that includes playing music over Bluetooth, USB and from a microSD card.

The SXFI Air come with grand ambitions of breaking the mould of conventional headphone listening. Are they a case of the Emperor’s New Clothes, or can they deliver on their promise? Let’s find out.

The SXFI are portable over-ears that at the time of review had a price of £149/$159/€159/AUD$255. They drop in price fairly regularly, dropping to almost half their RRP.

If you’re looking for a set of headphones that don’t draw attention, the SXFI Airs are not that.

These are big, closed-back over-ear headphones – and at 338g they’re fairly heavy. Their size and weight affects portability; there’s no carry case and there’s no option to swivel the ear cups or fold them in. While you can wear them on your travels, they have the look and feel of a headphone more intended for home use. 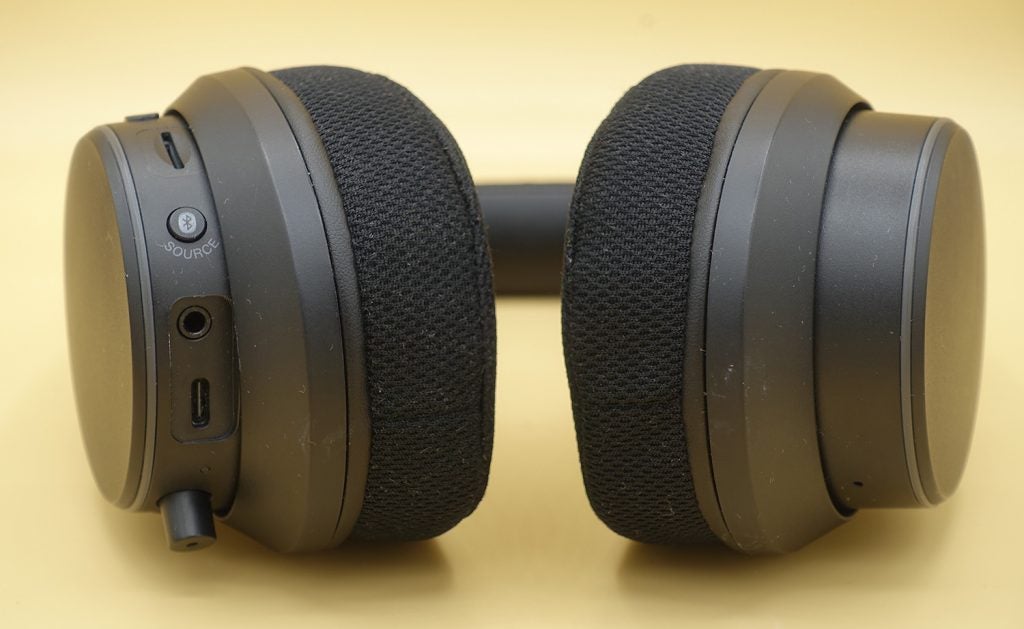 The ear pads are made from a breathable memory foam fabric that allows heat to dissipate. It works well enough, although the feel of the fabric did make me want to scratch my ears every now and then. Nevertheless, the SXFI Airs prove to be a cushy and comfortable pair of headphones.

They’re are also a little loose in terms of fit – intentionally, so to avoid the clamping force that headphones can produce – but not enough to give you cause that they’ll slip off.

There’s a choice of black and white finishes, and while the white finish looks cleaner, I’m partial to the black version. Either way, they’re a nice-looking pair of headphones, if on the big side.

Battery life is quoted at 10 hours – which, again, emphasises the Airs lack of portability. Active noise cancellation isn’t included, but noise isolation is good enough with the size of the ear pads a great contributor to blocking sounds. There were multiple times where I found it hard to fathom what someone was saying – that’s a plus in my book.

Both ear cups feature an RGB colour ring, and it changes colour depending on use. Turn the headphones on and it flashes green; power them down and it flashes red; in use the ring is blue. You can customise the colours to the tune of 16 million different options through the SXFI Control app, which sounds exhaustive. The wearer won’t notice the colours, but as a fashion statement it makes them a bit funky and vibrant. 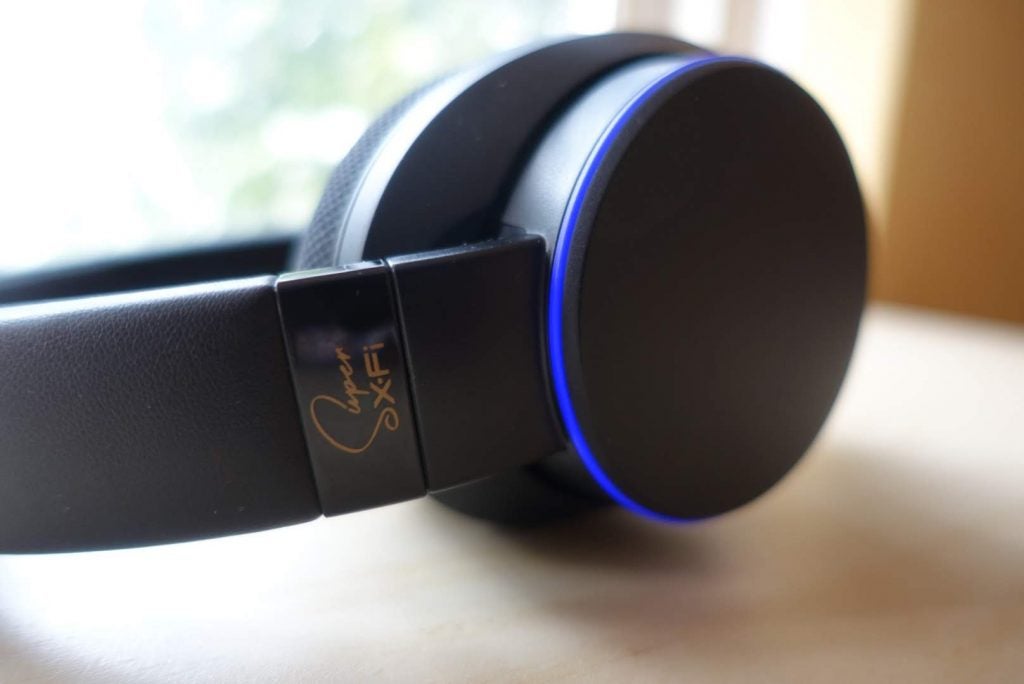 Aside from the implementation of Super X-FI, what stands out most is the SXFI Air’s versatility. The left ear cup is home to a variety of buttons that includes a microSD slot and a source button for switching between Bluetooth (4.2), USB and microSD playback. There’s also a 3.5mm jack for a wired connection and a USB port for charging and the Super X-FI button − more on that later.

On the left ear cup are touch capacitive buttons similar to those on Sony’s WH-1000XM3. You can swipe right or left to skip tracks, or adjust the volume by swiping from the top or bottom. It’s smooth and responsive, although it would be nice if there was some sort of indication to let you know if the swipe registered or not.

If you’re into video games then the SXFI Airs are compatible with most gaming consoles including Nintendo Switch, PS4, as well as Windows and Mac platforms.

Setting up the SXFI Air can be an involved process. First, you need to download the SXFI app – available on both Google Play and the Apple Store. Next, you need to create an account and then connect the headphones to the app.

Through the app you have the ability to create a personalised sound for Super X-FI via its head-mapping feature, which takes pictures of your ears and head. It’s better to ask someone else to take the photos as it’s tricky to do it yourself. Once done, your personal audio profile is in the cloud and ready to be downloaded for use on other devices. 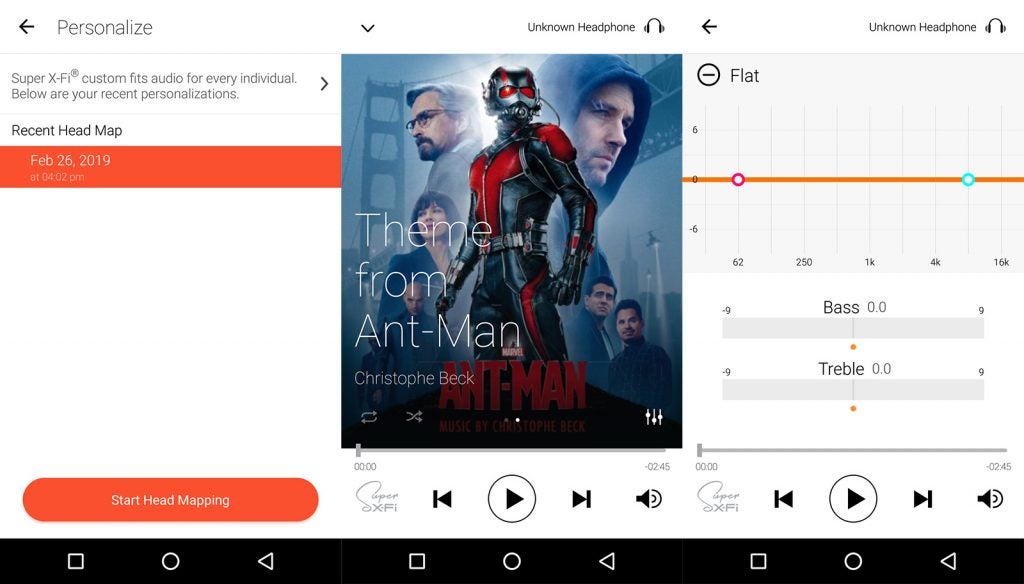 You can access your music library through the app, fiddle with the equalizer settings, or select another compatible headphone for use. There’s a decent range of brands supported that includes the (original) Apple AirPods, Bose QC35 II and Sennheiser Momentums.

Pairing via Bluetooth was temperamental at times. Three tries were needed to connect an iPod Touch, but the SXFI Airs recognised my iPad straight away. And while it took a few goes to set up on my Android smartphone, connecting on another’s proved tricky with the headphones unable to do so with any success.

Creative has pushed the SXFI Air headphones as not only being good for transforming your music, but movies and games and any other content you enjoy. The purpose behind holographic audio is to render what you hear as natural, as it would sound in the world around you. The traditional presentation of left and right channels gives way to audio being around you, full of space and depth.

And it’s to the SXFI Airs credit that after playing all manner of audio content there were times I couldn’t tell if I preferred a more traditional audio experience or the Super X-FI. It really depends on the type of content to which you’re listening. 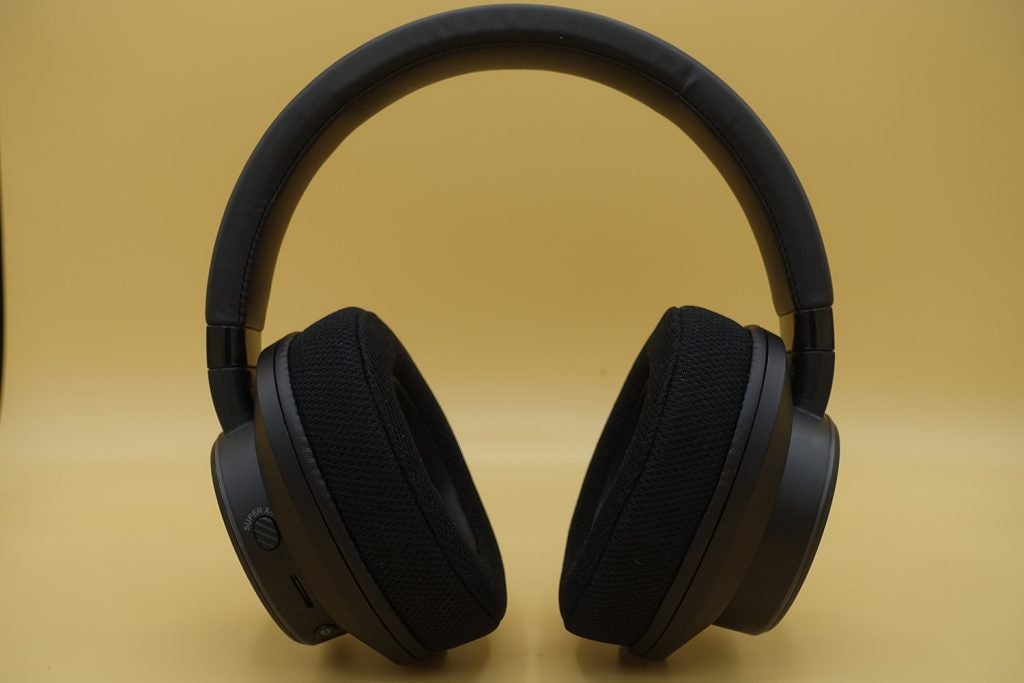 Try podcasts, for example. Flick the Super X-FI on and there’s a commendable sense of height and space in the presentation. However, there’s an echoey feel – much like being in a stadium – that isn’t welcome. If the quality of the podcast is poor, artefacts are accentuated.

Jump to a Netflix stream of Batman vs Superman (not our favourite DCEU movie) on an iPad, as Batman in his suit of armour takes on the Man of Steel, and there’s more bass to Affleck’s distorted voice, and the action sounds bigger and weightier. However, there’s less subtlety to be found in the mix. Listen to it as you normally would and while it isn’t as appreciably as big a soundstage, there’s a better balance of sound effects, music and dialogue.

The same can be said of the tech’s application to video games, where the placement of sounds in Monster Hunter World was more 3D in nature, but there’s a thickness to the presentation that gets in the way of clarity. Despite that, the SXFI Air headphones produce a good performance when used as a standard gaming headset.

There’s also a lack of detail in Super X-FI mode. Watching a YouTube video of an F1 car, the gearshifts and the scratching of the floorboard as the vehicle speeds along the track is muffled, as if upmixing to holographic audio is at the expense of fine detail. 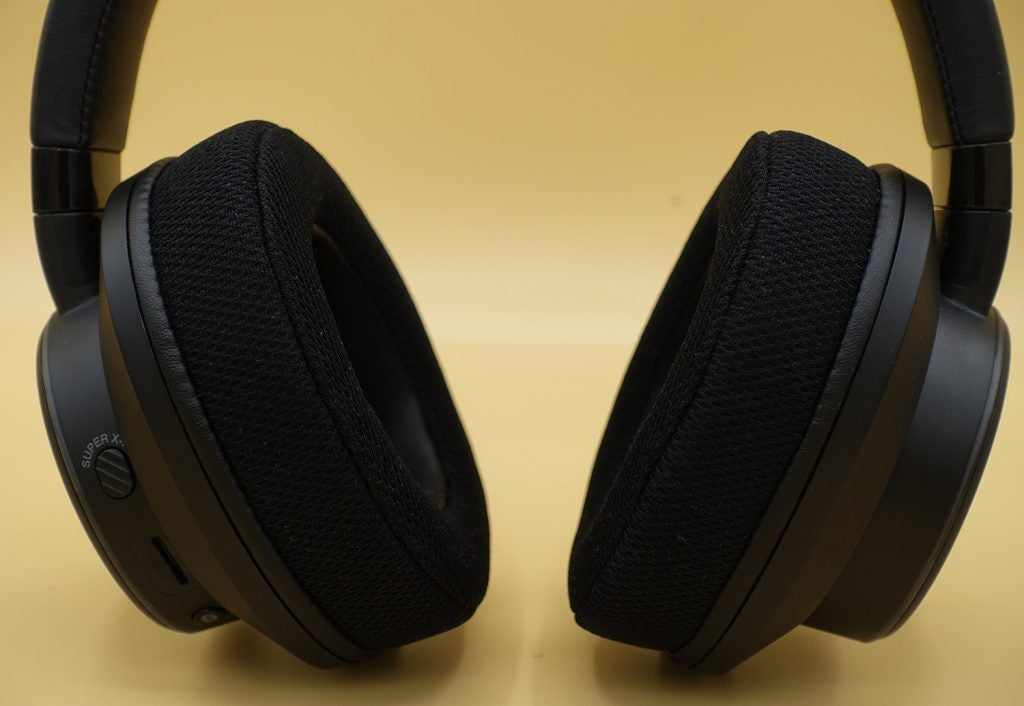 Play Audioslave’s “Show Me How To Live” and the Super X-FI robs Chris Cornell’s vocals of intimacy and immediacy. Again, the Super X-FI works in expanding the soundstage – you can sense where instruments are – but the stereo mix is more direct.

Pick any track in mono channel (there are plenty on YouTube) and this is where the Super X-FI shows off its potential. The audio comes alive and the sense of depth, clarity and imaging is fantastic and engaging.

Despite the ups and downs of the Super X-FI, these Creative headphones sound big and powerful when used in a traditional sense. “Forge” from Alan Silvestri’s Infinity War soundtrack offers a great sense of dynamics, keeping up with the various shifts in tempo, while the bass in Massive Attack’s “Angel” is solid, with the stereo imaging enveloping you. Wired performance is better than Bluetooth, which is a little soft in comparison.

Play a DVD – in this case the opening bank heist from The Dark Knight on a laptop – without Super X-FI and the presentation is wide and expansive. You’ll need to download the Super X-FI app to your PC or Mac and be in the right playback mode (I chose 5.1); the soundtrack grabs your attention. It isn’t quite as smooth but there’s detail in abundance and no shortage of heft when guns go off in that sequence.

The Super X-Fi works, although it doesn’t work as well with every piece of audio I played through these headphones. Listening to audio in the traditional sense produced a more direct presentation, with a better sense of clarity. While I enjoyed the enlarged soundstage and depth that the Super X-FI tech brought at times, the fidelity of the experience didn’t always ring true. It can work well in some contexts, but in others it falls short.

You should buy the Creative SXFI Air if…

Used in a traditional sense, the SXFI Air are great-sounding headphones with a big and powerful performance. And their versatility means they can be used across a wide range of activities.

The Holographic audio (once set-up) works and… doesn’t work. It’s fair to say some music suits it better than others.

The SXFI Air are compatible with Switch, PS4, Windows and Mac, so they’re good to go for gaming.

You shouldn’t buy the Creative SXFI Air if…

They’re big, can’t fold and only have 10 hours of battery. They’re not the most portable wireless headphone.

As an attempt to bring holographic audio to headphones, the SXFI Airs are a decent attempt –  although they’re not entirely successful. Stereo still produces a better performance.

It’s quite hard to take pictures of your head for the head-mapping feature yourself. You’ll need another person to help out.