What is the Creative Sound Blaster EVO ZxR?

The Creative Sound Blaster EVO ZxR is an over-ear gaming headset that is designed to work just like a standard pair of wireless Bluetooth headphones.

At £229, they’re at the expensive end of the gaming headset scale but for the money you do get impressive sound quality, plenty of connectivity and it plays nice with the PS4. 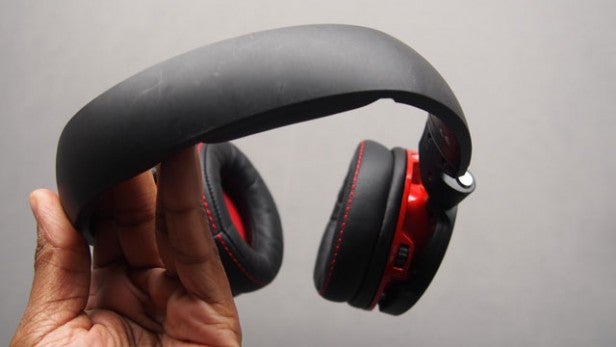 Gaming headsets are not renowned for their sleek, stylish looks and while Creative have pitched these as a headphones for all occasions, we wouldn’t want to wear these out in public.

Opting against an all black look, the ZxRs break up the predominantly plastic, matte black body with a glossy red finish that lacks the kind of high-grade aesthetic we’d hope to find on a £200 headset. It’s nicer looking compared to other gaming headsets, but on the tube it’s going to feel like you’ve forgotten to take them off after playing Titanfall. Our issue is more directed at the sizeable ear cups that are guaranteed to give you that Princess Leia look.

We can’t really fault its solid, durable construction but it feels like Creative has got caught in two minds trying to appeal to everyone and doesn’t quite strike the right balance. 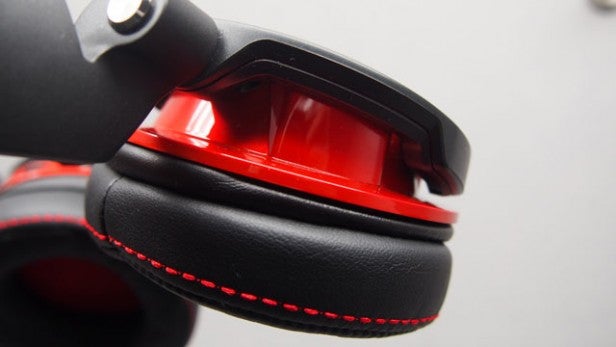 For gaming at least, they are primed for mammoth gaming sessions. The big ear cushions are soft, snug and fully surround the ears to help keep all of that sound in one place. The squishy padding underneath the headband provides a nice and secure fit and there’s very little chance these are going to slipping and sliding all over the place. Using them for two-three hour sessions, the ZxRs don’t get particularly sticky or sweaty which can often be the case with headsets.

There’s a pretty comprehensive collection of controls and buttons all of which are situated on the right side of the headset. The outer of the earcup is clickable to activate Bluetooth syncing, answer calls and is your tapping surface for connecting an NFC-enabled smartphone like the Nexus 5.

Dotted around the clickable surface you’ll find buttons to skip forward/back through tracks, switch on ANC (Active Noise Cancellation), TT (Talkthrough) to silence music or game audio and the on/off button that also doubles as the SBX sound mode. 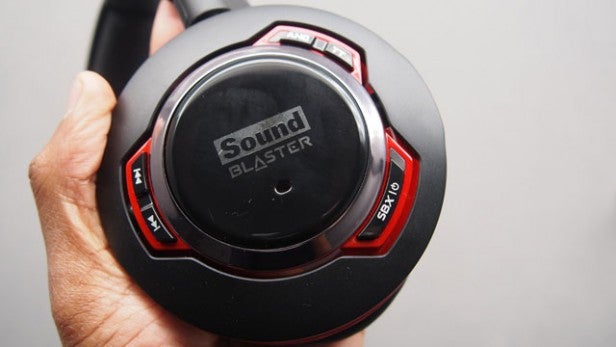 Additionally, there’s a jog dial-style volume control, a micro USB charging port, 3.5mm headphone jack and the dual microphones are built in into the earcup so it’s not poking out from one of the ear cups. The layout is good and you’ll quickly get used to where each button is so you can make accurate adjustments while fragging.

In the box, there are cables aplenty. To take care of charging you’ve got a USB to microUSB that can also be hooked into a USB soundcard for PC gamers to utilize the virtual 7.1 surround sound. Creative also includes a 3.5mm headphone cable, a 3.5mm splitter to share the sound with a friend and even includes a plane adaptor all of which can be stored in the accompanying velcro-secured case that’s compact enough to slip into a bag.

Creative’s SBX Pro Studio is definitely the most interesting aspect of the ZxRs. Essentially this is the company’s own proprietary technology that aims to improve the quality of compressed audio. The chief benefits are generating a deep bassy sound, the ability to increase the volume of vocals in films, boost the clarity and help offer a more refined surround sound experience.

This can be activated by the SBX button on the headset or through the Creative Sound app which is available for free on both Android and iPhone. Once you’ve connect the headset to your phone, the app let’s you monitor headset battery life, enhance call quality and customize the sound quality through the equalizer. It’s much easier though to select from the preset Music, Gaming or Movie SBX profiles to take the hassle out of fiddling with settings. 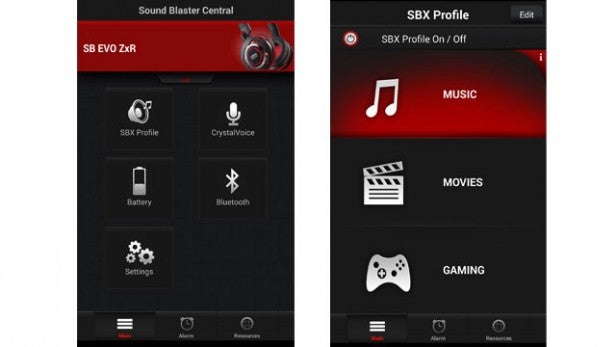 The current state of play regarding connecting wireless gaming headsets to the PS4 is that you won;t be able to use ones that worked with the PS3. Sony has since added wireless support for its own first party headsets that require a USB dongle to go wire-free. Fortunately the ZxR do still work and while you won’t get the 7.1 surround sound experience, you can plug it into the headset jack on the DualShock 4 controller. Then you simply need to hold down the PlayStation home button and choose to adjust devices where you’ll now be able to select whether to use it for Chat Audio or All Audio. 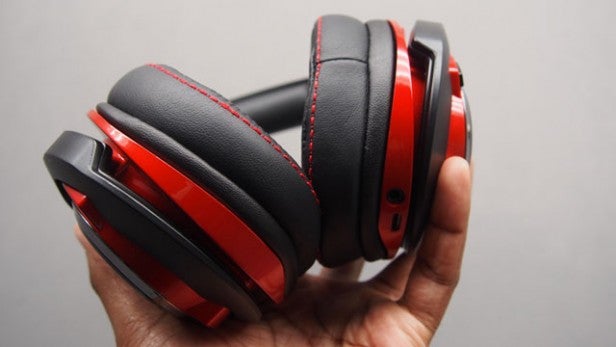 These are of course primed for PC and Mac gaming and thanks to the integrated sound card you can achieve virtual 7.1 surround sound to get that greater sense of direction and depth. To use it, you will need to connect via the USB to the laptop or desktop computer.

All of the features including the active noise cancellation, Bluetooth and SBX mode require power and Creative claims you can expect up to eight hours of battery life. Inevitably, with the ANC and SBX modes turned on it does take its toll on the battery. You’ll comfortably get through 2-3 hours a day for a week and with those modes switched off it will go for much longer. It takes around five hours to get it fully recharged again if you’re totally out of juice. 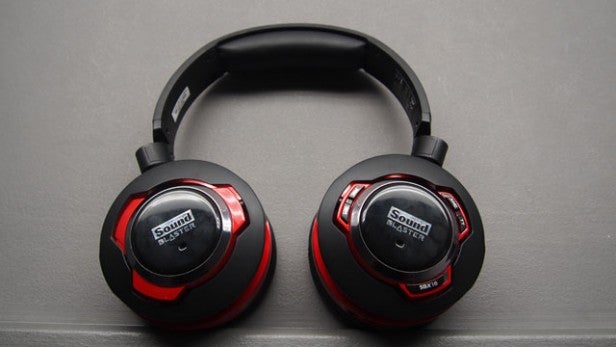 The ZxR uses large 50mm drivers that deliver undeniably powerful, bassy sound. The only problem is that comes at the expense of the detail at loud volumes especially for music playback. That is until you switch on the SBX mode or select the right profile in the Sound Blaster app. The difference is night and day. It’s still bassy but things are more evenly balanced. There’s greater definition and clarity with the kind of warm refined sound you’d expect from an expensive pair of headphones.

The separate SBX profiles really work and the qualities that the audio processing promises really shine through. For gaming, we played Battlefield 4 and FIFA 14 on the PS4 and the results are fantastic. The gunfire produces a satisfying thud and the wide soundstage is perfect for the more frenzied periods of gameplay. The usually drowned out crowd noises on FIFA come out nice and clear letting you pick out the chants with ease.

It’s much of the same for watching films or listening to music. Testing out Thor and Captain America on Netflix, the vocals really do come to the forefront and still creates that nice wide soundstage to enhance the overall quality. Streaming Spotify from the Nexus 5 emphasises the bassm, which isn’t going to be for everyone and the EVO ZxRs do have a habit of leaking a lot of sound so if you are going to use them, you’d be best using them in isolation. 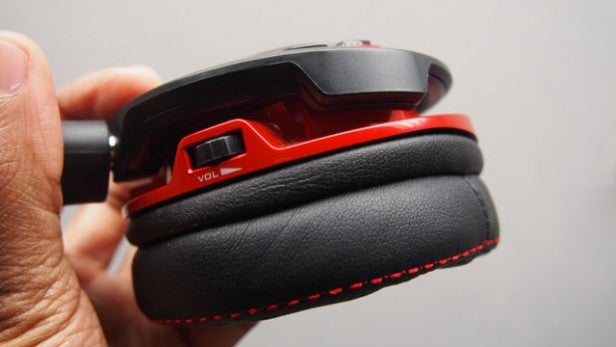 Active noise cancellation and Bluetooth streaming also impress. There’s very little signs of the hissing you sometimes get with noise cancelling headphones and in noisy environments it blocks sound well. Like-wise, streaming music over Bluetooth doesn’t suffer from any notable dropouts or inteference although on a few occasions we did have some issues syncing to a tablet.

For multiplayer gamers this perhaps the most important feature of gaming headset and the good news is that this is something the ZxRs really excel at. Creative uses dual microphones that are hidden beneath the earcups and its ‘CrystalVoice’ technologies aim to make sure your voice is heard above everything else.

Putting it to the test with Battlefield 4 and FIFA 14, barking orders or banter comes out loud, clear and precise. We even ran some music running in the background and in a co-op match in FIFA, our teammate did not pick up the potentially intrusive ambient sound. 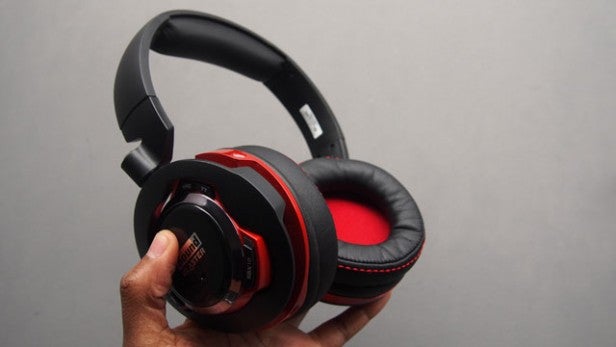 The Creative Sound Blaster ZxR headset are expensive but it’s difficult to fault them in the areas where it really matters. They are comfortable to wear, offer great versatility and most importantly sound fantastic.

If you have more than £200 to spend on a gaming headset these will not disappoint. We just wouldn’t wear them outside of the house.