Platforms: Xbox One and PS4 (Played on both)

FIFA 14 is a PS4 and Xbox One launch game that falls firmly into the ‘I’ve got it on my Xbox 360/PS3, do I really need another copy?’ category. It’s a fair point, especially if you are a PS4 owner thinking of buying a digital version from the PlayStation Store (Don’t basically, it costs £62.99).

If you do make the step up, you will be happy to hear that online stats and Ultimate Teams will stay intact, though perhaps less pleased to hear the Be a Pro and FIFA Interactive World Cup game modes get the boot for the next-gen version.

Any progress made on Career mode will be left behind as well. Although, depending on how many hours you’ve sunk in there will be some compensation in the form of extra money to go into the transfer kitty or a top scout for the season to kickstart next gen careers.

Watch the FIFA 14 Xbox One and PS4 trailer

Xbox One owners and Ultimate Team lovers will also get exclusive access to Ultimate Team Legends with a roster of 40 classic players to put alongside Messi and Ronaldo. Just think of that three pronged attack of Pele, Van Basten and er, Robbie Fowler.

The real differences are on the pitch and once you play FIFA 14 on an Xbox One or PS4, going back to it on the Xbox 360 and PS3 is a bit like stepping down to play in the Championship. First and foremost, FIFA 14 looks beautiful in 1080p HD. From the stadiums, new-look replays, game menus and players. The slick, sharp visuals are everywhere you look.

The EA Ignite game engine is a big reason why it looks and plays so differently. EA is using it across its next-gen sports titles and while the changes won’t be immediately noticeable to most, two or three matches in you’ll begin to appreciate how the Ignite engine is making use of the extra hardware power. The nitty gritty is that with the Ignite engine on board, FIFA 14 on next-gen consoles can deliver more detailed animations, smarter player AI, improved stadium atmospheres and crowds that look less like cardboard cut-outs. 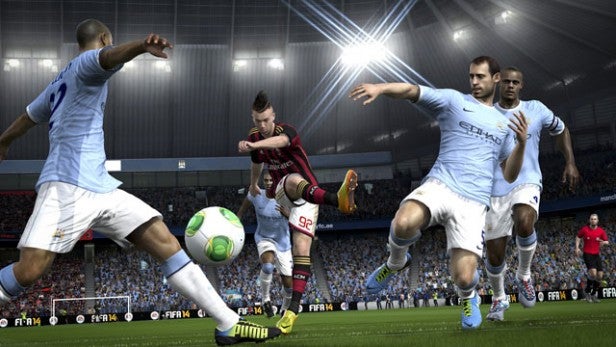 EA Sports has spoken a great deal about next-gen versions being able to ‘tell the story’ far better than current gen consoles, and that’s entirely what comes across. With shorter loading times and less breaks in play, matches run much more fluently. There’s no stalling when substitutions are being made. At throw-ins, players run to get the ball or get tossed the ball by the ballboy to keep the game flowing. Ultimately, there’s no real need to frantically press buttons to try and get on with the game and that can only be a good thing.

The fluency filters into the gameplay as well. The emphasis is still on the slower, more patient style of football, but players now move around the luscious-looking pitches in a more natural and lifelike way. Even the ball rolls nicely to a nearby teammate when you make a pass or skid across the finely manicured turf when you drill a pass.

Variable passing and shooting is more noticeable as well. It’s clearer to see when players strike the ball with the outside of the boot to make passes or make quick one-touch moves when forced into tight areas of the pitch. The impact engine really plays its part to create show off more of the pushing and shirt-tugging. It does mean, however, referees have a greater tendency to blow up for free-kicks because of it. 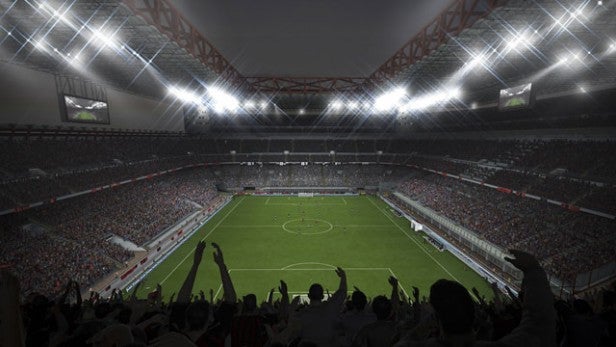 The stadium environment has also been improved thanks to the introduction of 3D crowds. We’ve had to put up with the lifeless looking supporters in the stands for a long time and while there’s no risk of a pitch invasion or coins being thrown onto the pitch, the crowd atomsphere has a much more ‘broadcast’ feel to it. Supporters now react to action on the pitch. If one of your players is hacked down, fans will roar with disapproval at the clumsy tackle. If you are 5-0 up, they will be in good voice.

Most will, of course, be investing a large portion of match time in the online realms where you once again run the risk of more Barcelona and Real Madrid beatings. We jumped onto Xbox Live to test online matches and clearly there are still some issues to sort out. Before we could even get our online season session up and running, there were error messages telling us that ‘squad file does not match that of your opponent’ and requests to delete online squad files. By resetting to default squads we were finally able to play online and it was normal service resumed with nothing out of the ordinary to report.

FIFA 14 is the most beautiful instalment of the series yet and Xbox One and PS4 owners will not regret spending again to make the upgrade.