Crackdown 3 can be great fun, but the open-world genre has come on leaps and bounds in the past decade, and this feels firmly stuck in the past.

Crackdown 3 has embarked on an interesting journey since it was first revealed almost five years ago. What began as a hugely ambitious experiment for the Xbox One’s cloud technology is now a traditional open-world venture that doesn’t push any boundaries, content with the formula it first helped to introduce back in 2007.

Sumo Digital has tried its best with what has clearly been a tumultuous project, resulting in a competent yet ultimately underwhelming chapter in The Agency’s mission to overthrow tyranny. There isn’t anything here that hasn’t been done before, both in and outside the Crackdown universe. I was left feeling underwhelmed, fawning for what could have been a much-needed jewel in Microsoft’s exclusive library.

That isn’t to say Crackdown 3 isn’t without merit. Pouncing across rooftops collecting orbs remains a bountiful joy, and it will take some time for you to grow tired of hurling tanks at enemies and watching endless explosions spread across the world like dominoes. But in a world where the genre has long since matured, Crackdown 3 doesn’t do enough to keep up. 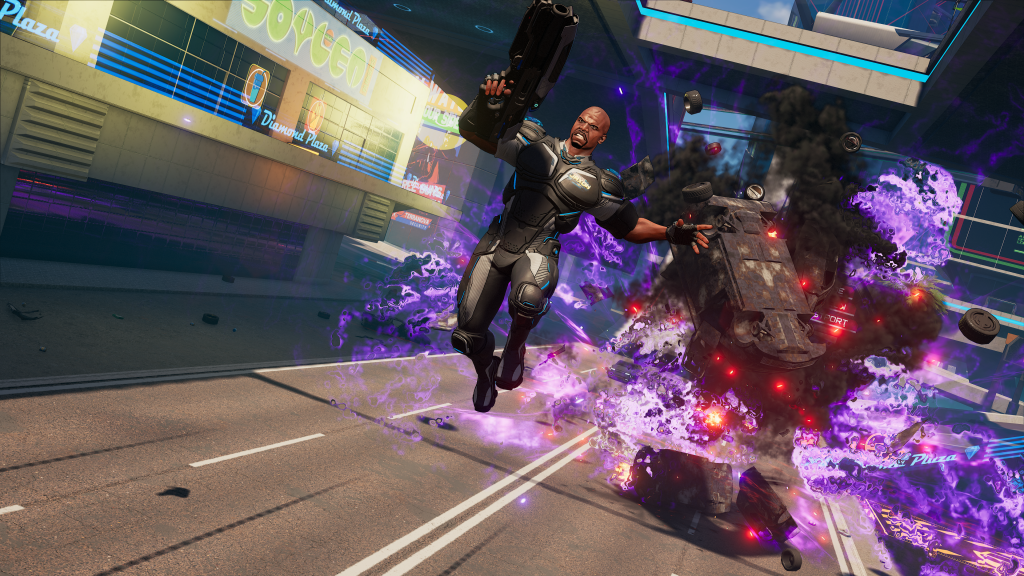 Terry Crews is one of the undeniable highlights of Crackdown 3

Crackdown 3 begins with Terry Crews giving a rousing speech to fellow agents as they fly toward the dystopian city of New Providence. Their mission is to bring down the TerraNova Corporation, a laughably sinister entity determined to bring down humanity just for the hell of it. Out of nowhere, all of our super-powered agents are killed in a surprise attack.

Left for dead, you’re one of the few agents to be resurrected and entrusted with bringing down the big bad. However, you start with nothing more than a pistol and the ability to jump over a small garden fence. Not for long, however. Within seconds you’re bounding across rooftops, hoovering up collectibles to upgrade your arsenal. The gameplay loop becomes apparent in the first 30 minutes, and doesn’t really change for Crackdown 3’s entirety.

After gaining access to the world map, it’s all about chasing icons and completing activities that immediately begin to repeat. You’ll be destroying chemical facilities, freeing imprisoned citizens or even climbing Propaganda Towers to prevent TerraNova’s message from corrupting the populace. There’s abundant variety here, but not enough to last the 8-10-hour run-time.

Propaganda Towers are one of my personal favourites. These deviously creative platforming challenges have you climbing a series of moving platforms to reach the top. A handsome reward of experience awaits you, although the mere act of reaching the objective is a sweet enough treat. A generous checkpoint system also supersedes the frustration of falling to your death right before reaching the peak. 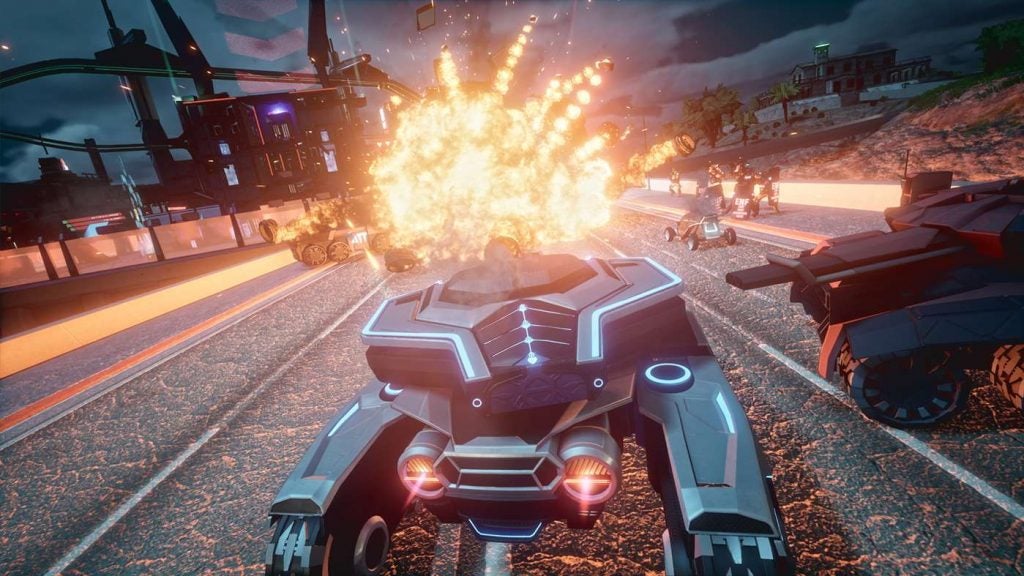 Combat is a hectic mixture of raining bullets and melee-focused superpowers as you strafe around a range of enemies. Infantry soldiers are trivial to defeat, while rocket troopers will often shield themselves with a devious shield. Later areas see the emergence of colossal mechs hurling cars, boulders and other awful things at you with reckless abandon.

With so much colourful mayhem being thrown around, you’d expect it to pose some form of challenge, right? Unfortunately, Crackdown 3 is absurdly easy, largely thanks to weapons that automatically lock onto foes, meaning all you need to do is hold the trigger and jump around like a kangaroo until victory lands safely in your lap. Even boss battles are a breeze, so long as you keep a piece of cover between you and the big bad.

If encounters don’t descend into a farce of triviality, they can be frustrating as you’re bombarded with attacks from all directions. The final confrontation is particularly obnoxious, with the main villain releasing attacks that come out of nowhere. It’s a sad state of affairs, since chaining together abilities with your growing catalogue of guns can be thrilling.

The undeniable highlight of Crackdown 3 is watching your agent grow with the retrieval of upgrades. Agility, driving, explosives, firearms and melee-combat are upgraded as you play, seeing you amass experience by repeatedly performing each action. Watching a trail of colourful orbs spew out of enemies and into you is incredibly satisfying. 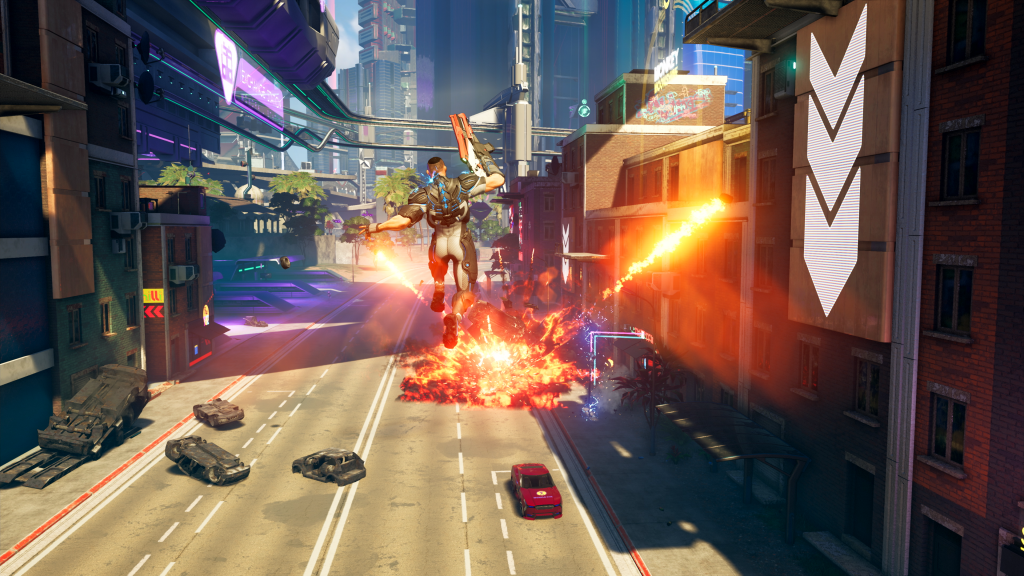 Upgrades lead to some satisfying abilities I found use of too. Leaping off a building and pounding into the ground only to watch my foes fly away in the blast was hilarious. Morphing my agency car into an arachnid buggy that could crawl up walls and leap across chasms was equally wacky, although served to highlight how obtuse vehicle handling can be in Crackdown 3.

Knowing I was only seconds away from unlocking a radical new skill made me want to push forward, causing chaos in the city of New Providence despite its lifeless identity. Eventually gaining the strength to lift a tank above my head and throw it into oncoming traffic certainly left me with a daft smile, even if I know the journey I was about to conclude was ultimately hollow.

The diverse range of tools you’re given to cause destruction in Crackdown 3 simply don’t feel made for its mundane world. It doesn’t feel alive, with strolling pedestrians and muted propaganda blasted from speakers doing little to make you feel invested. There are audio logs hidden aboard hackable towers throughout the world, but I really didn’t care enough to seek any of them out.

Those hoping for a vast story, or even a mild continuation of the narrative arcs that began with the original Crackdown, will find little resolution here. The Agency’s potentially sinister motivations are seldom touched upon, and the gaggle of villains you find yourself up against are devoid of any meaningful substance. 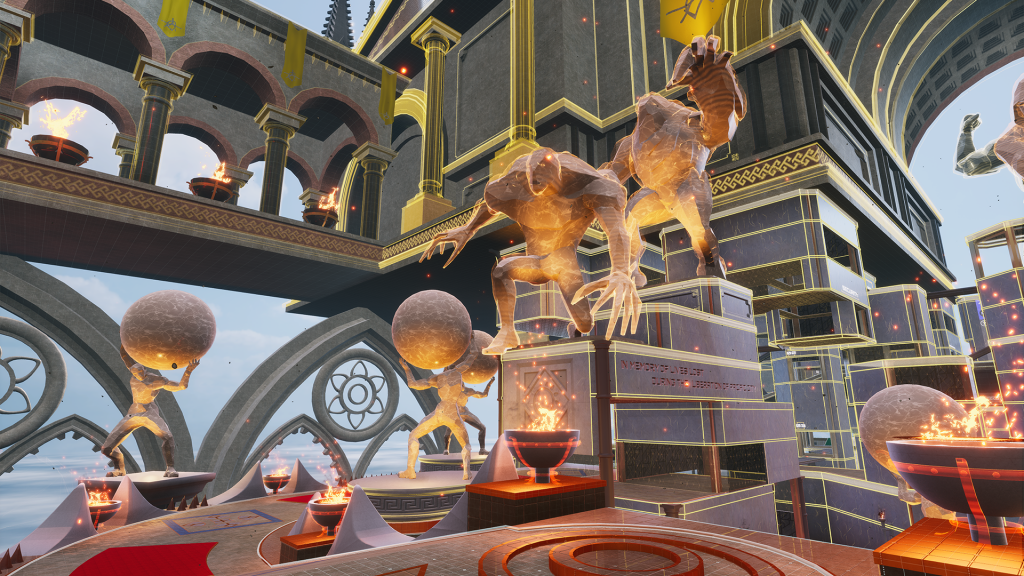 Wrecking Zone multiplayer is one of the only places where Crackdown 3’s rampant destructibility comes to life, and it doesn’t feel well implemented. One of the modes, Agent Hunter, has you fighting against other players in a sprawling environment filled with wide-open spaces and jump boosters, making every passing second a frantic attempt to rack up kills.

Your objective is to collect badges from fallen enemies, but poor performance amidst bland environments made it harder than it should be. Acting as one of only two modes, I struggle to see Crackdown 3’s multiplayer component taking off at launch. Progress is lacking and the auto-targeting combat leaves very little room for skill development.

I can’t help but feel that a bigger, better and arguably more ambitious vision of Crackdown 3 existed before this incarnation – one that would have made use of the cloud technology Microsoft so proudly boasted about only a few years ago. Now it feels like a pipedream, as we’re left with a serviceable yet forgettable world to explore.

Microsoft’s first-party library has an undeniably bright future ahead of it, with countless studio acquisitions made in recent months, but sadly this isn’t the open-world juggernaut you’ve been waiting for. The open-world genre has come on leaps and bounds in the past decade, but Crackdown 3 feels firmly stuck in the past.