What is the Corsair Gaming K70 RGB?

Both mechanical-switch keyboards and multi-colour backlit keyboards have been around for a while. However, what we haven’t ever had before is a keyboard that combines the two, marrying the high-end typing ability of mechanical switches with the pizzazz of 16.7 million different colours of backlighting. That makes the Corsair Gaming K70 RGB a first. It also makes it one of the snazziest keyboards you can buy.

Although we’ve had backlit mechanical switch keyboards for a while now they have been restricted to a single colour, as the only previous solution was a switch with a single embedded LED. This has meant Cherry – the company behind most of the switches in modern-day mechanical keyboards – has had to develop a new switch, which it has done in conjunction with Corsair.

The solution is to have a clear switch with a lens that can then disperse the light from a trio of LEDs mounted on the circuit board below. That RGB trio can then be used to create any of 16.7 million colours for each individual key, allowing for multi-coloured animations, backlighting schemes for different games and much more.

The new Corsair range – the K70 RGB, K95 RGB and K65 RGB – will be the first keyboards anywhere to use the switch, though they will eventually be available from other manufacturers. 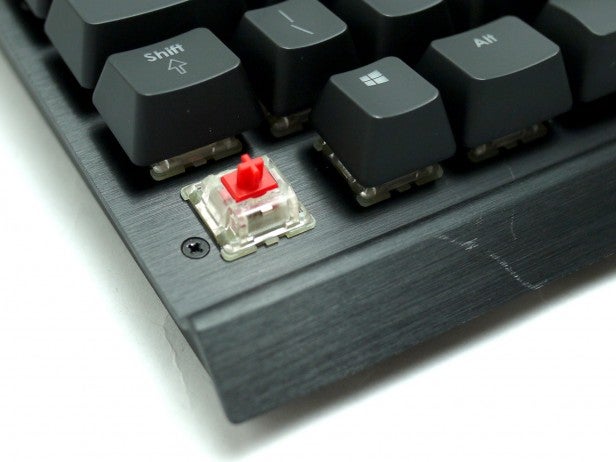 The K70 RGB is the direct successor to and replacement for the K70. As such it retains the same basic design, which is a very good thing. The K70 was to our minds the best looking keyboard of its generation so there was little reason to mess with it.

The key design element is that the whole top surface is one thick sheet of brushed aluminium. It just instantly gives off a premium look and feel. Previous Corsair keyboards have been available with a plain aluminium and a gun metal finish but for now the RGB is only available in this superb black anodised finish.

The dark theme is continued with matt black keys and a lovely knurled aluminium volume wheel in the top right.
The look is definitely quite stark and mechanical – particularly with the keys sitting high on the stalks of the key switches – and is a far cry from the low-profile sleek looks of a Mac keyboard, but there’s a definite understated confidence about the design. 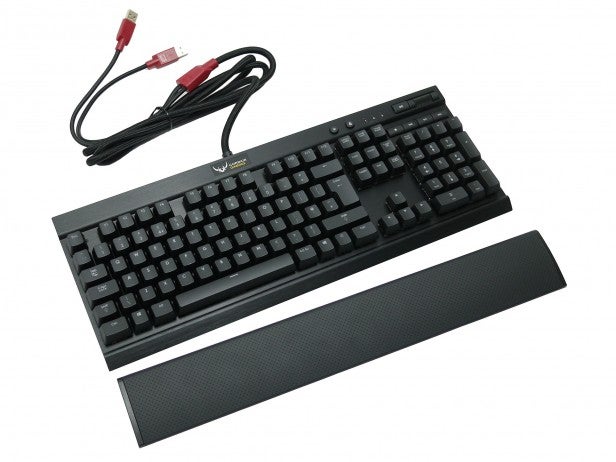 We only have two gripes. The first is a result of the new branding Corsair is applying to its peripherals range. In line with the launch of this keyboard Corsair is launching a new brand – Corsair Gaming – which replaces the Vengeance brand of old (the lower cost Raptor branding will remain).

With this new branding has come a new logo that sits proudly in the top centre of the keyboard. The problem? The new logo is far more prominent and ‘gamer’ than the subtle Corsair logo of the K70. It’s a small thing but it caught our eye, especially as the cut out for the new logo is just a rectangle rather than following the curves of the logo as on the original.

Our other little grievance is the key switches themselves. Because Corsair leaves them exposed, and because they’re now clear/translucent they’re much more noticeable against the black of the aluminium. A little bit of trim to hide these edges would be a nice touch.

Otherwise, though, it’s all good. The thick, braided cable is a plentiful 1.5m long, the multimedia buttons are nicely positioned and generally it’s just a nice bit of kit. 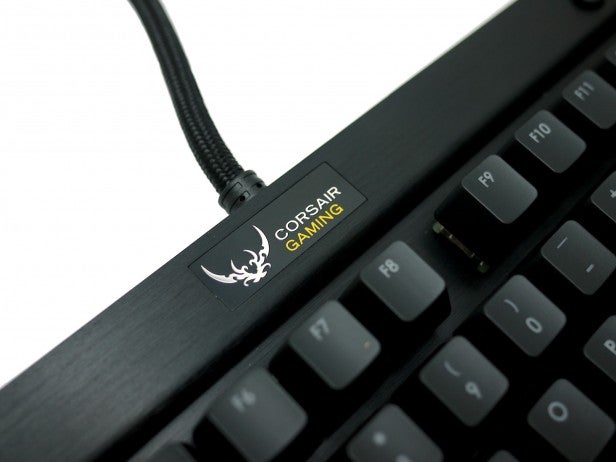 Aside from its fancy RGB backlighting this keyboard is fairly slim on features. It doesn’t have extra macro keys – though all the keys are programmable using Corsair’s software – or any of the truly frivolous gaming extras such as screens. Corsair has even taken away the USB hub, key removal tool and spare set of contoured WASD and 1-6 keys that came with the original K70. The removal tool is a particular shame as it makes removing the keys – for cleaning and such like – decidedly more difficult.

What you do get are a set of multimedia keys consisting of a volume wheel and buttons for Mute, Play, Pause, Back and Forward. These are all nicely positioned and easy to use, and are included in the RGB backlighting fun. What’s more Corsair’s software allows you to configure how they work with different music playback software such as iTunes and foobar. 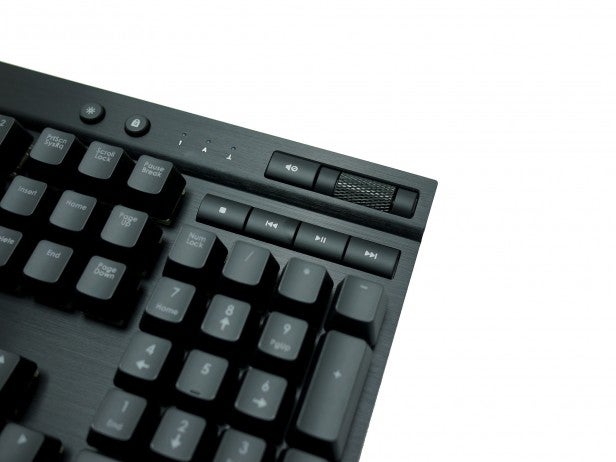 There are also buttons for adjusting the overall backlight level – from 0 to 4 – and turning off the Windows key. In fact, the latter can also be configured to disable Alt F4 and Alt Tab, for even more protection against accidentally (or maliciously) exiting a game.

Round the back of the keyboard there’s also a BIOS switch, which is there to help ensure the keyboard is compatible with as many BIOSes as possible. If it doesn’t work with one setting, switch it to one of the other three.

Rounding things out are the feet on the underside, which are notable because there are both front and rear feet, allowing for greater freedom for getting just the right angle, though they both only have one height setting.