What is the Turtle Beach PX22?

The Turtle Beach PX22 is a noise-isolating wired stereo gaming headset that comes with both USB and analog connectors. At £69.99 it’s a mid-range set with a surprising amount of features including an inline amp and controller that lets you adjust volume, bass, treble and mic volume on the fly as well as providing the ability to take calls while gaming.

The PX22 is a well-built headset made of black plastic with soft fabric covered headband and ear cups. The top is made of a soft faux-leather material stitched with light-blue thread and has the company name – Turtle Beach – emblazoned on it. It’s a good look and the detailing makes it look like a more expensive product.

The fabric is both comfortable and breathes well, which means you can wear the Turtle Beach PX22 for hours without getting sweaty ears. It clasps the head firmly enough to keep the headset in place, but not so strongly as to cause discomfort.

At 231g the Turtle Beach PX22 is also lighter than most of the competition, something that bodes well for long gaming sessions and if you want to travel. 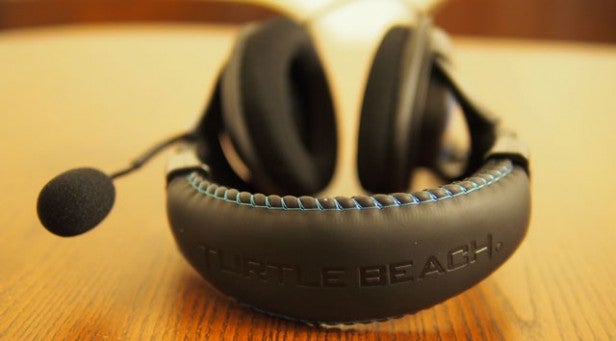 The headset is connected to the volume controller using a 1m cord with a 3.5mm jack meaning the PX22 is versatile enough to use as a pair of headphones too. There’s another 3m of cable coming out of the controller meaning you have plenty to spare when using it with a console.

The PX22 has clearly been designed with maximum comfort in mind and it succeeds in that regard well enough. It doesn’t feel quite as robust as some of the headsets we’ve tested, but that’s one of the reasons it can keep the weight down. We’ve spent many hours using them and rarely need to remove them to give our ears a breather.

Sound quality is just as important as comfort, though, and Turtle Beach has done a storming job in that area too.

Turtle Beach has been delivering quality sound for 30 years so we expected the PX22 headset to be good and we were not disappointed. The 50mm speaker drivers deliver excellent sound performance, while the noise-isolation provided by the cups is solid. It’s not quite as brilliant as the Sennheiser PC 350 SE we reviewed recently but still manages to keep external noise out and keeps sound leakage to a minimum.

Stereo imaging is bang on and what’s even better and unexpected is that the virtual surround sound works well, too. Channels are clearly defined and the acid test of gaming proves that the Turtle Beach PX22 truly delivers. The explosions and gun fire in Battlefield 4 rumble and rasp while the throbbing tank engine bassy rumble is perfectly recreated, making you feel right in the middle of all the action. If you enjoy camping (shame on you!) you can hide in a corner and know exactly from which direction a running soldier will approach from providing you with a vital edge for that early headshot.

The sound quality of the Turtle Beach PX22 is truly outstanding for the price range, in fact it matches more expensive headphones we’ve tested. Even at full volume there no distortion and bass is well balanced. You’ll be as happy listening to music and watching movies as you are gaming, but it’s in the frag arena that it really excels. 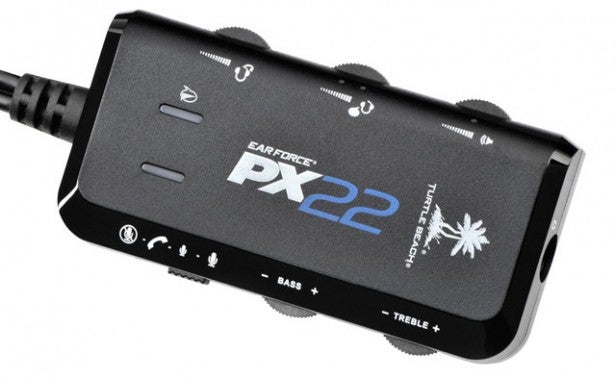 It’s the inline amplifier and control panel that seals the deal. Allowing you to tweak bass, treble, mic and volume settings using wheels, it delivers and incredible amount of tweaking while you game. It’s not quite as easy to use as other headsets that have volume controls on the ear cups but it does have a clip to attach it to your pocket or shirt and the additional settings more than make up for the extra faff. You can even attach your phone via cable to take calls without having to remove the PX22. It’s hardcore gaming heaven. 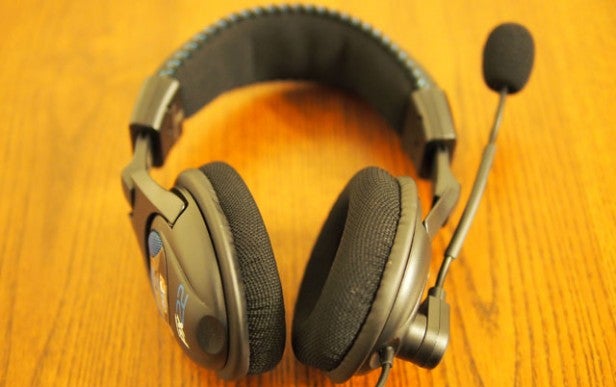 The mic boom on the Turtle Beach PX22 is made of thin flexible metal ending in a sponge covered mic that can be moved all the way up so it’s out of the way if you want a quick snack. Unfortunately it’s not removable so if you do want to use them it as headphones outdoors you’ll look a little silly. On the plus point the boom adjusts easily and stays in place once moved. It is clear and accurate and works perfectly for both gaming and VOIP calling. Noise cancellation works well, but is not quite on par with the best out there.

The Turtle Beach PX22 headset is one of the better ones we’ve tested and is a bargain at £69.99. You can actually pick it up for £45 from some retailers and at that price there’s no reason to consider anything else unless wireless or 7.1 surround sound is a must.