Although setup is as easy as simply plugging the keyboard in – it will be automatically recognised and installed – to get the most out of this keyboard you have to download the Corsair Gaming Software. It provides all the tools for changing the lighting schemes as well as setting up macro functions, profiles, key actions and much more. Without it you have no control of backlighting other than brightness level.

It’s very sophisticated software but unfortunately that means it’s also rather complicated – it really isn’t for the faint hearted. Just working out how to setup some simple lighting schemes took a couple of hours of trial and error.  A few more one-stop options or a beginner’s interface option might be useful for those that don’t want to spend the first two hours with this keyboard just scratching their heads. 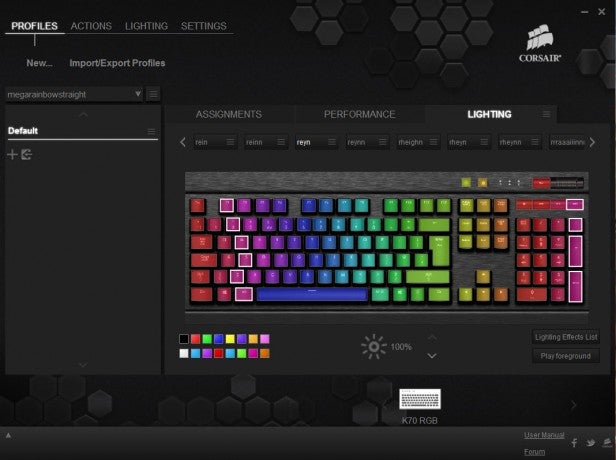 Once you’ve got the hang of it can certainly do some clever things. Keys can be controlled either individually or in groups and can have any three types of lighting applied: background, foreground and type. Background is basically the default static colour for any given key in any given profile, while foreground is the colour applied by an animation, i.e. a red stripe scrolling across a white background.

Type lighting is activated when a key is pressed, with keys either staying on for some set amount of time or until pressed again. It can either be individual or you can have a multi-key splash effect pulsate out from the pressed key.

With this combination you can animate pretty much anything you like. We made a simple scrolling rainbow and a handgun firing a bullet, and we’ve seen Matrix style scrolling green lights and more. With enough patience you could really create some clever stuff. 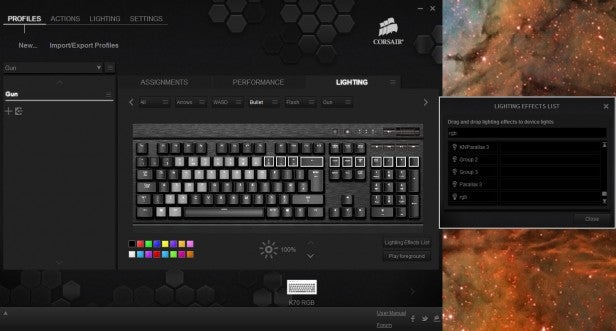 The key limitation is that animation can basically only be defined by selecting a group of keys, choosing a colour, speed and direction of movement. It would be much easier for certain animations if you could define frames on a timeline, just like you would with a cartoon. In case you were wondering, no you can’t watch images or play video through the keyboard.

On top of all the lighting capabilities the software also lets you change the function of each key, with options for performing a macro, filling in text, substituting for a different keystroke or combination of keystrokes, executing an application shortcut, changing mouse DPI, setting off a timer (having the keyboard flash at you when it’s done), duplicating mouse functions and mapping multimedia controls. 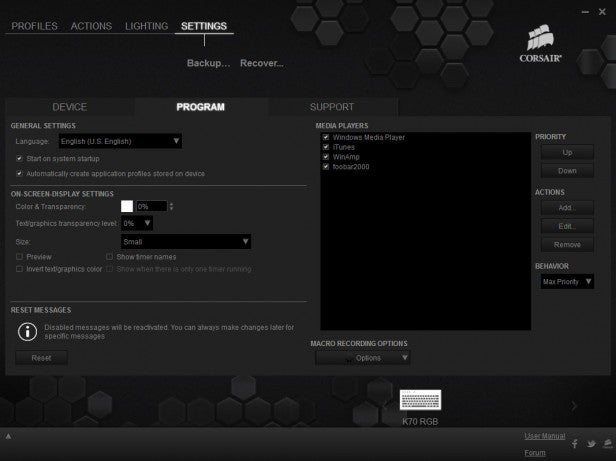 Again, the learning curve is steep but the power of the software is plain to see. A few hours playing around with it and you’ll have your system optimised like never before.

Typing is a joy on the K70 RGB. The Cherry MX switches are as responsive and speedy as ever, allowing us to type as fast as we ever have done. We used the model with MX Red switches but Blue and Brown are available too if you prefer the different feel they provide. If you’ve never typed on a mechanical keyboard, seriously go and try one – they’re a revelation, assuming you’re a competent enough typist

Key noise is as prominent as ever, though, with typing giving off a clattering, clacking noise that registered at 67dB from up close. This compares to around 61dB for the noise-dampened Logitech G710 and 60dB for the rubber-membrane equipped Corsair Raptor K40. We don’t mind the noise, but if you’re in a quiet office or game late at night it’s a consideration. 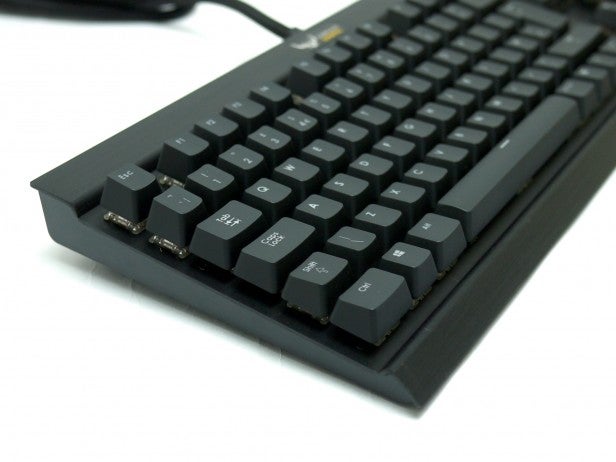 But of course all that was to be expected. The real question with this keyboard is whether the RGB lighting does the trick and whether it’s worth the premium, and the answer to both is ‘yes’, just.

Overall, it’s great fun to play around with the animations and we particularly like the Type lighting effects – having each key momentarily light up then fade away as you type is surprisingly addictive. We didn’t really get to the point where we actually found any of the different lighting schemes useful, but the potential is clearly there. For instance, you can use the timer to have the keyboard flash at you when your respawn time is up or have colour-coded keys for use in different apps like photoshop.

In this regard this is the sort of product that gives back as much as you put in. If you only do the bare minimum with it then it will seem of limited benefit – other than a bit of bling – but with time and effort it could really enhance your computing life. 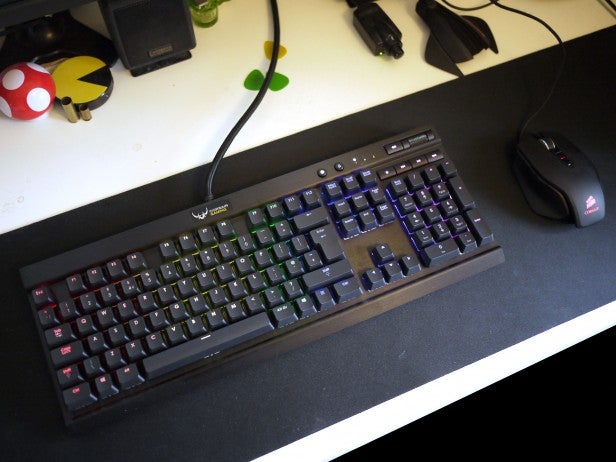 We did note a few minor issues, though. First, the maximum brightness isn’t as high as we were hoping, with it only approximately matching the lowest brightness setting on the original K70. Admittedly we tended to use that setting on that keyboard most of the time, but for brighter environments the extra headroom would be useful.

There’s also a lot of light leakage around the keys, which is arguably both a good and bad thing, depending which way you look at it – good because it fills out the picture a bit more, bad because it doesn’t look as tidy. We do wonder whether the keys should have been made more translucent to better show the light and draw attention away from the switches underneath.

Perhaps the most obvious downside, though, in terms of creating wonderful looking animations, is the fact that this is still a standard keyboard with a standard key layout, which does limit your options. 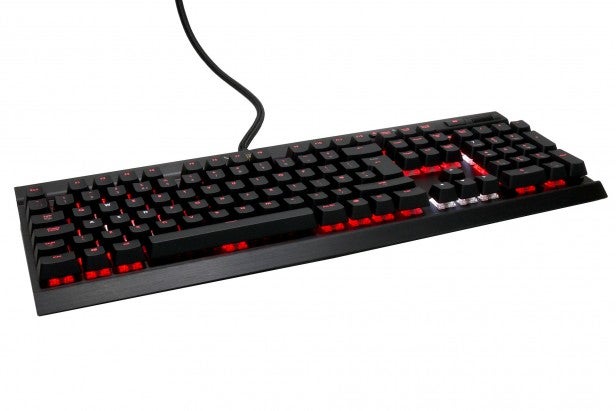 Should I buy the Corsair Gaming K70 RGB?

Priced at £140, the K70 RGB is clearly a premium proposition but then most mechanical keyboards still are – the K70 is still over £100 and you can’t really get any mechanical keyboard for less than £60. So, with the step up in technology, it’s reasonably priced.

In terms of performance, the lighting is primarily a novelty but it is genuinely fun to play with and is at least a bit useful, and will likely only get more so the more you integrate it with your work and play. Moreover, it only adds to what was already a class-leading premium keyboard.

That said, it is only the lights that sell this keyboard over its predecessor and the removal of the extra keys, key removal tool and USB hub are a bit galling.

The Corsair Gaming K70 RGB is a great keyboard and perhaps the ultimate bit of gamer bling. One or two omissions mean we can’t give it top marks, but it’s still one of the best gaming keyboards you can buy.