What is the Corsair K70?

The Corsair K70 is one of the most desirable gaming keyboard’s currently available thanks to its stylish brushed aluminium construction. It’s also fully-equipped with mechanical switches for speedy typing and greater longevity, and it’s fully backlit too.

Although it’s branded as a gaming keyboard and does come with replaceable contoured WASD keys there are no extra gaming keys here, though you do get a selection of multimedia keys. 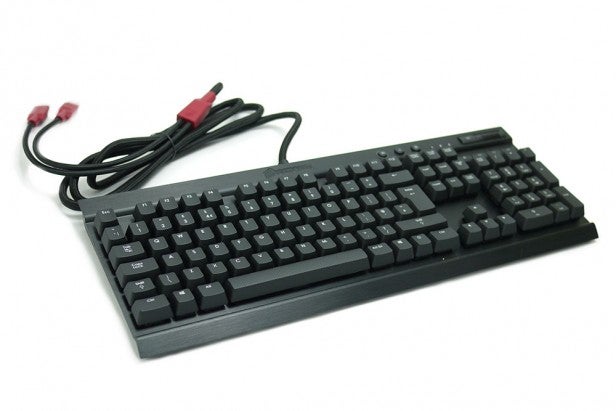 The Corsair K70 is available in either a plain brushed aluminium finish or a black anodised version and either could claim to be the most stylish keyboards of their type currently available. We’d give the nod to the black version just because it’s that bit more uniform, but both look great.

The key is the single thick slab of aluminium that makes up the top layer of the keyboard’s base. Although 2mm may not sound very thick the impression it gives off is one of utter solidity and it is enough to give the keyboard a reassuring heft.

Soft-touch black plastic keys finish off the all-black look while red backlighting adds that bit of ‘gaming’ flair, as well as the practical advantage of being able to see your keys in the dark. The contrast of the red and black looks superb, though clearly the overall look isn’t exactly meant to complement the lighter tones of something like an iMac. The black boxes and glowing lights of gaming rigs is where the K70 calls home. 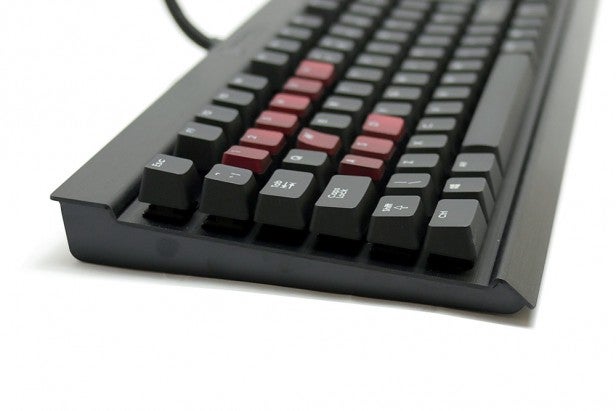 Unlike the Logitech G710 , the K70 doesn’t have the keys slightly sunk below a protective surround, with them instead stood proud on the stalks of the switches below. This means there’s a slightly greater chance of damaging the key cap or switch by catching the edge of the outer keys on an item of clothing or such like. Although this may sound unlikely it is something that we’ve experienced before on mechanical keyboards arranged like this.

A matching black (well, matching if you choose the black version) wrist rest is included. It clips onto the front and provides a little extra support for your hands. However, as ever with included wrist supports, we found it far too low to actually hold your hands at the right angle. It does have a nice soft touch finish though.

The other obligatory ergonomic feature is a set of flip up legs on the underside for adjusting the keyboard’s angle. Here though, there are feet at both the front and back, allowing for a greater number of angle options. 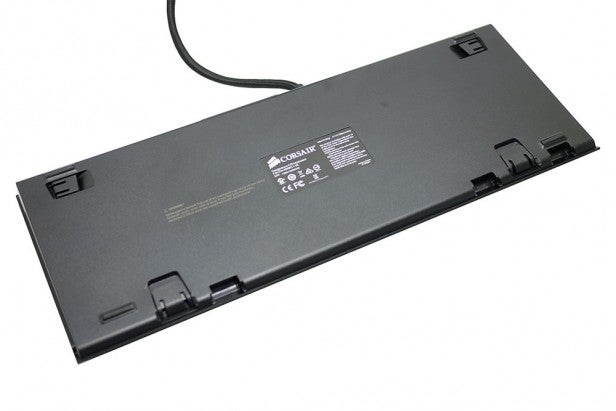 This keyboard’s primary feature is simply that it uses mechanical key switches for longer life and a more precise key action. Specifically, it uses Cherry MX switches and you can choose from either Red, Brown or Blue versions. The Red have a fairly light linear action, the Brown have a tactile (i.e. there’s a bump when the switch is activated) action while the Blue have a tactile action with an audible click. We reviewed the version with Red switches.

Joining the full complement of standard keys are a selection of multimedia keys. These don’t use mechanical switches as they simply don’t receive the same level of use/abuse and there isn’t quite the need to have a speedy action. We don’t have a problem with this. 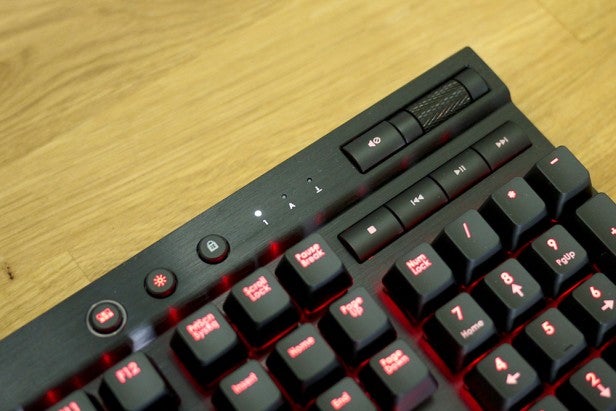 The keys consist of Stop, Back, Play/Pause and Forward, just above the numkeys, with a Mute button and volume wheel above these. The volume wheel is metal and has a lovely knurled finish, adding further to the overall premium feel. To the left are buttons for deactivating the Windows keys, controlling the four levels of backlight brightness and switching between all the keys being lit and just having the WASD, cursor and 1-6 keys illuminated.

In between the latter two sets of buttons are three tiny white LEDs to indicated the status of the standard Lock keys.

One feature that sets this keyboard apart from several others and bumps its gaming credentials up a bit – after all, there are no programmable macro keys here – is its inclusion of an alternative set of key caps to replace the standard WASD and 1-6 keys. These are coloured red and contoured so as to guide your fingers back into position in the heat of battle. To replace the key caps a simple key cap removal tool is included with the keyboard, which is a nice touch. 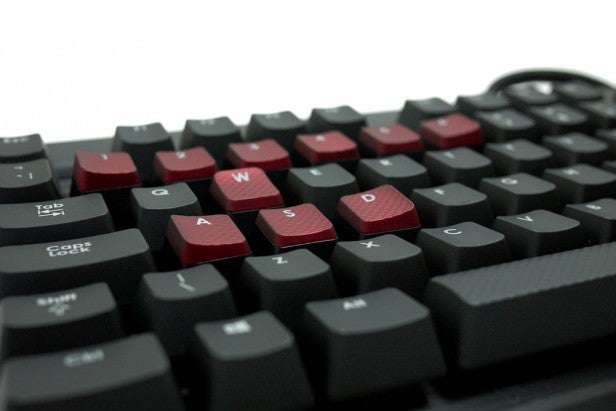 Rounding off the feature list, the keys are are 100% anti-ghosting with full key rollover so there should be no issues with complicated multiple key presses failing to register. There’s also a USB pass-through function, via the use of an extra plug on the thick, braided, 1.5m cable and a socket on the back of the keyboard – great for providing easy access for a USB stick. Next to this is a BIOS switch that enables you to switch the keyboard into a number of different modes that should help with compatibility with older BIOSes.

For our testing Corsair also supplied us with a Corsair M45 mouse (a very decent optical gaming mouse) and the MM200 mousemat. The latter is a huge padded cloth mouse mat that’s large enough to fit under your keyboard and mouse and stretch some way beyond. It sounds like a total gimmick but it’s actually quite nice. Your mouse doesn’t fall off the edge of a mat, your keyboard stays secure, if gives somewhere soft to place your phone and other little extras and the mousing surface is very nice too. Worth considering if you’re thinking of grabbing a full Corsair peripheral set. 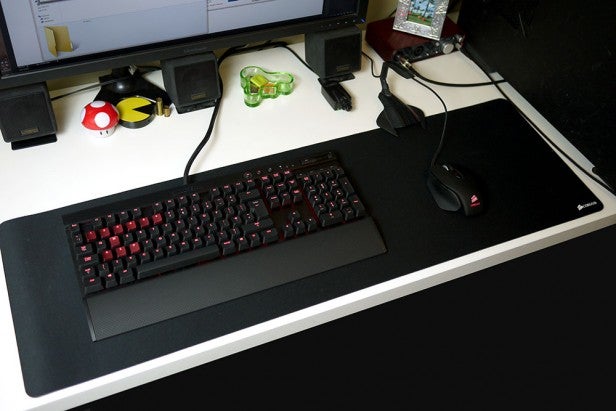 The Corsair K70 performs as excellently as we’d expect. The Cherry Red keys are incredibly responsive, allowing for fast, accurate typing, while the soft-touch surface of the keys provides a good grip. The latter will probably polish off as it does with most keyboards but at least to begin with it’s a better surface than most.

The key labelling and backlighting is also excellent, making for a clear readout in all conditions. All except, that is, for the contoured keys, where the number keys don’t display the secondary function of the key – a bind if you haven’t quite got the location of the likes of the percentage symbol fully embedded in your touchtyping database.

Also, the backlighting on the multimedia keys is a bit weak but again this is a relatively minor point as there are few enough that it’s easy to know which one’s which. 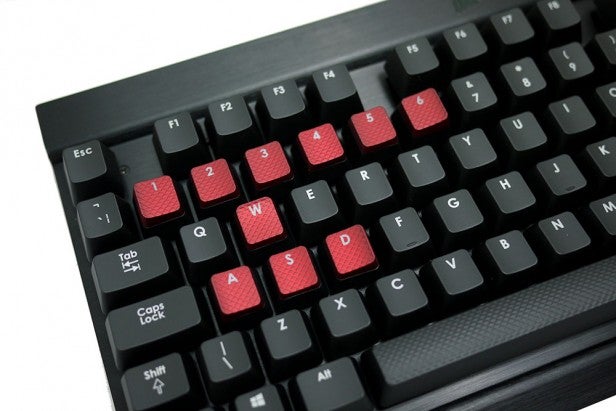 To be frank, we thought the contoured keys would be something of a gimmick but in practice we found they worked superbly, providing just the right tactile cue that made it noticeably easier to relocate the desired finger position when gaming. What’s particularly nice to note is that the contouring doesn’t impact on your typing, so you can leave these caps on permanently (aside from the issue with the labelling).

It would be ideal if the caps could be used on other keys, for if you like to use a different set of keys other than WASD for gaming, but with the way Corsair has done this doing so would result in a seriously whacky key layout. 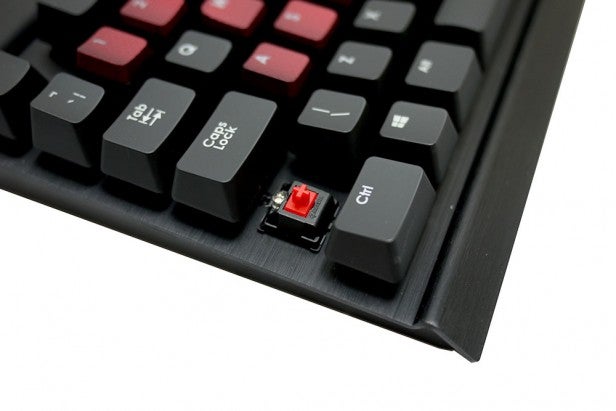 Should I buy the Corsair K70?

If you’re in the market for a premium keyboard that has the looks as well as the features then there are few better examples than the Corsair K70. It’s beautifully made – if you like moody black and red styling – and performs superbly as both a typing and gaming tool. For a mechanical keyboard it’s also priced very competitively at just £105. Plus, if you fancy different key switches or fully customisable backlighting these are options at purchase too.

The only thing it really lacks is a dedicated set of programmable ‘G’ gaming keys and macro banks like on the Logitech G710 . For that you’ll have to step up to the Corsair K95 for an extra £20 or so.

The Corsair K70 is simply one of the best premium mechanical-switch keyboards on the market. Whether you’re after a keyboard mainly for typing or gaming purposes it performs superbly, just so long as you don’t want extra programmable G keys.

Next, read our Logitech G710 review