What are the Chord Hugo TT & Chord TToby?

Chord Electronics’ Hugo TT is one of the finest DAC/headphone amplifiers around, and also one of the most versatile. Thanks to its remote control, its wealth of digital inputs and Bluetooth aptX support, it makes an ideal digi-centric preamp – so naturally, Chord has built a matching stereo power amp: the TToby.

This is high-end hi-fi for the binary audiophile – no analogue inputs, but plenty of ways to feed it ones and zeroes that are spat out of either your headphones or speakers of choice. 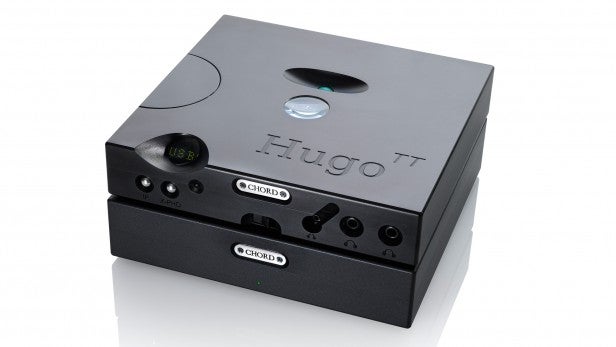 The Hugo TT has been around for a little while now, so you may already be familiar with its compact square casing, those rounded corners and the funky porthole upon its silicon soul.

That circular window on top is undoubtedly the most striking visual feature, and looks down at the circuit board within. It’s a beautiful thing, and a really simple way of making a piece of tech so much more interesting.

Further back from the window is a curious clear ball set within a deep scallop, and it lights up when the Hugo TT is turned on, turning red, then orange and finally settling on blue. But prepare to have your mind blown… it’s the volume control. Rolling it right turns the volume down and left whacks it up – and the ball changes colour to provide a visual indication of the level! Super-nice.

On the front panel are a pair of 6.3mm headphone sockets, one 3.5mm headphone socket, a power switch, an infrared receiver for the remote, and two buttons. The buttons are curiously labelled “IP” and “X-PHD”. Yeah, thanks, Chord…

The IP button is actually just a source selector. (Ah, IP for “input”, I getcha now. Kind of.) It cycles through optical, coaxial digital, Bluetooth, standard USB, and USB for Hi-Res Audio.

X-PHD turns out to be short for “crossfeed”. Of course it is, silly me. It’s sort of a DSP setting that promises to enhance the spatiality of the sound field. The button cycles through settings for none, minimum, medium and maximum. 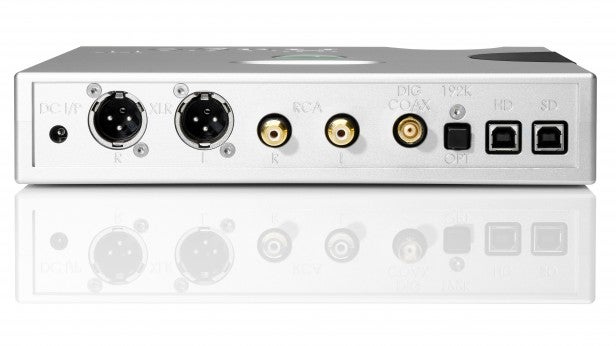 Socketry around the back comprises a pair of USB-B sockets – one standard and one for Hi-Res Audio sample rates – as well as optical, BNC coaxial digital, RCA phono and balanced XLR inputs. There’s also a power socket, although an internal rechargeable battery means the mains adapter doesn’t need to be connected at all times.

In fact, if you’re simply using the Hugo TT for headphone duties and streaming to it over Bluetooth, you can even disconnect it completely and carry it around the house.

As mentioned, there are no analogue inputs whatsoever, which seems a real shame at a time when we’re going through a vinyl-playback boom. 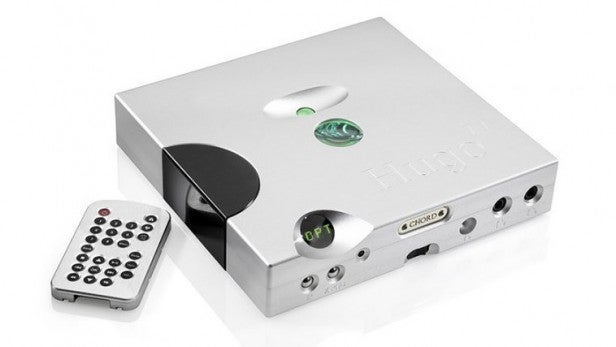 The Hugo TT’s remote control is super-classy, despite at heart being, I suspect, a fairly generic plastic unit with the dreaded blister buttons. Thanks to a thick, brushed aluminium casing bolted on top, it feels top-drawer. Even the blisters somehow don’t feel too nasty.

As mentioned, the Hugo TT has a Bluetooth antenna and aptX support – no Wi-Fi, sadly – but the real thing of note internally is the DAC chip. Most other DACs use a standard off-the-shelf chip with no modification, but Chord’s technical genius, Rob Watts, reprograms the Spartan-6 FPGA chip to tune it to the company’s requirements.

The TToby is styled as the Hugo TT’s perfect match. Its dimensions and design ethos are identical, and it, too, is available in black or silver finishes. Like most power amps, its controls and functions are minimal – you get a power LED on the front and an on/off switch on the back panel.

Also busting out of the TToby’s back are a set of 4mm banana-plug terminals, a stereo RCA phono input and balanced XLR inputs. Lastly, there’s a standard kettle-plug power socket. Seriously, what more do you need?

Chord quotes the power output as 100W RMS per channel (into 4 ohms), and the TToby uses Class AB amplification.

I did most of my testing with the TToby hooked up to my Mordaunt-Short Performance 6 LE reference speakers, and the Hugo TT’s headphone output connected to either a pair of Grado GS1000e, Audeze LCD-4 or Noble Audio Katana. The Hugo TT and TToby were wired together with Chord Company Epic XLR cables. The source was mostly a MacBook playing a mixture of Hi-Res Audio and CD-quality FLAC files.

Let’s start with the Hugo TT as a DAC and headphone amp. Purely in terms of sound quality, I consider this to be the best headphone amplifier I’ve ever heard, regardless of price. I’ve yet to get my hands on the company’s range-topping Dave model, but I find it hard to believe there can be much room for improvement over the TT.

Listening to “The Old and the Young” from Midlake’s Antiphon album, the extra sense of scale and energy that the Hugo TT releases is utterly breathtaking. It’s crystal-clear and toe-tappingly rhythmic at all times.

In the rather subtler “Days Spent Floating (In the Halfbetween)” by Okkervil River, it isn’t just possible to hear every single instrument; it’s almost impossible not to want to pick them out, one by one. The clarity and immensity of the soundstage is simply magnificent, the realism of the vocals just incredible. The music shimmers and shifts all around, with no thickening or mistiming, and it never feels cold nor clinical.

The “crossfeed” function is actually quite effective if you need a little more spatiality, but most of the headphones I used are already so good at that out-of-head listening experience that I didn’t really find it necessary to turn on that function.

To test out the Bluetooth streaming I paired up the Hugo TT with the aptX-compatible Onkyo DP-X1 Hi-Res Audio player, and later an Elipson a100-RIAA BT turntable. After all, with this system lacking an analogue input, I had to get my vinyl fix somehow.

I never had any issues with Bluetooth pairing or signal dropout, although of course there’s a noticeable fall in audio quality. Things aren’t so bad with aptX devices, though, where you can wirelessly achieve CD quality. It’s a convenience feature, really, and if you’ve spent close to six grand on this system, you’ll probably stick to a less compromised hard-wired signal path. 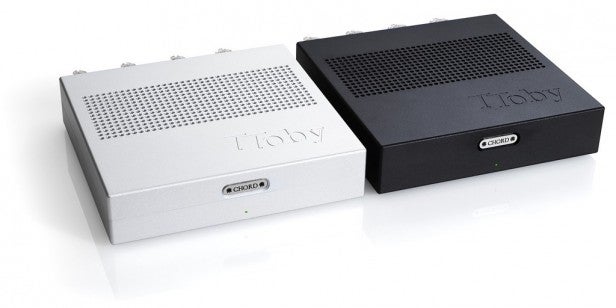 Moving onto using the Hugo TT as a preamp and firing up the TToby for speaker-listening, the sonic signature of the power amp is wonderfully similar to that of the headphone amp. But with extra muscle.

The TToby’s handling of transients, which Chord has always managed so well, is superb in its precision – notes start and stop seemingly instantly. Glenn Gould’s 1981 recording of Bach’s Goldberg Variations is a rollercoaster treat of perfect piano notes.

Aside from the lack of analogue inputs, there’s one other foible of using this pairing as a hi-fi system, however, and that’s the volume setting. When you turn on the Hugo TT, it always defaults to a volume that’s way too loud, forcing you to remember to turn it down immediately before you play anything. It’s super-annoying and could potentially damage your speakers if you forget it. Thankfully, I imagine this is something that Chord could fix with a simple firmware update. Here’s hoping. 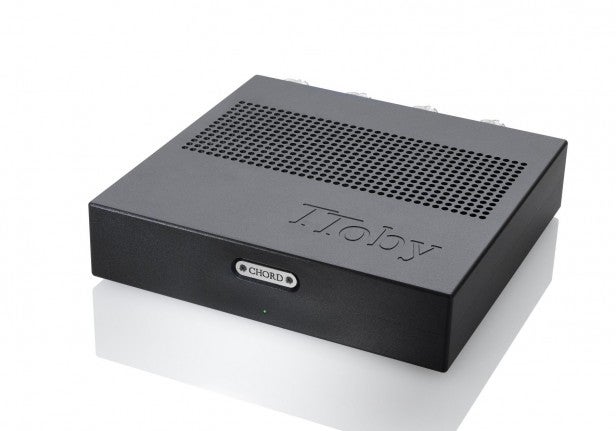 Should I buy the Chord Hugo TT & Chord TToby?

If you’re considering this combo, it’s probably because you value headphone listening as highly as going into full-on hi-fi mode. After all, there are streaming amps out there that offer amazing performance for less money – such as the Moon Neo Ace – but without the top-drawer headphone amplification.

As a mash-up of those two experiences, then, this is an absolute stunner. It delivers through headphones or speakers with equal clarity, power and agility, despite its minuscule dimensions.

However, this is a digital-only setup, with not a single analogue input. If you’re a vinyl junkie or have any plans of surfing the resurgent wave of record buying, this might not be for you – unless you’re happy being limited to one of the growing number of low-end turntables with a digital output or built-in Bluetooth. A matching Chord phono stage with a digi-out would be a welcome addition, much like the MP100 that McIntosh has designed for its MXA70 micro system.