What is the McIntosh MXA70?

Micro hi-fi systems appear to be a genre fighting a losing battle against Bluetooth speakers. And yet, fitting a decent stereo experience into a small space is still a worthy cause. Legendary American hi-fi specialist McIntosh has taken that concept one step further, by trying to make the best-sounding micro system it possibly can – money no object.

This is no high-end throwback, though. It doesn’t have a CD player. Or a radio. Instead it has a built-in DAC and the connections for hooking up a range of digital audio sources – albeit wired, not wirelessly.

I mentioned this was a “money no object” system, and therein lies the rub. You’ll need £5,995 to join the McIntosh club. The company’s only cheaper option is a pair of its new RS100 active speakers for around £2,000.

Can a micro system, no matter how well engineered and sweet-sounding, really justify that sort of money? Time to plug in and find out… 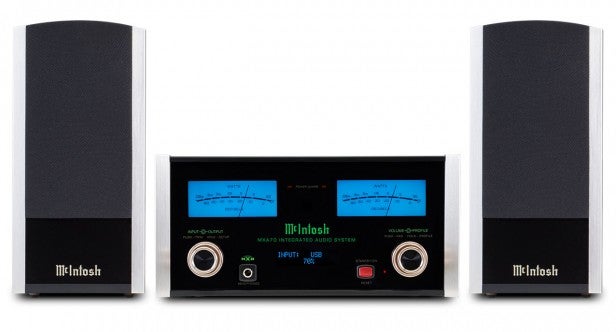 If tech’s value was reflected in its weight, you could well believe the McIntosh MXA70 is worth its price tag. The bijou speakers alone weigh an absolute ton, and the main unit reminded me of a few back-breaking valve power amps I used to own.

The finish and build quality is truly breathtaking. The gloss-black finish on the speakers’ aluminium enclosures is perfection. You could do your hair in it.

They’re clearly designed to have the cloth front grilles left on, though. The grilles can be removed, but the fascias beneath seem to have missed out on any kind of design treatment. 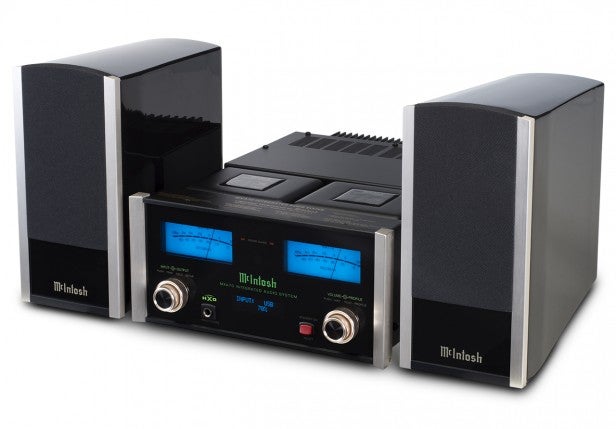 The speakers really are ickle. They’re rear-ported, so ideally need a little breathing room behind them for the bass ports, and they feature a combination of 19mm titanium-dome tweeter and 10cm paper woofer. Don’t expect Earth-shaking bass – although there is connectivity for a powered subwoofer if you want to beef up the bottom end.

You get a pair of 2m-long speaker cables, which doesn’t seem overly generous. However, micro-system owners do tend to place their speakers slap-bang to either side of the main unit. The cable is decent quality, as you’d hope, and terminated with spade connectors that make it a doddle to wire up the speakers.

The MXA70’s hand-built main unit is unmistakably McIntosh. The styling harks back to the 1950s, with twin blue-lit VU meters and chunky knobs dominating its face. It wouldn’t look out of place in a B-movie laboratory, with a bespectacled scientist twiddling the dials while a UFO-on-a-string gets waved past his window.

The knobs are actually dual-concentric, with the central knob performing one operation and the outer ring performing another. It’s a neat way of adding extra controls without making the fascia cluttered, which I’m all in favour of.

The front also plays host to a red (yet rather low-key) power switch and a 1/4-inch headphones socket. 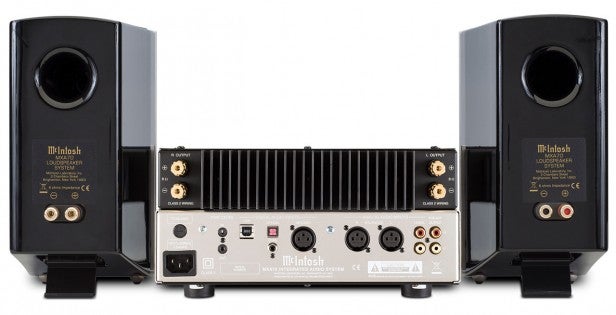 Around the rear are two pairs of speaker terminals, a balanced stereo input, a RCA stereo input, one USB socket, an S/PDIF optical out, a coaxial digital out, an AES/EBU digital socket and an RCA stereo pre-out. Plenty, in other words.

Sadly, there are no wireless connections, so you’ll have to add a streamer of some kind, or directly hook up a computer or CD player, which sort of negates the attraction of a seemingly one-box system. Thankfully McIntosh has its own very neat solution – the MB50 network player (£2,750) – which sits discreetly under the MXA70 and adds a wealth of Wi-Fi streaming options via DTS Play-Fi. 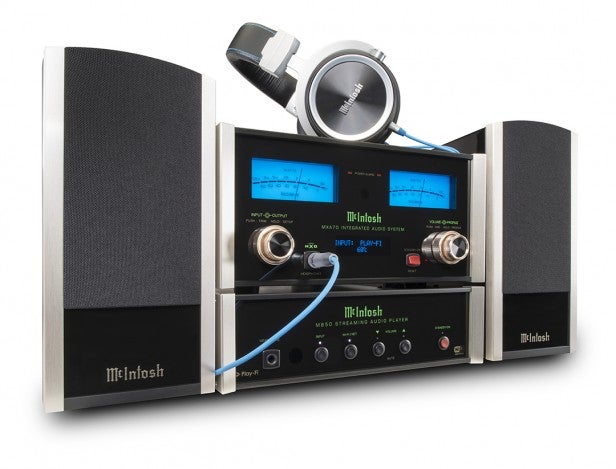 The remote control is definitely worth a mention. It may be made from the sort of anonymous moulded black plastic that remotes have been stuck with for decades, but the form is fun and rather striking.

Best of all, it can stand upright on a lightly curved bottom, gently rocking without falling over. (Note to self: Stop singing “Weevils wobble but they don’t fall down.”) I can’t help thinking it should have blue-backlit buttons to match the McIntosh aesthetic, though, and to help see what you’re pressing in a darkened room. 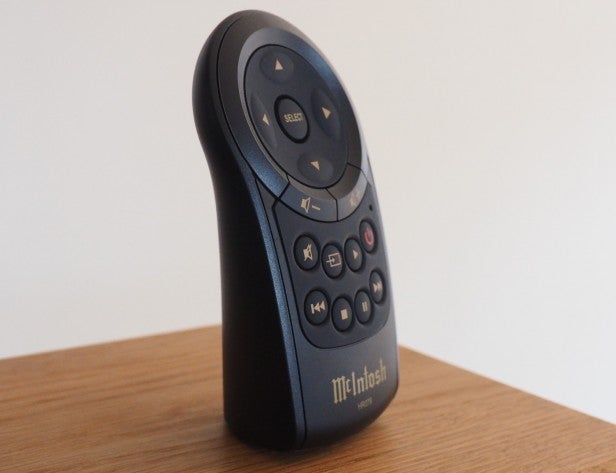 With the speakers set a decent length out from a wall – I found just under a foot to be best – the audio from this system defies belief. A hi-fi of this size has no business sounding this good.

It creates a soundstage that any high-end bookshelf setup would be proud of, the timing is impeccable and the treble is sparkly and sweet. Feeding it The Decemberists’ “What a Terrible World, What a Beautiful World” on vinyl, the airiness and lightness of touch was spot on.

Faster, dancier tracks also thump along joyously. There isn’t masses of bass, but what there is is tight and never detaches awkwardly from the mid-range.

I did try popping the speakers a little closer to the wall to reinforce the bass, but the effect on the rest of the sound was shocking. This system needs a little room to breathe.

Incredibly, those tiny speakers show no signs of distorting at truly monstrous volumes. If ever a piece of hi-fi punched above its weight, it’s this one.

The built-in DAC and headphone amplifier are also very impressive, meaning you’re unlikely to need to splash out extra for a separate unit to feed Hi-Res Audio files to your high-end cans. 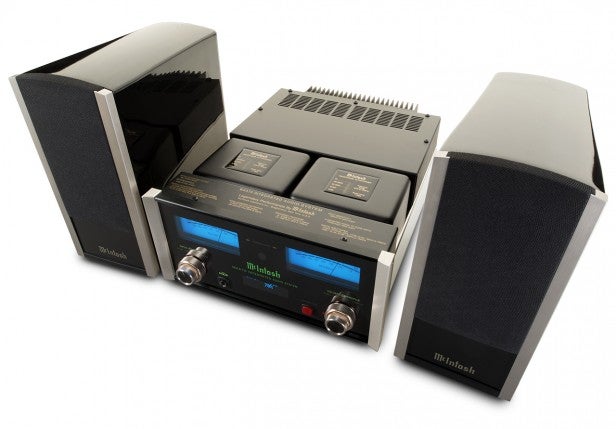 Should I buy the McIntosh MXA70?

If you’re a completist with a McIntosh main hi-fi system and want a space-saving solution for another room, or you just want a taste of McIntosh without spending a five-figure sum, look no further. For its size, it sounds wonderful and is built to last a lifetime.

But it still costs an enormous amount of money for what you get, and the lack of wireless connections seems a wasted opportunity. The addition of the McIntosh MB50 streamer makes it a more complete solution, but adds an enormous £2,750 to the overall cost.

A very slick micro system that offers a slice of that magical McIntosh sound, but could do with wireless connectivity to justify its outrageous price.