What is the Onkyo DP-X1?

You’d be forgiven for thinking this svelte black slab is a smartphone. It certainly looks like one. And, indeed, it does run on Android. But this is actually a Hi-Res Audio player from respected Japanese audio specialist, Onkyo.

More than that, the DP-X1 is the first pocket player to support the MQA (Master Quality Authenticated) audio codec. That’s kind of a big deal for on-the-go audiophiles. MQA manages to squeeze Hi-Res Audio into files no bigger than you’d need for CD-quality tracks, so you can fit a larger music library on to a portable player such as this.

Related: What is MQA?

Not that storage is necessarily a problem for the Onkyo DP-X1. Although there’s only 32GB internally, it has a pair of microSD slots that mean you can pump up the (storage) volume to a staggering 432GB.

Access to the Google Play Store for apps means it’s also capable of streaming and downloading from a wealth of services over Wi-Fi, and Bluetooth aptX adds further wireless versatility.

None of this comes cheap, however: you’ll need to splash out £599 before you’ve even thought about filling one of those microSD slots, or upgrading your headphones to a pair that are worthy of this magnificent media player.

The first word that sprang to mind when I picked up the DP-X1 was “solid”. It feels like it’s crammed with dark matter.

I was also a little surprised by its size. Having recently spent a lot of time with the Astell & Kern AK70, the DP-X1 seemed enormous by comparison. In width and thickness, it’s a smidgen bigger than most modern flagship phones, and only a tiny bit shorter in length.

The back and sides appear to be formed from a single piece of aluminium in a matte-black finish. It’s all very angular, aside from a pleasingly gentle scallop on the underside of the rotary volume knob. And that volume knob is a work of art – just one of many – with a knurled edge and brushed top that are finished in gun-metal grey, set off with a bare brass section where it meets the body. Sexy.

Other sumptuous touches include stylishly engraved script and icons, as well as gold-plated headphone sockets on the top. Yes, sockets, plural. Like the aforementioned Astell & Kern, the Onkyo DP-X1 has a 3.5mm jack socket and a 2.5mm output for balanced headphones. 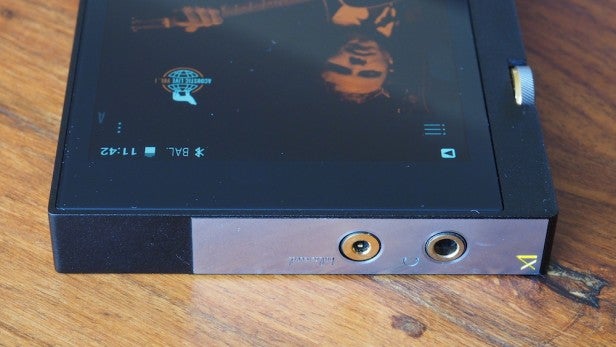 Down the right-hand side is where much of the action happens, with round metal buttons for power, play/pause, skip forward and skip backward, as well as a pair of microSD card slots. These slots can each accept up to a 200GB card, meaning you can theoretically jack up the storage to 432GB.

On the bottom is the Micro USB socket for charging and data transfer, and a microphone. Why a microphone? Well, although the DP-X1 can’t actually be used for phone calls, it can run almost any app an Android smartphone can, so you could perhaps use it for dictation or using Google Now for voice searches.

Talking of Android, the Onkyo is running version 5.1.1 – for now, at least – and with minimal change to its UI. If you’re familiar with Android, you’ll know exactly what you’re doing with the DP-X1. Sensibly, Onkyo’s placed its music app in the dock at the bottom, alongside Settings and the button that takes you to the app drawer. 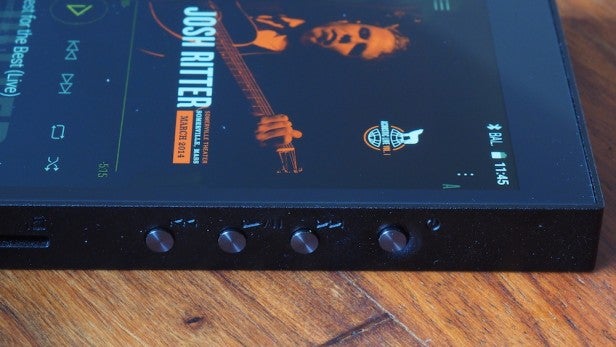 On the homescreen there’s the standard Google folder containing all of the search giant’s usual apps, plus a link to the Google Play app store and an intriguing icon for “Useful Apps”. The latter opens up a list of music service apps and remote-control apps for Onkyo and Pioneer hardware.

Along with MQA support, the ability to download standard Android apps, such as those for Spotify, Tidal and Deezer, really sets the Onkyo apart from the dedicated Hi-Res competition. Sure, those services don’t actually stream in Hi-Res yet, but sometimes you just want access to new music, regardless of file quality.

Internally, the Onkyo DP-X1 is blessed with not one but two ESS Technology Sabre ES9018K2M DACs, as well as two Sabre 9601K amps. Its 1,630mAh battery promises 16 hours of listening to Hi-Res Audio files.

The touchscreen is an impressive (for a media player) 4.7-inch 720p HD panel, with Android’s usual three virtual buttons at the bottom.

Loading up the DP-X1 with tunes is a simple case of dragging and dropping. Making it play nice with Mac required the Android File Transfer software, although you can bypass that if you’re loading up microSD cards via a card reader.

The Android interface is simple enough, although anyone not used to Google’s mobile OS might not know to double-drag the notifications bar from the top to get to the Quick Settings menu. I had no complaints with the 720p touchscreen – it’s as crisp and clear as you’d expect from a panel on any modern mid-range smartphone.

Onkyo’s own music app is pretty tasty, and enables you to browse your music by the usual criteria – artist, album, song, playlist and genre – as well as by composer, file directory and, more cleverly, by the file type. So you can easily find out which tunes you have in MQA format, or ALAC, FLAC, OGG and so on. It’s all very intuitive.

I did most of my testing through the class-leading Noble Audio Kaiser 10 custom-fitted earphones, as well as the Grado Labs GS1000e over-ears. The DP-X1 doesn’t seem to be at all fussy about partnering headphones, however, and didn’t have trouble driving any pair I connected. 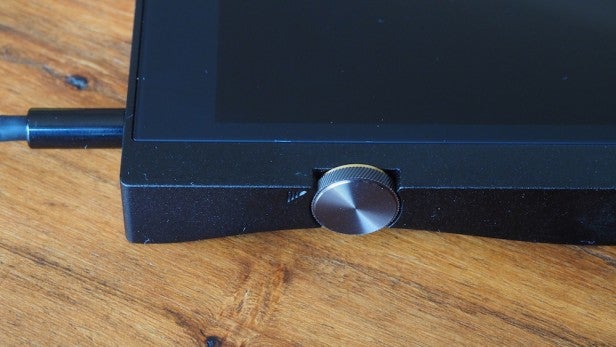 The sound quality of the DP-X1 is truly exceptional. Listening to Kimiko Douglass-Ishizaka’s 24-bit/96kHz recordings of Bach’s Goldberg Variations revealed that the Onkyo has the same impeccable timing and stop-start precision with notes as the Astell & Kern AK70, without being quite so overly bright. It’s a sound that’s totally unfatiguing.

Moving onto something a little more modern – Fleetwood Mac’s Rumours (24-bit/96kHz) – proved that the DP-X1 is just as adept with vocals and guitars. On “The Chain”, the kick drum had just the right sharpness of thud, while the twanging guitars flickered and shimmered beautifully just behind my ears.

As for the headlining MQA support, the tracks I had to hand confirmed that this is a truly exciting format for music fans. They exhibited all the same characteristics through the Onkyo, but without taking up so much of the precious storage space.

The DP-X1 is equally comfortable with non-Hi-Res content, though, making the very best of the lower fidelity instead of baring its frailties. With the live recording of Josh Ritter’s Acoustic Live Vol.1, the intricate finger-picking in “Galahad” is sensational, and the humour in Ritter’s vocals is perfectly captured through the vocals. You can almost see the twinkle in his eyes.

I found the claimed 16-hour battery life to be about right, although use of Wi-Fi and Bluetooth eats into it rather quickly. It has nowhere near the phenomenal stamina of the Sony NW-ZX100, but a little more than the Astell & Kern AK70. It’s easily good enough, in other words.

Should I buy the Onkyo DP-X1? 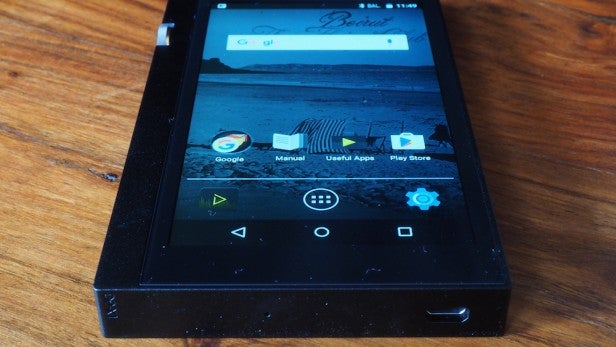 If you’re looking for an entry to Hi-Res Audio on the go, the Onkyo DP-X1 should be at the top of your list. It isn’t the cheapest – although it’s had a swift £100 price cut since launch – but what’s on offer for the money is exceptional. MQA support and the twin microSD slots give it a little futureproofing, too.

If you’re not worried about being limited to the Tidal and Moov streaming services and would rather have a smaller, lighter player, then the Astell & Kern AK70 is an excellent, cheaper alternative.

Another option is the excellent Chord Mojo, an external DAC/headphone amp that can turn your phone into a top-class Hi-Res Audio player – albeit as a rather more fiddly solution.

Probably the best portable Hi-Res Audio player you can get right now – and the most versatile.