What is the Moon Neo Ace?

The Moon Neo Ace is basically an entire high-end hi-fi system crammed into a single box. It boasts an integrated amplifier, Wi-Fi/Ethernet streaming, a Hi-Res Audio DAC, Bluetooth and a wide range of inputs for your other devices – including a moving-magnet phono stage for turntables. Just add speakers of your choice and away you go.

But this is no ordinary one-box system – Simaudio (the brains behind Moon) reckons this is one of the very finest all-in-one music players available, delivering the ‘world class’ sound quality for which Moon is renowned.

Of course, such sonic luxury is reflected in the savings-draining price tag, but given how much it would cost to assemble a separates system of this calibre, it could actually be seen as cracking value for money. Let’s find out if that’s the case. 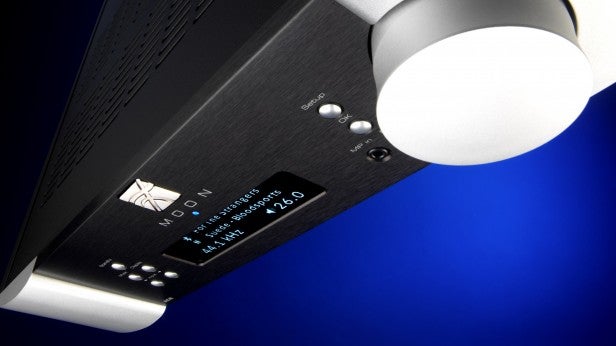 As you’d expect at this price, build quality is of the highest order. For starters, it’s remarkably heavy. I’ve tested AV receivers twice the size that weigh less, and the super-rigid bodywork feels like it’s been hewn from granite.

Looks-wise, you can tell this thing is aimed at audiophiles with its mildly esoteric, industrial vibe, but the curved silver side panels and brushed black faceplate lend a sense of elegance. The contrast works well, resulting in a very stylish and eye-catching unit.

Front buttonry is kept to a minimum – seven small silver keys cover stuff like input selection and setup, joined by a large volume dial on the right-hand side. Two sockets adorn the front: a 3.5mm minijack input and 6.3mm headphone jack. 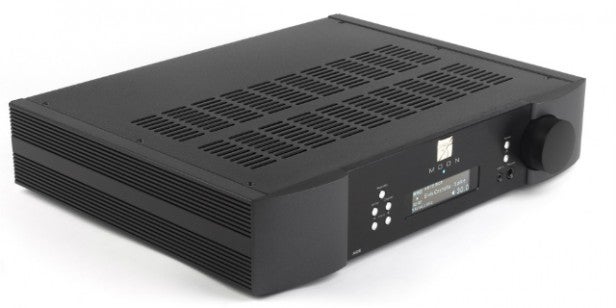 The detailed OLED display goes beyond the call of duty, throwing in little icons to illustrate each input. It’s bright, easy to read and packed with information. While streaming it displays the song title, artist, album, format and bit/sample rate, all without seeming cluttered. It’s also dimmable, should it become distracting in a dark room.

The rear panel is a treasure trove of connections, including three sets of analogue RCA inputs (one of which is a phono input with grounding screw), stereo pre-outs, four digital inputs (two optical, two coaxial) and a type-B USB port. An Ethernet port provides a more stable alternative to the built-in Wi-Fi, while the SimLink sockets allow you to control several Moon components at once. RS-232 and a Wi-Fi antenna input complete the line-up. 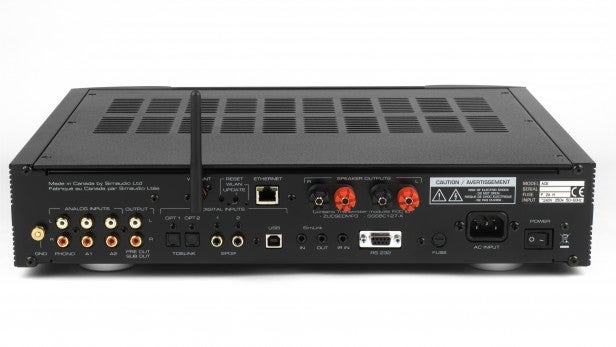 Elsewhere, the MiND (Moon Intelligent Network Device) smartphone app allows you to play and organise music from PCs and NAS drives on your network. It also offers native TIDAL playback, as well as vTuner internet radio. This impressive wireless functionality is topped off by aptX Bluetooth. 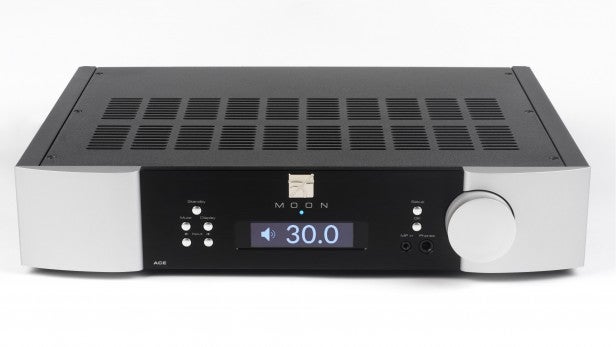 With such a wide range of functions to explore, the Moon’s simple, logical operating system is a real godsend. Central to this is the excellent OLED display, which sports a clear layout and legible text.

It houses a full setup menu, which can be accessed by pressing the Setup button on the front panel. Using the volume dial, you can scroll through lists of options and hit the OK button to select them.

Connecting the Moon to my router caused no problems, and using the volume dial to enter the Wi-Fi password proved easier than expected. It linked instantly and didn’t drop out once during the entire test.

No matter what you need to do, the Moon does it quickly and smoothly. It skips through inputs without delay, fires up online tracks instantly and finds NAS drives without fuss. Another nice (if trivial) feature is that the Moon doesn’t shut down the USB or network connection when you switch to another input, so you don’t have to start from scratch when you skip back.

If there’s a weak link here it’s the remote. It’s a nice size and looks stylish in its gloss black finish with flat translucent buttons, but it feels like something’s missing. For example, you can’t access or control the setup menu – that’s reserved for the front panel controls – and you can’t search network servers with it either. You also have to remember to press the ‘Amp’ button at the top, otherwise none of the buttons will work (something it took me an unnecessary battery change to realise).

Smartphone users will have more joy from the MiND app, which not only controls the unit but also lets you explore servers and streaming services. It’s simple and not too flashy – most of the menus are white text on black backgrounds and each page is clearly organised.

The structure is straight from the streaming app textbook. It starts with the usual list of speakers (or ‘zones’ in multiroom speak) where they can be renamed them or grouped together. Tap one and you’ll see two icons that let you jump back to the Home menu or explore music servers.

Dive into a NAS drive and the layout is excellent – albums are displayed in a grid with cover art, and it scrolls through huge libraries quickly. During playback, the format and bitrate is displayed and it offers all the controls you need (including the ability to edit the playback queue) but you can’t jump forward to your favourite part of a track. 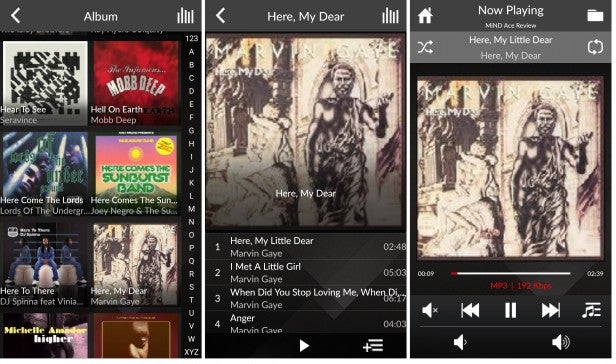 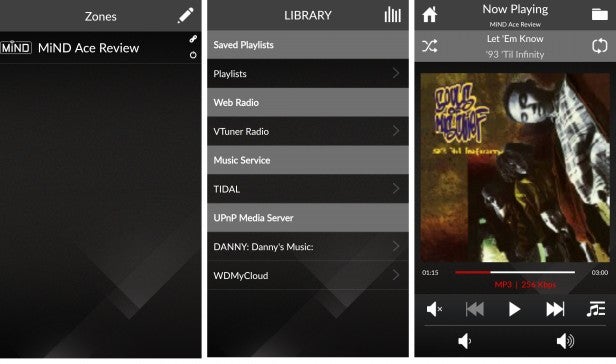 Let’s cut to the chase – the Neo Ace is a sublime performer. Its wonderfully transparent, open presentation makes anything sound amazing, from web radio up to Hi-Res Audio files. Any source, any quality – the Moon simply delivers. I continued using it long after writing this review, such is the addictive, satisfying nature of its performance.

Tunes are imbued with copious detail, while the solid midrange and tight bass add body and substance. It’s a smooth listen, revelling in slow, intricate genres like jazz and soul, but there’s enough dynamic kick to get you moving during more energetic musical moments.

The Neo’s sweet top end adds sparkle without ever sounding bright or hissy. Its solid, natural treble, adding texture and substance to the music. The Latin shakers, hats and effects in Naked Music’s Heroin Chic have plenty of air and space, while Lianne La Havas’ voice on Good Goodbye has rarely sounded more emotive or nuanced. 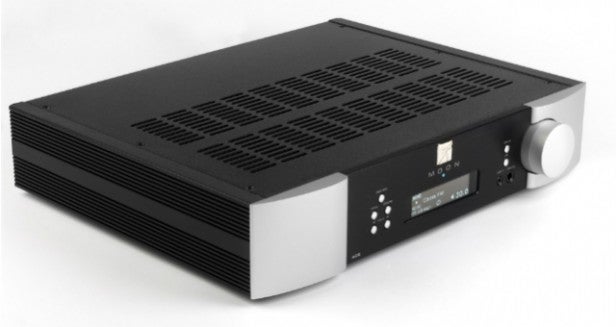 The Moon creates a wide, spacious stage with precise instrument placement and organisation. The way it involves and immerses you in a tune is utterly captivating, and something you won’t get from any budget all-in-one system.

The piano in James Blake’s f.o.r.e.v.e.r is solid and three dimensional. The Moon lends body to the subtle thud of the keys and defines every note clearly. Meanwhile, Blake’s voice oozes emotion thanks to the Moon’s lucid reproduction of his distinctive rasp and gentle sibilance.

Step things up a bit with a bit of rock or hip-hop and the Moon shows its more boisterous side. Kick drums and basslines are deep and punchy and there’s plenty of drive and attack behind rousing guitar and drum solos. Turn up the volume to room-filling levels and it doesn’t get flustered. Highs remain smooth and beautifully defined while bass retains its solidity.

I really can’t find anything to dislike about the Moon’s performance. Some listeners might fancy something a bit harder-hitting tonally, but that’s clutching at straws. Neo Ace is a top-drawer sound system in every respect and could be the best £2,800 you’ll ever spend. 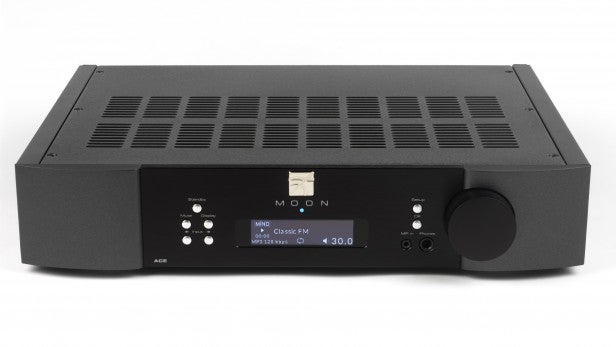 Should I buy the Moon Neo Ace?

If you’re looking for a clutter-busting hi-fi system that doesn’t compromise on performance, I’d recommend the Neo Ace in a heartbeat. Don’t be put off by the ‘all-in-one’ tag – this thing gives you all the clarity, transparency and dynamics of a high-end separates system, but for less money and with fewer bulky black boxes. I really can’t speak highly enough of it.

Play anything across the wide range of inputs – from Hi-Res Audio tracks down to internet radio streams – and you can rest assured that the Moon will make it sound great. The sound is insightful and open with an inherent smoothness that’s hard to resist – but there’s muscle and attack when required.

What’s more, it’s built like a tank, easy on the eye and a doddle to use thanks to the OLED display and superb MiND smartphone app. Basically, if you’re serious about music, you need one in your life.