What is the Chillblast Fusion Fury Nano?

The Chillblast Fusion Fury Nano addresses some of these concerns with exciting new hardware. This is the first time I’ve seen an AMD Radeon R9 Fury Nano deployed in a PC, which means this system should be able to achieve unprecedented performance for this size of system. 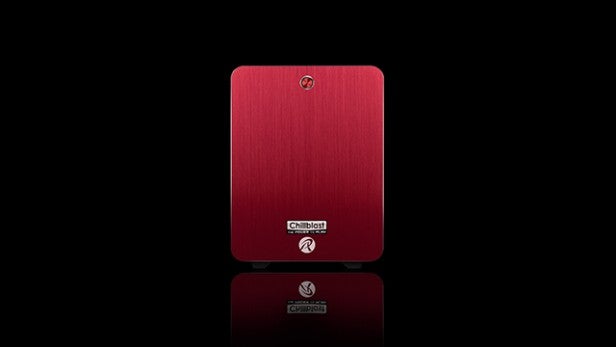 The high-end hardware is slotted inside a Raijintek Metis chassis. It’s one of the smartest of the small PC cases I’ve seen. The outside is made from brushed metal with shiny, bevelled edges, and it’s available in several colours. Chillblast has chosen a red chassis in honour of AMD, but the Fusion Fury can also be ordered in green, blue and gold as well as conventional silver and black.

The front panel of the chassis is disturbed only by subtle logos and the modest, illuminated power button. The interior is visible through a small side window.

It takes the removal of only a few screws for the side panels to slide away, and the top and bottom panels are just as easy to take off. Once inside, you’ll see that there are no shrouds or coverings, which means that all the major components are accessible as long as you’re happy to move a few other parts out of the way first.

The case’s dimensions mean that there isn’t much room to spare inside, however it’s still organised sensibly. The power supply sits vertically at the front of the chassis with an extension cable to its plug at the rear. The motherboard is installed upside-down, which means the graphics card is near the top of the case. Chillblast has done some light modding, with a hole cut in the top of the enclosure to ensure the graphics card gets enough air.

Most of the chunky power supply cables are lashed around the side of the chassis and stored in an empty space above the PSU. This leaves greater room around the graphics card and the centre of the case, which is helpful for airflow. The middle of the build is dominated by the Corsair Hydro H75 cooler, which chills the processor and comes with two 120mm fans.

Build quality is good. The side panels aren’t thick but they’re strong, with very little flex, and the base and lid are similarly sturdy.

However, the cramped interior provides barely any room to grow. There’s room for one additional 2.5in drive, but that’s it. Connectivity is better on the outside: there are two USB 3 ports at the front of the machine, six more around the back, a PS/2 connector and five audio jacks.

The Chillblast looks impressive when lined up against rivals from Alienware and Syber. The Fusion’s 277mm depth and 254mm height make it smaller than the Alienware X51, which is 318mm deep and 343mm tall. It’s just as sturdy as the X51 and easier to manage; the Alienware machine was hampered by components hidden beneath various shrouds.

The Nano is smaller than the Syber Vapor I, which is 358mm wide and 344mm deep, and in my opinion, it looks better. I prefer the Chillblast’s brushed metal to the Syber’s multi-coloured plastic. Both machines are similarly manageable, though, with accessible interiors. 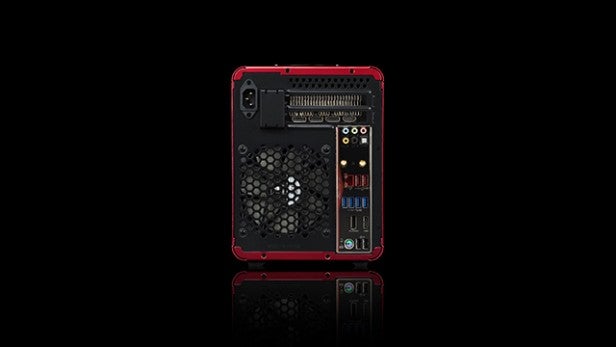 The Radeon R9 Fury Nano is one of the most exciting graphics cards in years. It’s made from the same Fiji core used in full-sized flagship cards such as the Fury X, and AMD has only made a few tweaks to cram the silicon into a tiny, six-inch enclosure.

The 1,050MHz clock of the Fury X now sits at 900MHz, and the core uses four VRM phases rather than six. AMD has also maximised efficiency by hunting through its wafers to find the most frugal Fiji cores – and only those become Fury Nano cards. The whole lot is cooled by a hybrid vapour-chamber and air-cooling unit.

The Nano benefits from AMD’s High Bandwidth Memory. These chips sacrifice clock speed to ramp up the bus width to eight times the size of conventional high-end cards. That allows far more data to flow through the memory at once. The 500MHz speed of the Nano’s memory may look slow, but it’s able to process far more information than more traditional GDDR5. Right now, High Bandwidth Memory can’t go beyond 4GB, so that’s what’s installed here.

The potential performance of High Bandwidth Memory can be seen in throughput figures. The Fury’s memory bandwidth is a stonking 512GB/sec – higher than the GTX 980’s 224GB/sec throughput. That’s important, because the GTX 980 is the best card available in any of the Chillblast’s rivals.

The Nano’s theoretical figures are great elsewhere. The Nano’s single-precision processing power of 7,168 GFLOPS is far beyond the GTX 980, which topped out at 4,612 GFLOPS.

The rest of the specification is similarly impressive. The Core i7-6700K processor is one of Intel’s best Skylake chips, which means it has an architecture whose prime focus is on reducing heat and power consumption. I has four cores ordinarily clocked to 4GHz, and here they run at 4.6GHz thanks to some enthusiastic overclocking.

Chillblast has been clever with its storage. Windows 10 is installed to a 256GB Samsung SM951 SSD that uses the tiny M.2 socket attached to the rear of the motherboard. Further storage comes from a 1TB hybrid mobile drive that uses the svelte 2.5in form factor. 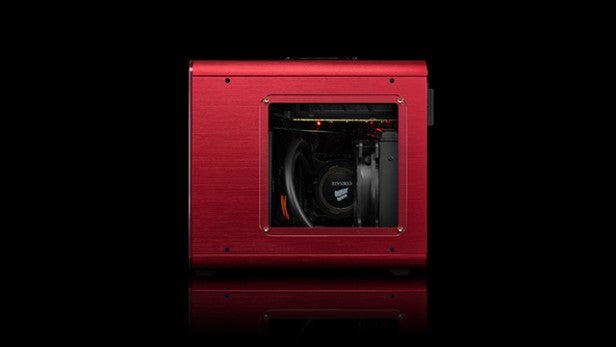 That said, the mini-ITX form factor does prove restrictive. Its spare SATA ports aren’t much use when there’s almost no room for additional storage. The board only has a single PCI Express slot and pair of memory sockets, and they’re already occupied.

It’s an impressive specification that takes the fight to rivals. The Alienware X51 has a similar processor, but it’s held back with poorer storage, memory and graphics.

Syber’s systems are closer competitors. They’re configurable with Core i7 processors – albeit from Intel’s previous generation – and their most expensive configurations come with Nvidia GeForce GTX 980 graphics, although I reviewed a model with a GTX 750 Ti card. The Syber machine can also be fitted with the Fury Nano, and they have ample versatility for memory and storage switching.