For the last few years, Canon has not been top of the heap for value, even if it has maintained its tradition of quality. But the LEGRIA HF M56 can now be found for less than £500, and even below £400 from some vendors. Yet this is a distinctly feature-rich model with the specifications for very good video performance.

The M56 is very closely related to the LEGRIA HF M52 we reviewed a few months ago. It boasts a generously sized 1/3in CMOS, which Canon calls a HD CMOS Pro. It has 2.37Mpixels, with 2.07Mpixels used for video. This doesn’t bode well for still images, which can only be captured at 1,920 x 1,080, but has excellent implications for video. The resolution is exactly the same as Full HD, so each sensor pixel can be as large as possible, which will maximize low light performance. This is the same sensor technology Canon uses in its professional camcorder models, as well as high-end consumer models such as the LEGRIA HF G10.

Video format options include AVCHD all the way up to Full HD at 24Mbits/sec. But there are also two MP4 formats available. Both shoot at 720p, at either 5 or 9Mbits/sec. If you’re shooting exclusively for sharing over the Web, these options make a lot of sense. One area where the M56 does differ from its M52 stable mate is in the amount of on-board memory. Where the M52 offers a capacious 32GB, the M56 only sports 8GB. This will still be enough for 45 minutes of footage at the top quality setting, but you will want to stock up on a decently sized SD card. 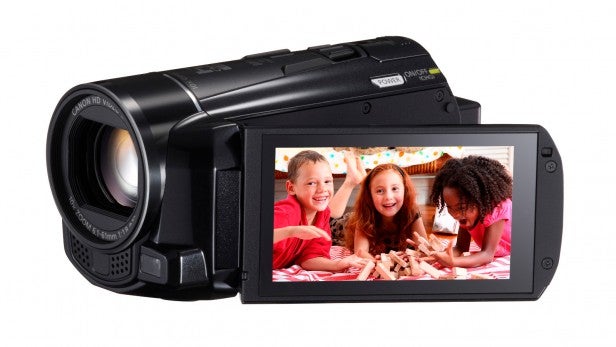 The range of features is identical to the M52, with some useful capabilities but not to the level of premium models aimed at enthusiasts. There’s a 10x optical zoom, and Canon doesn’t offer any Advanced option between this and the 200x digital zoom. This isn’t surprising, as there are no spare sensor pixels to call upon. Image stabilisation is Canon’s well-regarded optical system, but it now has four different modes. There’s Dynamic for shooting whilst walking, Powered for smoothing out the higher-frequency vibrations experienced when zoomed in. But there’s also a tripod mode when no stabilisation is necessary, and a Macro IS mode when shooting close up. The camera will detect which of these modes is most appropriate and set itself accordingly.

A selection of fun graphical widgets has been included. You can draw on the image as you record, add animated patterns or a custom time stamp – all things we would recommend leaving until the editing stage. Canon provides a discrete button for calling up the main menu, but everything else is accessed via the touchscreen. There is touch focusing and exposure, which will track the point you select. You can call up onscreen zoom and record controls as well. However, whilst the zoom controls are conveniently placed on the left of the LCD, the record control is on the right, which is a bit harder to reach.

There are a few concessions for the enthusiast. Whilst there’s no lens ring or manual control knob, quite a few settings are available once you delve into the menus. There’s even an accessory shoe, although it’s Canon’s proprietary “S” Mini Advanced Shoe so won’t fit anything except Canon’s own peripherals. There’s no microphone minijack, but the multi-function AV minijack doubles as a headphone output so you can monitor audio levels, and audio level controls are available in the menu, as well as audio scene modes, which provide volume and equalisation presets. 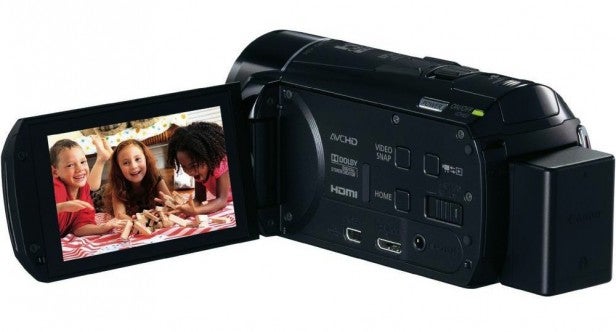 In manual mode, Canon’s usual array of priority modes appears, plus the ability to select scene modes. You can adjust shutter or iris, although not both at the same time. However, there is a generalised exposure that is available in either mode, which does effectively give you independent control. All of these are accessed exclusively via the touchscreen LCD. You can even call upon Canon’s Image Effects, which provide adjustments for colour depth, sharpness, brightness and contrast. The range of values is not extensive in each case, but it’s still amazing to see this level of control on a consumer-grade camcorder. The Cinema mode lets you apply a film look to your footage as you shoot, too.

The M56 also sports the same WiFi abilities as the M52. These aren’t anywhere near as elaborate as those offered by JVC’s HD Everio GZ-GX1 and HD Everio GZ-EX215. You can’t control the camcorder remotely over WiFi, and you can’t stream live video. Instead, you can set the camcorder up on your wireless network and then access it as a DLNA server. You can then browse its memory contents via any DLNA-compatible client and watch the clips you have recorded. For example, we were able to watch videos using CyberLink’s PowerDVD 11, VLC Media Player 2 and Windows Media Player. However, MLPlayer Lite on an iPhone would only play footage recorded in MP4 format, as it didn’t have the codec support for AVCHD. 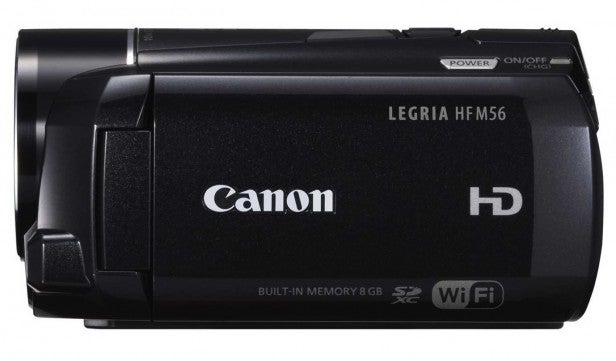 With its HD CMOS Pro, the M56 truly excels in image quality. In bright conditions, colours are rich and vibrant, but still faithful. The level of detail is also excellent, although in this area Panasonic’s top premium camcorders just have the edge. But in low light there’s little to separate the two manufacturers, with the M56 providing a grain-free picture even at poor levels of illumination. Essentially, this is premium-grade video quality for a much more mid-range price.

Verdict
If you can find the Canon LEGRIA HF M56 for under £400 as we did at the time of writing, you’ve got yourself an absolute bargain. For this price, image quality is truly excellent and the range of features is very good. Although the WiFi DLNA media server options are potentially useful, it’s really the core capabilities that make this such a good choice. For over £500 it would be outclassed by JVC’s HD Everio GZ-GX1, but at the current price it’s a great mid-range option.