The Canon HF10 and HF100 were the cream of the premium camcorder crop a few years back, but since then the company’s top-end models have been priced too far beyond the competition. The LEGRIA HF G10 costs a little over £1,000, so it’s still more expensive than the top models from competitors. But it has a trick or two up its sleeve which could warrant the extra price.

Central to this is the G10’s HD CMOS PRO. This is the same sensor used, either in singular form or as a trio, in Canon’s professional range of camcorders. It’s a 1/3in sensor with a gross 2.37Mpixels, of which 2.07Mpixels are employed when shooting video. This may seem meagre, when compared to the megapixel monsters found in some consumer-grade camcorders. But if your main focus is shooting video, it’s ideal. The resolution of Full HD is 2.07Mpixels, so there is pixel parity between the sensor and shooting format. This also means each pixel can take up as much area as possible, which should be good for low light performance.

Video is recorded in standard AVCHD format. So the resolution is either anamorphic 1,080p or Full HD, and data rates range up to 24Mbit/sec, the maximum available from the non-2.0 version of AVCHD. There are interlaced 50i and progressive 25p options, but no 50p, as this is not part of the original AVCHD standard. The G10 comes with 32GB of memory on board, enough for around three hours of recording, even at the top quality setting, but there are two SDXC-compatible slots available if you need more. With a 64GB card in each there would be space for 15 hours of footage.

With its relatively large sensor, the G10 only offers a reasonable 10x optical zoom. Canon does allow you to augment this with a 2x digital teleconverter option, but this reduces quality in a similar fashion to a digital zoom with this camcorder, because there are no extra sensor pixels available. So you’re best off ignoring this unless absolutely desperate. The image stabilisation, however, is optical and pretty impressive. There are three modes, with Dynamic and Powered options alongside the Standard setting. Whilst Standard mode is general purpose, Dynamic mode is optimised for low frequency motion such as when shooting whilst walking, whereas the Powered mode smooths high-frequency vibrations, so is more effective when shooting handheld at full zoom factor. Both are pretty effective, particularly the Powered IS.

The G10 is packed with manual controls. Our most major criticism of the HF10 and HF100 was their lack of a lens ring, which Canon only partially addressed in their LEGRIA successors. The latter, such as the LEGRIA S21 only offered a control knob, which wasn’t sufficiently responsive for the important task of focus pulling, where you rapidly change from one focal point to another. 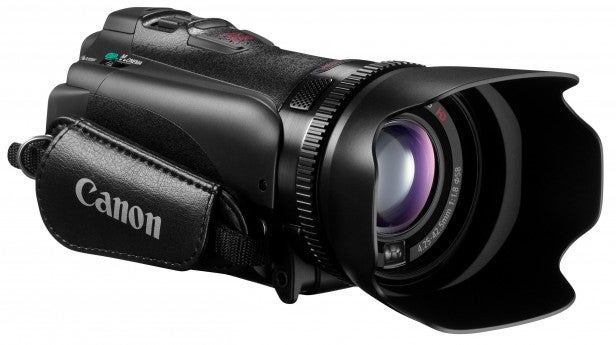 The G10 sees the welcome return of a lens ring on a Canon camcorder. It is exclusively reserved for manual focus, but there’s also a supplementary dial on the rear of the device with an assignable function button. This can be set to trigger either the general combined exposure control, shutter or aperture priority modes, Automatic Gain Control limit or fully manual operation. With the latter, each press cycles through the options of shutter, iris and gain.

There are two further buttons on the left edge of the 3.5in LCD panel. By default, these respectively toggle manual focusing (enabling the lens ring) and enable the Power IS whilst depressed. However, both can be user configured with a range of functions, such as backlight compensation or face detection autofocus, depending on your shooting preference. The remainder of the functions are accessed via the touchscreen. The main features are ranged into an array of large icons spanning two menu screens, and options include touch focus and exposure. Further settings can be found in a full menu. 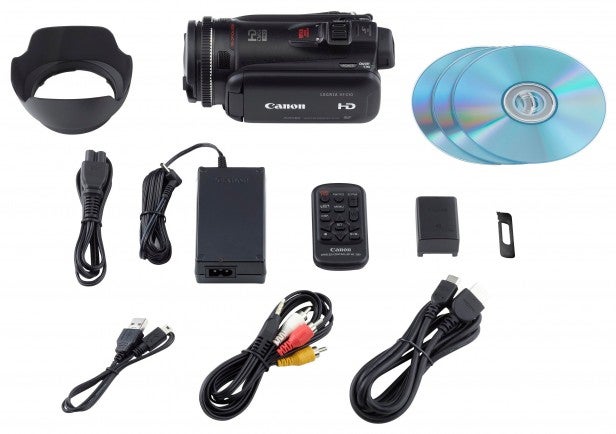 You can also call up onscreen controls for zoom and focus, but whilst the zoom is operated conveniently from the left edge of the panel, the record button is in the bottom right-hand corner, making it rather hard to access. Overall, though, Canon has made all the most important functions accessible via discrete buttons. So once you have set the assignable functions the way you want, you won’t have to use the touchscreen very much.

Unfortunately, the G10 does have one chink in its armour for serious videomakers. Whilst minijacks are available for an external microphone and headphones – the latter doubling as the analog AV output – the accessory shoe is Canon’s “S” Mini Advanced Shoe, so is only compatible with Canon proprietary peripherals. This means you won’t be able to mount a standard video light or microphone on the camcorder body, which will be a hindrance if you want to use this camcorder as a professional stand in. You can buy adapters that convert it to a standard hot shoe but these aren’t all that easy to use and are much less secure. This is a particular shame when pretty much everything else is in place for serious video production. Our only other quibble is that the power supply will only charge batteries when they are installed in the camcorder, not separately. So you can’t leave a second battery on charge whilst you go out shooting. 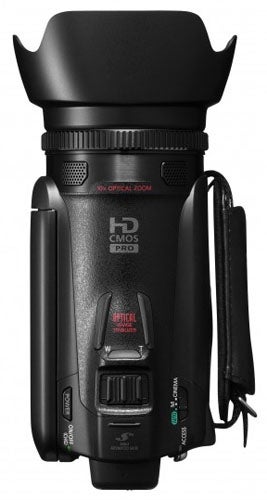 Canon’s high-end camcorders have always competed well on image quality, and the G10 is a tour de force in this respect. In good lighting, colours are saturated and extremely accurate. If we were to pick holes, there is a slight lack of detail compared to the very best in class – such as Panasonic’s HDC-TM900 – but overall the performance is excellent. Where the G10’s HD CMOS PRO particularly shows its strength is in low light. In short, this is the best performance we’ve seen from a consumer camcorder in poor illumination. The image in our 100W ceiling light test actually looked brighter than the naked eye, and colours were still accurate and saturated, with no sign of grain at all. Again, there’s slightly less detail than the best competitors, but overall we would choose the G10 in low light because its colour, brightness and lack of grain are so very good.

Verdict
Canon’s LEGRIA HF G10 is close to being a perfect camcorder for video enthusiasts or professionals looking for a second unit for quick handheld work. Only the lack of a standard-sized accessory shoe and the price let it down. These two factors mean this camcorder doesn’t quite grab our very top recommendation. But it shoots great-looking video, particularly in low light, and has supremely easy manual control, making this a very tempting proposition.