When we reviewed JVC’s HD Everio GZ-EX215, we were impressed by its wireless abilities, but a little surprised to see that they had been partnered with essentially an entry-level camcorder. But this isn’t the only model in JVC’s latest range to sport the same WLAN functionality. The JVC HD Everio GZ-GX1 combines this with much more capable camcorder specifications.

Where the EX215 has a small 1/5.8in CMOS, the GX1 uses a large 1/2.3in CMOS, which similarly sports back-side illumination to boost sensitivity. It also offers a hefty 10.62Mpixels, although JVC adds a small amount of interpolation to allow still images up to 3,968 x 2,976. Video is recorded at Full HD resolution in AVCHD format, with data rates up to 27Mbits/sec. There’s a 50p mode, too.  No memory is built in, just a single SDXC-compatible card slot. With a 64GB card installed, there will be room for five hours of footage at the top quality setting. 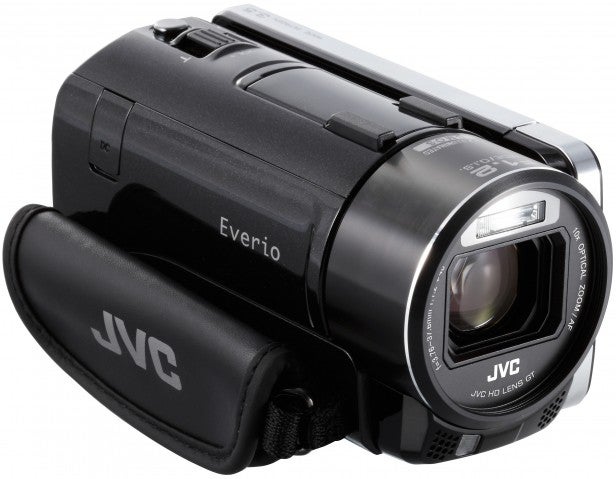 The optical zoom is a decent but not outstanding 10x, which can be increased to 15x with the dynamic option enabled. This takes advantage of extra CMOS pixels to boost the factor without losing resolution. However, with image stabilisation enabled the dynamic zoom mode drops to 13x. The image stabilisation is optical, but has been branded Enhanced Advanced by JVC. It has three modes, depending on whether you’re using the camcorder handheld with high zoom, or wide angle whilst walking.

There are plenty of features here for the videomaking enthusiast. A standard-sized accessory shoe is located on top, with a plastic panel to protect it when not in use. So you will be able to attach a host of third-party accessories. There are minijacks available for an external microphone and headphones, with the ability to adjust audio levels in the main menu. 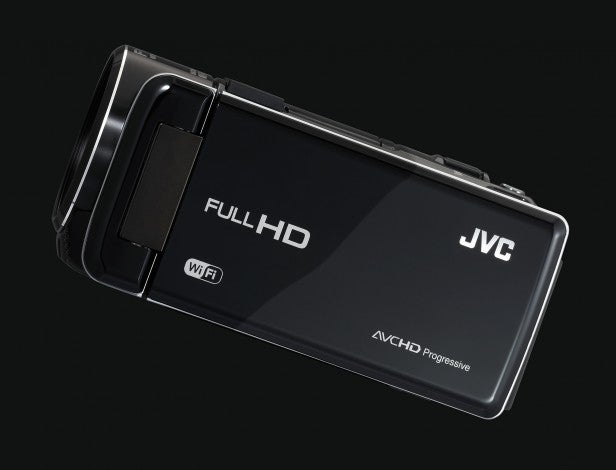 You don’t get a lens ring or any kind of physical adjustment knob, though, and discrete control buttons are few and far between. Virtually all settings must be accessed via the touchscreen, and JVC’s menu system does its best to hide the GX1’s abilities from novice users. The main menu foregrounds the wireless functions, alongside controls for the smile shutter and smile name detection systems.

There is also direct access to the GX1’s strange animated drawing
facilities, which go even further than earlier versions. You can add an
animated particle stream, such as floating hearts or snow, end even add
hats, glasses or facial hear to your subjects. There’s a facility to
draw onscreen as you record – and a stylus included in the box to help
with this. You can stamp symbols in the frame, too, such as hearts
(again).

All of this hides the fact that the GX1 actually hosts quite a fulsome selection of manual controls. There’s a small complement of scene modes – more than some of JVC’s current budget models can boast, but not as extensive as some manufacturers offer at this price level. You can adjust focus and white balance, with auto and manual modes plus the usual indoor and outdoor presets, but a couple of underwater options too. There’s a general brightness control plus shutter speed and a separate aperture priority mode. There are some useful extra modes, including time-lapse recording with intervals of one to 80 seconds, and a high-speed recording option. Sadly, all of these are found in the full menu, so take a few screen presses to get to. But at least the facilities are there if you want to use them.

This brings us back to the wireless functionality, which is as extensive as that provided by the EX215. There are essentially two sides to this. First, you can hook the GX1 up to an existing wireless network, but this requires entering details into a very fiddly system of menus, as well as the details of your email service if you want to use the features on the camcorder that require these. Once you have set this up, you can access the camcorder across your WLAN with a Web browser, preview and watch footage and pictures from the camcorder’s memory, and even control recording and zoom. There are apps for iOS and Android that offer most of these facilities in a self-contained format. You can also record clips of a fixed length and send them to an email address you have set up beforehand, directly from the camcorder itself. There’s a motion detection ability, although this doesn’t trigger video, just taking still images. But it could still come in pretty handy for keeping an eye on your house when you’re out, or for other forms of unattended surveillance.

Alternatively, it’s possible to set the device up as a wireless access
node itself. You can then connect to its mini wireless network with your
WLAN-equipped mobile device, using the passcode on the GX1’s screen.
After this, the Web browser, iOS and Android apps can be used as before,
giving you much more sophisticated wireless control facilities than the
supplied IR remote. If you’re an avid video blogger, these abilities
will make the GX1 much more useful than other camcorders for recording
yourself.

JVC’s budget camcorders generally impress us with their
image quality, particularly in low light, and its higher-end models
don’t disappoint either. The GX1’s premium CMOS provides truly excellent
image quality in every condition. With optimal lighting, colours are
rich and detail is excellent. Performance is even more impressive in
poor illumination. Colours are surprisingly accurate in low light, with
no sign of grain and plenty of fine detail. Overall, the GX1 more than
lives up to its specification.

Verdict
The JVC HD
Everio GZ-GX1 is a more appropriate combination of extensive wireless
abilities with a premium camcorder than the EX215. Like the latter,
though, you don’t seem to be paying significantly extra for these
features. This isn’t quite an enthusiast’s choice – the lack of discrete
controls for the manual settings puts paid to that. But there’s still a
wealth of features here, allied with excellent image quality, making
this a good choice if you primarily want premium point-and-shoot
abilities, but occasionally need that little bit more control – with
wireless functions a major added bonus.