Canon’s camcorders have always focused more on quality than gimmickry. But the LEGRIA HF M52 has a foot in both camps. On the one hand, it has built-in wifi and the ability to act as a streaming video server. But it also incorporates a professional-grade sensor, as used in the excellent LEGRIA HF G10 and Canon’s professional XA10. So is this the best of both worlds, or a bit of an identity crisis?

First, let’s look at the core specification. The professional sensor is Canon’s HD CMOS PRO, a 1/3in unit with a gross 2.37Mpixels, 2.07Mpixels of which are used when shooting video. This is a lot less than most consumer camcorders now offer, but it has one important advantage – there is one pixel on the sensor per pixel of video. Taking into account the way CMOS sensors are constructed, this means each pixel can be as large as possible, for maximum light sensititivity. The one downside of the professional CMOS is that its low resolution means this is not a great camcorder for still images, which can only be grabbed at 1,920 x 1,080.

The recording formats are more consumer-oriented, however. Canon hasn’t adopted AVCHD 2.0 yet, so data rates range from 5Mbits/sec to 24Mbits/sec. You can use either 50i or 25pf, with the former being regular interlaced video and the latter a progressive signal recorded into an interlaced format. But there are also two other recording modes available. The first records AVCHD but with shooting tips for different types of activity such as travel, parties, or blogging. For example, with the party option you’re given suggestions of questions to ask people, activities to record, and the recording duration to use. Clips are then recorded into the categories. But there’s also a MP4 mode which records at 720p resolution and uses either 4 or 9Mbits/sec, with a 30-minute clip length limit. This is designed to be more readily compatible with Internet upload, but also the M52’s streaming video capability, of which more later.

The M52 isn’t badly endowed for enthusiast features, either. There’s no lens ring like the LEGRIA HF G10, or even a dial. All functions are accessed via the touchscreen LCD. But there is a healthy range of settings available here. In auto mode, these are somewhat restricted. There’s the slightly bizarre animation system, which lets you add patterns to your video or draw on it whilst it’s being recorded. There are scene modes for audio, as well, offering presets for situations such as recording music, speeches or in cars. You can call up onscreen controls for zoom and toggling record, although the latter is rather inconveniently on the side of the LCD nearest the camera body, so not tremendously accessible. 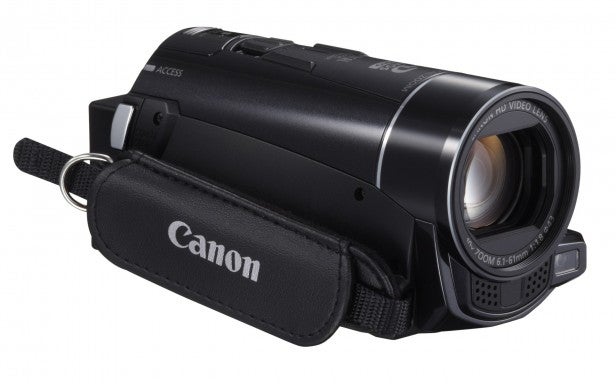 Image stabilisation now comes in four forms, and the camcorder will make the choice for you. When Powered IS is enabled, the camcorder will switch into this mode if you zoom in, as this mode smoothes out the fine vibrations of hanheld shooting at telephoto extremes. Zoomed out, the Dynamic mode is chosen, for shooting whilst walking. But if the camera detects that it’s complete steady, it will switch to Tripod mode, and there’s a Macro IS mode best suited to shooting objects up close, too.

Switching to manual reveals Canon’s signature shutter and aperture priority modes, plus the usual array of scene presets. There is no direct control of both shutter and iris simultaneously, but the manual exposure setting provides the next best thing. There is an Image Effects menu where you can tweak colour depth, sharpness, contrast and brightness for the image. If you turn off the audio scene modes, it’s possible to adjust audio levels manually as well. Both focus and exposure can be adjusted via touchscreen buttons or by touching a point in the frame. In manual mode, the image stabilisation will not detect which setting to use automatically, and you only get to choose between Standard, Dynamic and Powered. The Tripod and Macro options can’t be selected. 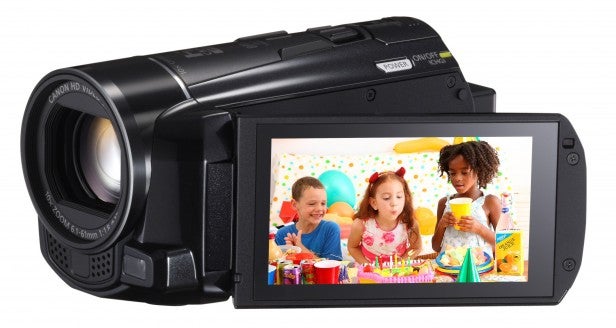 One more shooting mode is available, called Cinema. This provides nine different film looks, such as flickering old movies, cool or vivid. This mode also allows many of the manual controls to be used at the same time, such as the aperture and shutter priority options, but not scene modes nor the image effects.

There are even minijacks available for hooking up an external microphone and headphones, although the accessory shoe is Canon’s proprietary “S” Mini Advanced Shoe. This will only accommodate Canon peripherals unless you purchase a third-party adapter, which won’t be a particularly sturdy attachment.

So, finally, we come to the M52’s most unique feature. The M52 isn’t the first camcorder to include wireless connectivity. Sony added Bluetooth to a few of its camcorders some years ago. But this is the first we know of to integrate wireless and DLNA in one. Once you have entered the settings for your wireless network, or configured this automatically using the WPS facility, you can call up the DLNA server. This will then appear on your network as an AV streaming device. We managed to stream both AVCHD files and MP4s to a PC running CyberLink PowerDirector 11 and VLC Media Player 2, but our test iPhone app, MLPlayer Lite, would only play the MP4s, which is presumably one reason why this option is offered. 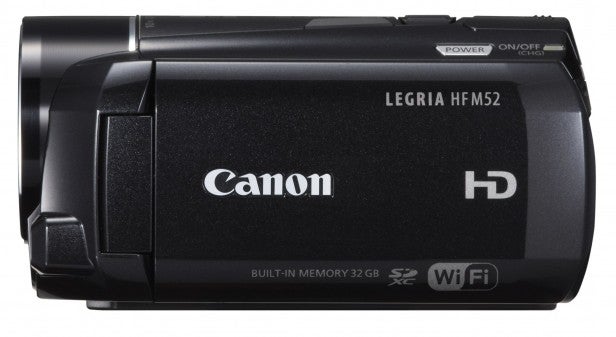 It’s a bit of a missed opportunity that Canon hasn’t also made it possible to stream video live from this device. A built-in webserver or partnership with Bambuser would have made this an incredible Internet camcorder, like the model Flip was rumoured to be about to release just before Cisco closed the brand, only with better camcorder abilities. But the DLNA features are nevertheless quite impressive. 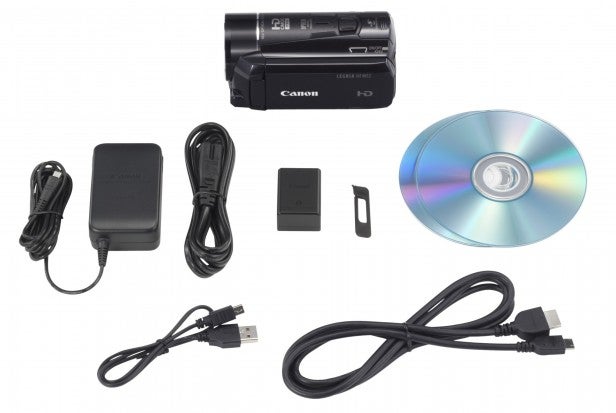 With its professionally derived sensor, the M52 provides seriously good image quality. Colours are vivid and vibrant, and there’s plenty of fine detail. Footage has a very slight lack of sharpness compared to Panasonic’s top-end models such as the HC-X900, but otherwise this is one of the best performances we’ve seen from a consumer-grade camcorder. Low light capabilities are similarly impressive, with the image remaining bright and colourful down to low levels of illumination. The M52 aced our 100W ceiling light test, for example. Best of all, there’s no sign of grain, implying that the M52 is not using aggressive levels of video gain to achieve this quality.

The LEGRIA HF M52 is a slightly curious model for Canon. We usually associate the more adventurous camcorder features with Sony, such as the projector built into the https://www.trustedreviews.com/sony-hdr-pj10e_Camcorder_reviewhttps://www.trustedreviews.com/sony-hdr-pj10e_Camcorder_review HDR-PJ10E and the GPS receiver integrated into a number of units. But Canon has managed to combine leading image quality with a reasonable set of features, plus the unique video streaming capabilities. The resulting price is quite high, but otherwise this is an accomplished little camcorder.