JVC has never been afraid to do things a little differently from other mainstream camcorder manufacturers. The JVC HD Everio GZ-EX215 incorporates Wi-Fi connectivity, but uses it in a rather different way to the other wirelessly enabled camcorder we have reviewed, Canon’s LEGRIA HF M52. Where the latter can moonlight as a DLNA home media server, JVC has a broader and more varied range of options for the EX215’s Wi-Fi.

For a start, where Canon’s model must be set up to sit on an existing wireless network, the EX215 can act as a standalone wireless access point, allthough not one which can form a bridge to another network. You set the EX215 into the Direct Access mode, where it creates its own wireless network, then connect another device to the local wireless network it creates, entering the passcode provided. This mode is designed to be used in tandem with the Everio Sync app, which is a free download for iOS or Android. 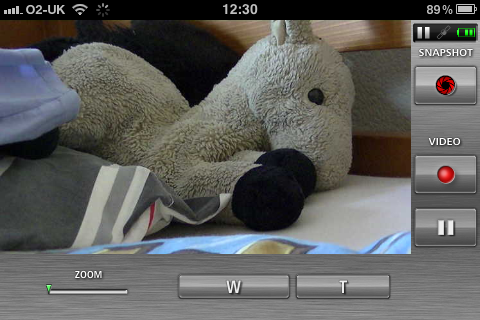 But that’s only the beginning for the EX215’s wireless abilities, although the remaining facilities are a little more complicated to set up. You can also connect the camcorder to an existing wireless network that is hooked up to the Internet. Then, you will really need to know the exact details of your email account as these must all be entered on the camcorder’s menu, including the port number if this is non-standard. But it’s worth it, because EX215 will then allow two particularly fun features.

First of all, you can send video emails. The main menu has an icon for this, which calls up the mode. When you hit record, you’re given a five-second count down, so you can take your place in front of the camera. Then a fixed amount of video is recorded (15 seconds by default), after which you can choose to send the clip to an email address you nominated in the setup process. A similar facility is provided by the detection system. This can be set to send a picture when motion is detected, or when a human face is detected. So you can use the camera as a security system, or a creepy surveillance system, depending on how you look at it.

There’s a lot of set up required to get these two facilities to work, but fortunately, another feature you can use with the EX215’s own built-in wireless access point can make life easier: a Web interface for the main settings. You connect your wireless device, which could also be a notebook, to the EX215’s WLAN, then enter the IP address provided into your browser, and you can configure the various parameters for mail servers and passwords, which is a lot less fiddly and prone to mistakes than using the camcorder’s LCD panel.

You can also set the camcorder to be controllable over a pre-existing wireless network. Thanks to UPnP, the iPhone and Android apps will find the camera automatically. But you can also enter the IP address into a Web browser and access the same set of controls that way. This Web interface also lets you configure settings, too. Using a DDNS service, it’s even possible to make the camcorder accessible outside your local network, so you can control it over the Internet. 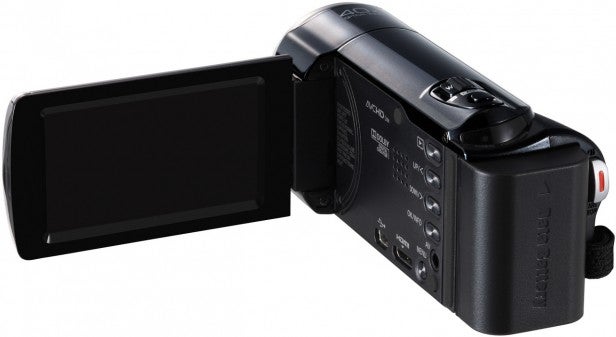 These are all pretty amazing features, particularly at this price, but the underlying camcorder is a little less exciting. The EX215 is based around a small 1/5.8in CMOS sensor with just 1.5MP, although this is back-illuminated so will perform better in low light than its size would imply. Video is recorded at a maximum of Full HD and 24Mbits/sec, although two standard definition options are also available. There’s a time lapse recording option, too, with intervals from 1 to 80 seconds possible, and a high speed recording mode for creating slow motion. The latter drops resolution, though, and the high frame rate necessitates a high shutter speed, so both image quality and low light performance are behind regular speed shooting. A single SDXC memory card slot is integrated for video storage, with no memory built in.

The EX215 is pretty limited when it comes to manual controls. JVC hasn’t made its usual level of functionality available here, with no iris or shutter settings on hand, nor even a basic brightness option. In fact, there isn’t a separate manual mode at all. Instead, a quartet of more automated touch priority settings are supplied, including face detection, colour tracking, area selection and even pet tracking. Indeed, there’s a whole separate pet mode especially for those who like to make videos of their furry friends. 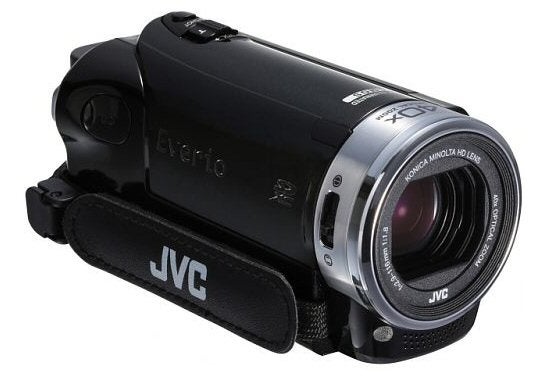 Image quality is relatively mediocre as well. In the best conditions, there’s a slight lack of detail if you look closely at the picture, but colour reproduction is good. The image remains reasonably bright down to relatively low levels of illumination, but the white balance is a little off and there’s further loss of detail, although video noise isn’t particularly evident. Overall, performance is competitive for a camcorder in this price range, but not exceptional.

The HD Everio GZ-EX215 is another curious mix from JVC. On the one hand it’s a low-end camcorder with reasonable but not outstanding image quality, and somewhat limited manual configuration. But on the other hand, the wireless facilities are unique and mostly work well, once you have waded through the complicated setup screens. Fortunately, with a price that’s well under £300, you’re not paying a huge premium for the latter. So if you do fancy a budget camcorder that can masquerade as a sophisticated wireless surveillance device, the EX215 has some pretty unique capabilities.