This is a large, heavy camcorder for its class, weighing in at 900g and measuring 231mm along its longest edge. But it’s packed with discrete manual controls. For a start, there’s a lens ring, unlike the Canon LEGRIA HF S10 released a couple of years ago and S20, although last year’s LEGRIA HF G10 brought this feature back. The ring can be set to operate zoom or focus using a switch on the rear of the camcorder.

However, the G30 goes one step further still. Next to the lens ring is a dial that can be given a variety of functions via an adjacent customisable button. There are five other customisable buttons dotted around the chassis, although the two on the edge of the LCD toggle manual focusing and PRE REC by default, and the one beneath the LCD to the rear is the menu back button.

You can configure these to have a variety of alternative functions, and there are two more on the rear of the camcorder. As well as the 3.5-inch touch-screen LCD, there’s a joystick on the rear, and a function button. Overall, the G30 has more discrete control options than even the Panasonic HC-X920, which does the G30’s credentials no harm at all.

There are numerous manual settings available, starting with the option to switch from Auto to programme auto, shutter priority, aperture priority, fully manual or one of the nine scene modes. You can also opt for a Cinema mode with nine filter options, from a standard look to vivid, dreamy or black and white. This mode doesn’t let you use the image effects, but you can still choose the same modes as in manual operation, except for the scene options.

Speaking of the image effects, these allow you to adjust colour depth, sharpness, contrast and brightness manually in five steps between -2 and 2. Programme auto gives you a basic exposure setting, whilst the other options variously enable shutter speeds from 1/2 to 1/2000th, apertures from F1.8 to F8, but there are also ND filters from 1/2 to 1/8 within the range, and video gain up to 18dB is available separately too.

The G30 has not one but two accessory shoes. One is the proprietary “S” Mini Advanced Shoe, so compatible with the Canon accessories used across the consumer range. This is protected by a plastic cover. But there is also a standard-sized accessory shoe towards the front of the device, so you can attach third-party microphones, lights, and other attachments.

There are minijacks for headphones and an external microphone. About the only feature separating the G30 from entry-level professional camcorders is the lack of XLR audio connections. There’s even a 2.5mm LANC minijack for wired remote control, although no analog video input is provided. You probably won’t want to use the LANC connection, as there are numerous other options for remote control, starting with an infrared controller supplied in the box.

However, the G30 also follows current trends, and has Wi-Fi built in. There is no dedicated Android or iOS app, and the G30 isn’t compatible with the apps for the lower-end LEGRIA camcorders. Instead, the device serves a website of its own which you can point your smartphone or other device at. This presents a live preview, although over WiFi it’s rather delayed. 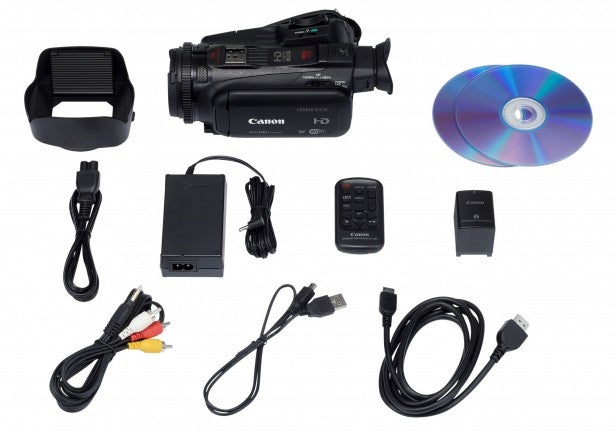 In Basic mode, the control website lets you zoom in and out as well as toggle recording. In Advanced mode, you can also adjust focus, iris, shutter and video gain. Overall, there is a very useful level of control available here, although the Advanced mode is rather fiddly on a smartphone, and is better suited to a tablet. The G30 has GPS support, too, but only with an optional GP-E2 accessory that is also compatible with a selection of EOS digital cameras.

The G30 provides image quality as you would expect for a camcorder at this price. Colour and detail are stunning in daylight conditions, with the G30 coping well with the high contrasts created by the uncharacteristically sunny summer we have been having in England.

Low-light performance is also exceptional, with bright and grain-free footage captured at low levels of illumination. Our 100W ceiling light test was no match for the G30, and although Panasonic’s HC-X920 slightly shades it for sheer low light performance, overall the G30 provides professional-grade image quality.

Should I buy the Canon LEGRIA HF G30?

If you’re serious about your videomaking, and don’t want to pay the £2,000-plus required for an entry-level professional camcorder, the Canon LEGRIA HF G30 would make a very valid choice. It has the most manual control options of any current consumer camcorder, and until camcorders with DSLR-sized chips like Canon’s EOS C100 hit the sub-£1,500 category, the G30 is well worth considering for event and corporate videography, teaching, or as a secondary crash cam.

The Canon LEGRIA HF G30 may be pricey, but it offers the best range of manual controls in any consumer camcorder, and excellent image quality.