Available on PS4, Xbox One (versions tested) and PC

Call of Duty: Infinite Warfare arrives in a very crowded marketplace surrounded by competition. Never has the FPS genre had so many quality games launching in such a short space of time. Usually, CoD arrives like any cool kid to a party; fashionably late and steals the show. Unfortunately, despite a stellar campaign and outstanding visuals, Infinite Warfare not only fails to go toe-to-toe with 2016’s best bangers, but can’t even compete with its own stablemates, most notably the one that comes bundled in the £70 box.

While the Call of Duty series has become synonymous with intense and addictive multiplayer, it’s a pleasant surprise that the quality of the single player campaigns has steadily improved in recent years, which continues in Infinite Warfare.

The general plot is simple: the human race simply couldn’t stop pillaging Earth, so branched out to the solar system to mine for resources in the galaxy (rather than learning to recycle). As the world united it formed the UNSA, but an evil splinter faction also formed: the Settlement Defence Front, led by Kit Harrington’s character.

Related: PS4 Pro vs PS4 – Which one should you buy? 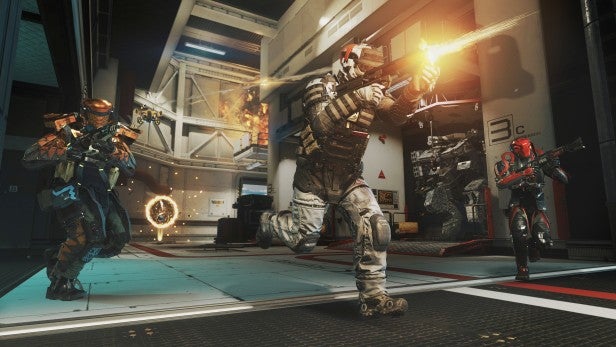 Unfortunately, the narrative itself is a bit thin, not helped by Harrington’s transient antagonist spending more time yelling at a small screen in the upper right of your HUD like an angry YouTuber than being an intimidating presence. The lack of a tangible ‘thing’ to fight against means the larger plot passes you by for long spells, but this is countered by excellent performances delivered by your squad, making the minute-to-minute dialogue entertaining enough to enjoy the ride.

E3N (Ethan) – the charismatic, cybernetic android – is a particular highlight throughout with genuinely funny lines and quips, and his relationship with lead character Nick Reyes can be surprisingly touching at times.

What helped keep me so engaged with these characters and made the campaign such an immersive experience is the near-complete lack of loading screens. Infinity Ward should be applauded for the way it has managed to mask load times behind in-game transitions, like Nick Reyes moving from control room to his fighter jet. It always keeps you ‘in the fight’ rather than sitting and watching a bar fill up – also known as the time to check Twitter.

The minute-to-minute gameplay is also excellent, with some subtle innovations making a big difference.

Fighting in Infinite Warfare’s tightly-structured environments brings its immensely satisfying combat to the forefront. Each gun fires with real weight and punch, making every encounter intense and engaging. There are also a number of subtle improvements which really make a difference. For example, the aiming reticule now uses a traffic light system which makes it much easier to know when you’ve killed a target. The reticule will flash white for a hit, yellow for gravely injured and red for the fatal blow. This helps alleviate the annoyance of the continued bullet-sponge enemies, as it’s now much clearer when they’re actually down.

There’s also some new weaponry at your disposal. Aside from all the futuristic guns and energy weapons, the most notable new toy is the seekers – lethal spider-like grenades which hunt down and latch onto the nearest target before literally blowing them to pieces. It can be incredibly visceral when a seeker grabs a human.

Related: Battlefield 1 vs Infinite Warfare – Which one is better? 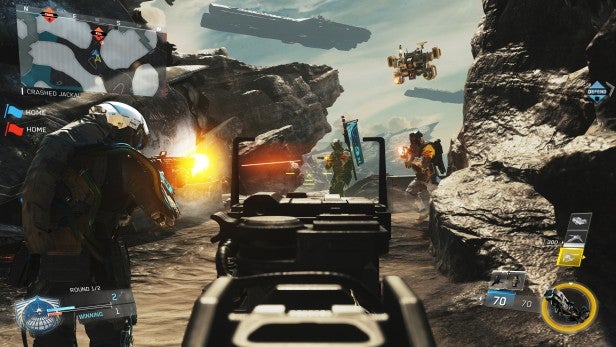 Another great addition is how the HUD informs you of the kills a grenade has gained. After a lethal explodes, the screen will display little crosses marked with “Kill” next to each enemy who died from the explosion, as well as yellow markers for any fatally wounded enemy, meaning you know where to aim to kill off the few remaining baddies.

The new space flight combat sections are also well-executed. Flying around in the UNSA’s Jackals is a bit like EVE: Valkryie on steroids; the action is so fast-paced at first it’ll be tough to keep up. But once you adjust to the frantic action, the combination of tight controls and freedom of movement within the battle arena makes for some very intense battles, helped by some aggressive and agile AI that put up some feisty competition.

It’s a shame that, despite the campaign’s excellence, the majority of gamers will barely touch it, jumping instead to the series’ crown jewel, multiplayer. It is then even more disappointing that this is the weakest it’s been since Call of Duty: Ghosts.

At times multiplayer can be as intense, thrilling and control-smashingly frustrating as the series’ best, but for the most part it’s mundane, uninspired and worst of all includes a fundamentally broken metagame the devolves into a painful grind.

Infinity Ward has taken inspiration from Advanced Warfare in its gun variety, but in its implementation of the same principle created a terribly imbalanced system that basically becomes pay-to-win.

In Advanced Warfare, each gun had numerous mods. These mods offered improvements to some stats and downgrades to others. For example, a submachine gun mod could have better range but worse stability. It’s a trade-off that ensures there remains a balance in the player-vs-player combat. No gun is ‘better’ – just different.

In Infinite Warfare, mods improve upon the base weapon with no downsides. Meaning that if I come up against somebody with the same weapon, but they have the upgraded mod, that person has the better chance of winning. For example, the “Epic” version of the ERAD SMG includes an under-barreled shotgun and an entirely additional weapon, as well as reduced recoil. 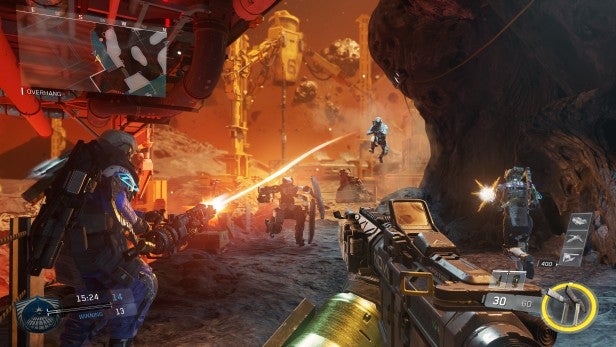 Also, with the way that salvage needs to be painfully grinded to be able to buy anything (it can take several hours to be able to afford a single gun upgrade), don’t be surprised if microtransactions don’t soon seep their way into Infinite Warfare. Salvage has already become a microtransaction of sorts, as players who purchase the season pass receive 1,000 of it. It’s an awful system that turns everything into a painful grind, except without any of the thrill of progression.

It’s tragic that the team that bears the name of the developer that revolutionised multiplayer shooters in 2007 can’t come up with a single novel idea of its own. Instead, Infinity Ward rehashes concepts implemented either in previous CoD entries or other franchises, and fails to do so with anywhere near the same level of finesse.

The RIGS system doesn’t have the same character as Black Ops 3’s Specialists, let alone Overwatch’s plethora of iconic heroes. Each character type looks the same as the last: bland and uninteresting, with no backstory to give us any reason to invest in any of them. Wall-running is slow and actually leaves the runner at a disadvantage, making it far worse than seen in the likes of Titanfall. Grenade cook times and arc throws continue to be off, too. The list goes on to the point it makes me sad, because underneath all these issues is that same great multiplayer with some really intuitive map design.

Taking inspiration directly from MOBAs, many of Infinite Warfare’s maps offer a three-lane system, with choke points along each one. The colourful and quirky design of IW’s layouts may not be to everybody’s tastes but I really enjoy it. The verticality offered in each level is similar to that in Black Ops 3, though is far more restrictive than in the likes of Titanfall 2 – it feels as if you’re constrained by the gameplay mechanics rather than liberated by them. Often you’ll find yourself inexplicably unable to climb certain areas or reach certain paths, even though wall-running and your jetpack allow you to reach them.

The biggest stick you can beat Infinite Warfare with isn’t that it’s not as solid as Battlefield 1 or Titanfall 2, it’s that it is simply miles away from even the game that’s bundled with it: Modern Warfare Remastered.

There were many instances while playing Infinite Warfare I decided to quit and jump into a match of MWR because everything is stripped back. Modern Warfare’s beauty lies in its simplicity. Fewer unlocks, fewer upgrades, no game-breaking weapon alterations – just pure, superb multiplayer.

Over the years Call of Duty has tied itself in knots because each iteration has considered adding complexity as a means of evolution. Compare this to Titanfall 2 where, instead of adding hundreds of new ideas on top of what already existed, it dared to strip away parts of the original and refine, making for an better, more polished experience. It’s like loving Victoria Sponge cake, and thinking that the way to improve it is to stick another Victoria Sponge on top, and then you know what would make that even better? A third Victoria Sponge! It’s about time the Call of Duty franchise took a step back and considered less is more, proved as such by Modern Warfare Remastered. 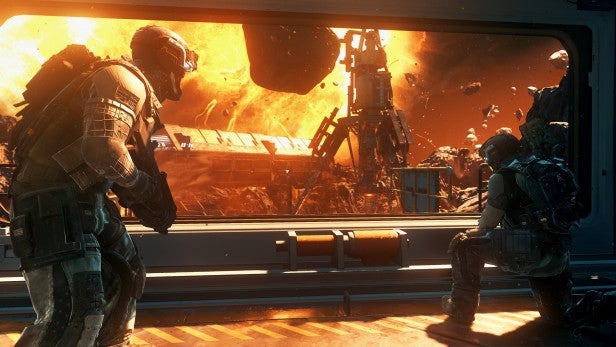 Lastly, we have Zombies in Spaceland, which feels a lot like its been put in the hands of the developers of Far Cry: Blood Dragon. The loving nod to the 80s wrapped around the excellent zombie horde mode is one of the best seen in the series. Characters are well acted, the map design is superb and the fact I can run around the excellent theme park while listening to 80s tunes mean I could spend a ton of time in there.

As a co-operative experience, it doesn’t feel like every unlock you work towards (it has the same keys and salvage grinds found in the main multiplayer) is as intrusive, as you’re not working to gain an advantage over another human opponent – you’re simply trying to get more guns to shoot zombie clowns with. As this grind feels additive rather than a necessity to achieve, the whole experience becomes much more enjoyable.#

I’m genuinely saddened that Infinite Warfare’s multiplayer doesn’t stack up to previous entries, as every year I look forward to jumping back into Call of Duty and spending a good few months shooting up stuff. The fact that another game comes in the box that is better than Infinite Warfare in almost every way is pretty damning. It’s still one of the best shooters ever made, but a game that has come out a decade later should still be able to compete.

A solid campaign and the excellent “Zombies” mode will see people stick around for a good while, but it won’t be long before buyers of the Legacy Edition switch over to Modern Warfare Remastered for good.